Available March 16 on PS4 and Xbox One

The meaning of the words ‘remaster’ and ‘remake’ seem to have lost all meaning in the games industry. Both have been used to describe minor spruce-ups of older titles, as well as being attached to games that have been given drastic overhauls from the ground-up, making them almost unrecognisable from the original.

Burnout Paradise Remastered, rather disappointingly, falls in the former category – but nevertheless it means one of the greatest and most fun open-world driving games has found its way onto modern consoles.

Burnout Paradise Remastered brings together all the DLC released for the original game, as well as whacking up the visuals to 4K on supported consoles and delivering 60fps across the board. Booting up the game, my mind played the classic nostalgia trick, by donning the rose-tinted specs and asking: “Hang on, isn’t this how it always looked?” It wasn’t until checking one of the trailers that I could appreciate just how much sharper Paradise Remastered looks, especially in 4K on the Xbox One X.

That said, there’s certainly no way to confuse Burnout Paradise Remastered for a modern game. The looks haven’t aged particularly well and in spite of the minor upscale, does indeed look dated. When you look at the gorgeous modern races like Forza Horizon 3, there’s simply no comparison. A lot of textures lack detail, and the darker colours don’t pop like you’d want. 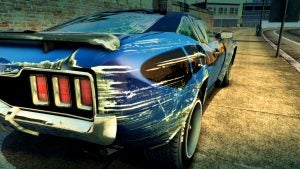 While it may lack the visual upgrades that grace the likes of Shadow of the Colossus, it doesn’t detract from the incredible fun there is to be had on the road. Also, the fact that you’re often travelling at absurd speed often helps distract from the blemishes.

Once you’re done staring at the visuals, it’s time to get to racing, which is as fun as ever and massively benefits from the framerate bump. With so much ‘stuff’ added to modern titles, Burnout Paradise’s relatively stripped-back simplicity is a breath of fresh air. It may have all of the same map icons of modern games – the different race types, the garage station, the junkyard, the billboard collectibles to smash and others – but the map is kept clean and you’re encouraged to go out and find everything yourself.

To get into a race, simply pull up to a traffic light and rev your engine. You don’t know if there’s a race waiting at the traffic light before you pull up to it; you just have to try it out first. Then there’s the collectibles, not discreetly hidden throughout Paradise City, but shining bright all over the map in neon lights, with the challenge coming from how you get up there and smash them to pieces.

This simplicity extends to races, too. Once you know points A and B, there’s no arrow on the ground guiding your way, you can get to the chequered flag any way you choose, with fewer invasive nudges and winks suggesting the best way there. As you approach an intersection, the game will tell you the name of the street, to the left or right, which you should take, and your indicators will blink to hint that your turn is approaching.

At first this takes some getting used to – taking your eyes off the road for a split-second to check the map or the top of the screen for upcoming turns – but once it clicks and you’re doing it subconsciously, the racing becomes far more enthralling. 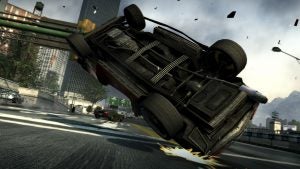 Burnout Paradise also strikes the perfect balance in its handling of the cars. Every car carries enough weight to feel like its wheels are definitely planted on the tarmac (except when you’re flying through the air, of course), but they also possess an RC-like quality that means you can throw them around corners with a deft touch that allows for the sort of reckless driving that makes Burnout so fun.

This simplicity, however, does come with drawbacks. Paradise City may not be the biggest map in the world, but it’s still a pain if you have to drive from one side of town to the other outside of races. There’s no fast travel, and you can’t set a waypoint on the map to find your way, either.

You also have to drive all the way to the junkyard every time you want to switch vehicles – and considering the amount that are in this game, it really dampens the excitement of tinkering in the garage when you have to go so far away from a race to change motors. It also means you tend to skip race events not tailored to your car, with all vehicles divided into Speed, Stunt and Aggression categories.

Also, again, as this is a game that wants you to find your way, while learning all the different shortcuts and alternate paths, there’ll be times where you’ll take a wrong turn, ruining a race in the process. And there isn’t a quick option to restart it. Instead you have to painstakingly find your way back on the race path, and hobble over the finish line, often in last place.

Once again this includes the content from all eight previously launched expansions for the game. That means over 150 vehicles, including cars and bikes, all the extra challenges and ten tracks. They’re all unlocked from the beginning, too, which to be honest can take away some of the thrill of those opening few hours unlocking new cars as you upgrade your licence. But you can always choose to ignore the super-high-end cars until you feel like you’ve earned them, right? 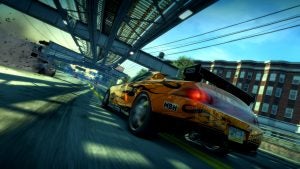 While the racing is superb and the cars great, special mention is reserved for the soundtrack. Paradise’s song list is one of the few that can rival the Tony Hawk’s Underground and GTA series for wall-to-wall hits that perfectly fit the game. Yes, I include Avril Lavigne’s ‘Girlfriend’ in that hall of fame. It’s a soundtrack so fitting of the time of its original launch a decade ago that anybody who was around back then will immediately become their angsty selves once again, and anybody new to the game is far enough removed from the songs for all of them to be classics.

It may not be the ground-up remake that other modern classics have been treated to, and you will likely be left disappointed at the minor overhaul the visuals have been given, but this is still a superb open-world racing game that feels like it’ll be loved by fans of the original as well as new players jumping in for the very first time. It may sound cliched, but they simply don’t make them like this any more.

Now you’ve read our review, why not check out some of our other articles, like:

Everything we want from Forza Horizon 4

Did you play the original Burnout Paradise? What are your thoughts of the Remaster? Let us know on Twitter and Facebook