How much does it cost to get your PC Oculus Rift ready?

Oculus VR has finally unveiled its first consumer-ready Oculus Rift virtual reality headset, and you can even pre-order one right now. Priced at £499 ($599 USD) the headset comes complete with everything you need to get your virtual reality game on. All, that is, except for a PC to actually power it.

While many of you may be thinking that’s no big deal – it’s just a jumped up monitor isn’t it? – the reality is the Rift will require some serious horsepower to run it well. With two screens both packing 2160 x 1200 pixels and running at 90Hz (most non-gaming monitors run at 60Hz) you’re looking at the latest high-end components to fill all those pixels fast enough.

So to help you get your head round just how much you’ll likely need to spend to make the most of your Oculus Rift we’ve browsed the shops and put together a shopping list of what we think will be the best PC components to buy and how much they’ll set you back. 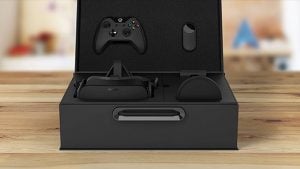 Oculus has specified that the minimum level of components you’ll need to provide the 400 shaded pixels per second it needs to fill those two peepers of yours is as follows:

The first point to note is that anyone thinking of using a laptop to power their Oculus Rift is likely out of luck. As Oculus points out:

“The last bullet point is tricky: many discrete GPU laptops have their external video output connected to the integrated GPU and drive the external output via hardware and software mechanisms that can’t support the Rift. Since this isn’t something that can be determined by reading the specs of a laptop, we are working on how to identify the right systems. Note that almost no current laptops have the GPU performance for the recommended spec, though upcoming mobile GPUs may be able to support this level of performance.”

That leaves us reliant on desktop PCs so as well as the above CPU, graphics cards and RAM we’ll need a compatible motherboard with the appropriate number of USB ports, a power supply, a hard drive or SSD, a case and a copy of Windows. This is what we came up with:

The most obvious thing about this minimum spec is the huge price disparity between the GTX 970 and R9 290. While the GTX 970 is certainly a faster card – as we found in our GTX 970 vs R9 290 comparison – it’s not that much faster and clearly if Oculus VR thinks the R9 290 is up to the job then it would be the obvious choice to save money.

Either way, thanks to most of the minimum-spec hardware being a generation or so behind the current top of the range, you’re looking at a perfectly reasonable £600 or so to get a complete system, minus a keyboard and any other peripherals of course.

If you go for the R9 290 option and already have a suitable case and power supply then you could even be looking at your total outlay being under £1000, including the Rift itself.

While the above system will meet Oculus VR’s minimum spec and deliver on its promise of “games and applications [providing] a great experience on this configuration by default”, to really get the most from it you’ll want to aim a little higher.

The single most important upgrade will be the graphics card. While the GTX 970 is already a very powerful card, the GTX 980 Ti and R9 Fury X deliver even greater performance. Indeed right now they are, in all practical terms, the pinnacle of performance without jumping up to two graphics cards.

You could get away with just swapping the graphics card and being done with it but I’d recommend that if you’re building a system especially to make the most of the Rift you make the leap to the latest Intel processor platform.

That means buying a 6th generation Intel Core i7 or i5 processor such as the Core i5-6400 or 6600k. That will also mean a newer motherboard and new DDR4 RAM.

Meanwhile I’d also recommend upgrading your storage to include a minimum of a 128GB SSD to make for fast game and level loading, as well as a reduction in mid-game stutter as portions of the game are loaded into memory. With that new motherboard you can even opt for the latest super fast PCIe NVMe M.2 SSDs.

The result of all those tweaks is that this is my recommended Oculus Rift system:

That’s quite a pricey system, no doubt, but around about the £1000 mark has long been the amount you need to spend to get a high-end gaming system, which ultimately is what’s required here.

Of course there’s plenty of scope to spend even more. More RAM, an Intel 6600K or 6700K, a larger SSD, a snazzier motherboard, after-market CPU coolers plus of course you can considering going the multiple graphics cards route.

So will you be buying an Oculus Rift and will it be the excuse you’ve been waiting for to finally overhaul and upgrade you gaming PC? If so, what will your shopping list look like?