First-person shooters need to be so much more than what they once were. In the space of around two decades, it’s a genre that redefined the entire games industry simply by pointing and shooting at stuff to requiring jetpacks, wall-running, zombies and skyscraping titans in order to keep our ever-dwindling attention spans interested in its twitch gameplay. But it’s taken one of the godfathers of the genre to return and cut through the noise to offer a simultaneously simplistic and immensely enjoyable shooting experience in the form of Quake Champions.

I’ll admit, as someone who games primarily on a controller, I was a little hesitant jumping into the Quake Champions beta. I look at a mouse and keyboard when playing a game in the same way my mum looks at her smartphone when it does something she doesn’t expect: with desperate confusion.

Mercifully, Quake Champions uses an incredibly simple control scheme that even PC novices such as myself can quickly get to grips with. Weapons can be switched by scrolling on the mouse, WASD is to move, and look by moving the mouse. There are other buttons, but Quake moves at such an unreal pace you won’t ever use them. 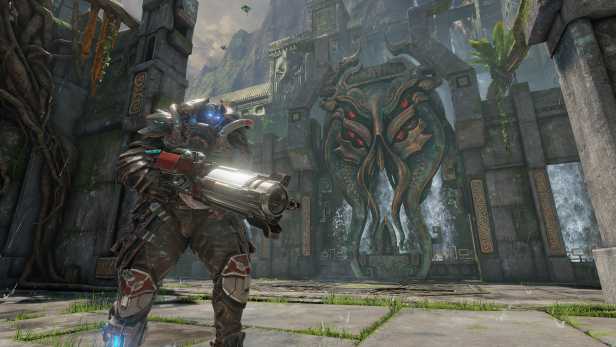 There isn’t a faster first-person shooter on the market than Quake Champions. Titanfall 2 offers incredible speed and fluidity thanks to its exploration of the battlefield, but nothing comes close to Quake’s raw sense of absolutely gunning it around the map. Even the slowest Champions on the roster – such as Clutch, an autonomous robot – are nifty enough to run around at lightning-fast speeds. But, remarkably, I always maintain a sense of control, keeping abreast of the situation before me. It’s almost inexplicable, but amidst all the hyper-speed chaos, everything makes sense.

It’s a testament to developer id Software that Quake Champions operates at such incredible speeds, but feels more manageable than most shooters. This feels like the classic Quake of the good ol’ days.

There are three maps in the beta: Blood Covenant, Ruins of Sarnath and Burial Chamber, and all feel brilliantly designed with plenty of choke points for players to converge, but also with excellent placement of weapons to both run around and collect; there’s also opportunity to get into some trouble on the way.

Each match is preceded by a 30-second ‘warm up’, which is the perfect chance to check out where the rocket launcher, nail gun and other weapons are littered in the map. There’s no mini-map on the screen, meaning you have to learn where everything is.

Thankfully, each map offers brilliant iconography, making every location familiar and recognisable. Want to get the rocket launcher? Oh, that’s on the top of the altar by the central chamber. Want the body armour? Follow the church altar right to the top. Placing weapons and armour in areas with recognisable points means paying attention to the surroundings is of great benefit. 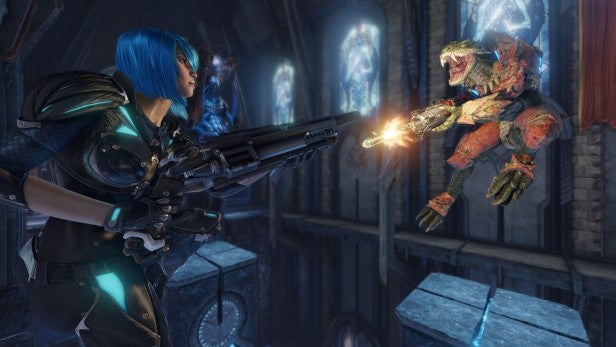 It’s a huge breath of fresh air from the bland greys and browns of modern shooters, too. Going all out with design means these maps are instantly more familiar to me.

Each of the Champions also offers something different in the form of their unique abilities. Each has a super-move that can be activated after a timer winds down (you can speed this up by collecting sand timers found throughout the map).

Ranger, for instance, throws an energy ball that detonates if it hits anybody, but he can also teleport to it should he want to escape danger or move into the middle of the fight. Nyx can temporarily be invisible, then reappear as soon as she starts firing bullets; Anarki can fully recover health, while simultaneously giving a small but permanent boost to his health.

Each Champion also has different health, armour and speed stats, so learning which one is your preference based on your own play style is part of the fun. At first I stuck with Clutch, who offered the highest health and armour but was the slowest, before becoming more comfortable with the game and moving onto Anarki.

However, while the game itself is delightfully simplistic, it is the free-to-play systems that run the risk of becoming overly convoluted.

Presenting itself as a free-to-play game, Quake Champions is probably more aptly described as “free to start”. Yes you can, technically, enjoy the game to your heart’s content without spending a penny. Maps and modes can be enjoyed for free, and everyone can use the first Champion, Ranger, for free. Additional Champions can be rented for 24 hours by accruing enough in-game currency. 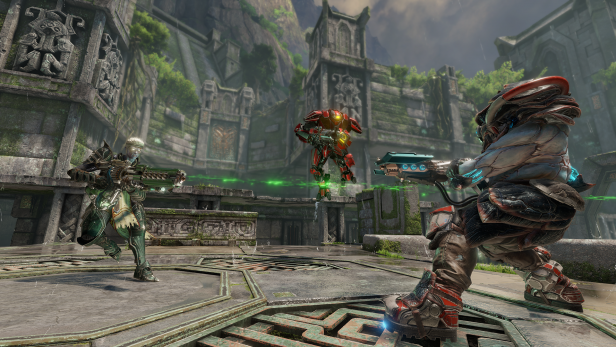 There are three forms of currency in play at any one time: Platinum, which is bought with real-world cash; Favour, which is earned in-game and can be spent on Champions and certain loot boxes; and Shards, which are earned by dismantling duplicates.

Backpacks are a little more confusing. You can earn these by playing matches and completing objectives, but the majority of them will need to be bought, particularly as you progress through higher levels and unlocks become fewer and further between. Each of them includes skins and gear for Champions.

There are also three tiers of loot boxes: Backpacks, Chest and Reliquary. The latter couldn’t be unlocked with Favour, and had to be bought with real cash or as an unlock via level progression. As someone who has never cared about character skins, this section really didn’t interest me, but it did add another layer to these already complicated F2P systems.

Naturally, if you want to make the most of what’s unlocked in the loot boxes, you’ll need the Champion to don them. It makes the whole cycle a bit of a chore and almost overly forcing the players hand to invest.

In my time with the beta, it didn’t take long to earn enough Favour to be able to rent a Champion for 24 hours, provided I won enough matches. The payout for victory is significantly higher than that of losses, so if you dont’ plan to shell out to play the game, you better be good.

Also, some game modes will require multiple Champions to take part. In the first round of the beta, only Deathmatch and Team Deathmatch were open; Dual was unlocked the following week. Dual sees two players select three Champions and face-off in one-on-one elimination. Naturally, if you’re renting Champions, this would be a costly endeavour.

I really hope the monetary system doesn’t become overly confusing and interfere too much with the core game – and at the moment, it doesn’t seem too. The trouble is, too many systems are in play, since it’s clear that Bethesda is trying to make money both from core gameplay features such as additional characters as well as skins via loot packs.

Quake Champions’ gameplay is excellent. It’s fast, frantic, and the constant action makes it instantly enjoyable and gratifying. This is a return of a great that fans of the older games will instantly love – and even younger players will almost certainly enjoy it, thanks to its incredible speed.

However, the free-to-play mechanics are almost too abrasive at times. Outside of the matches themselves, the game is almost constantly reminding you to spend something – be it Favour or real-world money. It wasn’t revealed in the beta how much real-world cash will translate to the cost of buying one or all Champions, but I’d almost prefer this game launch with an up-front fee and far less nickel-and-diming.

By offering so many monetisation schemes it makes me less inclined to spend, which is a huge disservice to how good the gameplay is. I want to play it, and based on this beta I’d absolutely want to buy it. I just hope it’s simple for me to do so.