What is the Pure Move T4?

The Pure Move T4 is a “pocket” DAB radio. Think coat pocket, not jeans pocket, though; because it has a speaker on its front. And unlike the Roberts Sport, it isn’t only a speaker designed to relay sports results.

A price tag of £99 might initially seem quite a lot for a small radio. However, the Pure Move T4 also has Bluetooth, an easy-to-use interface and sound quality that’s far better than expected given how slim it is.

This is our new portable DAB radio of choice. Even if there aren’t all that many to choose from. 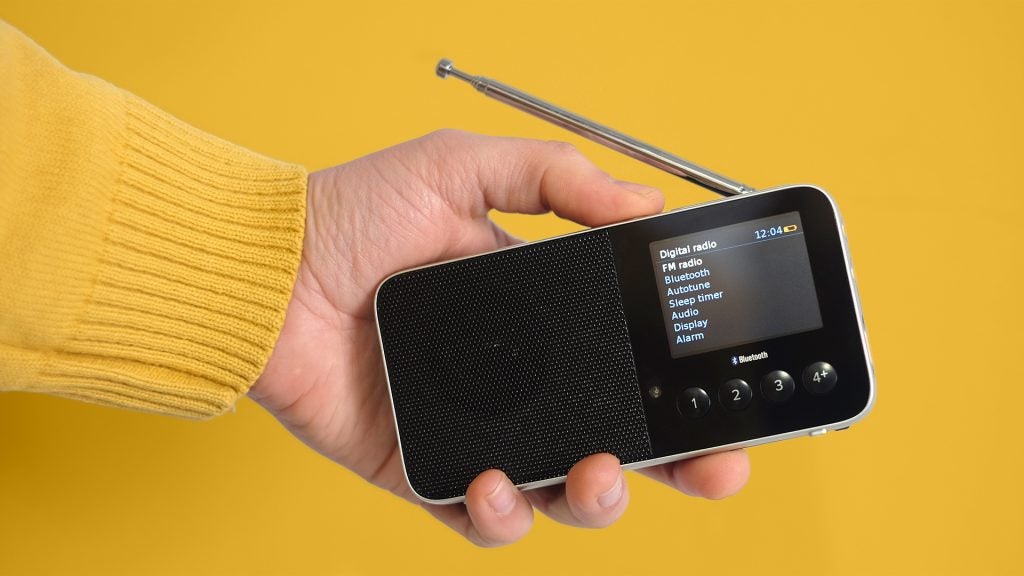 The Pure Move T4 is a pocket DAB radio. I can fit it in my jeans pocket, comfortably so in the back pocket, but I probably wouldn’t walk around with one in there every day like I might a Move R3.

If I was after a DAB radio to use with headphones, I’d buy the Move R3 instead. However, when you consider the Move T4’s portability given the inclusion of a speaker, it’s fantastic. The Move T4 is radically more handy than the average portable Bluetooth speaker. 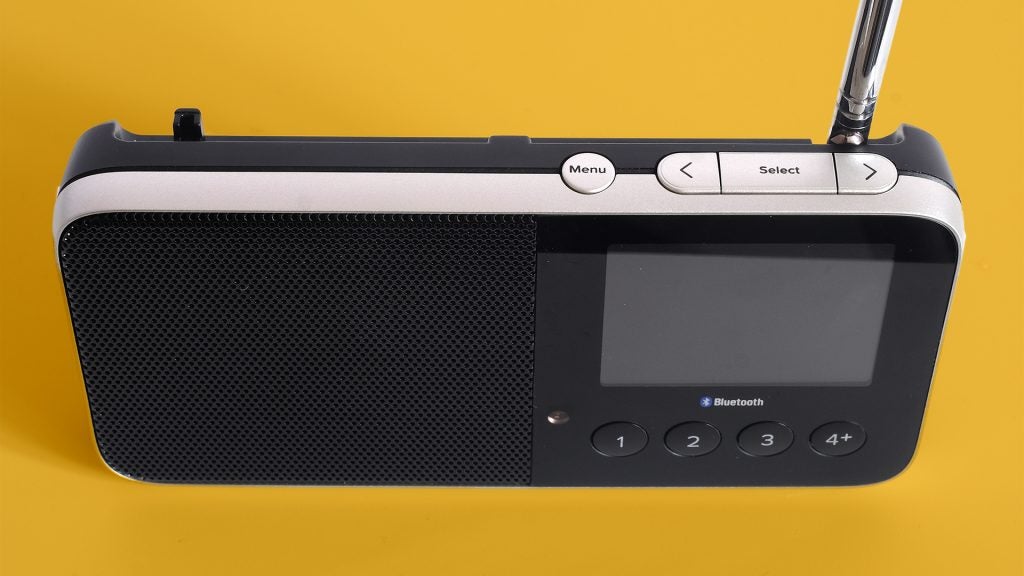 It weighs just 190g (again, similar to a phone) and is dwarfed by the Jam Heavy Metal speaker I tend to recommend to most friends. The Pure Move T4 is so light, with a pragmatic shape, that its convenience rating is through the roof.

There are just two hardware disappointments. It doesn’t come with a bag, which would have been useful, and it lacks any form of ruggedisation. There’s zero water-resistance, and an uncovered micro-USB charge socket on the rear makes me worry about even a light rain shower.

The Pure Move T4 is mostly plastic, but the front speaker grille is coated metal and the panel covering the screen is glass. This is welcome, since plastic display coverings tend to pick up scuffs and scratches quickly, which can spoil the overall look within days. 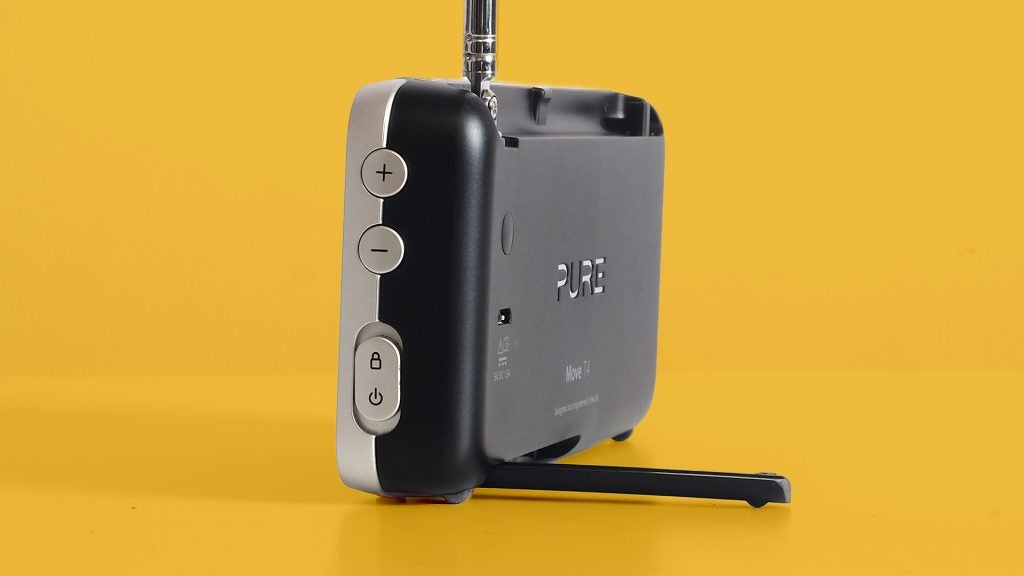 Sit the Pure Move T4 on a flat surface and it will stand up unaided, but it also has a plastic foot that swivels out from its rear that acts as a support. This is handy if you want to sit the radio down on some grass. It also helps balance the radio when you pull out the telescopic aerial.

Days out in the park, a festival or a UK camping holiday feel like natural environments for the Pure Move T4.

The T4 is button-operated, and all are clearly labelled. A set on the top lets you access the menu and switch between sources. A pair on the side alters volume, and with the four buttons on the front you can access your presets. You get 10 presets for each of the DAB/FM tuners. Three of your top picks get their own dedicated button, while the others appear on-screen when you press the ‘4+’ button.

A slider on the side also lets you ‘lock’ the Pure T4, so you don’t accidentally change the station. 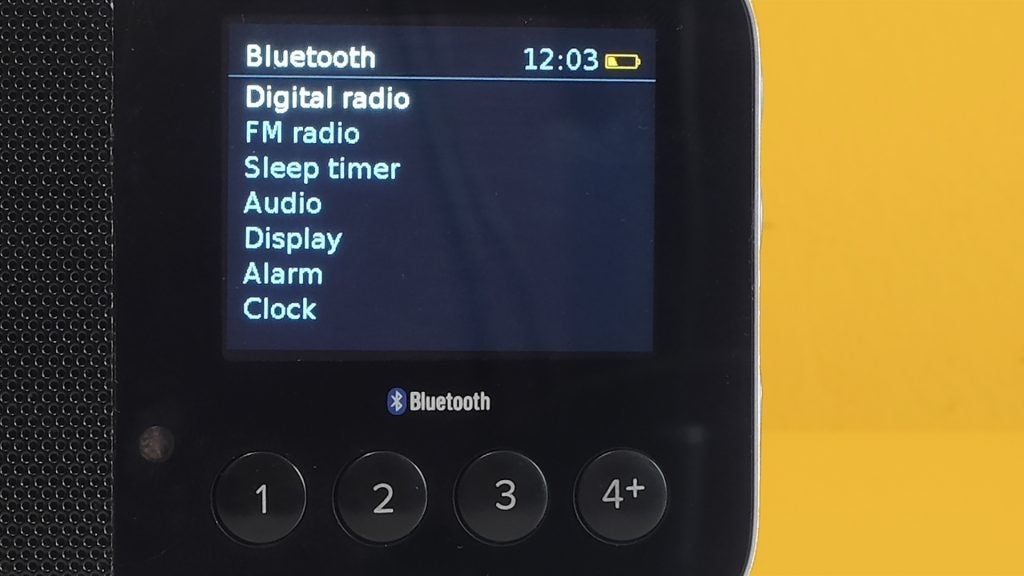 The radio’s screen is a square colour LCD. It’s clear and bright. But nowadays, since high-quality screens can be found on even cheap phones, I wonder if the T4 would look better with one of the monochrome OLEDs Pure uses in some other radios.

The LCD appears slightly recessed and the screen’s colour is used to highlight low charge in the battery and make mode selection look a little fancier. It’s a minor point, though, and there’s an ambient sensor on the front to let the backlight suit the light level. 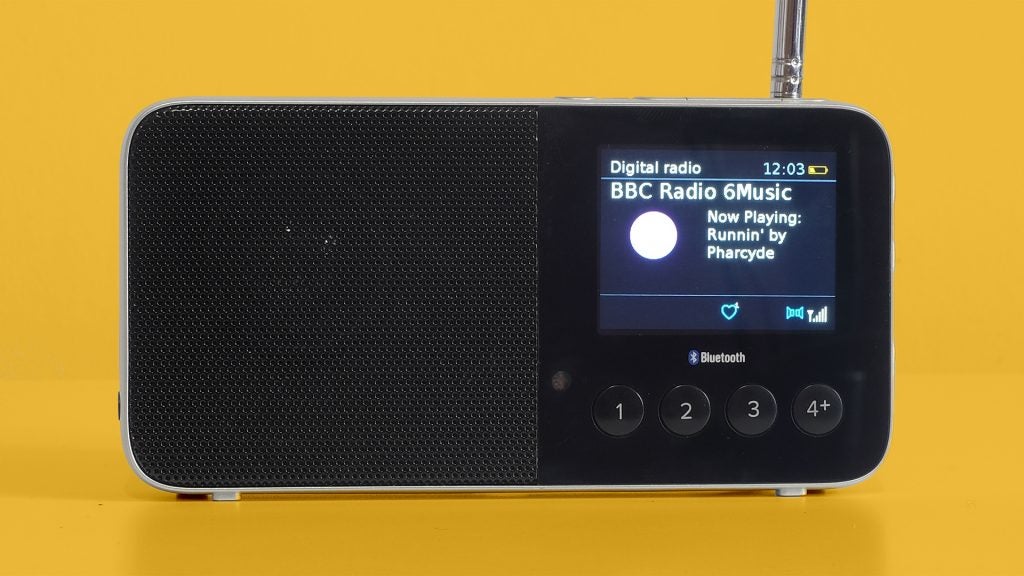 Bluetooth also snatches back a modern sensibility for the Pure Move T4. You can stream any audio from your phone to the radio, including podcasts, Spotify and the audio from apps such as YouTube. Since the sound is better than any phone speaker, you could even use it as a way to make a Netflix movie sound better.

When using Bluetooth, the buttons up top switch to become playback controls – a great little extra.

Pure says the T4’s battery lasts for 22 hours. However, this figure refers to use with earphones. Use the speaker alone and it will last for 15 hours. In my experience, the stamina is lower at high volumes, but you’ll still get around 10 hours’ use.

Since the T4 has a micro-USB charge port, you can use your phone charger to power up an external battery to give the Move T4 a top-up. 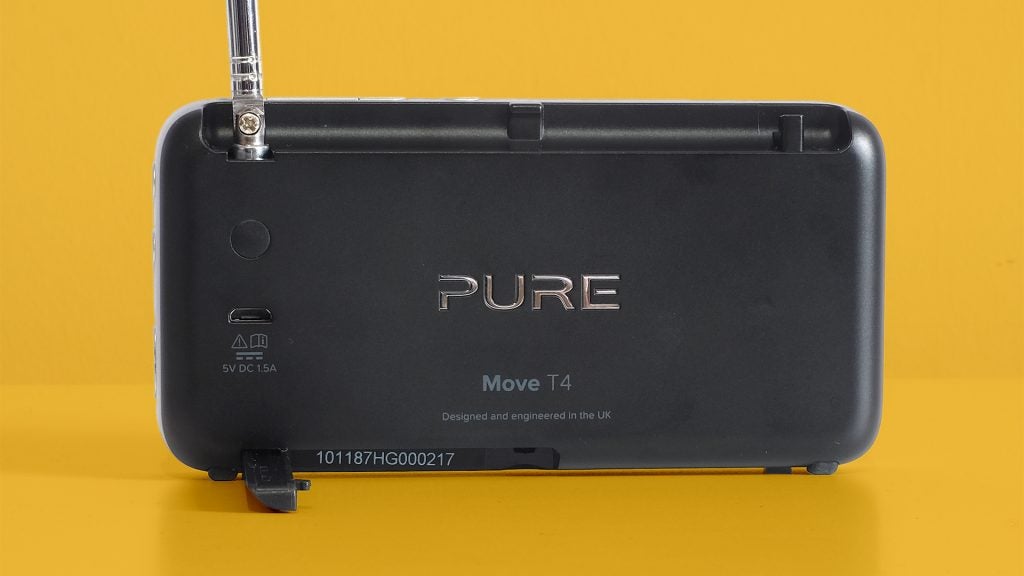 How good can a pocket radio sound? The Pure Move T4’s audio impresses, particularly since most of its larger DAB radios have lagged behind standalone Bluetooth speakers.

However, before we get to the praise, bear in mind it doesn’t perform as well as a bar-shaped wireless speaker such as the Denon Envaya Mini, which sounds larger, clearer and more powerful. It doesn’t even come close.

Pure hasn’t revealed the size of driver in the Move T4, but my tape measure says it’s roughly 1.4 inches across. And for the size, its amp has an impressive 4W RMS of power. 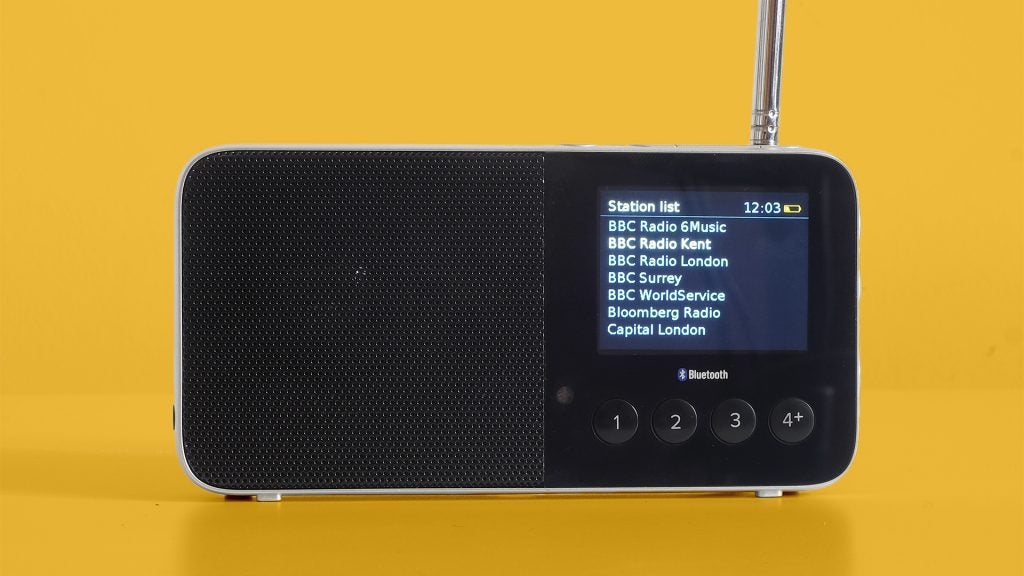 The sound offers some bass; it’s light but definitely present. That’s the real difference between this and most other pocket radios with integrated speakers. I see this type of device attached to the ear of an uncle at a wedding, who can’t bear to miss the sports results. Such units tend to sound tinny and scratchy. The Pure Move T4 doesn’t.

Music sounds good through this radio. There’s a half-spoonful of bass, some mid-range definition and no harshness or transistor radio scratchiness to the treble. Performance for its size is excellent. 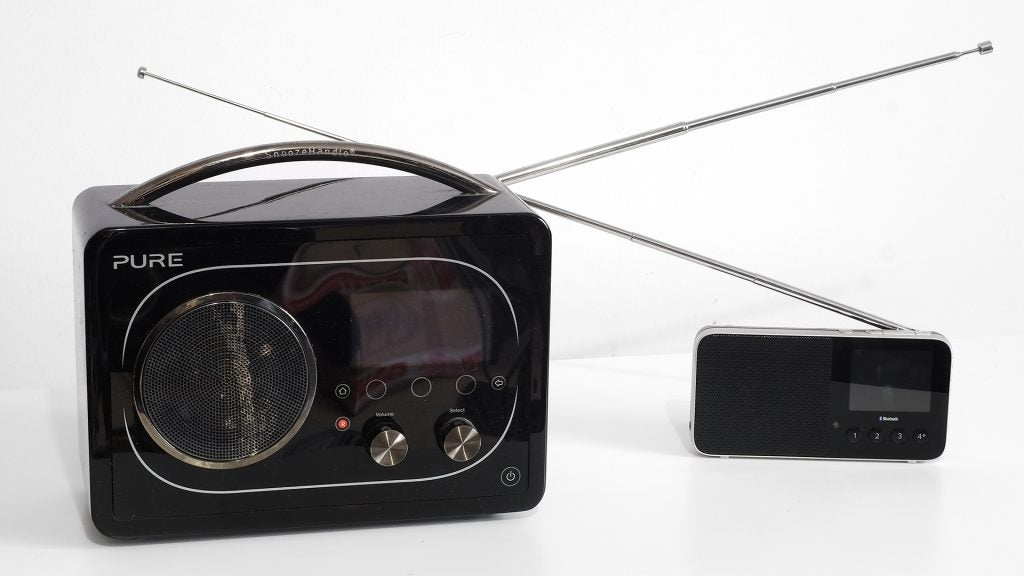 I’ve spent hours listening to BBC 6 Music and Radio 4 through the More T4, far more than was necessary for this review. It’s a very enjoyable little radio.

There are also a few different sound profiles. Some are just EQ modes, but there are also Personal and Outdoors settings that play with the volume and loudness. Personal limits maximum volume, but actually offers the cleanest sound quality; the Pure T4’s driver doesn’t have to push its projection, which makes the mids easier on the ear.

Using the “full volume” modes you’ll see volume peaks of around 83dB at a distance of 10 inches. That’s sufficient to take on the noise of a kitchen or fill a hotel room reasonably well. 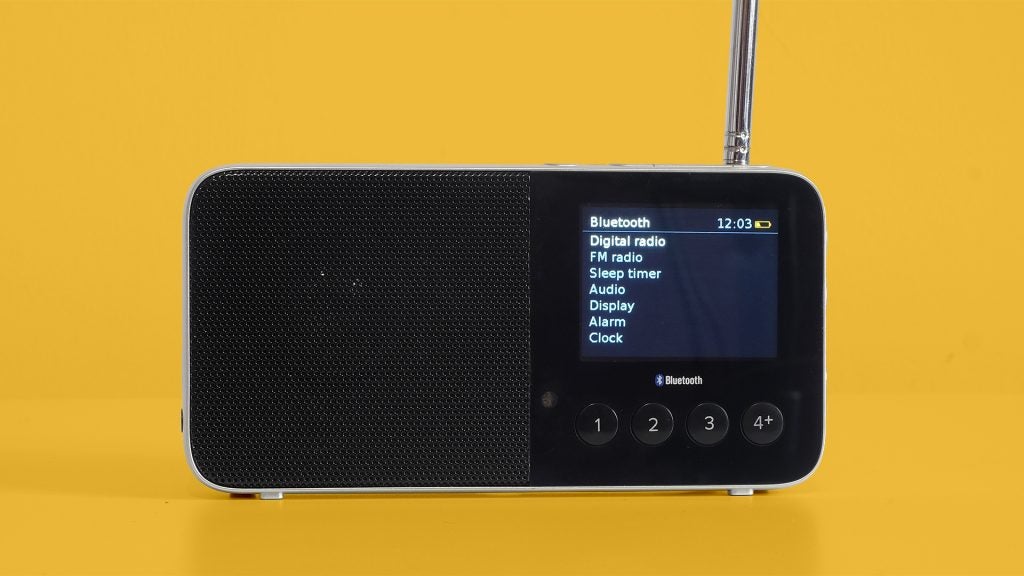 Why buy the Pure Move T4?

Want the very best radio sound quality you can get for around £100? You’d be better off with a standalone Bluetooth speaker and internet radio streamed through your phone’s mobile internet. The Jam Heavy Metal, and Denon Envaya Mini and UE Boom 2 are all good options.

However, none of the above can really compete with the simplicity and convenience of the Pure Move T4. It’s a true standalone unit; it’s just 2cm thick; and has Bluetooth for those moments when you do want to stream from your phone.

Its only compelling rival is the Sony XDR-P1DBP, which doesn’t have Bluetooth.

The pocket DAB radio to buy – it’s as simple as that.