What is the Denon Envaya?

The Denon Envaya is a portable Bluetooth speaker. It’s part of Denon’s new range of three simple Bluetooth units for those who want music for holidays. Or, perhaps, just a speaker to move from room to room at home.

It arrives just as every home speaker is beginning to offer support for the Amazon Alexa or Google Assistant smart home “AIs”. But the Envaya has a killer strong point: its sound is better than just about any speaker of the same size.

In this review, we’ll focus on the £149 full-size Denon Envaya DSB-250BT; but later on we’ll also dig into the more baggage-friendly £115 Envaya Mini to see how it compares. 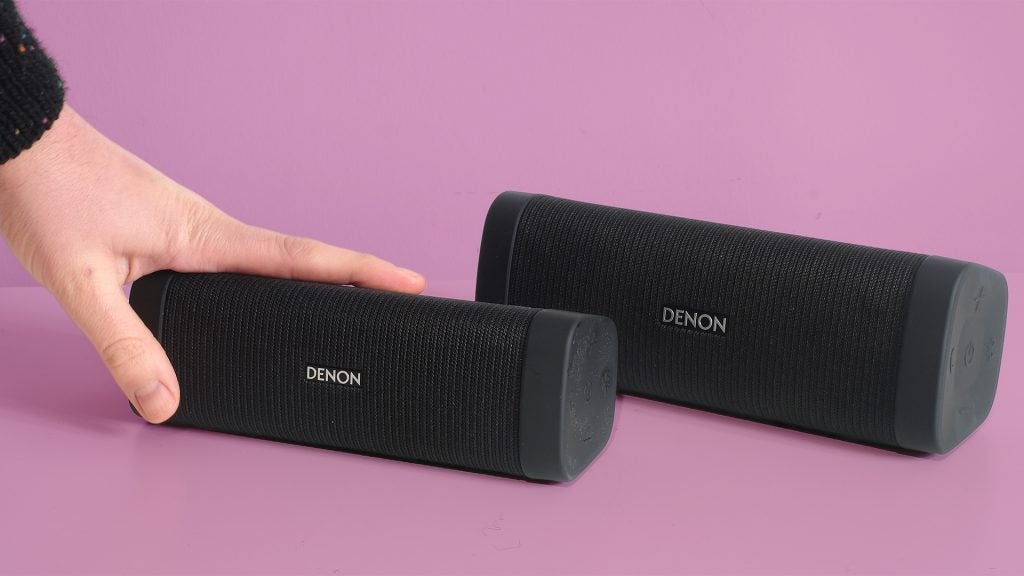 The Denon Envaya is a portable, bar-shaped Bluetooth speaker. I’ve changed my opinion about this category more than almost any other over the years.

In the past, many units I’d come across sounded only average, and most were too expensive. Nowadays, plenty sound good enough to act as your main music source. Granted, this may not apply to those of you raised on floorstander speakers from Richer Sounds.

Denon originally launched the Envaya range in 2014. This largest speaker looks nothing like the “desktop” speaker it replaces. It’s highly portable, but larger than most bar speakers. This is quite a deliberate decision on Denon’s part, since the Envaya Mini and Pocket are available for people who want a smaller unit. 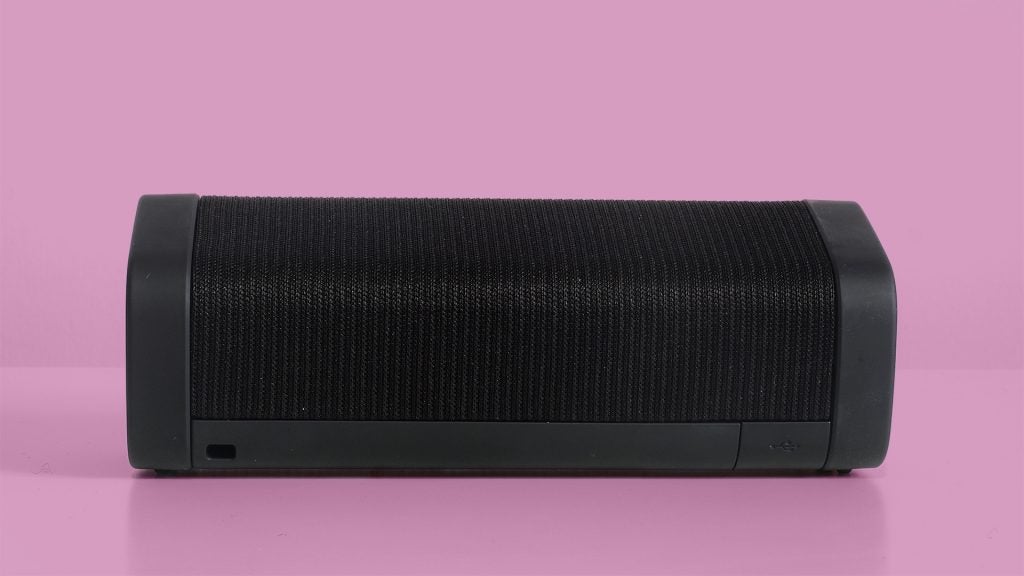 This full-size model is 21cm long and weighs 750g. It isn’t a monster, but may prove a bit much for a tightly packed travel bag.

The design doesn’t chase the under-25s lifestyle crowd. The look is moody and black, but otherwise neutral. Its sides are a chunky rubberised plastic. The grille that curves around almost all of the central part of the unit is fabric, and it wouldn’t look too out of place on the front of a hi-fi speaker.

IP67 certification means the Denon Envaya is both “water- and dust-proof”; it will happily survive being submerged in water. I wouldn’t have assumed it was quite this rugged on first laying eyes on it. Just make sure the battery cover on the bottom is in place. 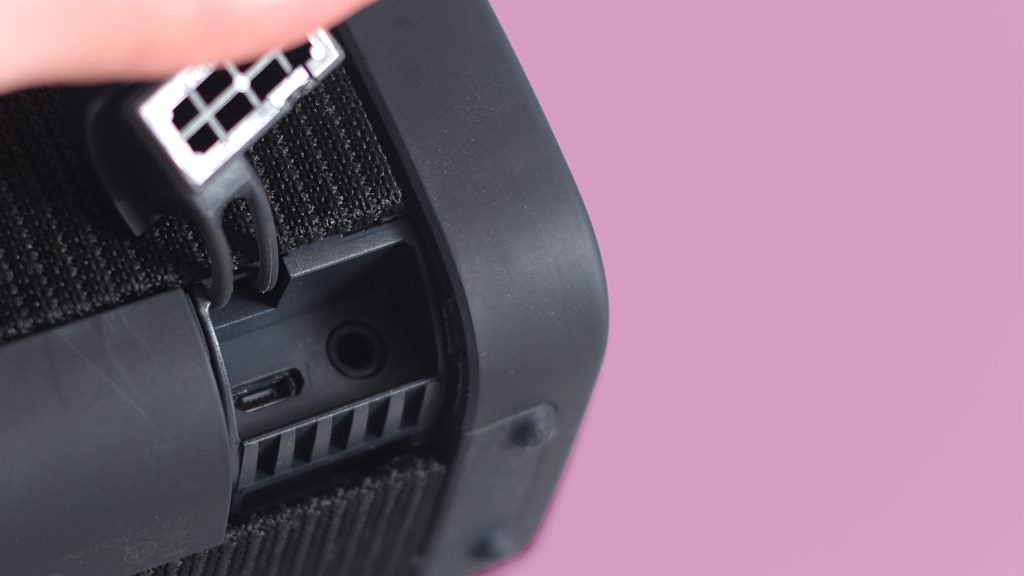 The Envaya has no ‘out there’ extra features that separate it from other Bluetooth speakers of the past couple of years. There’s a loop on the underside to let you attach a cord; it uses Bluetooth 4.1; and battery life of 13 hours matches the similarly sized Riva S.

You can link two Envayas up as a stereo pair. And while you’ll likely control the speaker from your phone most of the time, there are buttons on the side. These control power and volume, and let you take calls. There’s a microphone here, presumably hidden behind the grille since there’s no visible pinhole mic.

The button panel is one of the few parts of the Envaya that could clearly be improved. Its buttons are very stiff, and they offer almost zero feedback. Changing volume should be less of a chore. 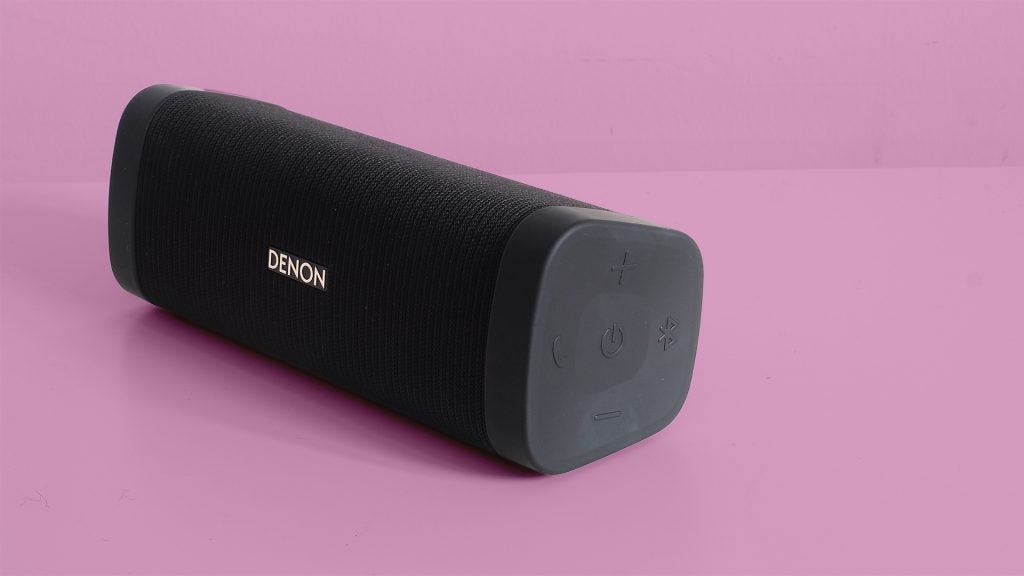 However, the power button is much easier to handle. A quick press will reveal a series of LEDs to the right of the grille. There are five, showing you the rough battery level.

A nod to the current interest in digital assistants, the Envaya also lets you communicate with Siri or the Google Assistant (depending on your phone). However, since this requires a long press of the “phone” button on the side, this definitely isn’t a smart home speaker. 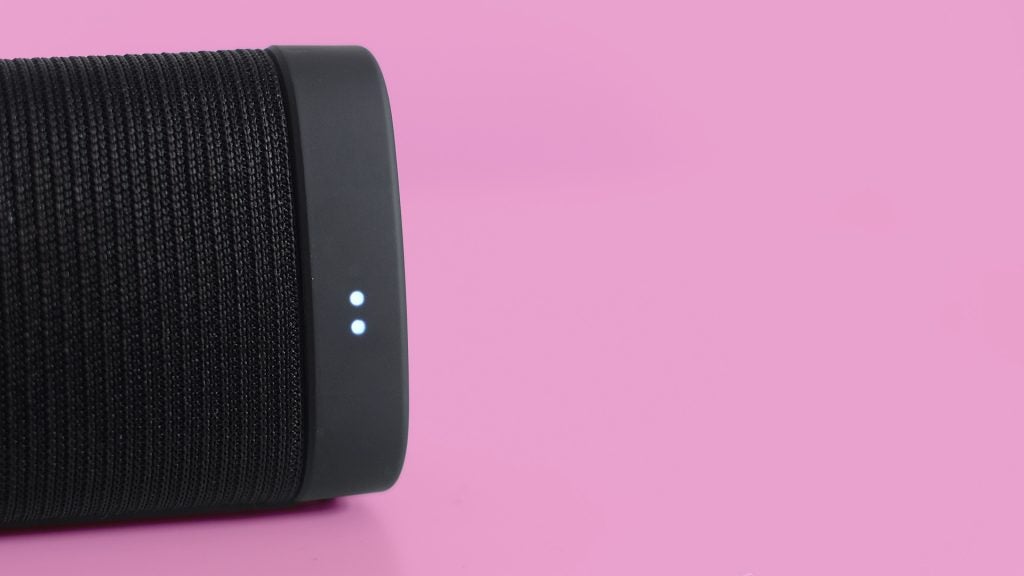 There’s no NFC chip in the Denon Envaya, used for quick pairing with Android phones. However, Bluetooth reliability is decent and you can get at least one room away from the speaker without signal break-up.

Shiny bauble features aren’t the Denon Envaya’s goal – but sound quality is. And in this regard, the Envaya is one of the best all-round small portable speakers to date.

Bass is far better controlled, and more measured, than that of the Bose SoundLink Mini II. The mids are weightier and display more texture than the Jam Heavy Metal. And the Envaya can handle higher volumes than the Riva S, showing excellent composure at this level too.

The speaker uses two 52mm drivers and a bass radiator in-between. That’s roughly the same size of active driver as the Bowers & Wilkins T7, which is a much larger speaker. 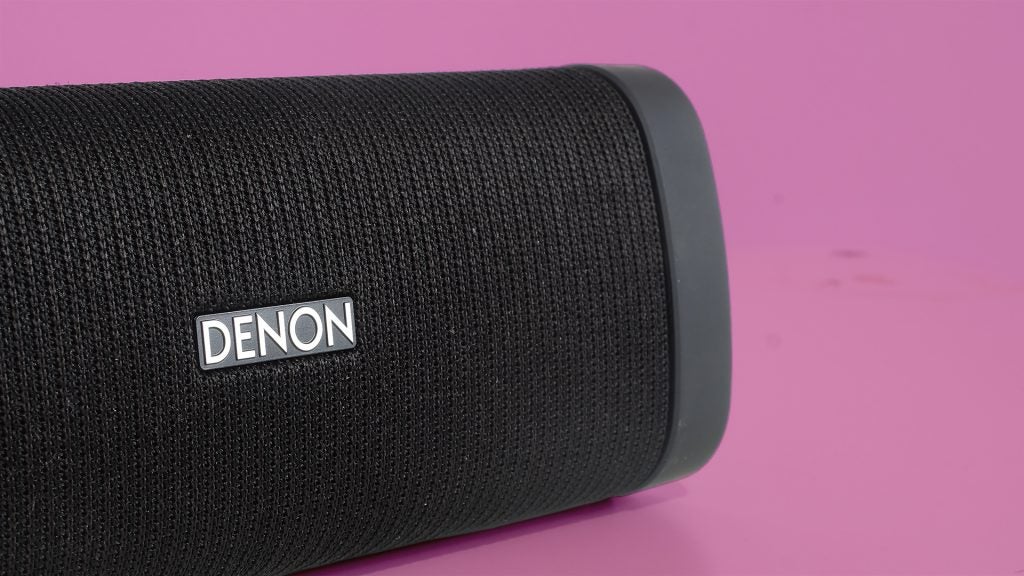 This is the reason the Envaya is a little bigger than average. And also, in concert with a large passive radiator, the reason it’s able to produce deeper bass than most. And we’re not talking here about a level of bass that’s out to constantly remind you of its presence, which is the Bose tactic. It’s more tasteful, and does not swamp the sound.

Low-end weight and the ease of bass delivery is excellent for a speaker of this size.

Denon has coaxed some real mid-range definition out of the Envaya too, which isn’t easy when you’re dealing with this sort of small driver array. The projection and detail of vocals is among the best in this class.

However, this is one area that the Riva S handles better. Its three 40mm active drivers offer greater mid-range sophistication, which digs that much deeper into the sonic information of vocals.

If you want a fun listen then the Denon Envaya still wins. While there’s a natural limit to the volume of a speaker this size, it can happily fill mid-size rooms and doesn’t become ‘shouty’ at higher levels.

It sounds great at low volume, too. Some speakers start to sound flat when played quietly; the sound flattens out. The Denon Envaya sounds interesting and dynamic at all volumes, making it just as good at helping you through the slog of an online grocery order as a small house party. 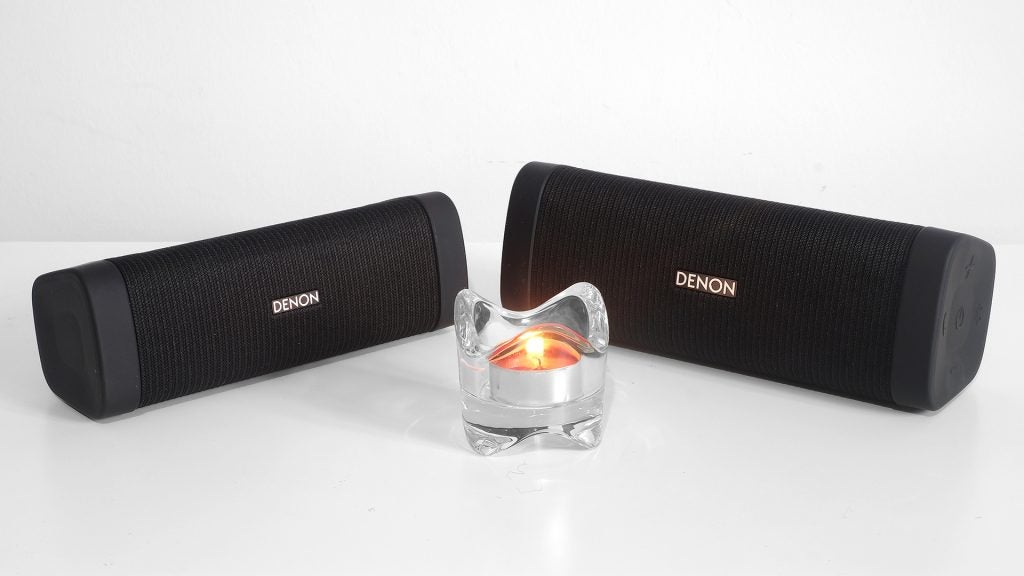 The smaller Denon Envaya Mini has a similar tone to the biggest Envaya. It’s balanced, has clear mids and fairly detailed treble.

However, you predictably miss out on the bass depth of the larger speaker. Slightly brighter treble and the upper-mids take the spotlight. The Mini comes across more detail-focused than its sibling, with a softer presentation that works well for relaxed listening while you’re having a bath or working in a home office. Clarity is actually better.

It doesn’t have anything like the bass punch or expansiveness of the larger Envaya, or other rivals such as the Jam Heavy Metal and Bose SoundLink Mini II, though. Electronic music sounds a little too polite through it, losing the excitement of bass drops and low-frequency beats.

The Envaya Mini isn’t a party animal, but with more delicate music it can actually sound cleaner than its big brother at the right volume. 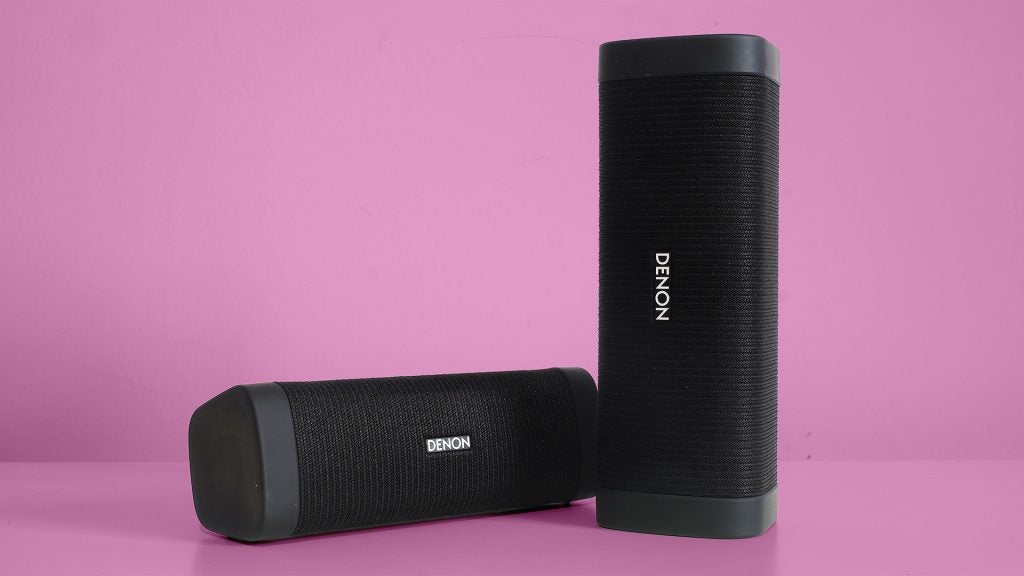 Why buy the Denon Envaya?

The Denon Envaya is one of the best all-round portable Bluetooth speakers you can buy. It sounds good played quiet or loud, and displays a fine balance between power and control – a struggle for makers of this kind of speaker.

Riva Audio’s Riva S still has the edge for mid-range fidelity, but it isn’t so much of a room-filler, delivers less impressive bass, and doesn’t sound as good at high volumes.

Some of you might consider a ‘smart home speaker’ instead. But think carefully before trading away convenience of a take-anywhere speaker such as this. How often do you really want to talk to Alexa?

If you find the price a little too high, check out the Jam Heavy Metal. It arguably beats the Envaya for pure value at just £59.99 (at the time of this review).

One of the best all-rounder portables re-injects life into Bluetooth speakers.