Pure is a name that has been so strongly linked to DAB radio for so long that it’s virtually impossible to research DAB radio sets without coming across the manufacturer. It has made radios for your kitchen, DAB-enabled systems for the lounge and portable units. The Pure 2500 is the latest in its pocket range. Is it worth buying?

Although home DAB units have decimated the humble FM radio (although many still feature an FM tuner), the same can’t be said of pocket units. For a range of reasons, including power consumption and quality of experience, they’ve largely failed to catch on as standalone gadgets. Pure has kept the faith though, producing the sector’s stand-out units. 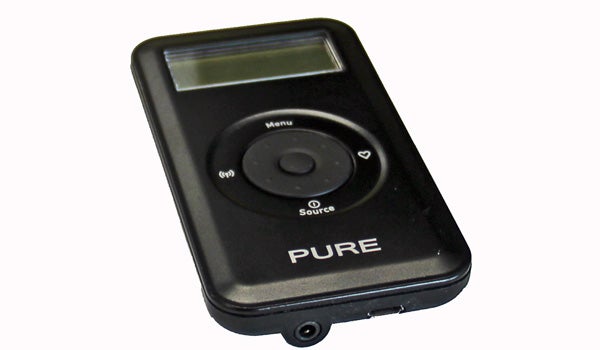 Pure’s handheld DAB range didn’t start with the current Move range. The Move 2500 ancestors are instead the PocketDAB products, the 1500 and 1000, which have been around for more than half a decade, and the more recent PocketDAB 2000.

The Move 2500 attempts to update the boxy looks of its predecessor by – wait for it – imitating the iPod Classic. That paragon of cutting-edge design. The front is matt black, the back chrome, and there’s a circular scroll wheel in the middle to act as the main controller. At 15mm thick, it doesn’t feel particularly slim compared to today’s smartphones. And as it’s a surprisingly large, near-iPod-sized unit that’ll spend a fair old while living in your pocket, that’ss a valid comparison.

It’s a step up from the previous PocketDAB 2000 in aesthetic terms, but fails to capture the sleek and stylish vibe of the top media players from Sony, Apple and even Cowon. If we forget our obsession with all things new and shiny for a few seconds though, in actual use it’s a highly successful design. The generously-curved back feels great in-hand and the circular scroll wheel fits under your thumb perfectly. Bliss.

It’s a proper physical wheel too, not the immovable touch-sensitive interface you find in an iPod Classic, but it fits with Pure’s wilfully behind-the-times style. The wheel doubles as a four-way navigational D-pad, taking you to the menu, tuning options, favourites and source selector. The button in the centre is, naturally, our select key.

The Pure Move 2500 is charged using a microUSB socket – good news for any owners of new-ish non-Apple smartphones – while the only other port on the device is the 3.5mm headphone jack. Its chrome back plate can easily be removed, revealing the 1000mAh battery. This provides up to 14 hours of playback. But what are those 14 hours like?

The Pure Move 2500 features a very low-resolution monochrome display, with an orange backlight – just like the PocketDAB 1500. It’s also very similar to the display used in the majority of Pure’s tabletop radios.

Now that we’ve been thoroughly spoiled by smartphone screen and full-colour media players like the DAB-enabled iRiver S100, this seems positively archaic. Whether it’s down to confidence or ignorance, Pure hasn’t seen fit to update this significantly since 2005’s PocketDAB 1000. 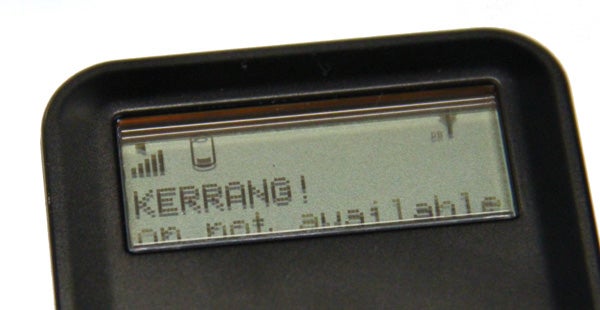 The display is typical Pure – clear, but very old-school

It’s also very limited in what it can do – another element that seems out-of-date in this time of convergence. There’s an FM tuner as well as DAB, but that’s about it. There’s no MP3 playback and no Wi-Fi internet radio. The 10 favourites for each of the tuner bands also seems stingy. Again, this was the limit imposed on the PocketDAB 1000. Six years ago. That said, we’d imagine the majority of buyers would be entirely happy with this number of presets – as we are. For those of you who scan the radio waves rather than cycling between BBC 6 Music and Radio 4, this may be more of an issue.

The chrome finish is snazzy, but boy does it scratch easily

Ultimately, there’s not a great deal to do in these menus though. You switch between DAB/FM, select a radio station, and can alter the bass and treble settings. We’d imagine many of you would end up just switching between a half-handful of radio stations for the most part. The screen’s low-tech, but not much more is required here.

Not being able to do more with the Pure Move 2500 is likely to put off many buyers though. Six years ago when the first PocketDAB came out, plenty of people (older folks mostly, in our experience) were resisting the urge to dump CDs in favour of digital media. Nowadays, we’re not sure that crowd’s too big. Everyone uses digital media these days, right?

That said, it does still make sense for people that use their phone as a media player, but aren’t satisfied with its FM radio (or lack thereof). DAB has only been built into a couple of phones over the years. And none of them were much cop. But is the DAB experience offered by the Pure Move 2500 worth £90?

The Pure 2500’s own sound quality is great. The bass and treble equalisation is basic but effective, clarity is good and there’s no errant noise to annoy in the background. However, it’s tricky to tell the full extent of quite how high-quality the radio’s sound circuitry is because the output is limited the DAB signal itself.

DAB radio is broadcast using MPEG2 encoding, which by today’s standards is woefully inefficient. As much as DAB radio’s marketing over the years has suggested that it’s better and clearer than FM, this is often simply not true. Especially these days, now that the DAB “pipe” is being spread further across more stations. This has resulted in ever-decreasing bitrates in radio station broadcasts (although it seems to have remained more-or-less stable in the last couple of years).

The Pure 2500 does support DAB , which uses the much better eAAC codec, but this isn’t currently isn’t broadcast in the UK. There are no plans for it to roll out any time soon either. Higher quality can be found in Freeview stations and, of more significance here, internet radio.

In real-life use, the limited quality offered by DAB leaves music sounding rather like a fairly low bit-rate MP3, with the loss of dynamics associated with this. Of course, radio stations don’t tend to output tracks in their plainest form anyway (using compression and the like) which mitigates for this somewhat. As does the array of fantastic stations you won’t find on an FM dial, like BBC 6 Music and BBC 5 Live. Speech-based recordings are affected much less significantly. Radio 4 sounds great on the Pure Move 2500. 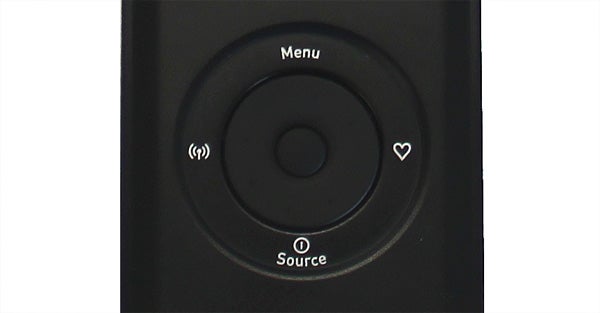 Why are we mentioning this problem when we probably wouldn’t in a home radio? We find the experience of listening with headphones makes the quality conundrum all the more apparent.

The key benefit of DAB, that allows marketers to claim increased clarity, is that with a reasonably strength of signal, you’ll receive the signal as-intended. DAB is either free from interference or pretty much destroyed – there’s no room for the slight fuzz you’ll hear in FM radio.

With a good signal, this makes DAB radio a joy to listen to, and why we can forgive it for its pretty poor audio quality. Unfortunately, getting a good signal with the Pure Move 2500 is far from guaranteed. Like its forbears, it uses the headphone cable as the antenna, rather than the telescopic aerial you’ll find on home radios or the Roberts Sports DAB II. 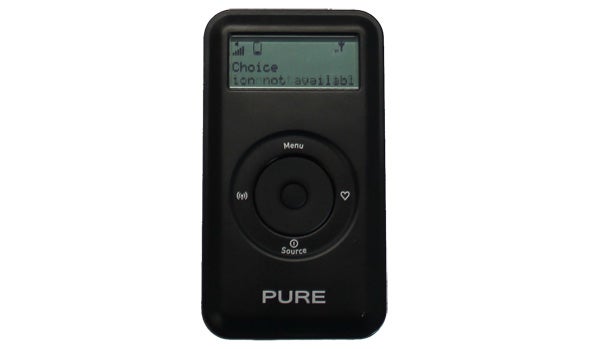 Out in the open air, this is enough to provide the Move with a strong signal. You can roam the streets with mostly distortion-free radio all day long. Step inside a building or, even worse, onto a train or bus, though, and the signal breaks down almost completely. After more than five years of development, the headphone aerial doesn’t offer anything like the quality of experience you’d get from a kitchentop Pure radio with a telecopic aerial at its disposal.

We still find DAB on-the-go impractical. Curiously, we also found FM radio reception to be unimpressive when compared directly with a budget smartphone’s FM signal under the same conditions. Maximum volume isn’t particularly high either. Seemingly a victim of overzealous AVLS (automatic volume limiting system), we found we had to max-out the volume with any headphones that were remotely hard to drive.

Whether the lack of progress on reception is Pure’s fault or a sad immovable feature of portable DAB, the lack of innovation elsewhere is hard to forgive. It looks better, and has a snazzier control interface than the PocketDAB 1500, but doesn’t solve its key issues. If you must have DAB, this is the best portable option out there. But that’s down to a lack of high-flying competition rather than a triumph on Pure’s part.

The Pure Move 2500 takes over from the PocketDAB 1500 as the DAB king’s key pocket offering. It improves on this predecessor with a neat scroll wheel and a more attractive design. The key issues remain though. Signal is still wholly unreliable on-the-move, and without any non-radio features to boast about, it looks decidedly behind-the-times and expensive. That said, for dedicated pocket-sized DAB you can’t do much better.