Portable DAB radios have failed to capture the public’s interest in the same way as MP3 players. Maybe radio is just not cool these days. Not swayed by the prospect of jumping into a rather niche puddle, iRiver made the S100 – a media player equipped with a DAB radio, FM radio and of course the ability to play MP3s and other music files. Will it convert the masses, or is this just another hopeless door-to-door Jahovah’s witness? 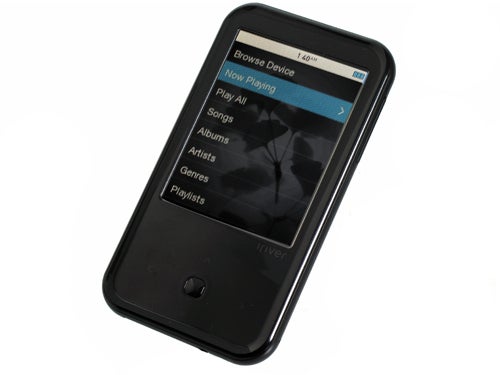 The iRiver S100’s build, like the idea of a portable DAB radio itself, doesn’t sound cutting-edge. It’s made of plastic and doesn’t have a touchscreen. Don’t turn your nose up just yet, because it’s lovely-looking and very well-made. At 9.8mm thick, the S100 is slender and the single-surface 4-button D-pad affords this media player a minimalist look. Although there are five buttons on its surface, you only really see one of them – the main select button.

The power button sits on the left side of the body, the pinhole mic and volume controls on the left. On the S100’s bottom are the 3.5mm headphone jack and the pull-out plastic panel that hides the microSD slot, miniUSB socket and the system reset button. Unlike most pocket DAB radios, the iRiver S100 includes a decent wedge of on-board memory, either 4GB or 8GB, offering enough room for around 40 or 80 albums.

Its plastic body doesn’t feel quite as luxurious as the metal-backed iPod Touch, but allows for a featherweight 77g girth – significantly lighter than the iPod Touch 4G’s 101g.

The screen’s a 2.8in model, using a 240×320 resolution. The pixel density isn’t high enough to make text look pin-sharp, but in a device that’s so audio-focused this isn’t a big problem. Text is clear, just not as beautiful as you’d see on the super-high-pixel-density iPod Touch 4G screen.

Support for different types of audio files is good, with the lossless FLAC and APE invited to the ball alongside the standards of MP3 and WMA. ASF, WAV and OGG are also supported. Video’s not quite so hot, with codecs limited to AVI, MP4, MPG and FLV. It also seems to be picky about the resolutions it’ll play back too. We can’t imagine many will want to watch a feature-length movie on a 2.8in screen anyway, but we wouldn’t recommend buying the iRiver S100 for watching video.

The iRiver S100’s simple interface is built around a scrolling list of nine options, including the main Music, Video, DAB and FM radio choices alongside fringe benefits like the text reader and Extras (Flash games, basically). Each of these options makes a different background image pop-up, and you can select the images you want manually – if this all sounds like too much flashiness you can set them all to the same image. 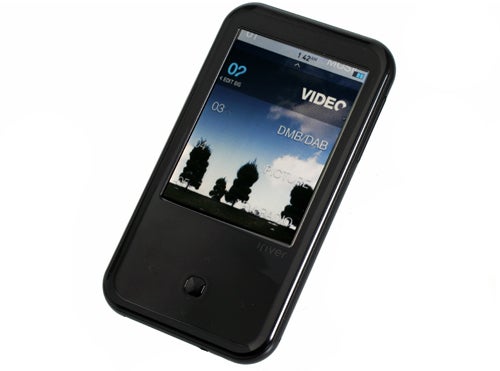 This is where the visual pizzazz ends though, as the rest of the interface is more conservative or – in some spots – downright bad. Navigation of music is perfectly fine though, thankfully. You can browse by Artist, Album title, Genre, Playlist or Rating and scrolling through your library is mercifully quick.

The radio side of the device feels under-designed and, well, rubbish by comparison -even though it purports to be the S100’s main function. The FM radio interface is one of the most rudimentary we’ve seen, out-simplifying even the most basic of phones. This wouldn’t be bad if it was quick to scan for the right station, but it isn’t particularly. Presets are also poorly implemented. 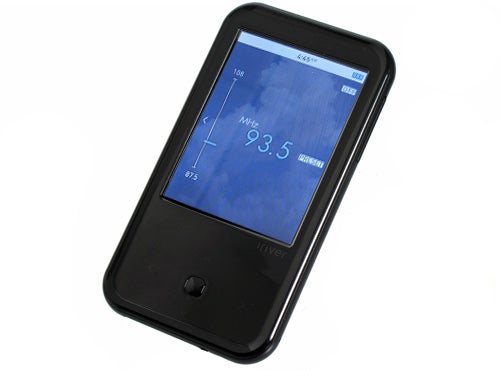 The DAB half of the S100 fares even worse. It looks nothing like the rest of the interface, cast in a sore-thumb light blue colour – and it bafflingly reverts to landscape mode for no particular reason (other than for DMB video-watching, which isn’t even available in the UK). You can’t change this either. The slick scrolling animation used in the music library and main menu nav is gone – the execution of the player’s main feature feels like an afterthought and that’s very disappointing. 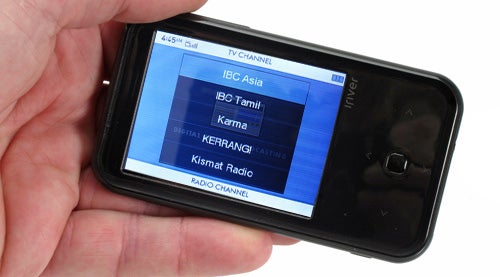 Some respect is won back by the ease of use of the radio recording feature, requiring just a tap on the select button while in either the FM or DAB radios, but it’s poor mitigation. There’s no recording timer or EPG available, limiting the usefulness of this recording feature from the start.

The S100 offers an initially nice-looking front-end that can’t cover up some dated elements at its core. You even have to manually re-scan your music library whenever you add new tracks – which will seem rather retro (and not in a charming way) to anyone who has ever used an iPod.

The iRiver S100 is a DAB -compliant device, but here in the UK the new standard isn’t broadcast. The difference? It’s primarily to do with encoding. DAB uses the MPEG2 codec, while DAB uses the more advanced eAAC codec. In short, this means that when transmitted at the same bit-rate, DAB broadcasts will sound much better than plain old DAB ones.

The quality of current DAB broadcasts varies greatly between stations, generally between 64kbps and 160kbps – but some delve even lower. This dilution of the broadcast stream has somewhat ruined the idea that DAB radio offers crystal clear “digital” quality – especially when the same stations tend to be broadcast at higher quality over Freeview. 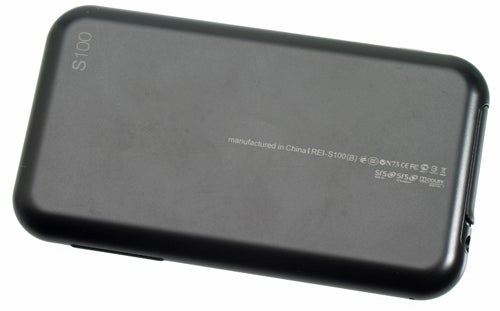 There are plenty of reasons not to be down on DAB though – primarily the many great stations not available on FM, such as BBC 6Music and Planet Rock. Thankfully, there’s generally a correlation between the quality of station and the quality of broadcast too.

As previous DAB users will already know, when the signal of a DAB radio breaks-up, it causes garbled digital noise rather than the fuzzy distortion of FM radio. It’s more distracting, making listening to DAB radio with an unreliable signal a frustrating, ear ache-inducing experience. Unfortunately this problem afflicts the iRiver S100.

Using the headphone lead as an aerial, the S100’s signal is not strong enough to ensure a consistent, non-garbled sound. Outside, we found it performed reasonably well, with just the odd blip, but indoors or on public transport performance was much worse – barely usable a lot of the time.

This isn’t really the S100’s fault, as the only sure-fire way to improve signal would be to add a whacking great big aerial. Hardly a practical solution for a portable, pocket device, but it points to one of the key reasons DAB radios haven’t taken off in spite of the popularity of home units. They’re much less resistant to the rigors of real-life use than an equivalent FM set.

You may have a better experience if the DAB signal is particularly strong in your area, but we tested the iRiver S100 in several different locations and found issues were never far away. As DAB radio also uses significantly more power than MP3 playback or FM radio, you’ll only get around 6 hours of it off a charge too. As much as we’d like to recommend DAB radios, most of them just don’t cut it experience-wise by today’s standards. 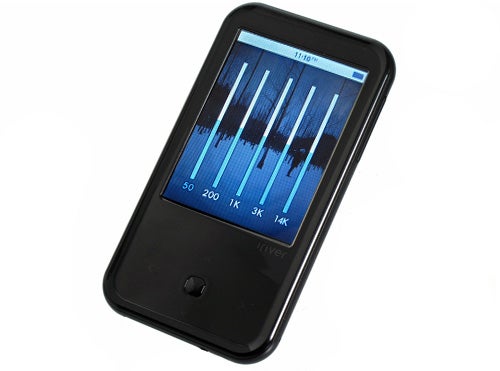 Sound quality is, as usual for an iRiver player, good though and there are a handful of customisation options. There’s the SRS WOW HD suite (comprised of SRS, TruBass, FOCUS, WOW and Definition), a similar SRS CS Headphone set of options, designed to improve low-quality encodes, and a standard 5-band EQ. Only one of these can be used at a time.

The SRS options range from the useful, like TruBass and FOCUS, which add low- and high-end presence, to those that can make your music sound plain ugly, like WOW. They’re not a patch on the options available from Cowon’s JetEffect 3.0 engine devices, but more that Apple’s players offer. Unfortunately, the standard EQ is weak and inflexible – not a great deal of use. 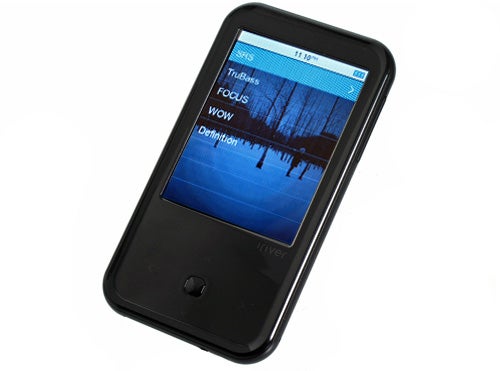 The iRiver S100 makes a good MP3 player but only an average DAB radio thanks to its poor interface and performance that doesn’t rise above the norm. At £129.99 for the 8GB version, it’s only slightly cheaper than a previous-gen [https://www.trustedreviews.com/mp3/review/2008/10/20/Apple-iPod-touch-32GB–2nd-Gen-/p1 iPod Touch], and much more than the [linkout:https://www.trustedreviews.com/mp3/review/2009/10/05/Sony-Walkman-NWZ-E443-4GB/p1 Sony NWZ-E443]. These aren’t DAB-enabled players, but the quality of DAB experience that’s available to the average city traveller just doesn’t merit a £100 outlay. Lesser pocket DAB radios are available for under £50, and that price tag feels much more in-line with what you’ll get from DAB on-the-go.

The iRiver S100 is a slim, stylish and well-made media player that’s technically future-proofed thanks to its inclusion of DAB support. However, a very patchy interface and real-world DAB performance that’s miles away from what you’d get with a home set costing half the price it’s not the cutting-edge radio solution we’ve been hoping for. Not enough has improved since 2005 and the [linkout:https://www.trustedreviews.com/multimedia/review/2005/10/25/Pure-Pocket-DAB-2000/p1 Pure Pocket DAB 2000].