Those of us that have been around for a few years will know that Pure Digital is was only a few short years ago a PC company primarily known for sounds cards, speakers and left-of-field graphics solutions, such as Power VR. All of this actually held it in good stead when it made a move into Home Cinema and then exclusively into digital radio. It’s now up there with Roberts as far as sales goes, which isn’t bad considering that compared to Pure, Roberts has been doing radio for an awfully long time .


DAB itself however is something a troubled technology, a subject that I touched upon just yesterday, and suffers from low bit-rates, and limited reception. This latter aspect in particular is an issue for the Pocket DAB 2000. If you’re fortunate to be in an area of very solid reception you’ll be able to enjoy DAB’s benefits such as covenient tuning via station name and helpful text information broadcast alongside. However, if you don’t have good reception, listening on DAB can be something of a frustrating and painful experience on the ears, with dropouts and digital noise even more annoying than the hiss and fade of analogue. Essentially then, when it’s good, DAB is good, but when it’s bad, it’s awful. But when you’re on the move, you can’t predict how good the DAB reception is. It could be good one minute and terrible the next. When walking along with the Pocket DAB attatched via the supplied belft clip I found that it was fine if exposed but if my coast covered it, there were frequant drop outs. This meant holding it in my hand – hardly convenient. Sure, Pure has included an FM tuner into the Pocket DAB, but when you’re having to constantly switch it kind of defeats the purpose of having a digital tuner in the first place. 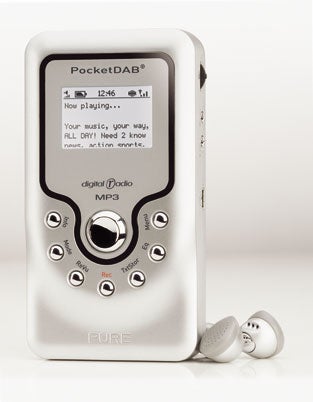 This however, is not the fault of Pure Digital. But what of the Pocket DAB 2000 itself? As the name suggests, this is a follow up to the Pocket DAB 1000 but adds two new features, MP3 playback support and ‘Revu’, which enables you to pause and rewind radio, a concept familiar to anyone who has a PVR such as Sky + or a Media Centre system.


In terms of design the two are closely related but the Pocket DAB 2000 enjoys a larger LCD screen. However, first impressions of the 2000 weren’t great. The curves on the facsia and the arrangement of the buttons gives it a retro fifties look but not in a good way. While Roberts has this down to a fine tee with its kitchen radios, the Pure looks like a reject from the Flash Gordon film set. Things aren’t improved by taking it out of the box. Size wise it looks as though it’s swallowed two iPods for breakfast, though it actually weighs the same as one at 160g. The thing is, even though the Pure can play back MP3s and record, I’m still not sure why it needs to be so big, not only compared to an iPod but also compared to the recently reviewed PD100 DAB radio.

Despite its size, I wasn’t blown away by the build quality. It all feels a bit plasticky, with the volume control on the unit itself being particularly unpleasant. The supplied earphones are also rather cheap though they do have an integrated volume control.


The unit is activated by holding down the power button on the right presenting a ‘Powered by Imagination Technology’ splash screen. That was about it though as indoors in the TrustedReviews office I could get no DAB reception whatsoever. I could get some FM reception though it was very poor.


Outside it fared better. The headphones act as the aerial and a quick auto tune later I had a list of stations. The mode button brings up a choice of FM, DAB and MP3 modes. You move between them using the central rocker switch and select by pressing it in though sometimes it had a mind of its own and switched without pressing. Odd. The problem was that while I had reception outside it wasn’t great, with signal strength varying widely between 20 and around 70 per cent with 85 per cent needed for good reception. In my home, things were an improvement with 80 per cent and above achievable, though in some rooms I did have to hold it up in one hand, bend over backwards and stand on one leg and hop. But that’s fine, I do that anyway sometimes.


At first I thought sounds quality was awful but that was because I was using the supplied headphones, which sound as bad as they look. With my cherished Koss Porto Pros however, the sound was really excellent, being as fat (phat?) and as fulsome as the unit itself and noticeably better than that of the MPIO PD100. One of the buttons on the front is an EQ button, which scrolls though the various settings and helps to shape the sound for the type of audio you’re listening to. 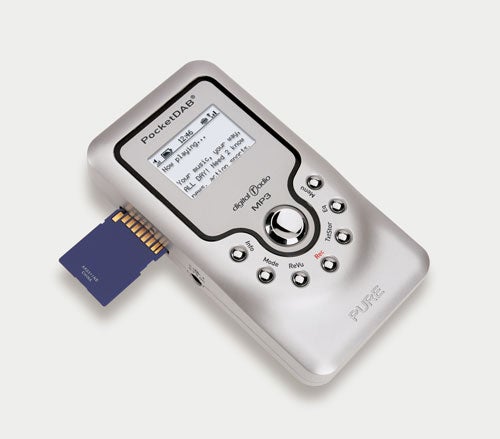 Moving between DAB stations, FM frequencies and MP3 tracks is done by pushing the central rocker up and down. The player was quite happy with both regular and VBR MP3s and didn’t have a problem navigating folders either. ID3 tag information scrolls across the screen while tracks are playing and if you go out of the MP3 mode it carries on from where you left off, when you go back in. Tracks can be transferred over to the player either by putting the card into a reader or by plugging player into your PC using the mini USB port on the right using the supplied cable.


On the left hand side of the player is a slot for an SD card, and Pure supplies a 64MB one in the box. You can use this to record DAB but not FM. This is done by pressing the ‘Rec’ button. The SD card isn’t required for the Revu function, which uses built-in memory instead and can capture between ten and twenty minutes depending on the data rate of the station. You can also capture the broadcast text messages by pressing the ‘Text Store’ button.

The Revu mode works well once activated, which is done by holding down the button. A counter at the top shows how far behind the live broadcast you are – though if it showed a minus symbol it would be even clearer. Alternatively, you press it just once to pause the broadcast. You hold left on the rocker to rewind, and right to forward up to the live broadcast. The problem is that it’s too easy to press the rocker, which cancels Revu mode.


The biggest flaw with the Revu mode however, is that it’s not on by default. It needs to be manually activated, which essentially removes its use as a spur-of-the-moment tool. If you’ve just missed something you won’t know to activate it until it’s too late. Having it on all the time might be a drain on the battery but if would be nice to have the option to have in on by default as there is with Sky +. 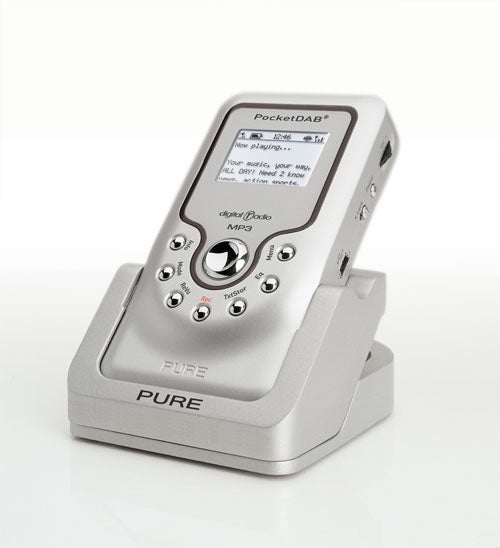 Finally there’s an optical out on the top, should you wish to output to an amp or an Minidisc player. The Pocket DAB 2000 is powered by three removable AA batteries and a set of rechargeable Ni-MH batteries and a wall charger are supplied. The battery life is rated at 10 hours for DAB and 20 for FM, which seemed about right.


There’s no doubting the ability and the potential sound quality of the Pocket DAB 2000. After using it for some time however, I was left with the feeling that while I was impressed with the abilities of Imagination Technologies as a chip designer, the product was firmly let down by the design and interface. When you bring home and unpack and iPod you’ll see the legend, ‘Designed by Apple in California’. With the Pocket DAB 2000 I wouldn’t have been surprised to see the words, ‘Designed by a Bloke Called Gerald in Sheffield’. Despite its wealth of features it’s just too large and cumbersome to enjoy. ‘Pocket’ DAB seems a bit optmistic. If you want DAB on the move, the MPIO PD100 has the advantage of size and can also record and play MP3. True, it doesn’t have Revu, but I see that as being most useful when you’re listening at home and the phone rings. And if your reception isn’t’ up to scratch, you’ll be hard pressed in some areas to record anything but digital noise.


Certainly a feature laden player, but getting the best out of it will very much depend on the on the quality of your DAB reception, which on the move, will be unpredictable at best.