What is the Wahoo Fitness Tickr X?

Heart rate monitors aren’t typically very exciting devices to review; they serve one distinct purpose. The Tickr X is a heart rate monitor with a difference, augmenting the basic heart rate measurements with a whole raft of extra features provided by an accelerometer.

There are lots of measurements that will apply to running, cycling and general fitness training, making it a versatile device offering wide appeal.

The Tickr X doesn’t look particularly exciting, much like all chest-worn heart rate monitors that have come before it. These devices are generally worn under a top of some kind anyway – unless you’re one of those show-off Adonis types from Wahoo Fitness’ marketing materials.

The sensor itself is made from plastic. It doesn’t feel the most hardy, but I didn’t encounter any problems with its build quality in the weeks of testing. In terms of putting it on the Tickr X simply clips into its stretchy band using button fasteners. Getting it on and ready takes seconds – and the Tickr X is also incredibly quick to start detecting. 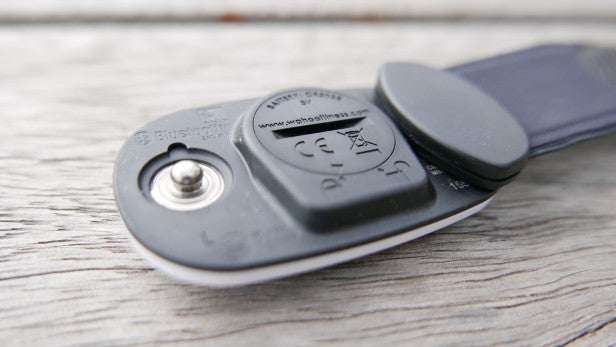 As soon as the sensors on the rear of the band make contact with skin, the LEDs on the sensor light up almost immediately to tell you it’s woken up. It’s far quicker in this regard than the MyZone MZ-3. There are two LEDs on the sensor: one to show it’s connected to your smartphone; the other to show it has begun detecting a heart rate. 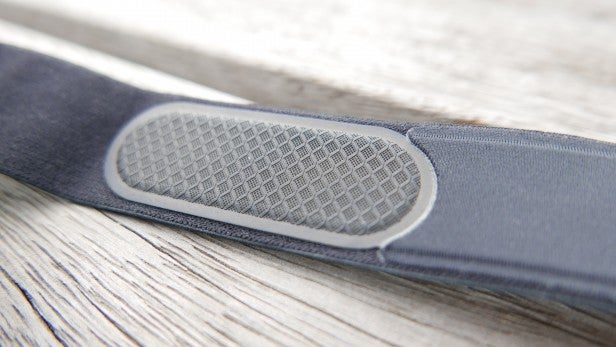 The sensor offers Bluetooth LE support for pairing with your smartphone, and it also supports ANT+ to use with other compatible fitness devices. It can do both at the same time, too. So you could have your heart rate data being displayed on an ANT+ running watch and also being sent to your smartphone over Bluetooth simultaneously.

The Tickr X works with a number of Wahoo Fitness apps including its Wahoo Fitness: Workout Tracker and 7-Minute Workout, and each serves a different function – I’ll come back to these later. Pairing was super-easy, with the Tickr X was up and running with my Android smartphone within seconds. There are iOS versions of the apps available, too.

There’s no need to charge the Tickr X, since it uses a standard watch battery, which should be good for 12 months.

The app doesn’t necessarily make it obvious what each of these data points mean, however, but a quick bit of research can provide the answers. They all essentially apply to efficiency and can help you improve your running. 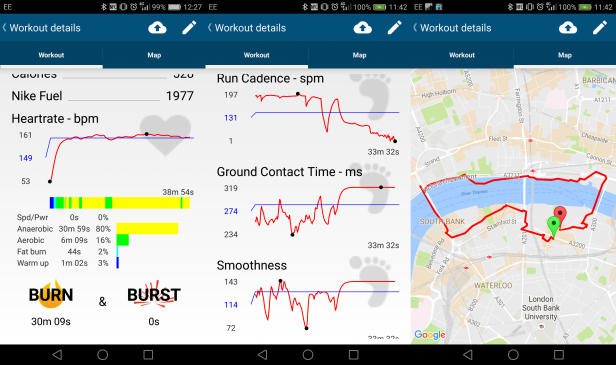 Ground contact time is the duration your foot stays planted to the floor before you push off. Vertical oscillation is how much you bounce up and down. Running smoothness applies sway to the previous measurements. Taking all of these measurements into account can mean improvements to your speed and endurance.

Shaving off mere milliseconds off your ground contact time with each stride, for instance, can make a huge difference come the end of a race and can also ensure you’re not running out of stamina too quickly.

Other more common measurements are also provided, such as running cadence, and you get an audio readout from the app during your run, alongside distance updates. How much information you want provided can be configured in the app.

You can also use the app with the Tickr X for treadmill running. Then there’s cycling, both outdoor and indoor, too. Both get cadence measurements, but you won’t get any speed or distance measurement when on an indoor or recumbent bike. If you’re a regular attendee of spin classes, you’ll find the cadence measurement alongside heart rate particularly useful.

As for heart rate, you of course get the standard measurement and graphs showing your beats per minute and zone during your run or cycling. You also get a Burn and Burst measurement, showing you how much time you’re in a “fat burning” zone (Burn) or speed and performance improving zone (Burst).

My only complaint with the Workout Tracker app is its general presentation of data, at least in the Android app. It could do with some work just to make it look a little prettier and easier to digest. It’s just a long scrolling list of graphs and measurements at the moment.

If you don’t want to start an activity through the app, you can also begin a phone-free workout simply by double-tapping the sensor. You won’t receive any of the metrics that are phone-dependent, such as GPS. There’s 16 hours worth of internal storage, so you can sync the data to the app at a much later date. 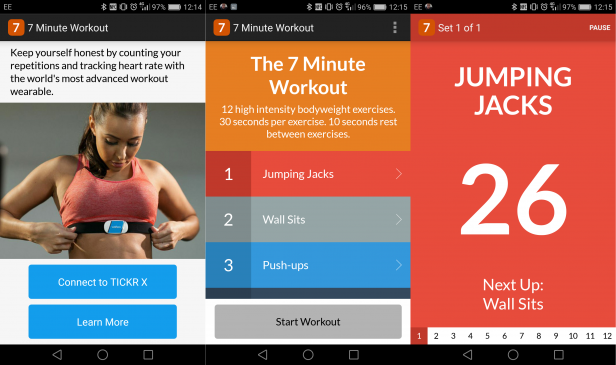 The 7-Minute Workout app is more of a body weight circuit-training app, incorporating burpees, squats, tricep dips and the like. It’s been a popular mainstay of the Google Play and App Store for a while, but doesn’t actually require the Tickr X to use. If you pair a Tickr X with the app then you get rep-counting based on the accelerometer inside, alongside heart rate measurements, which is more of an added bonus than a reason to consider the Tickr X in the first place.

The accelerometer proved accurate in picking up each rep completed. You’ll need to make sure you download the correct 7-Minute Workout app from Wahoo Fitness; there are a number of other apps using a similar name.

Related: Workout logs are the key to getting fitter  – here’s why

Should I buy the Wahoo Fitness Tickr X? 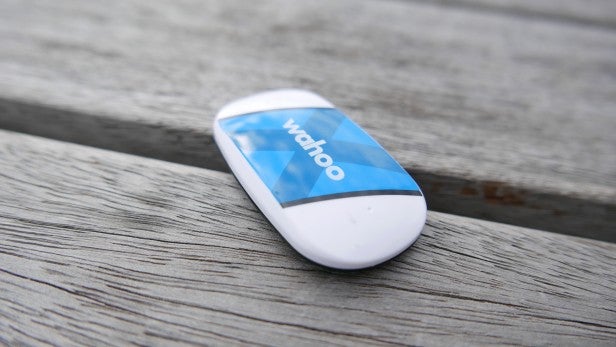 The Tickr X is one of the most feature-packed heart rate monitors out there. It’s super-easy to put on and comfortable to wear. While some of the insights are initially a little tricky to decipher, once you have an understanding of them, you can apply them to actually running more efficiently, as well as applying the heart rate measurements to training accordingly. The 7-Minute Workout integration is an added bonus.

There’s actually a Tickr Run model also available for around £49.99. This sacrifices some features of the Tickr X, including the rep-counting, indoor cycling cadence and built-in memory. It might be worth considering if you don’t mind losing those features.

Then there’s the MyZone MZ-3, which is a heart rate monitor with greater focus on making you want to push yourself than on providing analysis. For me, the Tickr X is still the best and most versatile heart rate monitor I’ve tested.

The Tickr X is an incredibly feature-packed HRM that goes beyond just heart rate monitoring and provides genuinely useful running insight as well.