The Realme 7 Pro is a terrific all-round device that will delight those looking for a budget phone with decent photography and the freedom of fast-charging. The 7 Pro’s toughest competition ultimately comes from in-house, likely leaving Realme with smiles on their faces either way.

While many budget phones focus on giving you more premium specs at a reasonable price, the Realme 7 Pro is a bit more shallow – and it’s all the better for it. However, tough competition from other manufacturers, as well as in its own backyard, gives it an uphill battle.

Realme has been giving it some welly in the budget market recently, with the Realme X50 5G offering a smorgasbord of features at a budget price while the regular Realme 7 provides impressive gaming performance at a low price.

The Realme 7 Pro sits between these two devices, including some features of each phone while dropping some others. It’s clear Realme’s aim is to cater for a range of users rather than simply provide basic gradual spec bumps as its prices rise. Has the Realme 7 Pro nailed its spec sheet for its desired user base?

Unlike its 120Hz Realme X50 5G and 90Hz Realme 7 brethren, the Realme 7 Pro sticks to 60Hz. The reduction may cause onlookers to initially turn up their noses at the supposed “Pro” model, however, there’s a key difference – AMOLED. 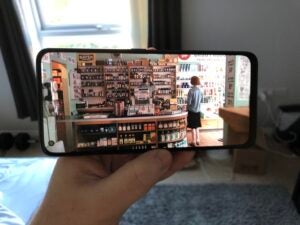 The Realme 7 Pro display, unlike the other aforementioned Realme phones, uses an AMOLED panel rather than LCD and the results are immediately obvious. You get deeper blacks and colour across the board is more vibrant than LCD alternatives, while viewing angles are improved too.

The lower refresh rate means scrolling isn’t as smooth and gamers may not love this panel but, for media viewing, the Realme 7 Pro is a winner – especially at its low price. 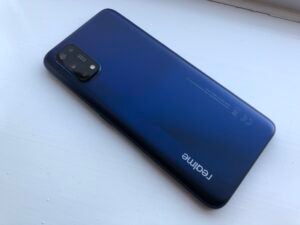 In the design department, the Realme 7 Pro is almost identical to the Realme 7 – and that’s no bad thing. Both phones give off the impression of phones around double or, even, triple the price. Unfortunately, the illusion is somewhat shattered by the plastic back but, in use, it’s pleasing to hold and looks perfectly stylish.

The bezels of the 7 Pro aren’t razer-thin but they are also far from egregious, while the Mirror Blue and Mirror Silver colours are inoffensive – if a tad bland.

The Snapdragon 720G chip in the Realme 7 Pro puts the sword to the phones that shell out for Snapdragon’s flagship processors and even the hugely popular mid-range Snapdragon 765G.

Admittedly, the Realme 7 Pro doesn’t feel blazingly fast but it also doesn’t feel all that much slower than some flagships that cost 2-3 times as much. The comparison to Snapdragon 765G is a poignant one, offering negligible performance difference. Both the Realme 7 Pro and 765G-sporting devices take that little split second longer to ready apps than flagships but most users, especially at this price point, really won’t care.

The Realme 7 Pro offers similar gaming performance to its more gaming-focused sibling, the Realme 7, while beating it in day-to-day usage. You can play all the latest popular mobile gaming titles on high settings with no troubles. However, you are saddled with 60Hz here, even if the crisp AMOLED goes some way to alleviating that disappointment.

The in-display fingerprint scanner is something that does show some slowness, being far less snappy than the power button-integrated solution on the Realme 7. The delay isn’t all that irritating but may bother the speed-conscious.

On the speaker front, you get one of the best experiences at this price. As always, you’ll be able to get a better experience from a set of headphones – thankfully, you get a headphone jack here to help with that – however, the earpiece speaker and bottom speaker combo is mightily impressive.

There’s a lack of bass and some distortion at higher levels but, in regular use or the odd headphone-less session, you won’t be disappointed.

While some cameras at this price are best forgotten about, the Realme 7 Pro is a step up and certainly there to be considered for photography fans on a budget.

First and foremost, the Realme 7 Pro is a great point-and-shoot device. Many budget phones try to solve sensors shortcomings in software and end up with unnatural results. Thankfully, Realme doesn’t have to. The 64-megapixel sensor does a stellar job in natural light, capturing detail, shadow and colour accurately across the whole image. 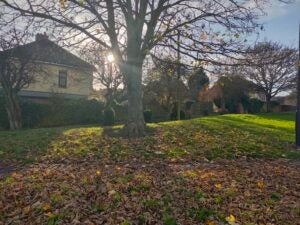 The zoom capabilities aren’t bad either, offering a delightful level of detail at 2x. However, you’ll probably want to avoid the phone’s max 5x zoom, as it’s pretty blurry in all scenarios.

Another folly for budget camera phones is superfluous additional sensors and, while the 7 Pro isn’t perfect in that regard, the ultra-wide lens certainly shouldn’t be ignored. It’s a handy camera for when you’re unable to adjust your position and/or just want that wider perspective. You do lose some sharpness and accuracy compared to the main sensor but it produces a perfectly acceptable image. 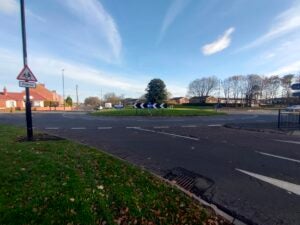 The portrait mode option is far less impressive for the capabilities of the main camera but it does a decent job, nonetheless. Portrait mode can be rough going at this price, with the focal point often over sharpened and the bokeh effect all over the shop. For the Realme, portrait mode does a solid job of enhancing the subject and accurately applying some bokeh around it. Unfortunately, the bokeh is a little weak and could be more intense to give the desired portrait effect. 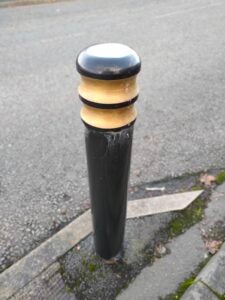 While it can’t offer the capabilities of flagship phones when it comes to night mode, the 7 Pro certainly gives it a good whack. The night mode isn’t overbearing on software tweaks. Instead, you get a image brightened slightly in most of the right areas with little compromise on detail.

Night mode is extended to video on the Realme too and it also does a good job of producing lighter results, even if it doesn’t (understandably) retain detail in the same way as the night mode photos. The general video abilities are not to be sniffed at either, with clips you won’t be ashamed to share online and a decent stability mode.

The battery life of the Realme 7 Pro is decent enough and the 4500mAh cell will get you through the day. However, the battery performance is just okay when compared to some rivals at a similar price – including the Realme 7 and Moto G8 Power. Even the lower capacity-sporting Realme X50 5G seems to get more life out of its battery than the Pro.

Nevertheless, those used to a day of battery won’t be let down here but heavy-users or those who want to go beyond a single day have several options elsewhere. 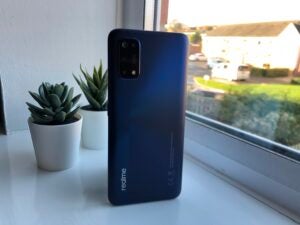 One thing that lessens the blow of the only okay battery life is the stunning 65W SuperDart charging. Realme touts you can get 100% battery from 0% in just 34 minutes – and it’s claims are completely true. The superfast charging means you’re never left in a panic and can easily whack your phone on charge for even just 5-10 minutes to get a decent boost.

Should you buy the Realme 7 Pro?

If you’ve taken an interest in Realme of late with its stellar new budget phones, the company is making it fairly easy to decide between its £200-£300 lineup. To put it simply, the Realme 7 is the gaming one, the Realme 7 Pro is the stylish, fast charging and photography one and the Realme X50 5G is the high performance, 5G and 120Hz one.

There’s a tad more too it but those are the key features that will play the biggest role in your decision alongside price.

Against competitors from other manufacturers, you are able to get things like battery life and a higher refresh rate display but none provide it in such a good-looking build that contends with devices twice the price.

The Realme 7 Pro is a terrific all-round device that will delight those looking for a budget phone with decent photography and the freedom of fast-charging. The 7 Pro’s toughest competition ultimately comes from in-house, likely leaving Realme with smiles on their faces either way.