Whether it warrants its Pro moniker or not, the Poco F2 Pro is a deeply compelling mid-range handset. There aren’t many phones that offer this level of performance at such a competitive price.

If I was to make one wish for a prospective Poco F3 Pro, it would be to step things up to 90Hz. While the Poco F2 Pro impresses in a number of areas, it does have some missing features when compared to the rest of the crowd at this price.

You do get an in-display fingerprint sensor though, and it’s reasonably fast and responsive as far as these things go. Which isn’t as far as traditional dedicated biometric sensors, but that’s hardly an issue that’s unique to Xiaomi.

Audio is another aspect of the Poco F2 Pro that’s only partially Pro. On the one hand, you get a 3.5mm jack and support for Hi-Res Audio. On the other, there’s only a single downwards-firing speaker, which proves easy to cover when playing landscape-oriented games. 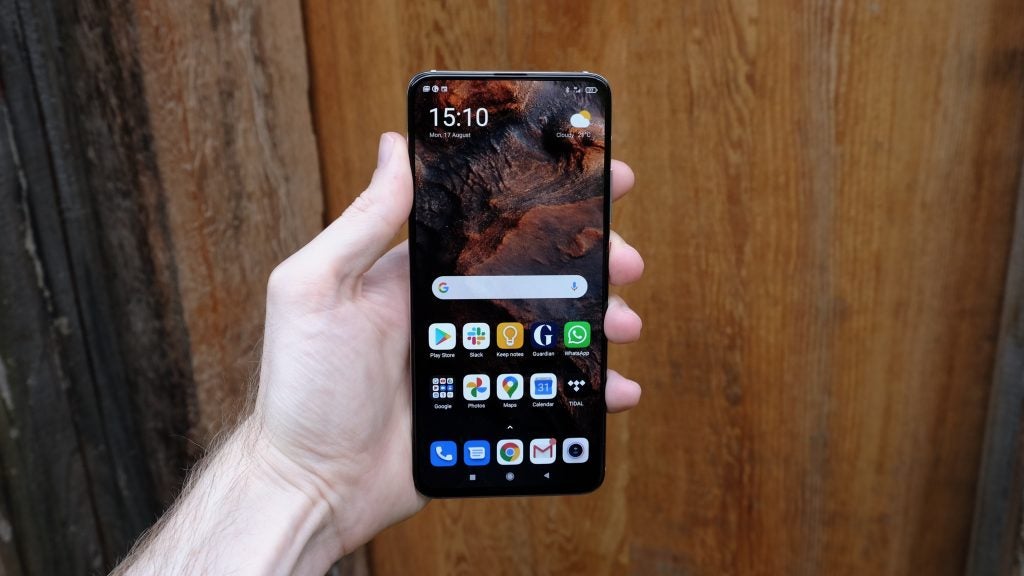 While the Poco F2 Pro’s lack of a 90Hz display might not make it seem as fast as one or two of its mid-range rivals, it proves its mettle under pressure. With a Snapdragon 865 powering things, it’s as capable as any other Android phone on the market right now, regardless of price.

You’re stuck with a 60Hz refresh rate, but it’s a rock-solid 60Hz. There’s no hint of stutter or delay, with apps booting up and switching with the no-nonsense speed only a flagship phone can muster.

The amount of RAM you get varies by model, and not just by capacity. Our unit came with the full 8GB of super-fast LPDDR5 RAM, but the entry-level model gives you 6GB of slightly slower LPDDR4X. 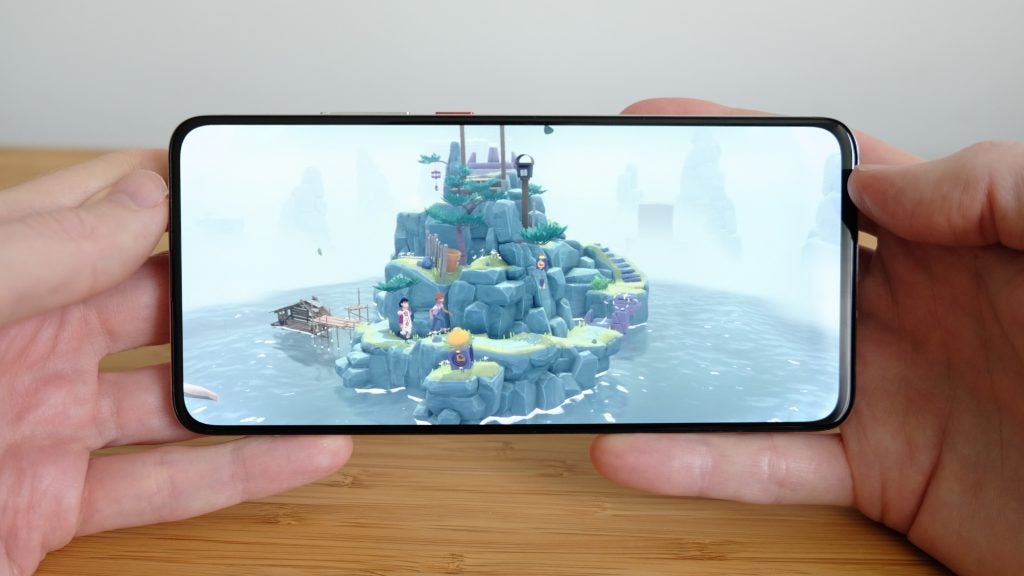 Games ran beautifully, from the fluid 2D action platforming of Dead Cells to the stunning 3D time-manipulation puzzles of The Gardens Between. There’s also a Game Turbo mode buried in the Settings menu, which lets you optimise the phone’s resources for gameplay.

There were some problems connecting a Bluetooth controller, though. I tried two different PS4 pads of markedly different vintages, and with both the experience was laggy and downright unplayable.

Still, an average Geekbench 5 score of 902 single-core and 3,312 multi-core confirms that this is a top-level performer. It’s certainly refreshing given the recent trend to go with the lesser Snapdragon 765G in many of the best mid-range phones like the OnePlus Nord, the Motorola Edge and the Oppo Find X2 Neo. 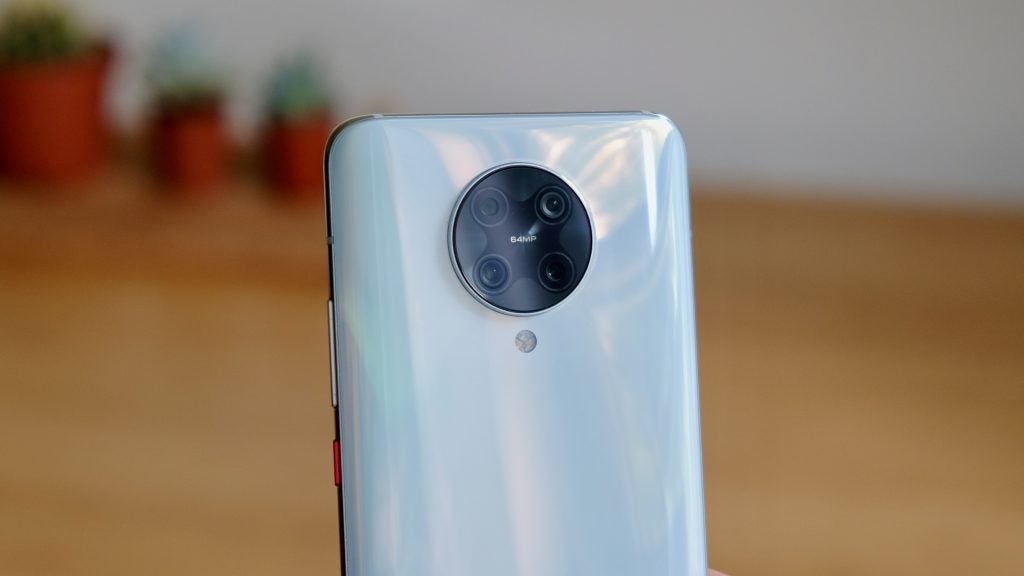 Camera – Not bad, but definitely not ‘Pro’

Another way in which the Poco F2 Pro ostensibly earns its Pro stripes is with its camera. It’s certainly a much more advanced set-up than the Pocophone F1, but it doesn’t get close to rivalling the very best camera phones on the market.

The main sensor is a 64-megapixel unit. You also get a 13-megapixel ultra-wide-angle sensor, a 5-megapixel macro sensor, and a 2-megapixel depth sensor. As always, those latter two don’t really matter all that much.

But the main sensor is interesting. It’s a Sony IMX686, which is the same sensor you’ll find in the Xiaomi Redmi K30 Pro, the Asus ROG Phone 3, and the Vivo X30 Pro. It’s significantly larger than the IMX586 before it, which is the component used in the OnePlus 8 and the OnePlus Nord, among many others. 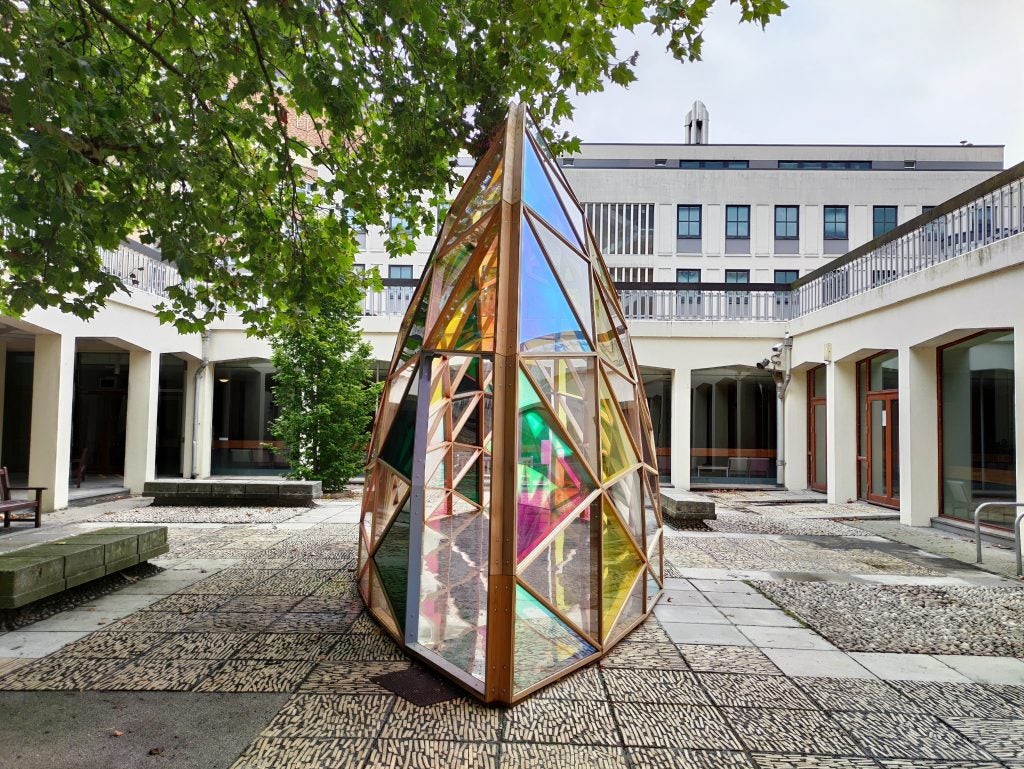 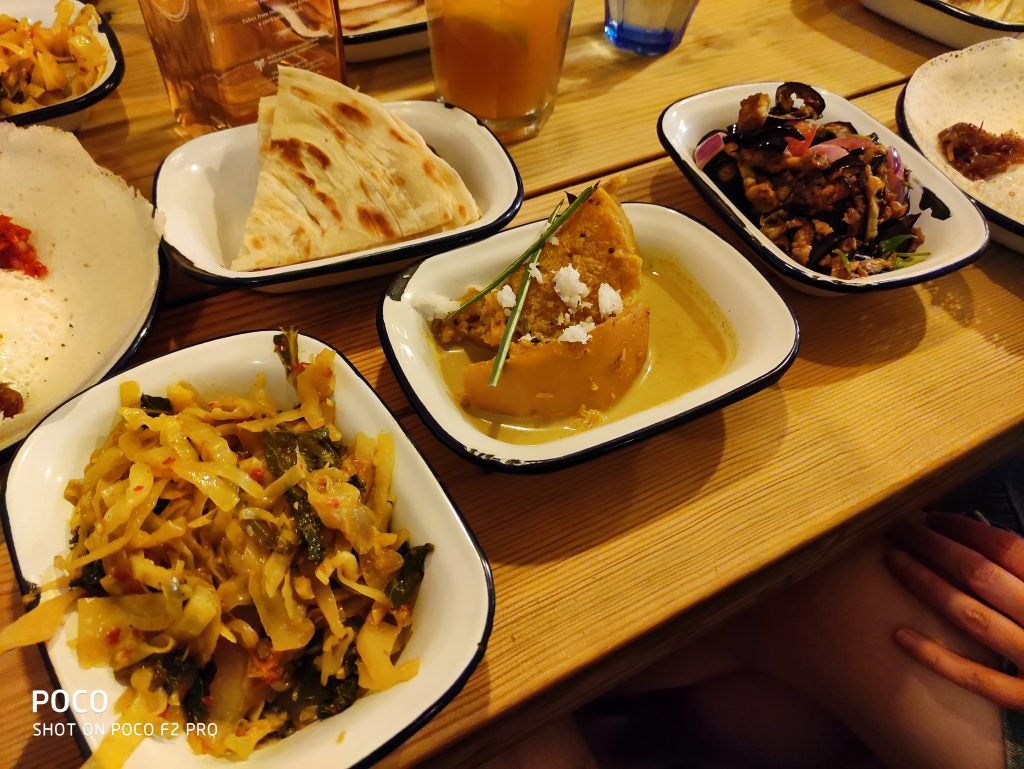 In good lighting, the Poco F2 Pro is capable of capturing genuinely excellent shots. There is a slight tendency to overexpose elements, but the colour balance is pretty on point.

The ultrawide sensor matches the tone quite well too, though there’s the usual excess noise at the edges that you always get with cheaper wide-angle sensors. The 2X zoom works quite well in the absence of dedicated optics, for which you can probably thank that high megapixel main sensor. 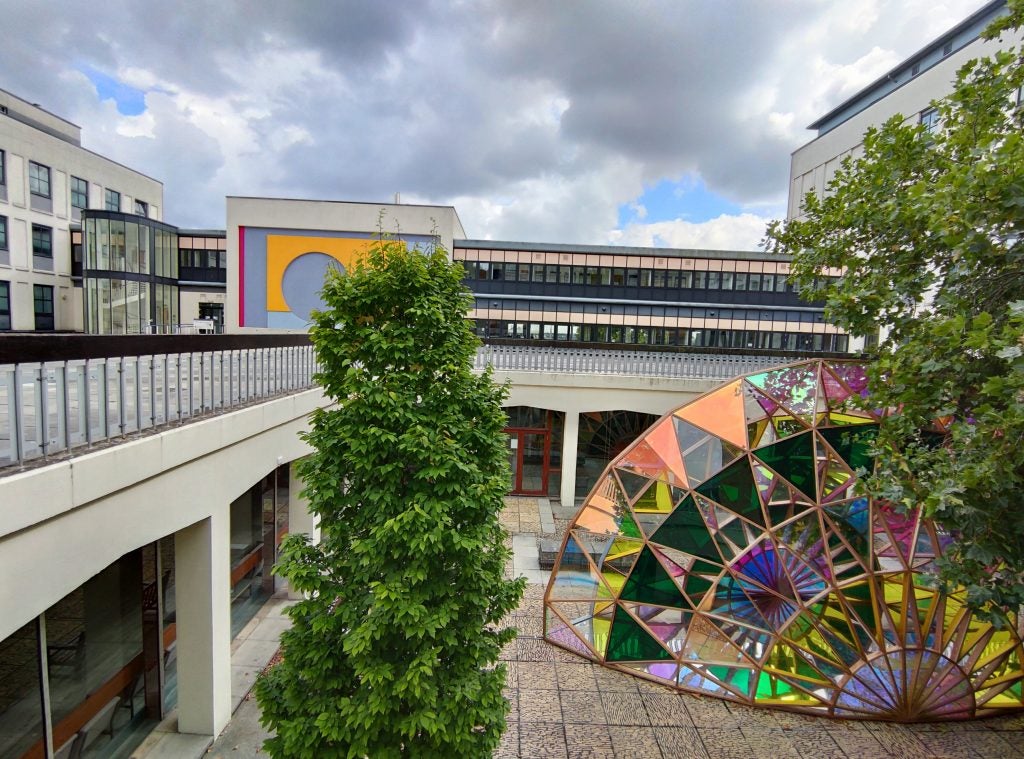 It’s far from a flawless shooting experience, however. Indoors shots and those in less than ideal (but not outright dark) lighting conditions were disappointingly noisy. Several early evening shots taken at an open-sided tent meal yielded blurry, unfocussed faces, while there are weird grainy artefacts on the white walls of a kitchen brunch scene. The lack of any OIS can’t have helped in these conditions – an omission that doesn’t strike as being particularly Pro.

There’s also the odd inexplicable irritant to be found here. Why are both the auto HDR and AI scene selector tools turned off by default? And why does Xiaomi persist with its horrible image watermark? 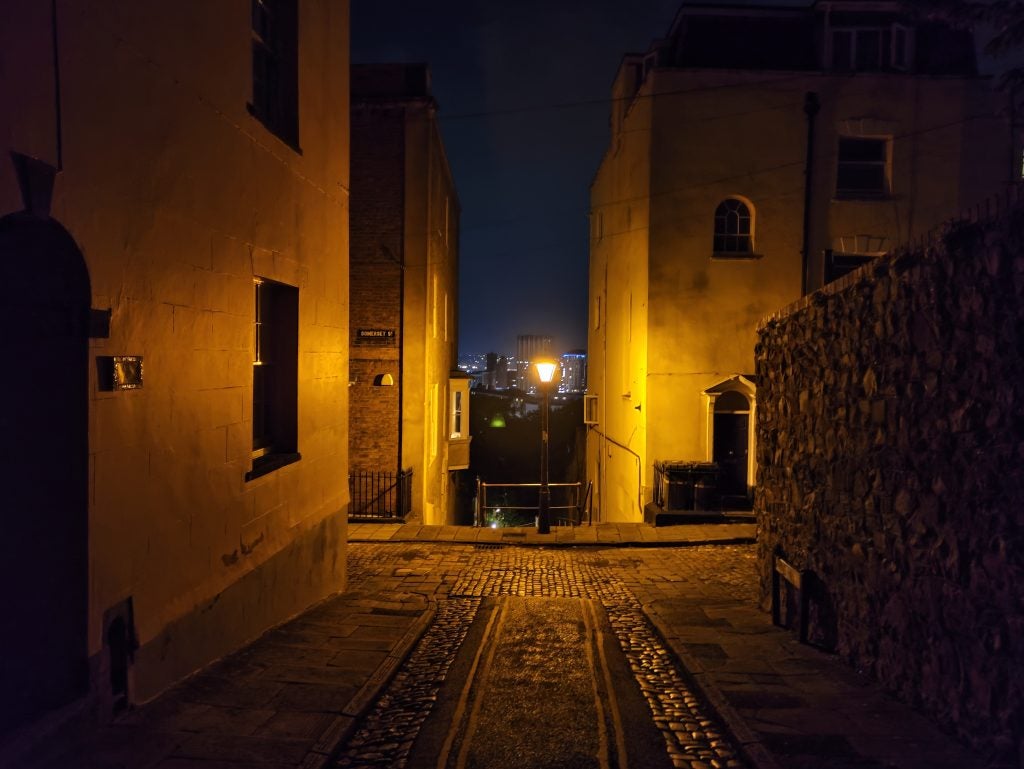 There’s a dedicated Night mode, and it’s reasonably effective at brightening up darker scenes, but it does throw up the odd visual artefact in darker spots. Again, it doesn’t even approach the best work of Google, Huawei and Apple. When it comes to cameras, you generally get what you pay for, unless you’ve got the word ‘Pixel’ in your title.

That glitzy pop-up 20-megapixel selfie camera is a bit of a disappointment at first, producing weirdly soft and smudgy skin tones. Tap the little symbol and clear the horrible Beautify filters, however, and they turn out to be reasonably sharp. 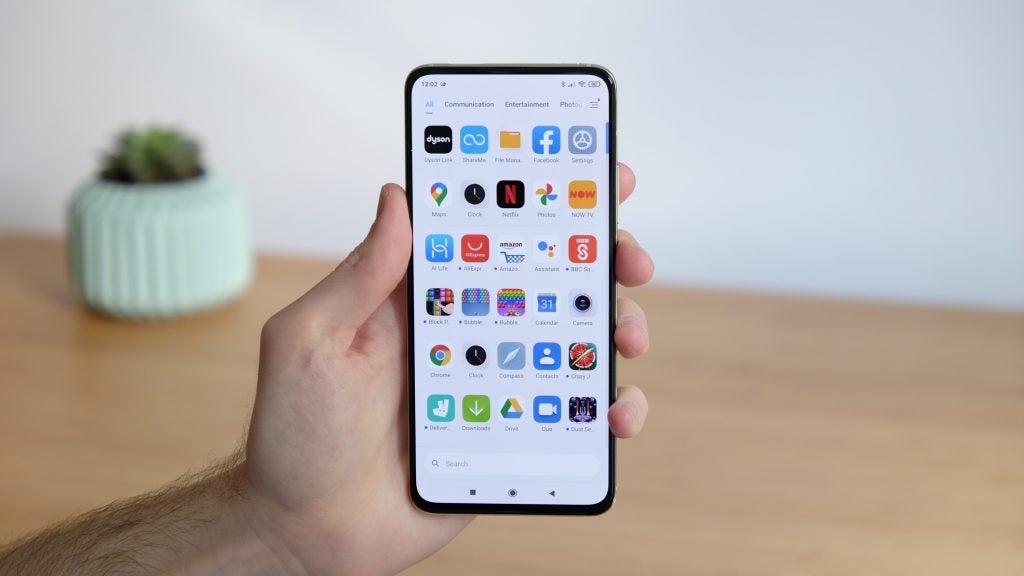 Software – MIUI 12 is much improved, if still slightly cluttered

On the side of the Poco F2 Pro’s box, you’ll find printed the words “With easy access to the Google apps you use most”. A cheeky dig at local rival Huawei, perhaps?

Whatever the case, this is hardly a haven for Google users. By default, most of Google’s apps are crammed into their own folder on the home screen. It’s surrounded by Xiaomi apps such as Gallery, File Manager, Themes, Cleaner, Music, Mi Video, Weather, Notes, Mi Store, and Mi Community, as well as the third party Opera web browser.

You also get a folder filled with a handful of terrible games, and one filled with occasionally useful Tools. And don’t forget the folder marked ‘More apps’, which contains preinstalled third-party apps like Facebook and Netflix. 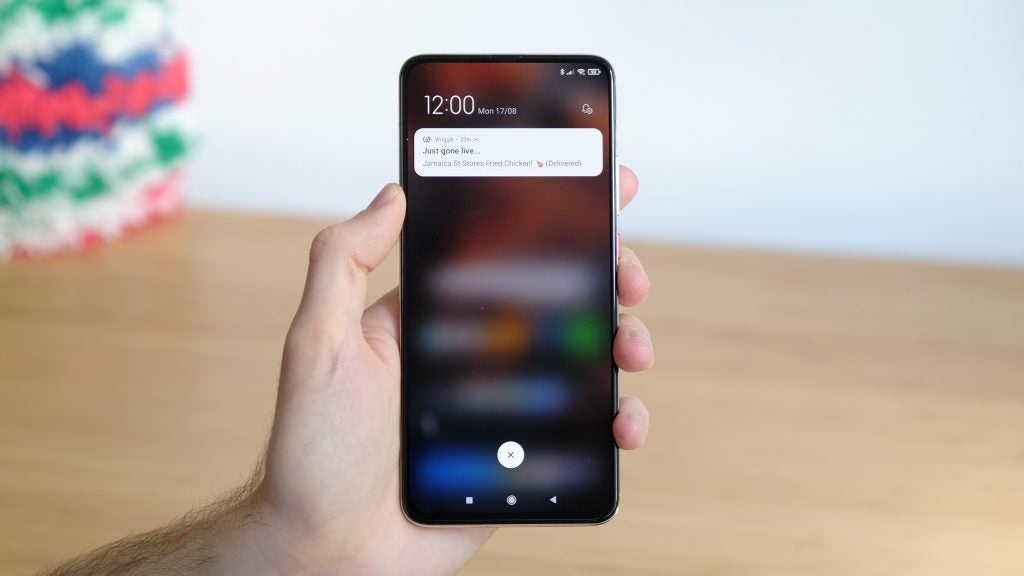 Bloatware aside, Xiaomi’s take on Android 10 is actually pretty nice to use. A few days into the review, the MIUI 12 update came along, and it’s a definite improvement over what came before.

Besides a slightly tighter, tidier and more visually appealing design, you get new split notification and control centre menus in a blatant but successful crib from iOS. You also get the ability to turn notifications into floating windows that partially expand over whatever you’re doing.

Enhanced privacy protection is another part of the MIUI 12 package, making you more aware of the information you’re sharing. And the new animated Super wallpapers are an undeniably classy touch. 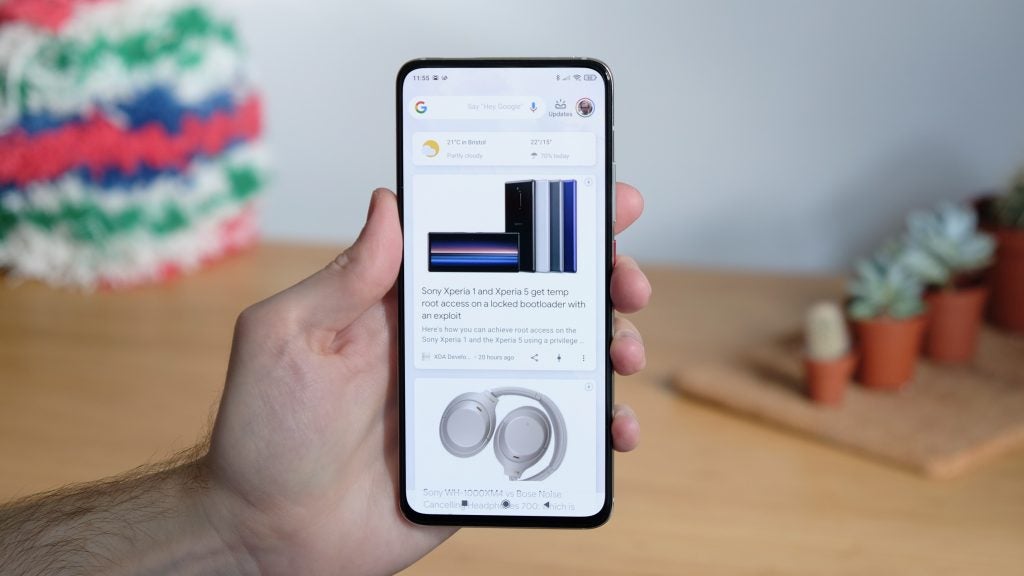 Google’s Feed is the swipe-left option from the home screen and this is the best way of doing things. No dodgy assemblage of recommended apps and ugly news feeds here. 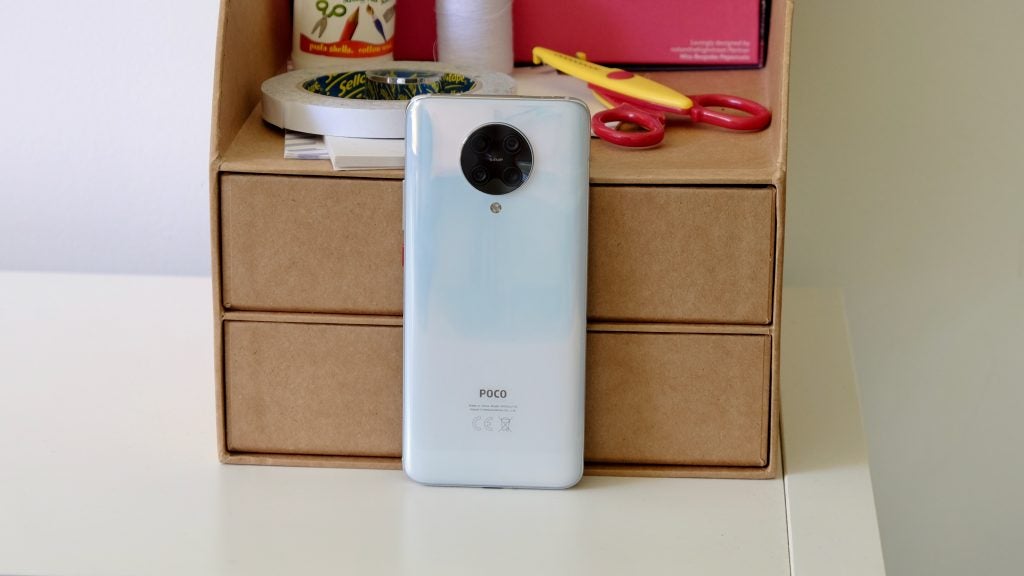 The Poco F2 Pro certainly means business when it comes to stamina. With a 4,700mAh battery, it’s clearly setting its sights on the budget-conscious power users out there.

On light to moderate days, I would frequently turn in with 50% or so left in the tank, pointing to a phone that can handle two full days on a single charge if you’re careful.

On more active days, where use was more intensive – generally involving a bunch of photos, a couple of bouts of gaming, a whole lot of messaging and emailing, and plenty of web browsing – that figure would drop into the 30s. But that should be enough to inspire confidence in all but the heaviest of smartphone users. 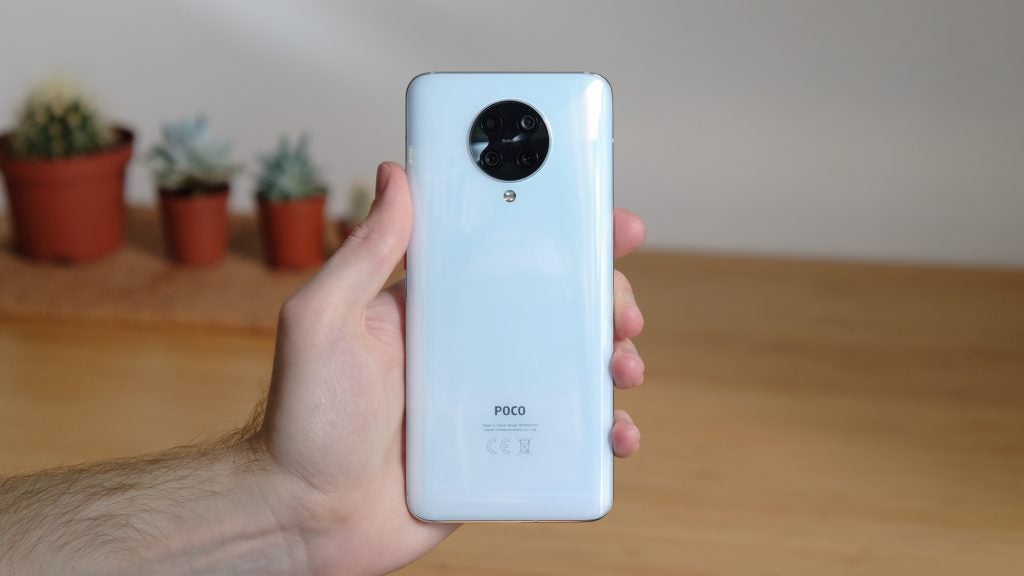 When it comes to media consumption, an hour of solid Netflix streaming with the screen brightness set to half sapped 9% of the remaining charge. That’s a solid result, and certainly comparable with other phones in this price range like the OnePlus Nord.

Xiaomi has bundled in a fast 30W charger with the F2 Pro, which is reasonably snappy at getting you back up and running. I plugged it in with just 19% left in the tank, and it powered up to 48% after 15 minutes. After half an hour that figure had risen to 66%, and 45 minutes got us to 84%.

Should you buy the Poco F2 Pro?

The Poco F2 Pro offers a notable step up in quality from the beloved Pocophone F1, with a more premium (if hefty) design and an ostensibly more advanced camera added to a high-quality processor.

And it’s the phone’s combination of top-end performance and price that makes it one of the best mid-range phones around. If you tend to find the step down in performance provided by most sub-£500 phones unpalatable, this could be the handset for you.

You can get a better camera, cleaner software, and a more fluid display for a little less money in the likes of the OnePlus Nord and the Pixel 4a. But not all together in the same phone, and not with a flagship CPU driving things along.

In terms of pound for pound value, the Poco F2 Pro is capable of making quite a few lesser flagships look a little silly.

Whether it warrants its Pro moniker or not, the Poco F2 Pro is a deeply compelling mid-range handset. There aren’t many phones that offer this level of performance at such a competitive price.