What is the Google PixelBook?

The PixelBook is the best Chromebook on the market today. Google’s Chrome OS ecosystem finally feels like it’s maturing, and spending £999 on a laptop that’s effectively running a beefed-up web browser for an OS no longer feels like a silly thing to do.

As always, it won’t be for everybody. But if you’re after a premium laptop that offers superb battery life and great performance, the PixelBook should sit on your shortlist alongside the Dell XPS 13 and MacBook Pro. 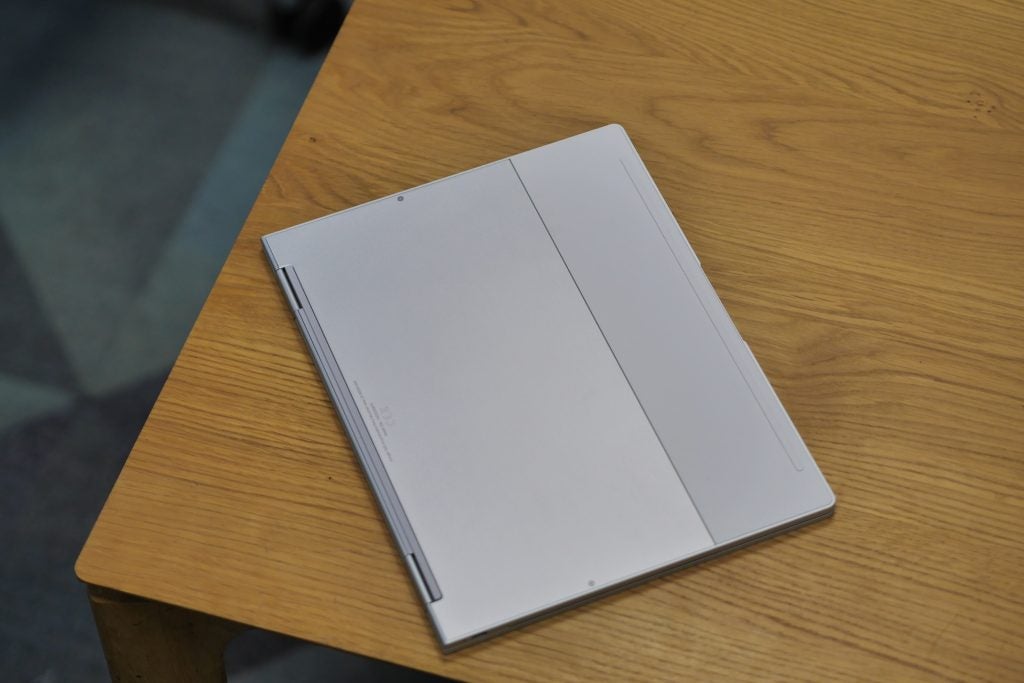 This might be one of the most odd-looking laptops I’ve seen in years: Google has taken the two-tone design from its Pixel smartphones and applied it to this laptop. Unfortunately, I don’t think it works. The casing of the laptop is a weird mix of MacBook Air aluminium and refrigerator shiny white. This works to great effect on Google’s smartphones; less so on the vast expanse of lid on a laptop.

Two-tone turns to tri-tone when you open the lid: grey chiclet keys; a white, slightly rubbery wrist rest; and yet more aluminium. I like the idea of the soft-touch wrist rests, but in practice they’re likely to be a dirt magnet.

Somewhat hilariously, it’s very easy to mistake the base of the laptop for the top, especially at a glance. Both surfaces feature the same proportions of grey and white material, with only the grey rubber grips giving any hint that you’re about to open the PixelBook upside down. Or perhaps it’s just me.

The other slight peculiarity about this machine is the enormous bezel around the PixelBook’s screen. It’s sizeable compared to the bezels on other 2017 premium laptops, and stands out more so because it’s black. The one advantage of this is that the laptop has a larger footprint overall, which in turn means more space for the keyboard and a larger battery.

This svelte piece of kit weighs in at only 1.1kg, which makes it one of the lightest sub-£1000 Ultrabooks you can buy today. Google ditches standard USB ports for USB-C connectors, but this isn’t a huge issue here since Chromebooks are all about online connectivity; I’ve rarely found myself connecting USB drives to Chromebooks. I’m disappointed by the lack of an SD card slot, however – get ready for a life of dongles and adapters. 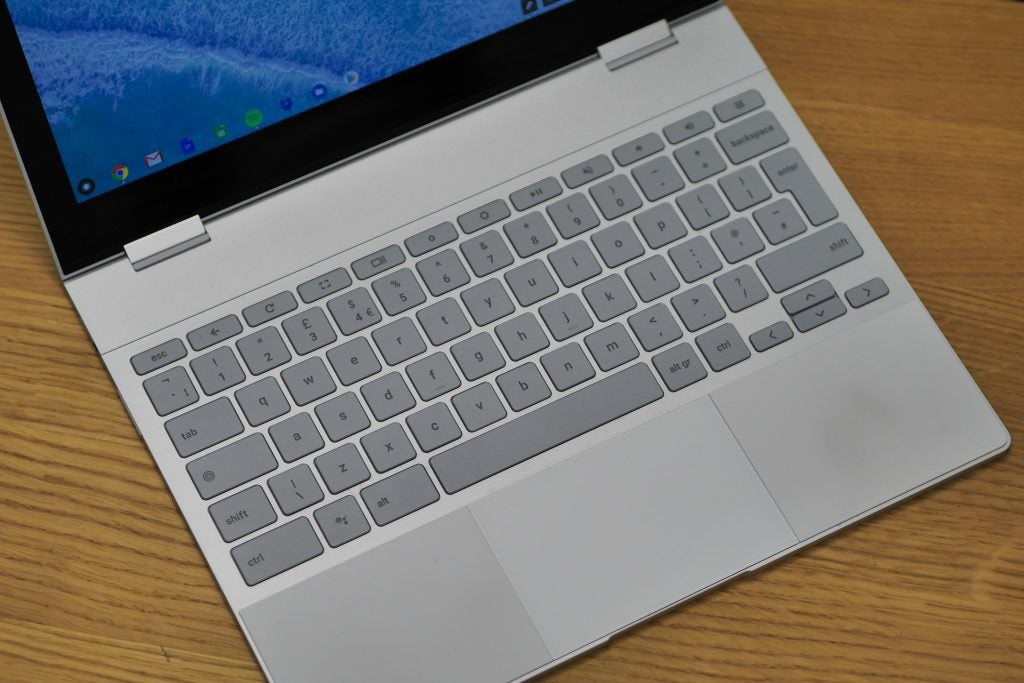 The PixelBook’s inputs are best described as refined. The keyboard doesn’t offer the most travel, but it is responsive and satisfying to type on. It’s also backlit, although this is controlled by an ambient light sensor. I couldn’t find an option turn it on and off manually.

There are a number of layout oddities for anybody coming from a Windows laptop or MacBook. The top row of keys are dedicated to specific functions, while the Windows or Cmd key here is a Google Assistant button. Caps Lock brings up a search bar for your apps or Google, which is actually quite annoying. However, you can turn on Caps Lock by hitting Alt+Search instead.

More bothersome is the lack of a Del key. You can simulate it with Alt+Backspace, and full-word deletion with Ctrl+Alt+Backspace. However, it seems like needless culling of an important key, especially when you consider that Google has added not one, but two ways to open its search engine.

The touchpad is smooth and responsive, and up there with the best on the market. It’s precise for gestures including pinch-to-zoom, three-fingered tab switching, and two-fingered page-forward and backward navigation. 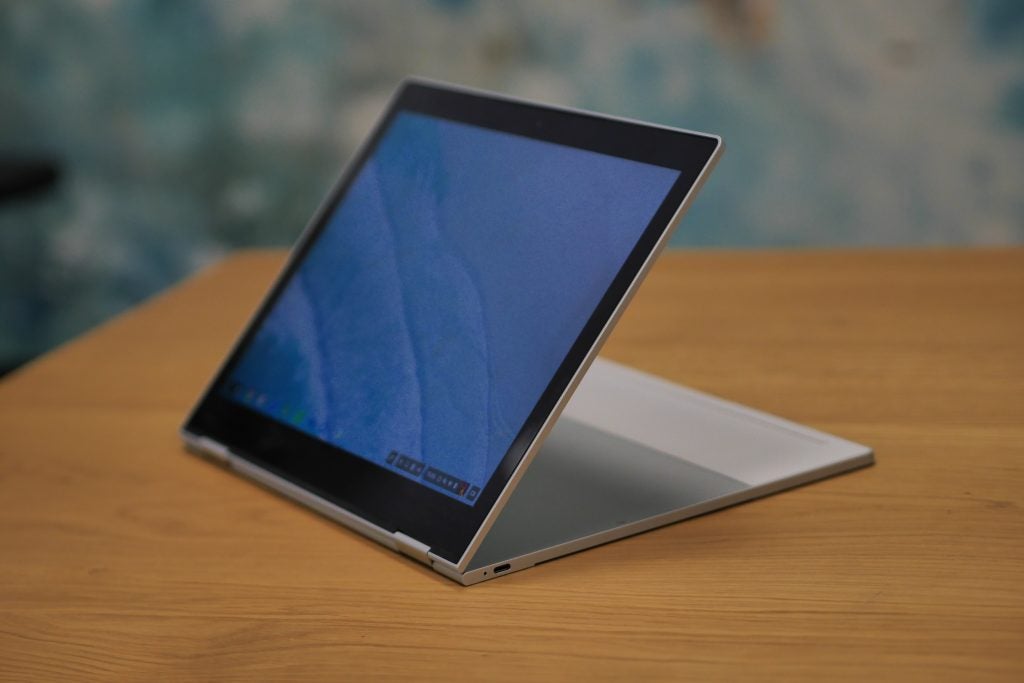 Given the PixelBook literally has a piece of screen jargon in its name, you’d expect this pixel-packed panel to be excellent. I’d say it’s pretty good in many aspects, and fairly average in others. First, the good: brightness is spectacular, up at nearly 500 nits. That’s near MacBook Pro levels of brightness. Contrast is also great, with deep blacks leading to huge 1498:1 contrast levels.

But colour coverage is a bit disappointing. Yes, it covers 96.2% of the sRGB colour gamut, but photographers and folk working with physical media such as print and 3D modelling will be disappointed that the panel makes no attempt at rendering more challenging colour gamuts such as AdobeRGB. For a laptop that prides itself on its creative potential, this is disappointing. But, for the money, it’s also hardly a surprise. The 2400 x 1600 resolution is also a bit of a misnomer; the laptop runs at a lower resolution in order to make objects and text on screen legible.

The speakers are a little disappointing. They’re no worse than those featured on any other thin and light laptop, but they don’t offer anything like the loudness or mid-range response of the units on the MacBook Pro. They’re fine for speech, but not ideal for music.

The ability to bend the screen around into various modes, including Tent mode, is useful, but not essential. The capability only really comes into its own when you’re using the stylus. However, given that this is a costly extra, I don’t imagine many people will be shelling out for one. 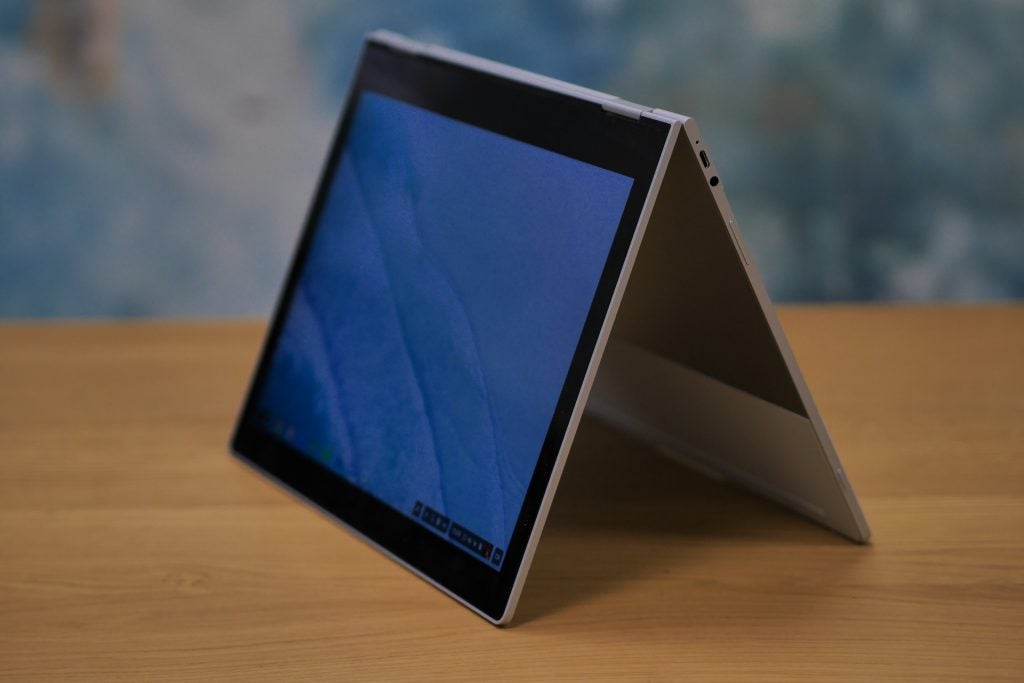 Used as our main laptop for the review period
Tested for at least a week
Used consistent benchmarks for fair comparisons with other laptops
Reviewed using respected industry benchmarks and real world use
Next
Software, performance, battery and conclusion Review