Chrome OS has progressed somewhat since I last reviewed it. For starters, on some devices it now runs Android apps, and the design of the OS has changed to reflect this. It might have come of age, but it isn’t yet fully mature.

Chrome OS is centered around the Chrome browser. All your web pages and web apps – including Google Docs, Gmail, Pixlr, Grammarly, LastPass and many more – will open in standard Chrome tabs. But apps such as Adobe LightRoom, Play Store apps, Files and Settings open in their own separate application windows.

This can leave you in the weird situation of being unsure over needing to Alt+Tab over to a different window or use the three-finger tab gesture to move between browser tabs. This is a moderately annoying workflow issue, especially if you’re a power user. And if you’re buying a £999 Chromebook, it’s likely that you’ll be wanting to have a fair few tabs and windows open. 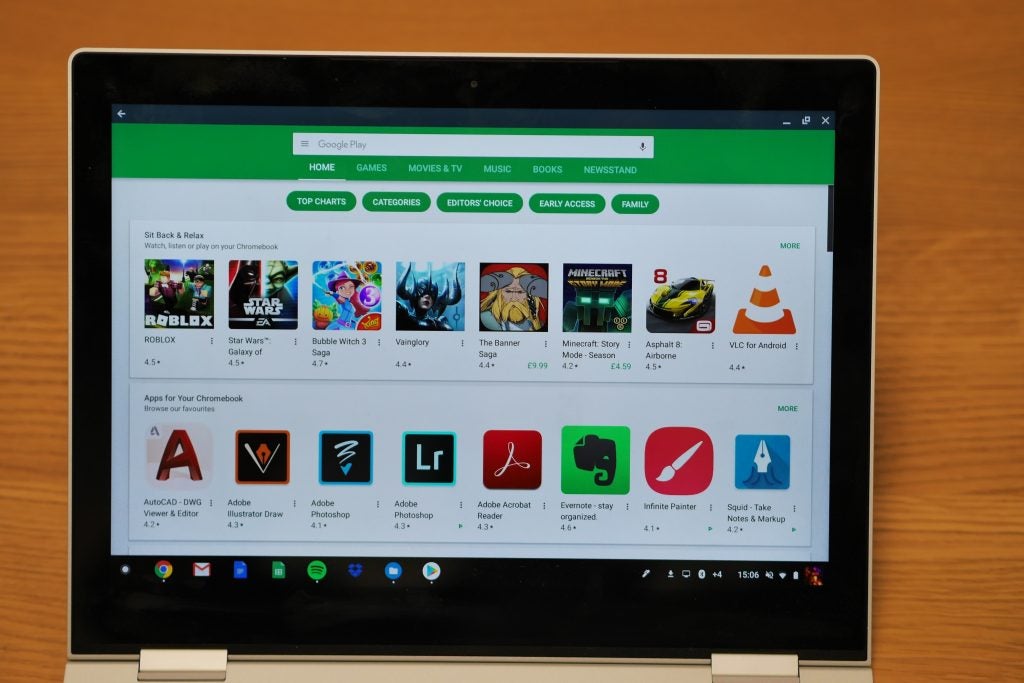 You can at least set specific icons to open as separate windows by right-clicking on the icon in the taskbar. This means you can set a web app to open as its own app window, instead of inside the regular Chrome browser.

There’s a notification tray on the bottom right, next to the clock, plus Wi-Fi and battery status indicators. These notifications quickly pile up since they encompasses all your Android app notifications, file downloads and media playback buttons. It takes at least two clicks to clear them all, and they look very cluttered.

Beyond that, the ability to run Android apps is obviously great. What’s less great is that there are very few apps optimised for a windowed experience. The Spotify and Twitter Android apps, for example, open as if they’re being run on a phone, stuck in a tiny portrait mode, or a full-screen mode. Some apps, such as the Santander banking app, can’t be installed at all. Others, such as Motorsport Manager 2, can be downloaded but immediately crash. Real Racing will play, but only with clunky motion controls or on-screen buttons. Basically, the experience is best described as being potluck.

The ability to open Spotify as a web app is excellent, but the dedicated play/pause button on the keyboard works only when the Spotify web app is in focus. If it’s running in the background, the play/pause button won’t do anything. I don’t want to labour the point, but again, this wastes a valuable key that could have been used for the Delete key. I’m not bitter, honest.

There are some apps that are optimised for Chrome OS. These include Photoshop LightRoom and Sketch and a basic version of Illustrator. Slack has also been optimised, but it’s inferior to the web app version.

Apps that have been optimised for the stylus are great, offering a lag-free experience that’s about as natural is it comes. But not all are optimised, and if your app is relatively niche, you can bet your bottom dollar it won’t work as well with the pen. The experience will be more akin to using a finger than a proper stylus. That is to say, non-pressure-sensitive and kind of laggy.

A little concerning is the fact that Google Play Movies & TV content can’t play in HD on this device, and neither can Netflix. This is a DRM issue that Google says it is working to solve. 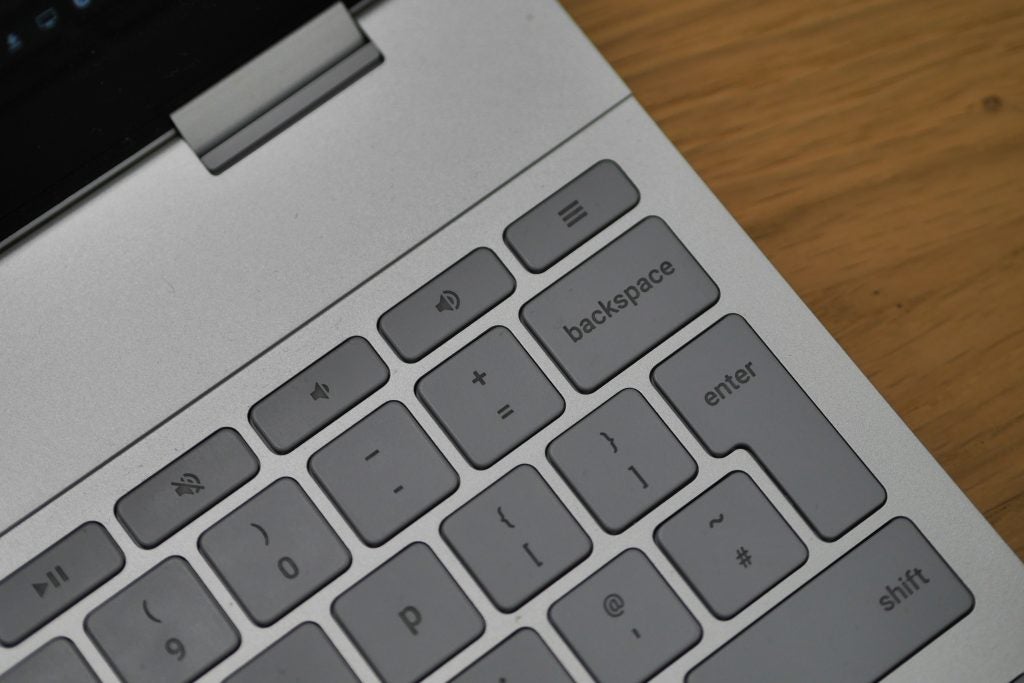 The £999 PixelBook is powered by a dual-core Intel Core i5-7Y57 processor running at a maximum speed of 3.3GHz. It runs completely silently (the Y in the mode name indicates an ultra-low-power processor), but in spite of this I’d have bet significant cash on this being a higher-end chip.

It performs brilliantly, precisely because this chip is designed for short bursts of activity. Unlike Windows laptops, where there’s normally a steady load of overhead processes being undertaken, Chrome OS never feels like it’s being overworked. That means the processor is ready to rumble on demand, whether to render a photo or open a web page. Chrome is a known RAM hog, but with this 8GB machine I never got to a point where I’d run out of memory.

The PixelBook’s battery life is astonishingly good. Based on my experience, it comes very close to affirming Google’s claims of 10 hours. While I never got quite that far, I could easily manage a full day of work without having to dig out a charger or find a wall socket. That peace of mind is valuable, especially if your lifestyle or job require you to be on the move. 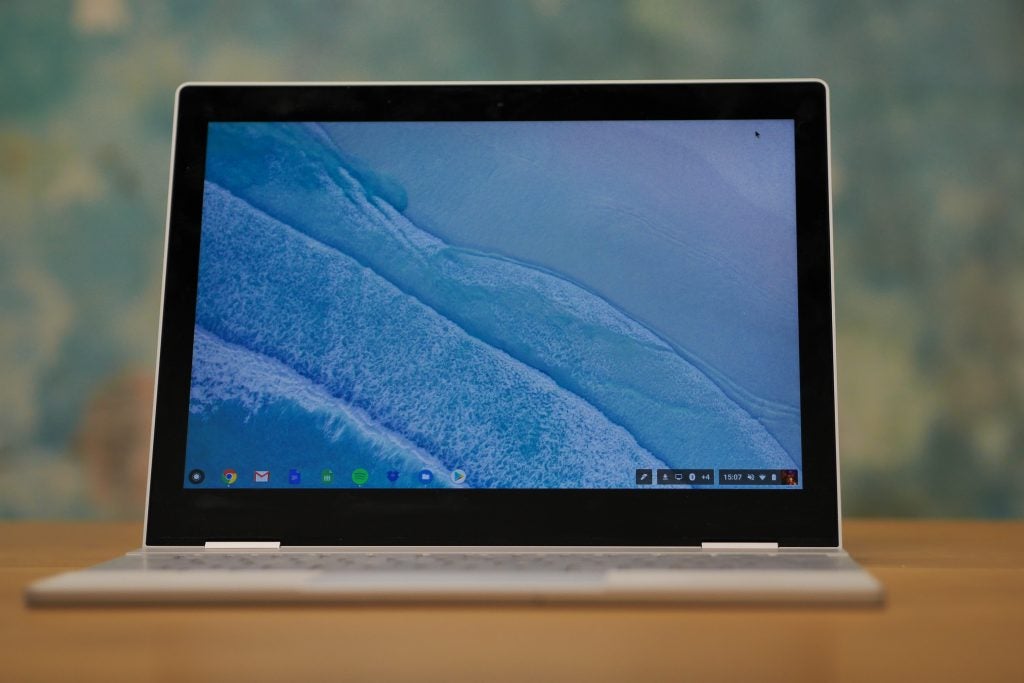 Why buy the PixelBook?

The PixelBook is the first premium Chromebook I’d truly recommend. It isn’t perfect on the software side of things, but it’s more than usable for almost any task you’d throw its way. Of course, the usual uncertainties about whether the software you like to use will actually be available remain, but that’s a consideration you’ll have to make yourself.

Overall, its keyboard oddities and Android software weirdness fall into insignificance next to great performance, awesome battery life and a thin and light build. This is a truly desirable laptop.