One of the truly beautiful things about gaming is the freedom that developers now have to source funding and to create the kind of projects they’re truly passionate about. The original Pillars Of Eternity – a vast, complex and ocean-deep RPG from Obsidian – was crowdfunded by a global army of fans who were more than prepared to put their money down to prove that there was a clear appetite for a sub-genre that big publishers have, understandably, shied away from in the past decade.

The original game went on to great success, re-establishing Obsidian as a studio in charge of its own destiny – rather than just relying on (admittedly often excellent) project work such as Fallout New Vegas and South Park The Stick Of Truth. And in Deadfire, the even-larger and somehow even-denser sequel, you can feel the passion and commitment Obsidian has to this series and genre in every pixel.

It’s important to note that as good as Pillars Of Eternity 2: Deadfire is, it isn’t for everybody. Those with a genuinely short attention span may struggle – there are long conversation trees, a deep roster of characters with interwoven and ever-changing relationships, a seemingly endless amount of guides, tutorials and systems, and a pace that may seem glacially slow if you’re used to action games. 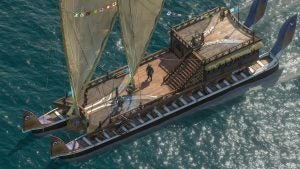 However, if you know what you’re getting in to, or like the idea of diving headlong into an enormous and life-consuming RPG that requires patience, dedication and concentration, then Pillars Of Eternity 2 Deadfire could well be the masterpiece you’ve been searching for. Like a great book, this is a layered, dense and challenging game.

You play as The Watcher, the lead from the previous game who has the ability to speak to the dead. While previous knowledge of the game’s past is helpful, you absolutely don’t need to have played the original, and while you play as a specific character, there’s huge variance in class choice, loadouts and personality traits.

This time, the action takes place across a huge Deadfire archipelago, meaning you’ll actually be doing a fair bit of seafaring on your rather splendid vessel, The Defiant. Before that, however, you’ll need to get to grips with the core gameplay loops, the conversations, the questing and, of course, the combat.

Pillars Of Eternity 2 uses a dynamic pausing system so, technically, combat plays out in real-time. But you can line up your attacks by pausing the on-screen action, and letting your characters go like a coiled spring. This allows for both tactical depth and the frenetic pace of real-time, meaning combat can often sit between being thoughtful like a turn-based strategy game, and manic like Diablo. 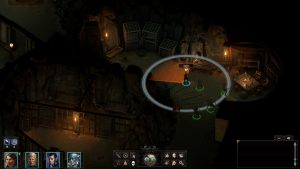 As is the style, you play as a member of a larger party, so you’ll need to be tactically astute in how you buff your party members and combine their various powers to succeed. There’s a system that allows the game’s AI to select all your party’s abilities automatically, should you rather concentrate on yourself, but the real magic comes from delving deep into every menu and conjuring up a concoction of powers that suits the specific encounter you find yourself in.

Beyond combat, those familiar with the genre will know the score. You click around the environments to move about, and almost all quests and moments of importance arise from conversations. Obsidian has consistently proven itself as operators at the highest level of the game when it comes to branching dialogue and strong, character-driven writing – and this is some of the studio’s finest work.

It would take over a hundred hours to find every possible conversation across this huge archipelago, but it’s worth the investment. Every interaction enforces the world or the story (you’re on the hunt for a giant, by the way), or proves so interesting that you’ll actually forget about the main quest and become utterly enraptured by whatever you’re being asked to do.

Following a short and tightly controlled prologue, you’re free to explore and take as much time as you want in Deadfire. Dedicated players could easily spend months here.

And if you do want to explore, you’ll need that ship. Don’t expect Sea Of Thieves, though: this is still a point-and-click affair and, as such, sailing in Pillars Of Eternity 2 does feel a little clunky. However, there is enough taking place on board your vessel, and dangers from outside, which makes the sailing totally forgivable.

You’ll spend time managing the morale and interactions of your crew. This almost becomes a game in its own right, as you make tricky decisions over your crew’s food, or seek out distant islands to hire new members away from drunken nights at the local tavern. 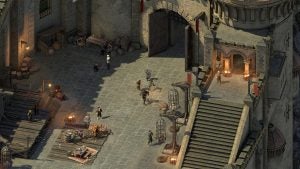 There’s plenty of fighting to do on the high seas, too. Here, the combat does actually become turn-based. You’re whisked away to a different screen, and have to carefully plan out your actions from a menu – be that moving your ship, adjusting speed or, of course, firing. Like the best turn-based games, stories blossom out of the slow pace and ever-changing battlefield, and it’s possible to even capture memories of the genre’s standard bearer, Xcom, in the dramatic encounters on the ocean.

Pillars Of Eternity 2: Deadfire is a truly superb RPG from the masters of the genre. Unlike, say, a Bethesda game or even The Witcher 3, this isn’t an accessible entry point for curious newcomers; it’s a game that demands the kind of attention and commitment that is rare in 2018. However, if you have that mindset – and the time – then you’ll discover one of the deepest, densest and most rewarding Role Playing Games in years.