Available on Xbox 360 (version tested), PS3, PC
We all know the sad story of South Park: The Stick of Truth. It was first announced in 2011, then shown in 2012, then delayed in 2012. It got caught up in the fallout of THQ’s dismal demise and put back to 2013 then 2014. And it didn’t even make its final release without controversial cuts in the European version.

The good news is that none of this – well, maybe the cuts – is clearly visible within the finished game. The Stick of Truth might not be perfect, but it’s every inch a great South Park game. 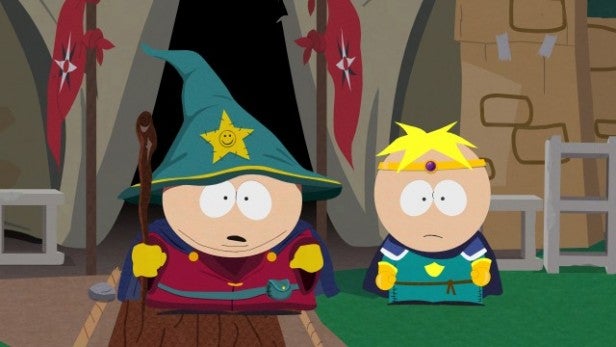 Earlier South Park game adaptations suffered the fate of so many video game tie-ins: they went to publishers and studios who didn’t have a clue, and simply wrapped an FPS or kart racer in a South Park skin then added farts and samples of Cartman’s potty mouth.

South Park: The Stick of Truth doesn’t make this mistake. Amazingly, an old-school RPG turns out to be the perfect fit for the property, partly because everything else in the game keys into the conceit. We all know the kinds of games and movies that Cartman, Kyle, Stan and Kenny play, and The Stick of Truth is right up their street. It has even been referenced in the trilogy of South Park episodes that began with ‘Black Friday’.

READ MORE: Xbox One vs PS4

South Park: The Stick of Truth – What’s it all about?

The premise is brilliant. The kids of South Park have divided into factions, each engaged in a Warcraft-styled fantasy that’s playing out on the town’s mean streets. The humans, led by the great wizard, Cartman, are battling the elves, led by Kyle and Stan, with the prize being ownership of the Stick of Truth; an object of mysterious (not to mention imaginary) power.

You play a new kid who has just moved into South Park, and it’s seconds before you’re caught up in Cartman’s web of hand-me-down fantasy. Beneath it, South Park is still South Park, with all the suburban parents, witless gun nuts, poorly-hidden meth labs and badly-voiced celebrity cameos you’d expect. It’s just that on top of it, there’s a swords and sorcery realm where the two factions are fighting for supremacy. 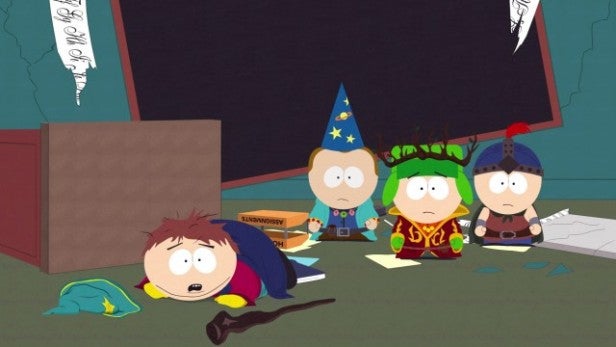 This concept permeates everything. The arms and armour of South Park: The Stick of Truth are the stuff of improvised dress-up, with a bunch of cruel, deliberately offensive twists.

Little kids become elves who must be beaten unconscious, while adults are transformed into tough boss battles. Tools and sticks become deadly weapons, and hazardous items spells. Forget throwing fireballs and lightning bolts at the enemy, in South Park: The Stick of Truth you’re waving a firework in some poor little devil’s face, and hoping that his hair catches fire for extra damage.

Special attacks involve gross-out-causing kisses and burning gaseous emissions from our heroes’ very butts, and the air of battle is thick with the stench of blood, excrement and vomit. Needless to say, even if your kids have cute South Park T-Shirts and lunchboxes and the rest, you really, really don’t want them to play The Stick of Truth, mm’kay?

The combat is a variation on the classic turn-based scheme. In each turn your new kid and his current team-mate have one special action and one attack apiece, though you have to remember to use any special action, like drinking a potion, before the attack.

You move first with an attacking move or spell, then the enemy gets their riposte. The team at Obsidian has also added a few wrinkles, like giving your foes different stances that demand different approaches, or making timing part of the system. With carefully times presses of X, A or Y you can block incoming blows and earn a free counter-attack, or maximise your damage with a heavy blow or accompanying chuff.

Incoming barbed wire arrows can cause bleeding conditions with ongoing damage, while fire can do the same with burning. The combat looks like knockabout stuff, and with the dialogue and animations it’s also very funny, but there’s actually more to it than you’d think. 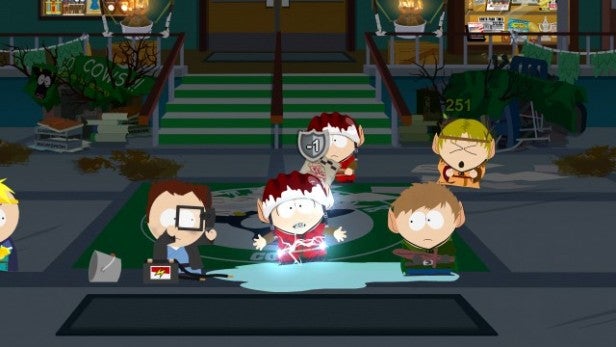 The same goes for all the game’s systems. Whether you’re looking for weapon and armour upgrades, character and skill progression, perks, side quests, fast travel, inventory management or any other RPG staple, you’ll find a South Park equivalent here.

This isn’t some RPG-lite but a fully-fledged RPG made by a developer who knows how to make them. The only difference is that Fallout or Baldur’s Gate went a whole lot smaller on the f-bombs, assorted, highly-offensive slurs and toilet-themed trash talk. Even the menus and status screens are given the South Park treatment, themed around a Facebook-like app on a poorly-styled smartphone.

There’s no question about it: South Park:The Stick of Truth is funny. It’s funny because it riffs on all the things that make South Park so offensive, shocking and always entertaining, and because it also knows about games and gamers, and what makes both ridiculous. It’s funny because a badly-drawn, foul-mouthed psychopathic ten-year-old is pretty funny, and no foul-mouthed psychopathic ten-year-old is funnier than Eric Cartman.

The visual style also couldn’t be smarter. Previous South Park games made the mistake of trying to render the characters and settings in 3D, but The Stick of Truth sticks to the poorly drawn and animated 2D style of the show, and even uses deliberately ropey scaling when the characters move forwards and backwards in the scene. It’s hard to imagine a more authentic adaptation, and while it causes the odd problem for navigation, we’d rather have the game looking and feeling right. 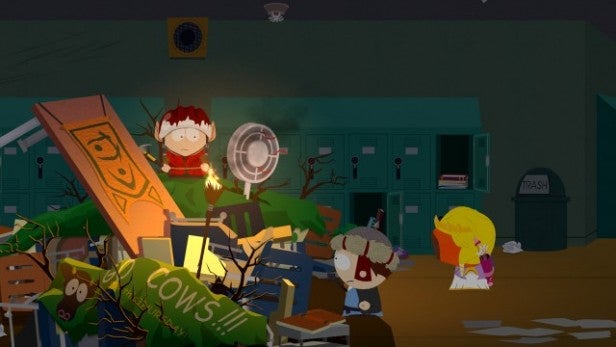 But here’s the thing: while South Park: The Stick of Truth is always great fun, and often side-splittingly funny, that probably has more to do with the inspired premise and the brilliant dialogue than actual quests. You’ll find yourself searching for heroes, breaking a master thief out of detention or rescuing the lovely Princess Kenny from a fiendish elven bard. But it really all boils down to exploring the South Park area, handling a lot of simple ‘put item here’ or fetch quests, and battling against the elves and their sometimes unwitting accomplices.

In other words, it’s all fairly basic and repetitive – not to mention almost pitifully easy. And though the game throws in puzzles, these rarely go beyond finding item A to open item B, or using your powers or another hero’s powers in a specific situation. Sure, that’s not a problem when the situation involves flammable objects and your nefarious gas-manufacturing talents, but a little bit of South Park: The Stick of Truth goes quite a long way. As funny as it is, it’s not a game you want to play for hours at a trot.

Does this matter? Maybe not. There’s still enough variety in the combat and the scenarios to keep you coming back for more, and you’re never more than five minutes away from another brilliant gag, or at least another hugely offensive chunk of gross-out humour. You might think the game has peaked early when it introduces you to ‘Dragon Shout’, but this turns out to be just the beginning. This South Park RPG is always worth playing for the South Park portion, even as the RPG bit grows ever so slightly stale.

If you like South Park, you’ll like this is a classic cop-out verdict, but that’s the truth of The Stick of Truth. For all its surprisingly deep systems and knowledge of RPG lore, the quests can be unimaginative in their details, but it’s hard to notice when you’re tossing noxious emissions at your enemies, watching the good Paladin Butters wield his mighty hammer, or training with the Grand Wizard, Cartman. It can wear thin over the length of the game, but The Stick of Truth is laugh-out-loud funny. It’s that rare game adaptation that gets to the original’s obnoxious, irreverent heart.

Next, read more about Fallout 4