What is the Phillips Fidelio M2BT?

The Philips Fidelio M2BT are wireless headphones designed for people who want to wear them out in town, rather than just at home. They cost around £190.

While there’s the usual Bluetooth tax when it comes to the sound-price ratio, they make a good alternative to the Sennheiser Momentum On-Ear and V-Moda XS if you must have wireless audio. Philips also seems to have addressed some issues since the previous Fidelio M1BT model. 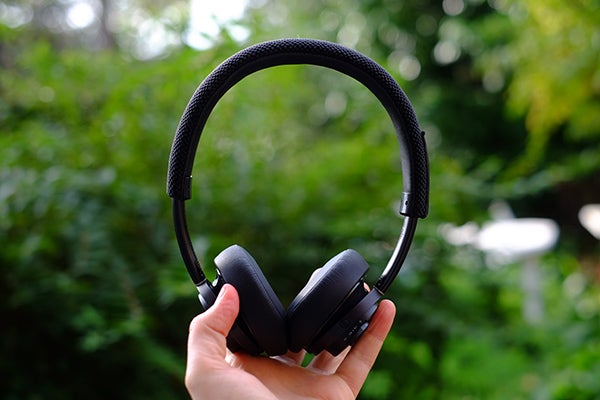 The Philips Fidelio M2BT are on-ear headphones, the kind you can wear out and about even if you’re over 30, have a bit of a paunch or are thinning on top. Or all three.

That’s not to say they’re devoid of style or wouldn’t suit a young crowd, but the all-black design of the Philips Fidelio M2BT doesn’t give them the aggressive presence of some other style headphones.

The look and build of the Philips Fidelio M2BT are all top-notch. The frame is metal and the headband is covered with fabric of a texture similar to the diamond-embossed earcups.

You get a hint of urban flavour, not a month-long residency in a urine-soaked underpass. 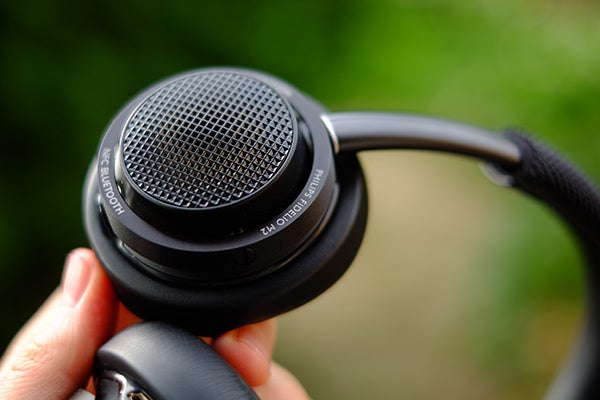 Comfort is another win, if one with caveats. In order to keep the Phillips Fidelio M2BT secure on your head, should you take them out running or to the gym, the headband tension is relatively strong, but the pressure is expertly spread across a couple of lovely synthetic leather and mesh-topped memory foam pads.

The softness here is similar to the B&W P5 headphones, but with a much more secure fit. We did find they can cause a bit of cartilage discomfort after a few hours’ use, making us wonder whether the pads could do with being even thicker – but this would likely undermine their grip, too. It’s a balancing act. 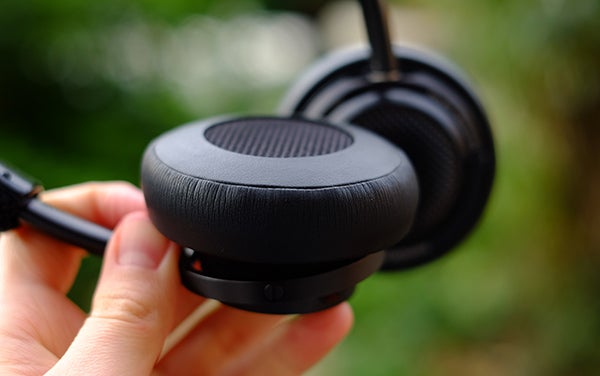 Another thing the design gets you is very good sound isolation. They’re among the better on-ear headphones for blocking out the exterior noise, making them perfect for public transport and muffling the offensive rubbish they might play at the gym.

The Philips Fidelio M2BT offer loads more features than your average pair of headphones. That comes with the territory in a wireless set, but these go a step further.

As well as Bluetooth, you get NFC and aptX. NFC is used to pair the phone with the headphones without fiddling around too much in the menu system. I found it more comfortable to just do the setup manually, though – holding up a phone to your headphones in public both looks and feels a bit weird.

Still, it’s there if you want it, and is optional. 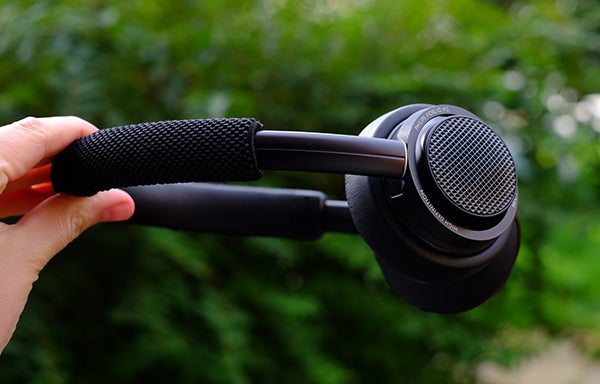 There’s also 3.5mm jack that lets you plug in a standard cable if you run out of battery, are using a non-wireless source such as an iPod Classic (RIP) or simply don’t fancy going wireless. The cable is a nice ’n’ chunky fabric-covered affair. 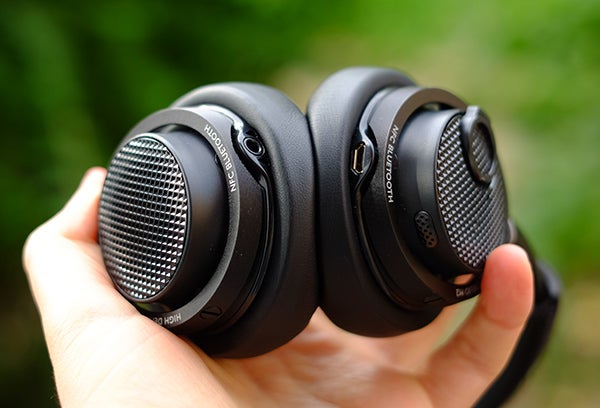 It doesn’t have a remote control or mic, though. All of that’s handled on the headphones themselves.

There’s a flicky controller that lets you take calls and change volume on an Android phone, or control music on an iOS device. There’s also a microphone on the bottom of one earcup, acting as a call mic.

The remote and microphone only work when hooked up wirelessly, not with the cable attached. 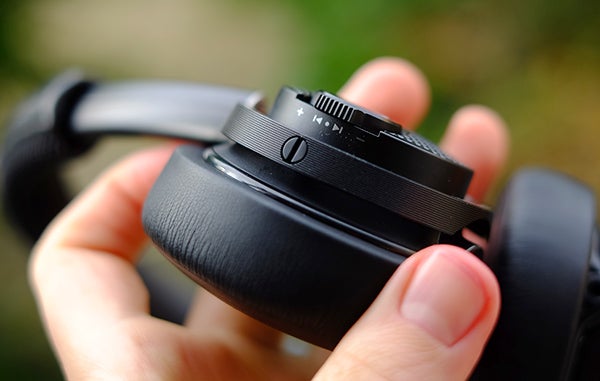 There are significant sound benefits to going wired with the Fidelio, if you’re stuck with a non-aptX phone – plenty still don’t have it, including the iPhone 6. Without a wired connection or aptX, the bass is rather one-note and unrefined, and the top end is harsh and fatiguing.

If using a non-aptX phone, the sound quality doesn’t really match up to the M2BT’s price. That’s really to be expected, though – at the best of times Bluetooth doesn’t offer an audiophile-grade experience, and aptX just offers a mostly satisfying compromise. 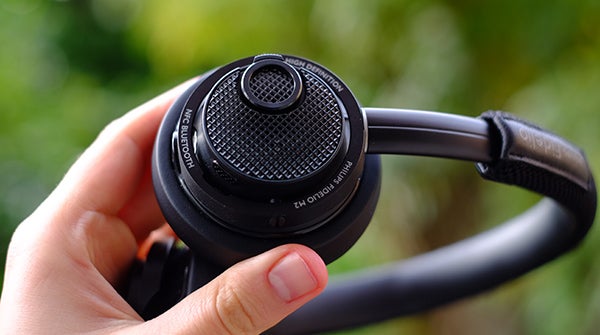 However, if you’re stuck with the standard Bluetooth SBC codec, the Fidelio M2BT headphones still make sense – the design is great for running and using in the gym, where wireless transmission may matter a whole lot more than truly top-notch audio. They certainly don’t sound awful, though, just not worthy of the reliable Fidelio name.

That all changes when you go wired or use an aptX-capable device. The treble smoothes out and the bottom end loses its unrefined character. The Philips Fidelio M2BT suddenly become the headphones we expect at the price.

The Philips Fidelio M2BT have quite a warm tone, providing a fairly lush sound that – quite removed from the performance with standard Bluetooth streaming – is easy on the ears and non-fatiguing. It’s an enjoyable sound that, when partnered with a nice, wide soundstage for an on-ear headphone, provides expansive scale. This is something you don’t often get in headphones of this size, especially not wireless ones.

While the bottom end – the bass and lower mids – get a boost in the Philips Fidelio M2BT, sound balance is otherwise pretty good, providing a fairly natural tone. That’s something you need in order to produce ‘real-sounding’ vocals.

Treble detailing could be improved, though. While we find the level of detail on offer perfectly fine, those looking for the more delicate ‘hi-fi’ sound by forking out this much cash would be better off with another pair. Although we admit no wireless sets in this class come to mind.

We had an awful lot of connection issues when reviewing the original M1BT, but all we experienced with the M2BT was a little fluttering of the signal during the early stages of connecting to some phones. And we do stress some phones — there are two sides to any Bluetooth exchange.

The battery lasts for around 10 hours off a charge – enough for a week’s daily light use (for the commute perhaps), or a couple of days for people who want to wear the Philips Fidelio M2BT all the time. They use the same micro-USB charging socket as Android and Windows phones, so unless you’re an iPhone user you should have no trouble finding a spare charger. You do get a cable in the box, of course.

Considering you can also carry on using the Philips Fidelio M2BT when the battery’s dead, they’re pretty easy to get on with in day-to-day life. 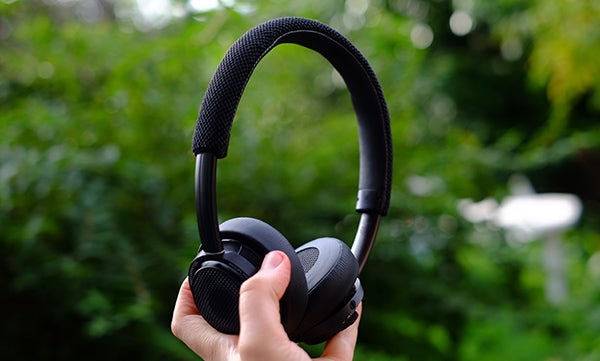 However, there’s one other thing to consider, and once again it comes down to the limitation of Bluetooth. When not using an aptX device, the audio lag in the Philips Fidelio M2BT is really quite bad, to the extent that streaming from Netflix or watching downloaded movies isn’t too much fun at all. The lip-sync disconnect is just too jarring.

The latency of standard Bluetooth is 100-200 milliseconds, and judging by our experiences the M2BT is towards the worse end of the spectrum. However, this is massively improved using aptX, and of course there’s no discernable lag when using a wired connection.

Should I buy the Philips Fidelio M2BT?

After finding the M1BT disappointing, the Philips Fidelio M2BT are a refreshing improvement. While the biggest change is the addition of NFC, we were also much happier with both the Bluetooth performance and the sound quality when used wired or with an aptX device.

The Bluetooth tax still applies — if you don’t really want or need Bluetooth, don’t kid yourself that you’re not paying for it in the Philips Fidelio M2BT. Something like the Audio Technica ATH-M50x offers sound that’s at least as good, at a shade over £100.

However, if you’re truly keen on Bluetooth, this is one of the very best options at the price. Good looks, decent comfort and a design that lets you use them while exercising all give the M2BT great versatility. And the last is something you don’t get as much of with the rival Bose AE2W.

Strong all-round performance makes the Philips Fidelio M2BT one of the best pairs of Bluetooth headphones, and a healthy upgrade over the previous model.