Update: The online mode is up, we’ve played it, and as a result, Max has delivered unto us a score. Enjoy!

Even the buzz of the World Cup can’t quite match the start of a new club season. And for the first time in years there’s a brand-new football sim out mere weeks after leagues all around Europe have kicked off. PES 2019 is out a full month before FIFA 19 hits shelves and that instantly gives the Konami title a brief advantage.

If you’re looking purely for new ‘headline’ features, then PES 2019 might disappoint. Unlike FIFA, which employs glossy terminology to hype up fairly run-of-the-mill updates, Pro Evolution Soccer seems much more subtle in its approach. Konami says there are some updates to the Ultimate Team baiting MyClub mode including legends like David Beckham, visual improvements across the board, improved first touches and something called ‘Magic Moments’; a way of more accurately showing off distinct playing styles. On paper it seems like a typical yearly update struggling to warrant its asking price.

Yet, play PES 2019 for a couple of hours (heck, even play it for a couple of games) and it’s clear to the see the refinements under-the-hood are far more important than anything else. This is football simulation at its absolute finest – well, at least when you’re on the pitch. 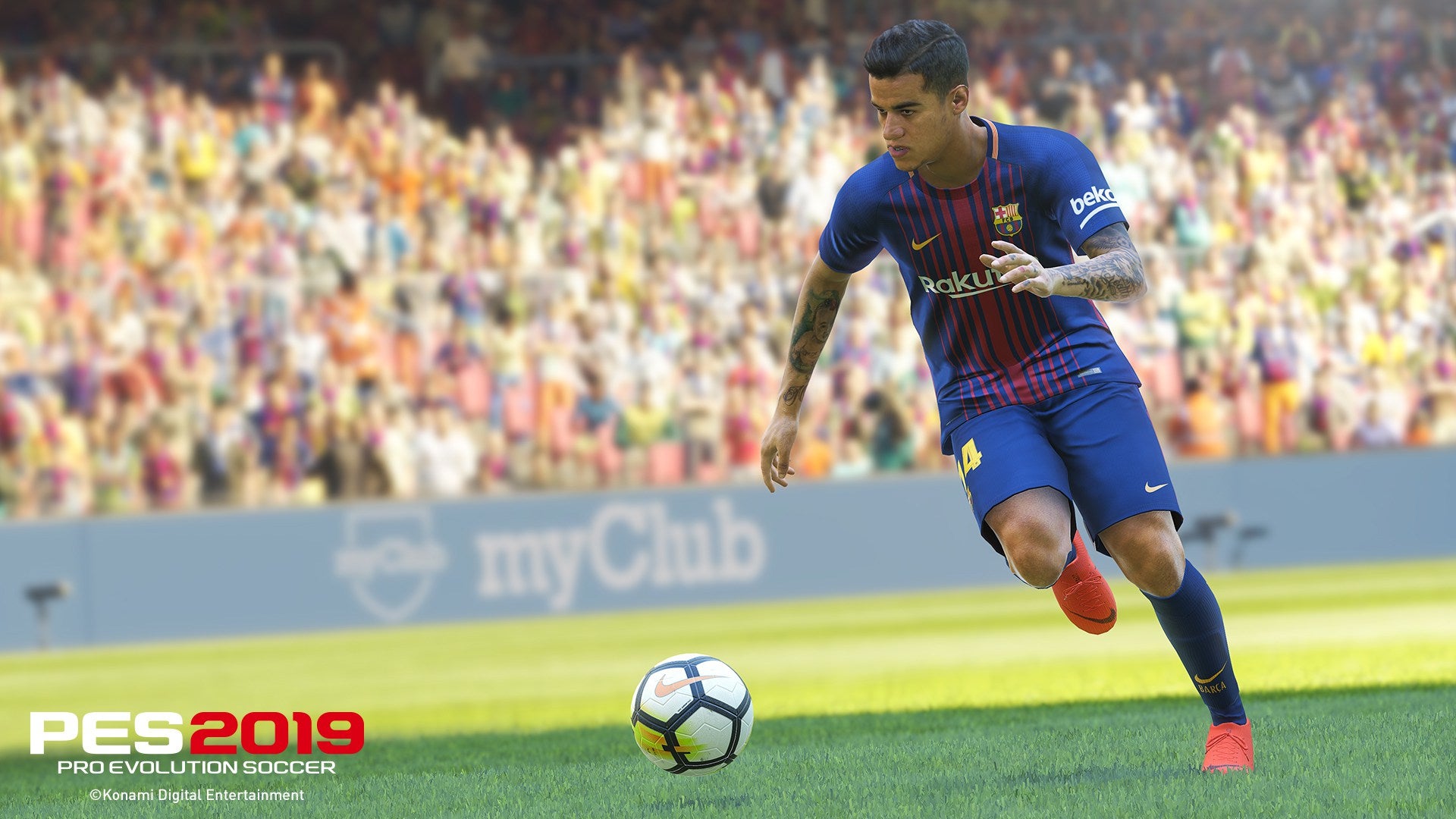 It’s the subtleties that make PES 2019 so fantastic to play: the eerily accurate animations when Coutinho brings the balls down from a lofted cross-field pass with his thigh or the way defenders fall away as the as Messi’s dancing feet stroll past them. The animations in this game are simply stunning, and I just can’t see FIFA 19 matching it.

Better animations lead to better, more realistic gameplay. PES lacks the gloss in pretty much every area when compared to FIFA, but that nearly completely fades away when you’re in a match. Passing is notably better than in previous games, as is the movement of your own team.

There’s very little that’s quite as satisfying as stringing together a passing move from defence to attack and it feeling like the AI is smart enough to move the rest of your team exactly where you want them to go.

This is far from easy though, and you’ll have plenty of misplaced passes that roll ineffectively out of play before things start to come together. The satisfaction of carrying out a move that ends in a lovely finish is so much richer in PES, as it doesn’t feel it’s doing everything for you – a problem I constantly have with FIFA. 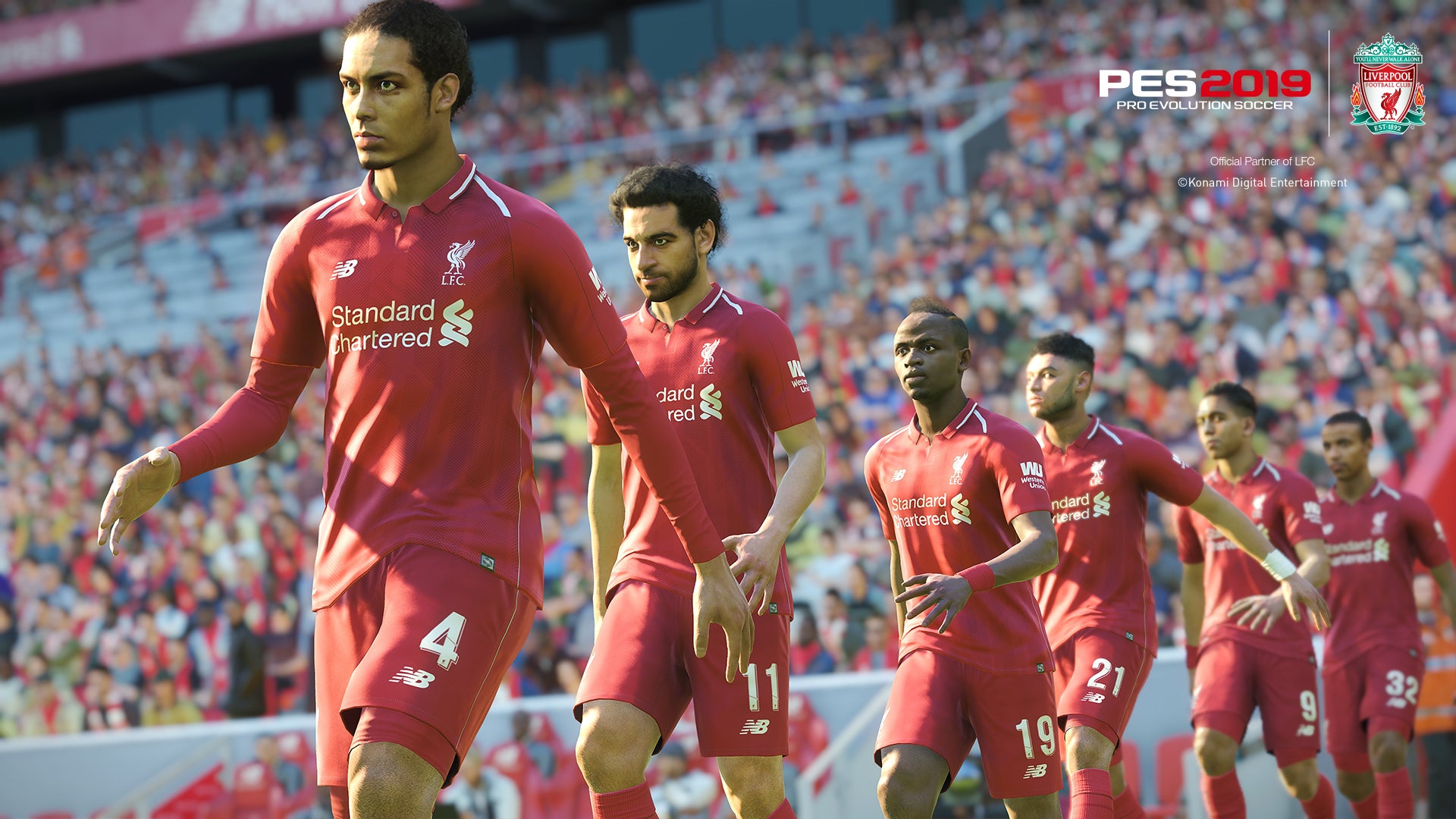 Along with passing, jostling and winning the ball feels a lot more realistic this time around. Differences between players strength is far more noticeable, but you’ll also see how technically gifted players can wriggle through slower defenders by keeping the ball close. You can shrug off the opposition if you’re good enough and you can even get the ball back if it initially feels like you’ve lost control. Again, this might seem a small change on paper but it adds a lot to the realism.

Of course, while the reproduction of football is unmatched in PES 2019 there’s less to be said about other aspects of the game. It was a huge blow for the series when it lost the coveted UEFA Champions League and Europa League licenses earlier in the year and it’s only made worse by the fact that it seems to be the flagship feature for FIFA  19.

Losing the rights to that iconic tournament just makes it even more obvious how behind PES is in this area. Yes, there are more licensed teams here than before, but for the vast majority I don’t think that will make up for what’s been lost.

The teams that are licensed are reproduced beautifully, with authentic celebrations and kits. Both Arsenal’s Emirates Stadium and Liverpool’s Anfield look absolutely stunning, as do all the players in both teams. I must have watched a replay of Aubameyang scoring a clipped finish at least ten times as I tried to work out just how he was animated so realistically. There’s also licenses for the majority of Italian Series A teams (apart from Juventus), lots of French, Dutch and Belgian clubs, the Scottish Premier League and other teams of note like Barcelona and Schalke. 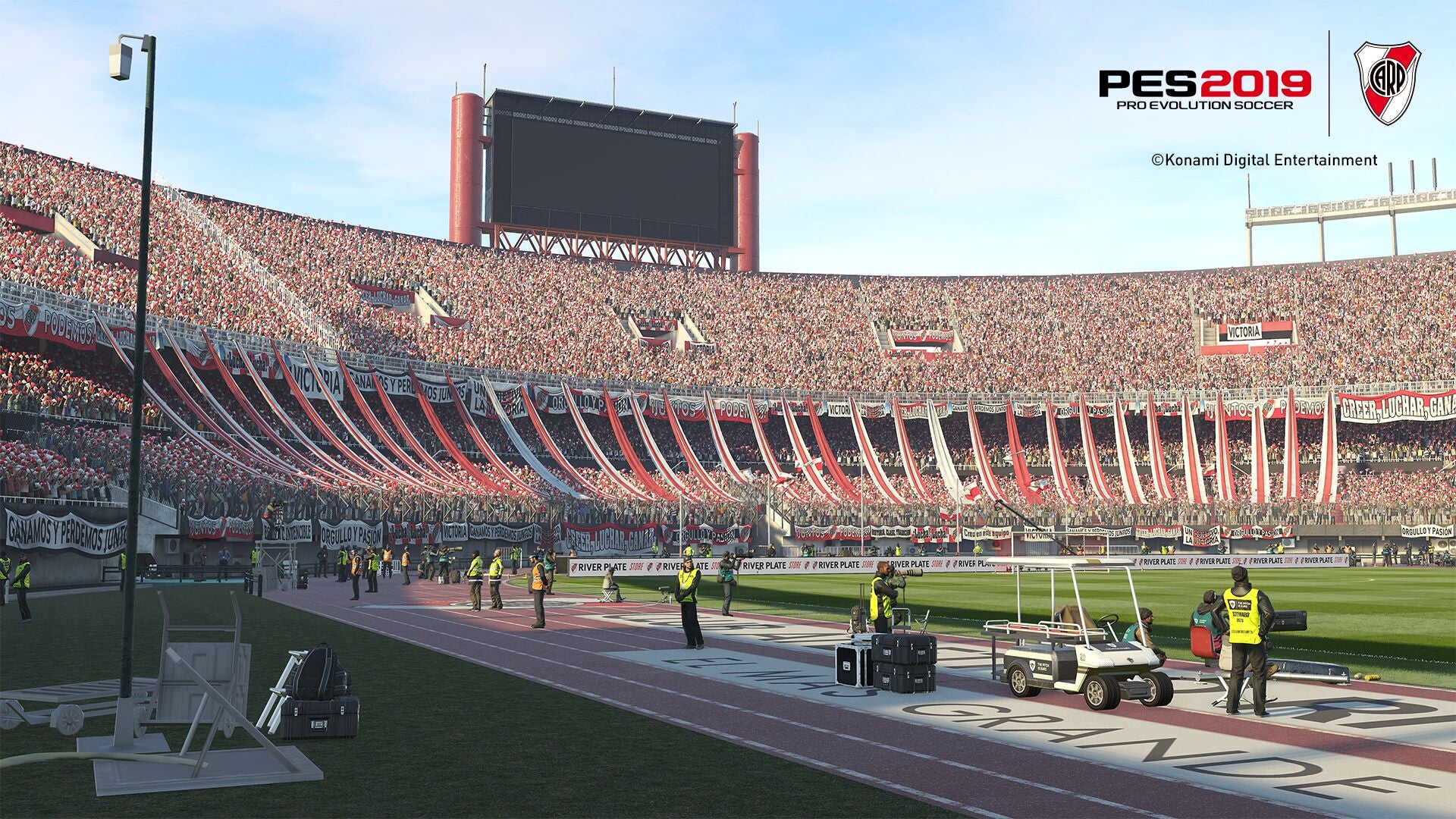 Play with a team lacking the correct rights and the experience loses it shine, though. Premier League club names are once again replaced with vague geographical descriptions (East Midlands = Leicester City) and during a Master League (the game’s main offline single-player focus) campaign teams put out often wildly different squads to what they’d ever field in real-life.

Another area PES 2019 misses the mark is in game modes. Again, if you’re a Pro Evo die-hard then this likely won’t alter your opinion on the game but for newcomers it does make a big difference. Master League is still the big drawer when you’re not online and it’s got some real depth, giving you plenty to do and the ability to make a big difference to players developments.

However, it lacks authenticity in transfer fees (I signed Wilf Zaha for 16 million, when he’s valued more towards 60 million in real-life) and the transfer market in general. Outside of Master League there isn’t much for offline gamer, with a couple of exhibition and tournament modes all that’s here.

Head online and there’s MyClub, which now includes co-op play and weekly boosts for players who perform well in leagues around the world. Very little has been updated here and it lacks the depth of Fifa’s Ultimate Team. 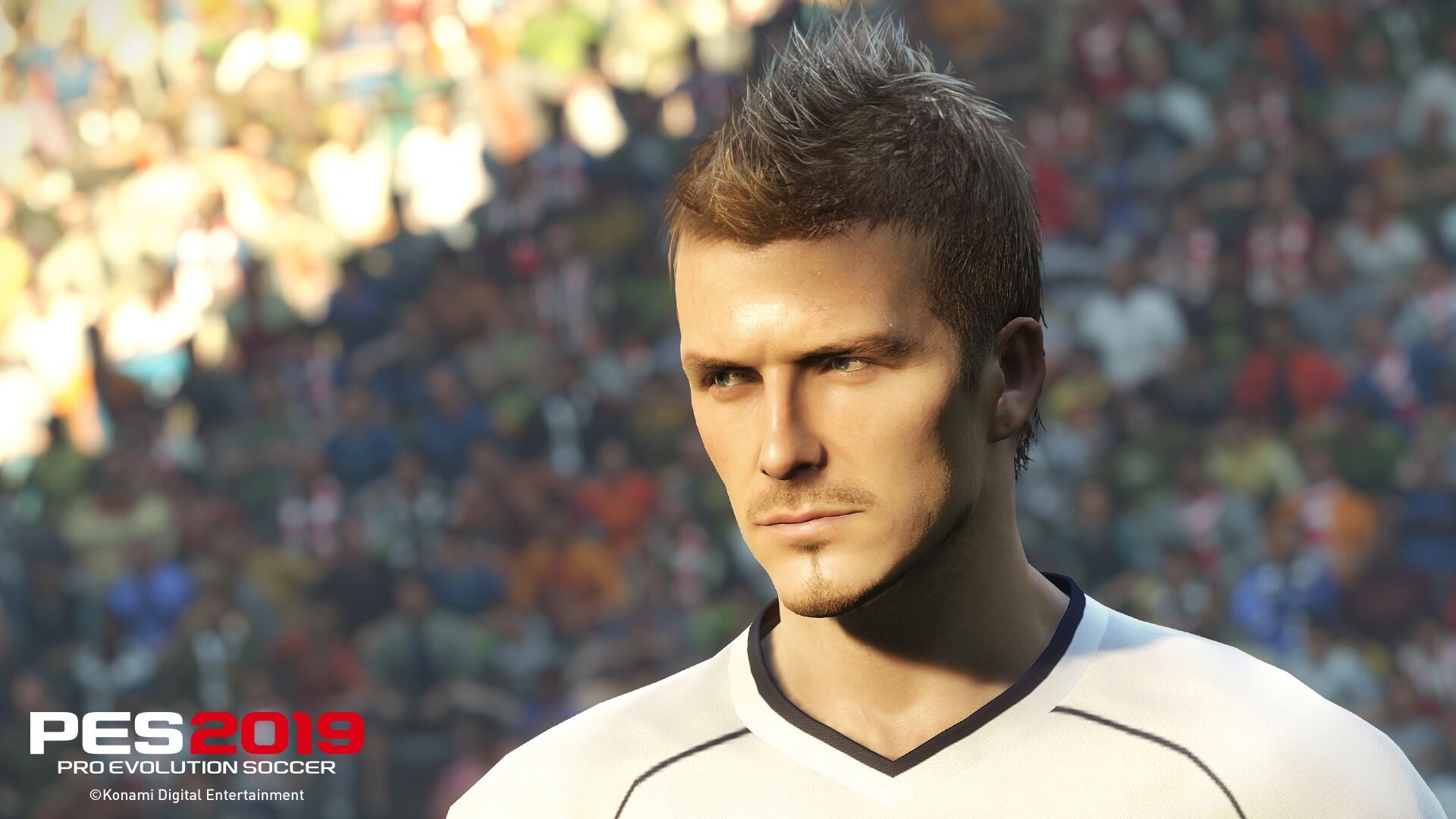 For many, me included, a football sim is more about how the games feels to play rather than how good it looks. Still, this is a gorgeous game and if you’re playing it on a PS4 Pro (or Xbox One X, though I haven’t tested this) with HDR enabled then you’re in for a treat. HDR amps up the lighting to the next level, bathing pitches in floodlights or shadows and giving the extra hit of realism. There’s terrific detail in here too: stitching in kits, blades of grass and a wide-range of facial expressions all look fantastic.

Pro Evolution Soccer remains the best, most accurate representation of football you can play without suddenly realising you can play out from the back like Harry Maguire.

It’s full of lovely touches that make it joy to get sucked into and try to master. But the same issues are still here: It lacks the in game variety of FIFA and now it misses out on all the benefits that came with the UEFA license.

Still, everything that’s missing just becomes background noise when you actually get on the pitch and start playing.