For those unfamiliar with the series, Persona 5 is intimidating. Even the title isn’t the most evocative for casual gamers. You can take shots at it all you want, but there’s a reason Call Of Duty has been named as such – you have some idea of what you’re in for before you even begin.

This being the fifth entry in the long-running series doesn’t help either, because straight away you may assume you’re already way behind. If you haven’t played the first four, how on earth are you ever going to understand this one? Thankfully, developer Atlus has taken all of this into account and seems to trust that gamers will carry the message forward. Which is exactly the case here.

One of the biggest positives with this latest release in the franchise is that it’s completely standalone. This has been the case with Persona in general, but it’s genuinely refreshing to buy into the hype and not be instantly punished. It may mean you’re less familiar with its broader approach and mechanics, but the characters and narrative are all new.

Set in Tokyo, you step into the shoes of a young boy who’s starting at a new school after falling into trouble with the law. The problems begin as you start to settle in. Continuing with themes from previous entries, it soon transpires you have the ability to explore a bizarre alternate reality where nothing makes sense. Essentially formed of lengthy dungeons – or ‘palaces’ in this instance – you have to try to overcome, you don’t do any of this alone. 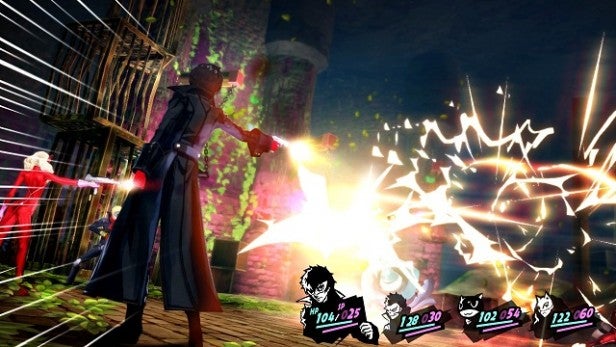 As well as your good self, Persona throws some friends into the mix. There’s Morgana, a talking cat; Anna – a young girl who is, in short, a mess; and Ryuki, an athlete and punk rocker. Deliberately strange, the cast of characters only gets better as the game progresses. Before the end of the game you’ll have built up a relationship with them, both as your digital and real self.

This isn’t the real joy of Atlus’ JRPG, however. Oddly enough, that comes in what you do during the day. Night-time is reserved for crawling through these threatening locations, but when the sun is up, you have to go to school. That means working a part-time job, taking tests and choosing who to hang out with. It’s playground politics all over again, and yet somehow it’s utterly riveting, especially because of how it’s all been implemented.

Taking on an almost simulation-like vibe, you have only so much time at your disposal to partake in activities; it’s important to figure out what will help and what won’t and take the appropriate action. For example, if you want to ensure your evening dungeon runs are more productive, you should read a book to increase your stats, or even build a weapon to use later on. The balance between the two is fantastic, and the more you understand it, the better it gets. 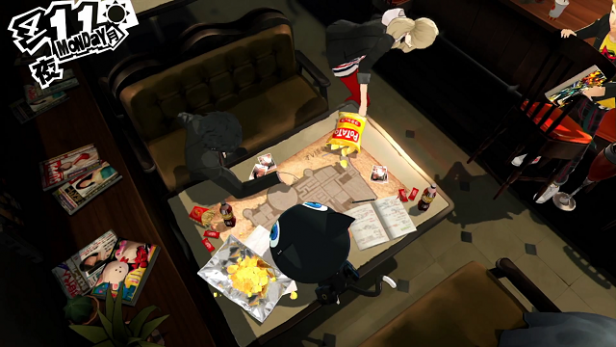 If this sounds like it’s veering too far away from the JRPG landscape, though, there’s no need to fear. When the moon rises, events are far more straightforward – or, as straightforward as you can expect from Persona 5. Skewing each dungeon so that it replicates somewhere you’ve been in the real world, each one almost feels like a dream, or an extension of what you’ve been used to. This makes it feel simultaneously familiar and different, and that contrast does a great job of hooking you in from the off.

From here it’s business as usual. Atlus has stayed true to the turn-based system that’s been so well received in the past. Although it make take a while to adjust if you’re new, combat soon becomes commonplace and has the depth and challenge required to ensure it stays interesting from start to finish. And it’s helped hugely by the addition of stealth.

Persona 5 will never rival Hitman in the sneaking stakes, but it certainly does add a needed twist to each battle. While you can just run in like a loon and thwack an enemy on the head, you’re much better off taking cover before sneaking up unawares. Doing so gives you the upper hand at the start of a fight, and also makes sure you’re not just falling into the same pattern over and over again. There’s choice here, and that choice is wonderful when the play clock ticks past the 20-hour mark.

Naturally, there’s a risk to all of this. Should you fail in your attempts to remain hidden, an in-game threat meter will increase. Successfully do away with a foe and this will be reduced, but continually making mistakes will fill it entirely and your time in the dungeon will end, forcing you back to reality. 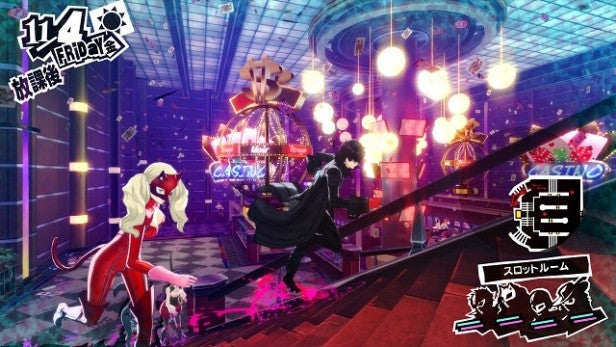 It’s a great way to introduce atmosphere to each skirmish, and most scraps do play out in a particularly entertaining manner. Persona 5 is keen for you to uncover your enemies’ weak points and exploit them, constantly rewarding you with extra advantages if you manage to keep this up for a prolonged period. It asks you to use your brain, and in doing so stops you from ever feeling tired or bored. You have to be switched on at all times.

Throw in a ton of extras – such as bonus dungeons – and the fact it looks great, and Persona 5 could very well be one of the best JRPGs in some time. The game won’t be for everyone, and if you’re not entirely enamoured with the concept then it will start to wear thin very quickly. Most people, however, are in for a genuine treat.

Persona 5 is one of the best JRPGs in recent memory, overflowing with originality, entertainment and straight up weirdness. It’s pretty damn good.