The single most significant fact about Panasonic’s debut 4K UHD TV, the L65WT600, is that it’s the very first 4K TV to sport an HDMI 2.0 input. This means it’s the first 4K UHD TV able to take 4K sources at 50 and 60Hz without colour compromise rather than the 30fps maximum currently possible through the HDMI 1.4 ports found on all the other 4K TVs in town. The competition is fierce, however, so the Panasonic L65WT600 has a lot of work to do to match the very best 4K TVs. 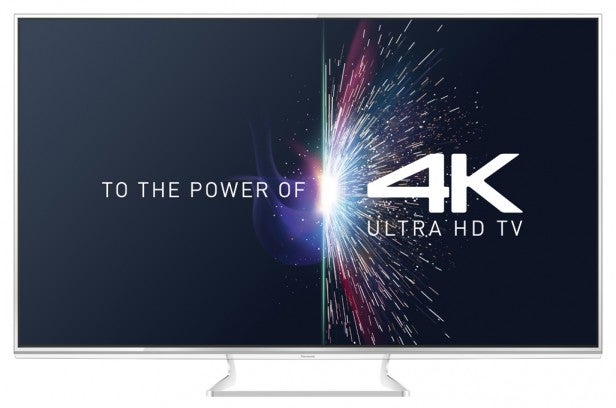 Panasonic has delivered some of the prettiest TVs around this year, and happily the flagship L65WT600 continues the theme. Its metallic bezel is exceptionally thin, and is offset tastefully by a black inner frame that disappears when the TV is turned off, so that you only see the tiny outer frame.

A cute see-through, illuminated strip hanging off the bottom edge, moreover, leads your eye down to a gorgeous glass and metal stand. It looks every bit the high-end TV that it is.

A count of the L65WT600’s connections reveals a couple of significant surprises. First there are four HDMIs where Panasonic has – weirdly – only stuck three on its other TVs this year.  One of these HDMIs uses silicon specially developed by Panasonic to deliver a full HDMI 2.0 specification, enabling it to take in 4K video at 50/60Hz rather than the 30fps limit of current HDMI 1.4 ports. Or to be more precise, since they can handle much bigger data streams than HDMI 1.4 ports the HDMI 2.0 input on the L65WT600 enables the set to receive 4K at 50/60Hz while retaining full 4:4:4 colour subsampling.

Most of the other current 4K TVs are all promising updates that will enable their HDMI 1.4 ports to receive 4K at 50/60Hz, but these updates will only work with reduced chroma sub-sampling – for example, 4:2:0 rather than the full 4:4:4.

Some claim you’ll struggle to see the results of this reduction in colour information under normal viewing conditions, but we’ve seen a reasonably convincing demo from Panasonic that suggested otherwise. And when you’re dealing with images as precise as 4K ones, it seems only logical that you’ll want the precision to spread into as many areas of the picture as possible. Why compromise when you’re spending £5,500 on a TV?

We should add here that Samsung’s current UHD TVs use external connection boxes that could potentially be replaced by new ones equipped with true HDMI 2.0 inputs. But for all the rest of the current 4K UHD generation bar this Panasonic, a level of native 4K signal compromise is going to be inevitable with their current HDMI connections.

The other connection surprise – you might remember we said there were two before getting sidetracked by the joys of colour subsampling – is the appearance of a DisplayPort. While these are staples of the computer world, they’ve never cropped up on TVs before. So why now? Because DisplayPort connections across the board also accept full colour resolution 4K 50/60Hz feeds, with no compromise.

It’s unlikely that the wish expressed by one Panasonic speaker at a recent L65WT600 launch event for DisplayPort to usurp HDMI as the new standard TV connection will come to pass. But DisplayPort’s advantages in the 4K area at least highlight the rather botched situation we’ve currently got with HDMI. Certainly it’s hard not to imagine that we’ll get another less fudged HDMI standard in another couple of years once 4K has developed a bit more.

Shifting to sockets not associated with the L65WT600’s 4K UHD capabilities, the highlights are three USBs for playback of video, photo and music multimedia files, and both LAN and built-in Wi-Fi network options. 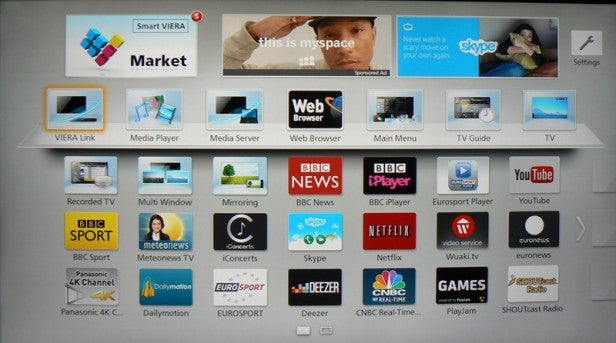 The My Home Screen interface Panasonic provides for accessing the L65WT600’s numerous content sources is outstanding, making tracking down things you want to watch exceptionally easy. You can even easily set up personalised portal screens for different members of your family.

Also impressive is the Panasonic Viera Remote app for iOS and Android devices. This provides an impressive amount of intuitive functionality, including being able to stream tuner sources from the TV to your smartphones and tablets for viewing in other rooms.

In an ideal world Panasonic would have got a few more video streaming services on its smart platform, but there is one extra service of serious note compared to the service you get with Panasonic’s non-4K TVs: a 4K content channel. This is mostly filled with Panasonic-shot material; there are no blockbuster movies. For now, at any rate.

Unfortunately, our experience with the 4K online channel was ‘somewhat’ hampered by the fact that Panasonic recommends a broadband connection of around 50Mb/s for the service to work well. And our test room enjoys a national average connection speed of just 6Mb/s. And there, in a nutshell, is just one of the problems facing 4K distribution right now…

Delving into the L65WT600’s set up menus, there are an awful lot of calibration aids for enthusiasts – or, potentially at this level of the market, professional installers. Among the most significant of these are a full colour management system, extensive white balance and gamma controls, and plenty of control over the TV’s many processing options.

So extensive are the L65WT600’s controls, in fact, that the set is endorsed by the independent Imaging Science Foundation (ISF), with day and night picture preset slots where you can store your professionally calibrated settings.

There are also two other eye-catching third party presets: THX Bright Room and THX Cinema. These are there, of course, because the L65WT600 has been certified by the independent THX group as attaining a performance standard with 2D and 3D material that meets THX’s quality criteria. This is unusual to find on an LCD TV (though it’s quite common in the plasma world). 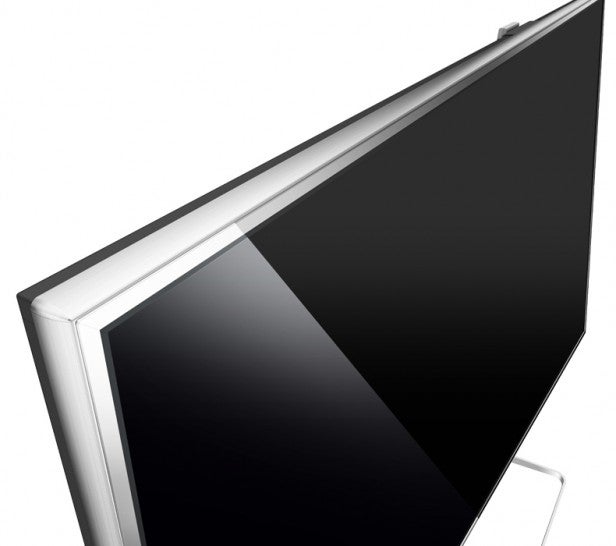 As you’d expect, the L65WT600 supports 3D playback. Rather less expected, though, is the L65WT600’s use of an active 3D system rather than a passive one, given that all of Panasonic’s other LCD TVs this year have gone the passive route.

One last significant feature of the TV to mention is its 2000Hz BLS panel driving system, where BLS stands for the back light scanning system that plays a part in the 2000Hz claims (the panel’s native refresh rate is actually only 100Hz).

Thanks to its comprehensive and straightforward onscreen installation instructions when you first turn it on, the L65WT600 is one of the easiest TVs around to set up. Establishing your own personalised content hub – something we strongly suggest you take the time to do – is also brilliantly straightforward.

Things are a bit more complicated when it comes to picture setup, though.

If you’re a fairly serious film fan, we guess you might want to use either the THX Bright Room or THX Cinema presets as your set up starting point. However – and this is a pretty big however – while these settings deliver very accurate colour settings, we personally didn’t find them the best option when watching upscaled HD or standard def footage. Probably because their default position is to turn off as much image processing as possible, when a touch of extra processing help can actually be useful given the huge challenges involved in converting HD and standard def sources to 4K.

With the upscaled HD viewing that will make up the vast majority of your viewing in the short term, we personally would recommend at the very least using the Resolution Remaster option on Auto, along with the Adaptive Contrast feature set to medium (for reasons we’ll get into in the Picture Quality section). Though you shouldn’t need the MPEG NR so long as your HD feed is of half-decent quality.

The THX presets are more effective for native 4K UHD content, though, where turning off most of the processing options – aside from the Adaptive Contrast one – is the cleanest option.

One last setting to mention when it comes to the L65WT600’s scaling of HD and standard definition is the set’s interesting Pixel By 4Pixels mode. The idea with this is that rather than using Panasonic’s powerful Hexa Processing engine to calculate the best appearance of the extra pixels required to turn HD and standard def into 4K UHD, it simply produces four copies of each pixel to deliver a 1080p-emulating image that contains no ‘invented’ picture information.

Catering for image purists in this way is a thoughtful touch, even if from our 4K-loving point of view the lure of a ‘proper’ 4K image is very strong, even when many of the pixels in the image are computer-generated.