From what we saw on the floor of January’s Consumer
Electronic Show, 2013 is shaping up to be the year where Smart TV
really comes of age.

Not surprisingly the usual Smart TV ‘kingpins’ –
LG, Samsung and Sony – are going to be playing a big part in advancing
the Smart battleground. However, also bursting onto the Smart TV scene
in a much more aggressive way than it ever has before is Panasonic.

The
Japanese brand’s Viera Connect online TV service has always been a
solid effort, especially where the stability of online and multimedia
handling is concerned. But it’s also always looked rather old fashioned,
and hasn’t excelled at handling the growing quantities of content Smart
TV engines are now starting to deliver.

Which is where
Panasonic’s new ‘My Home Screen’ concept comes in. As we’ll see, this is
a radical rethink of Panasonic’s Smart TV interface that’s designed
expressly to put ease of use and ease of content access to the fore,
enabling users to immediately engage fully with everything the latest
Smart features have to offer. 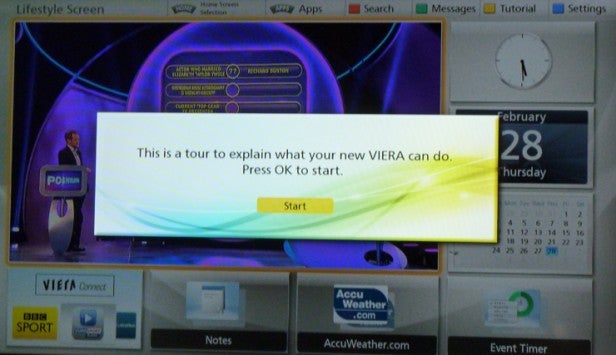 The
sense that Panasonic has taken its Smart TV functionality to a much
higher level than before kicks in almost straight away, as the opening
set-up menus include some helpful new high-definition illustrations that
immediately create a much more modern impression than Panasonic TVs
have delivered before.

The only slight flaw at this early stage
is that there’s a flagrant typo in the first page of the set-up menus
that renders the last sentence nonsensical. Actually, a few parts of the
set-up menus are badly written, which undermines the professional tone
established by the high presentational values.

Despite the
grammatical flaws, however, the latest Panasonic set-up system proves
exceptionally easy to follow – at least when it comes to getting the
fundamental basics (including Wi-Fi) working.

Once
the auto-tuning part of initial setup is done, you’re rather scarily
introduced to a robotic lady’s voice inviting you to take a tour of the
new Viera multimedia systems and interfaces. This is a weird moment, for
on the one hand it feels futuristic to hear a woman speaking to you,
yet on the other the robotic tones sound a bit 1980s… Ultimately, the
monotone drone of the voice proves more distracting than useful, so it’s
just as well all the words being spoken are written on screen too. 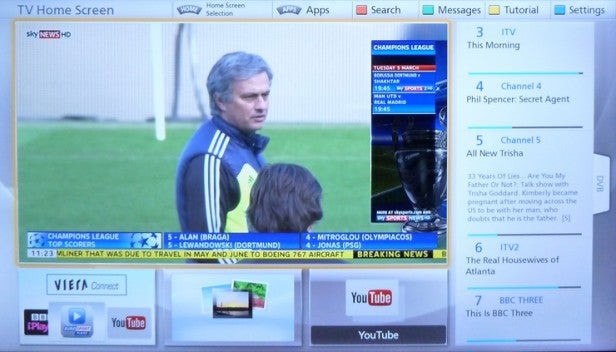 As
the robotic voice explains, My Home Screen is essentially a
graphics-rich interface that’s designed to sit between you and all the
available content – TV broadcasts, AV inputs, online sources, networked
PCs, USB/SD multimedia devices – in order to make finding what you want
easier.

It works by providing you with three preset and themed
(‘TV, ‘Info’ and ‘Lifestyle’) home screens to get started with, although you are also free to create extra home screens of your own to suit the
content preferences of multiple users in your household.

This is a pretty big step on from the sort of TV operating systems most people will be used to seeing. So it’s great that Panasonic makes you sit through its brief but effective (despite robot lady’s slumber-inducing voice) interface tutorial before you start using the TV for real.

Once the tutorial is over, you get the option to choose which of Panasonic’s three home screen presets you want to establish as your default – the one the TV goes straight to whenever you fire the screen up. 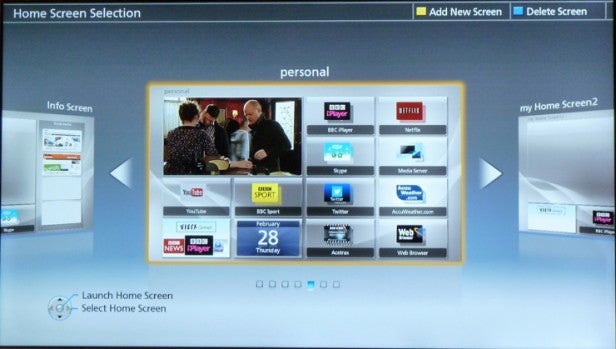 Before we look at each of these prefabricated Home Screens in more detail, it’s pleasing to note how all of them manage to retain a selection of useful content/menu shortcuts running along the top of the screen with one-click access to: Home, Apps, Search, Messages, Tutorial and Settings. These are written shortcuts too, not just icons, so there’s no confusing what they mean. We’re also impressed by how each text shortcut has a corresponding button on the impressively designed remote, with each button being clearly drawn in the top on-screen bar. This sort of visual aid is really helpful, especially in the initial stages of using the TV.

Turning now to the set-up of each Home Screen, let’s start with the TV one. Not surprisingly this is dominated by a large window showing the TV picture, with a scrollable bar down the right showing nicely presented Electronic Program Guide (EPG) information for what’s currently showing on all the tuner channels available on your tuner.

A small box to bottom left, meanwhile, provides a portal to Panasonic’s Viera Connect online app centre. More on this in a bit. The middle box at the bottom of the TV home screen allows you to select photos stored on a connected DLNA device, while the final window on this screen lets you quickly leap off to YouTube.