With the US seemingly less important to Panasonic than Europe these days, the brand didn’t have nearly as many AV products on show at this year’s CES as we expect to see at the brand’s European convention in February. The 65DX900 TV and UB900 Ultra HD Blu-ray player it was showing, though, certainly still made an impact.

The 65-inch TX-65DX900 TV we’re looking at here (we’ll be covering the UB900 in a separate article soon) has a number of eye-catching tricks up its sleeve. For starters, it’s likely to be the first Ultra HD Premium TV to go on sale in Europe. It’s currently scheduled to arrive at the end of January/Early February, at least a couple of weeks before Samsung’s first models of 2016 roll into town.

If you don’t know what we mean by Ultra HD Premium, read our Ultra HD Premium Guide for more on that. But briefly speaking the Ultra HD Premium ‘badge’ means the 65DX900 delivers all the resolution, brightness, contrast and colour response specifications necessary to produce a high grade of 4K HDR playback.

Its Ultra HD Premium badge is joined by a THX one too, providing another layer of independent third party ‘endorsement’ for people scared to take the plunge into the brave new world of 4K and HDR TVs. 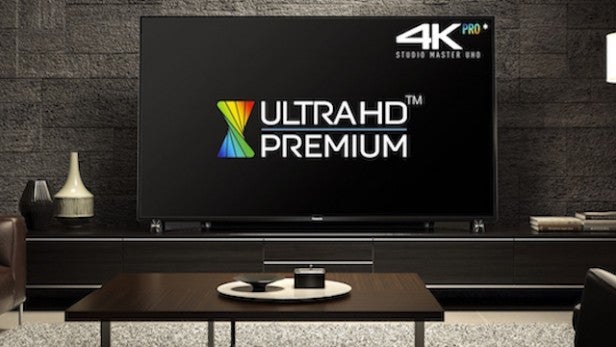 The 65DX900 also intriguingly uses a new ‘honeycomb’ backlight structure. This divides the direct backlight (where the LEDs are positioned directly behind the screen) into hundreds of individually controllable zones, and also puts pretty rigid dividing structures between each zone to limit light leakage.

The advantage of this, of course, is that it enables the 65DX900 to deliver much more local light controls, hopefully resulting in a much more plasma or even OLED-like contrast performance than you usually get with LCD screens.

The honeycomb backlight is driven by a new HCX+ chipset that supercedes the already powerful 4K Pro one used on last year’s high-end Panasonic TVs. This chipset also introduces an apparently more sophisticated algorithm for getting the best from the advanced 3D Look Up Table colour system Panasonic introduced last year.

The panel inside the 65DX900 also uses wide colour gamut phosphors to reproduce well over 90 per cent of the Digital Cinema Initiative colour space (another key component of a good HDR experience) as well as luminance peaks up to the 1000 nits required by the Ultra HD Premium specification.

What’s more, Panasonic claims that its backlight design and processing enables it to deliver peak brightness across much more of the screen at once than other manufacturers can. Most LCD TVs have to dim the image elsewhere in order to deliver relatively small areas of bright peaking.

For the vast majority of a fairly extensive hands on in a pleasingly dark room away from the CES floor, the 65DX900 looks spectacularly good. For starters its black level response really is special for LCD technology – not quite as profound as that of Panasonic’s 65CZ952 OLED TV, but certainly blacker than we’d perhaps ever imagined LCD might get.

Even better, because of the unusually localised lighting the honeycomb panel design delivers, the 65DX900 is able to combine its ground-breaking black levels with HDR-friendly punchy whites and colour saturations in the same frame. Even the best direct LED LCD TVs we’ve seen before haven’t been able to match the 65DX900’s mixture of both intensity and black level depth. 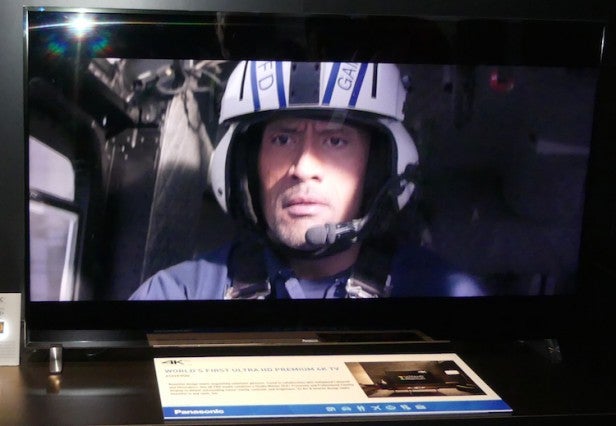 The point about the 65DX900 being able to push high brightness simultaneously across more of its screen than usual seems borne out during the demo too, as it manages to make every part of one of Mad Max: Fury Road’s almost uniformly bright, busy car fight sequences look punchy and HDR; it’s not just the flaming exhausts and explosions that clearly go beyond SDR.

That’s not to say that peak image elements don’t still look like peaks; they do. But they peak against a higher average light level to deliver what feels like a more consistent and accurate HDR experience. Very impressive – especially as the higher overall brightness is delivered without compromising those exceptionally inky blacks we mentioned.

Colours look nothing short of phenomenal, meanwhile. Everything from the often powdered and scarred skin tones of Mad Max to the riotously beautiful richness of The Lego Movie’s colourscape is rendered with a joyous combination of punch and absolute naturalism (so far as a Lego world can ever be considered natural), and at a much higher level of intensity than you get with standard dynamic range sources.

The 65DX900’s extreme contrast and colour range joins forces with its native 4K resolution to ensure that pictures look so solid and full of depth that they almost feel like 3D, drawing you into the onscreen action in a way non-HDR images just can’t.

There’s really only one area of concern we have with the 65DX900’s images, and that’s the appearance of light blooming around really bright image elements if they’re appearing against almost black backdrops.

Obviously such extreme image juxtapositions aren’t all that common during normal viewing, and the honeycomb design certainly limits how far the haloing extends. It may also prove possible to calibrate the issue almost into insignificance once we get a 65DX900 of our own to play with.

But for now, while we didn’t see any obvious haloing during the Mad Max and Lego Movie clips, a demo reel of some fireworks did reveal evidence of haloing – especially if we moved our viewing position to more than 25 degrees off axis.

Overall, though, the 65DX900 gets so many things spectacularly right that it joins LG’s Signature OLEDs on the list of TVs we’re most excited to get into our test rooms once the CES madness has died down.