Every major TV brand at this year’s CES has had a super-slim set tucked away somewhere on its stand. Thin is very much still in, it seems.

The sad fact for most of the TV brands at CES, however, is that none of them do thin quite as spectacularly and stylishly as the LG G6 “Signature” OLED series.

LG has developed a whole series of flagship, design-led Signature products this year, but hands-down the most glamorous of these has to be the G6 OLEDs.
These TVs miraculously deliver 65- and 75-inches of picture from a flat-screen chassis that’s only 2.57mm deep.

What’s more, the majority of that depth is made up of a translucent glass backplate, creating the impression that the pictures are somehow being made by the glass. LG imaginatively calls this effect “Pictures on Glass”… 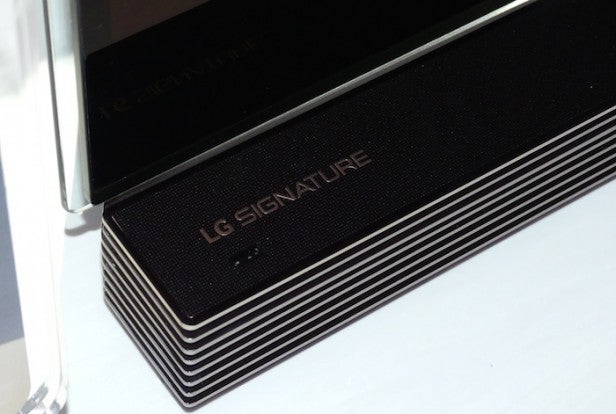 The incredible thinness of the Signature OLED screens is further enhanced by the glass plate extending slightly beyond the super-slim black frame that sits directly around the screen.

Hanging from the bottom edge of the 65G6 Signature OLED TV is a built-in, forward-facing sound bar with a 4.2 stereo speaker configuration. What’s more, the desktop stand to which this speaker attaches can pivot round to form a slim but strong wall mount for the 65G6.

At this point the speakers that are mounted into the top edge of the soundbar when using the TV in a table-top configuration become forward-facing speakers for the wall-mounted setup.

This is seriously stuff clever – and something of an engineering marvel considering that the pivoting mechanism for the stand/wall mount system is built into a screen that’s less than 3mm thick.

There’s no doubt that the G6’s design is amazing then, but it’s actually the TV’s picture performance that made the biggest impact during a fairly extensive CES hands-on with the 65-inch model.

One thing that was obvious from the get-go was how much brighter the 65G6’s pictures looked than those of any previous OLED TV I’ve seen. This is a result of LG using new phosphors that enable it to boost brightness up to the minimum 540-nit peaks demanded by the Ultra HD Premium standard announced at CES by inter-industry working group, the UHDA.

LG claims a brightness increase in the order of 20%, but in truth it feels slightly more than that. I suspect this is a result of the incredible black levels achievable with OLED technology, which seem to exaggerate the impact of any bright image elements they appear against. 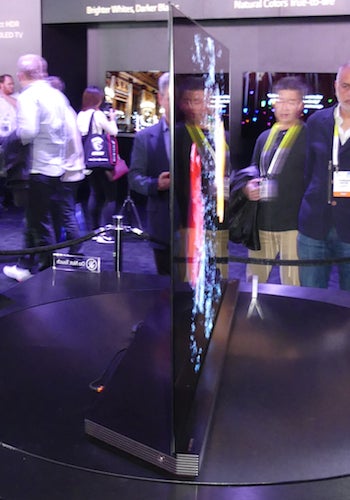 Actually, it’s great to see that the introduction of extra brightness hasn’t had a negative effect on the 65G6’s black levels. If anything, they look even more dramatic now that they have greater brightness to bounce off.

Almost as instantly striking as the extra brightness is the extra colour LG has eked out of its new generation of OLEDs. Again motivated by a desire to meet the new requirements of the HDR era, the 65G6 can apparently reproduce a huge 99% of the Digital Cinema Initiative’s colour range. This is comfortably above the 90% specified by the Ultra HD Premium recommendations.

Rich reds, greens and even blues, which are traditionally an OLED weakness, look sensationally rich and dynamic with the mix of Amazon 4K HDR and NASA 4K streams available in the demo room – but not in a gaudy, cartoonish way. Instead the combination of the 65G6’s native 4K UHD resolution and impressive 10-bit colour handling leads to colours that look beautifully subtle and expressive – even in dark areas.

It appeared to me that there’s markedly more shadow detail in the darkest areas than delivered by LG’s 2015 OLED TVs – a talent that’s especially evident with HDR content. In fact, pretty much every aspect of the picture is slightly more aggressively rendered with an HDR source – in a good way – than was the case with 2015’s HDR-capable models.

Rival brands will claim that you need 1000 nits of brightness in order to display HDR properly, but feeding HDR to the 65G6 clearly reveals palpable advantages over SDR images that add up to a gorgeous finished whole.

You don’t just have to take my word for it either. During my hands-on with the 65G6, I was joined by folk from Dolby who were super-excited by LG’s support for Dolby Vision HDR format in its new OLED range of TVs.

During our time with the 65G6, LG claimed that it had substantially improved the vignetting issue that became apparent on its 2015 OLED screens. This did seem borne out by much more even lighting right across the screen when showing bright and medium bright content. However, note that the bright lights in the room in which this hands-on took place aren’t ideal for accurate image assessment. 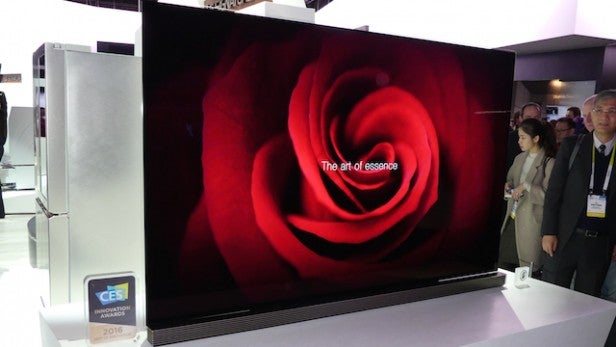 While there were a few (probably avoidable) motion artefacts to be seen and occasional moments of greyness at just above black areas of the picture, overall my impressions of the 65G6’s pictures during our demo were that they amplified all the colour, black level and mind-bending contrast strengths that are OLED’s trademark. In doing so, the 65G6 delivered a much truer HDR performance, alongside pictures that could be the stuff of nightmares for LCD.

So the 65G6’s amazing design and mostly equally amazing pictures are clearly the Signature’s stand-out features, but that innovative sound bar audio system is no slouch either. It delivers decent volume, clear voices and exceptional soundstage detail – without sounding forced or harsh.

There isn’t all that much bass – but come on; the fact that we’re talking about any sort of acceptable audio performance at all from such an insanely thin screen is pretty remarkable.

LG hasn’t yet revealed pricing information on the Signature series, which is due to launch in March/April. However, the company is certainly talking about it representing a pretty considerable investment – especially since LG is introducing no less than three other, more “mainstream” OLED models alongside the Signature G6es.

If the Signature OLED price is set high, it could create a value problem for the G6 models given that the picture technology in the 65G6 is also found in LG’s new, lower-end models. That said, the Signature models’ exclusive design is truly amazing. Combined with a mesmerising picture and surprisingly good sound quality, the Signature G6es are arguably the single most all-round impressive TVs that 2016 CES has to offer.