Love ‘em or hate ‘em, you simply can’t ignore ‘em. Curved TVs, that is. So it wasn’t entirely surprising to find Panasonic unveiling its debut curved TVs this week at its 2015 annual European product convention.

What was surprising, though, was the conviction with which the brand has dived into the curved TV world, unveiling three separate 4K UHD curved ranges. There’s the entry-level CR430s, the mid-range CR730s and the flagship CR850 series we’re locking our eyes onto here. 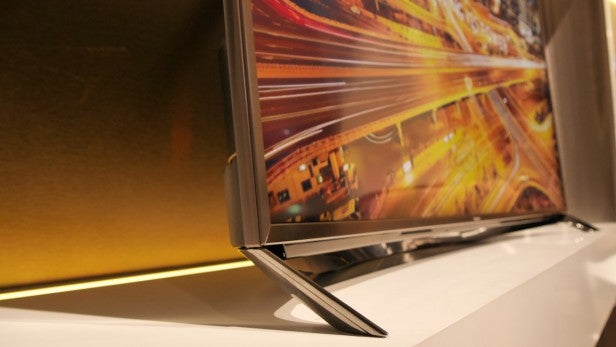 This last feature claims to enable the 65CR850, and its 55-inch sibling, to deliver a whopping 98% of the Digital Cinema Initiative (DCI) colour spectrum. This compares favourably, Panasonic gleefully informs us, with the 92% you get with Quantum Dot-based technologies.

SEE ALSO: What are Quantum Dots? 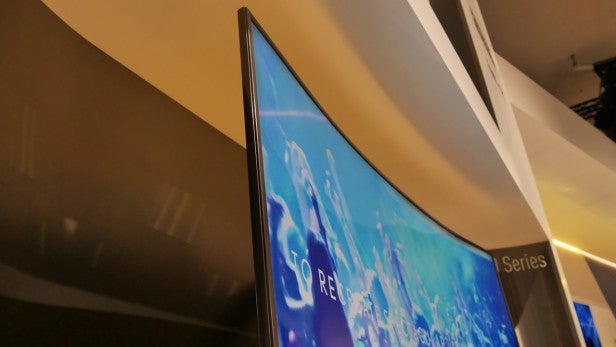 First impressions of the 65CR850 design are mostly positive. It wears its curves nicely thanks to its slender, shiny metallic bezel and the similarly curved stand arcing out behind it. The depth of the curve is quite pronounced – in line with Samsung’s approach, rather than the gentler, though arguably borderline ineffectual, curves preferred by Sony and LG.

Unlike Samsung, though, Panasonic offers pretty much exactly the same level of TV specification in a flat alternative, the CX800 series, meaning that picking between CX800 and CR850 is just a matter of personal taste. You don’t have to worry about sacrificing other technologies if you opt not to go with the curve.

In fact, Panasonic isn’t attempting in any way to suggest that using a curved screen makes for a better viewing experience; it’s just giving you an aesthetic option.

The 65R850 on show was tilted back slightly, which we’re not convinced is a positive move, given the potential this has to slightly accentuate curved TVs’ geometry issues. Also, the metallic bezel tended to reflect the lights of the convention centre’s floor – though it’s unlikely this little distraction would be as pronounced in a typical domestic situation.

Panasonic’s keenness to show off its new high brightness, wide colour phosphor and 4K Pro processing systems meant we were able to get an idea of how the CR850 performs in direct head-to-head viewing against a number of TVs from other brands. We weren’t able to verify the fairness of these comparisons by making sure the rival TVs were set up to their best advantage, but with that in mind there’s no denying that Panasonic’s flagship curved TV and its CX800 flat equivalent gave a mostly very impressive account of themselves. 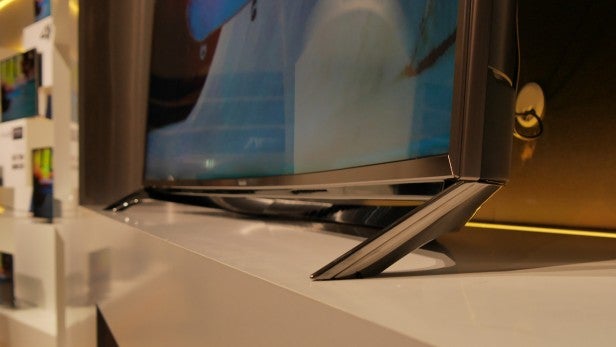 The first telling head-to-head pitted the 65CR850’s picture processing technology against one of 2014’s Sony TVs, the flagship 65X9005B, as well as a small reference OLED studio monitor. And the Panasonic model comfortably outgunned the 65X9005B – a set which, of course, tested very highly with us last year. Black levels were markedly deeper on the Panasonic set, colours were much warmer, bolder and overall more natural and nuanced, and there was a much more potent and dynamic sense of contrast in the Panasonic’s picture.

Panasonic’s new 4K Pro system also crucially helped its TV produce lovely subtle detailing, helped out by powerful 1600Hz-emulating motion processing. Even the tiniest gradation shifts were without a trace of noise or any sense that the sharpness was being forced or over-processed.

We’re not entirely sure it was a great idea to run the 65CR850 against the OLED studio monitor, as shifting between the OLED and the 65CR850 made it clear that the LCD TV was prone to some light bloom around very bright objects. But against the Sony 65X9005B the Panasonic did make a compelling case for itself. 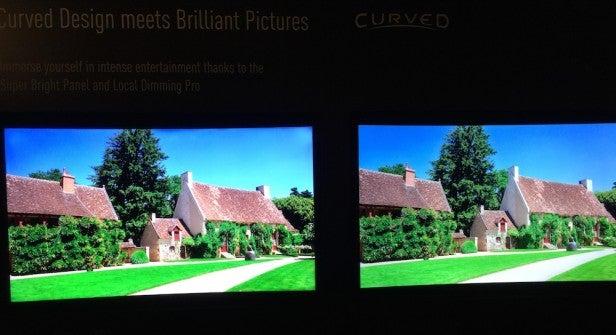 Panasonic was also in “humble the opposition” mode with a head-to-head against the 65CR850’s wide colour phosphor (4K Studio Master) panel running against a Quantum Dot TV – in this case the Sony 65X9005A from 2013. While a comparison with such an ageing screen may seem a bit unfair, it did underline the point that Quantum Dot technology isn’t actually new, and in fact is something Sony chose to abandon in 2014.

There’s no denying that the 65CR850’s wide colour LCD technology took Sony’s once-revered take on Quantum Dots to the cleaners. Tones on the Panasonic TV delivered a dizzying combination of ultra-vibrant, punchy saturation and gorgeous tonal subtlety, underpinned by a wider contrast range – yet at no time did the vibrancy of the Panasonic screen tip over into looking overblown or unnatural. On the contrary, it was the relative lack of richness and tonal range in the Sony screen that looked unnatural. Though it must be stressed again that we weren’t able to tinker with the Sony’s settings to check it was a truly fair face-off.

Alongside the colour-based head-to-head with a Sony 65X9005A, Panasonic was running a separate demo showing the TX-65CR850 against another rival curved screen. And it has to be said that while Panasonic was deliberately not pushing curved screens as a premium viewing experience, the extra colour richness, sharpness and contrast evident in the 65CR850 did seem to help images deliver an enhanced sense of depth versus both flat TVs and less dynamic curved TVs. Some shots across cities and of flowers hanging from a door frame seemed genuinely 3D at times, even though the footage was definitely only shot in 2D.

All this and we haven’t mentioned the 65CR850’s HDR capabilities yet. Panasonic was keen to demo this key new feature of its flagship curved debutante – though strangely it was perhaps the least convincing part of the 65CR850’s showing. The only HDR demo footage available was Netflix’s Marco Polo showreel, and while this certainly exhibited the sort of extra brightness, colour punch and enhanced shadow detail associated with HDR, the screen also seemed a little inconsistent in how it dealt with the varying intensity levels of the HDR, leading to a distracting experience overall.

However, we’re not inclined to worry too much about this yet, given that no HDR standard has been finalised. Nor, as far as we know, have deliberations with Netflix about the best way to deliver HDR been concluded. So there’s plenty of time and scope for Panasonic to tweak its firmware to do a more considered job with HDR ahead of launch. 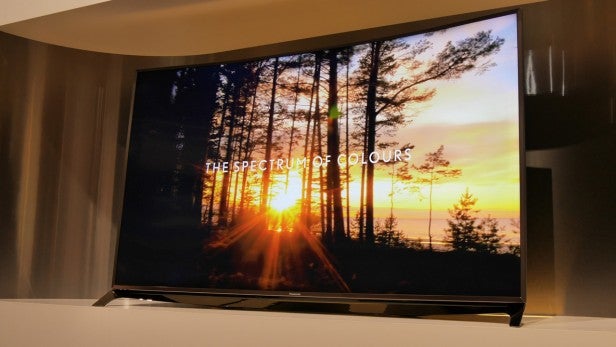 While we were mostly impressed by how the Panasonic TX-65CR850 is shaping up so far, the single most eye-catching thing about it is its price: it seems likely that the 65-inch model will go for somewhere in the region of £3700. The looks very attractive indeed when considered against the £6,000 currently being asked for the Samsung UE65JS9500 HDR TV.