Everything you need to know about… Quantum Dots

Quantum dots. Sound cool, don’t they? But for once this is a technology that’s actually as good as it sounds. Quantum dots, among other things, have the potential to revitalise the LCD screens in our phones, tablets, TVs and laptops.

It was widely tipped that Apple would use quantum dots in the iPhone 6 way back in 2014. It didn’t turn out that way in the end, of course, but we have seen the technology cropping up in the Amazon Kindle Fire HDX 7 and HDX 8.9 tablets.

But the most notable use of this technology to date has been in TV sets. LG, Sony, and Samsung have all released quantum dot TVs in recent years, with the latter completely diverting its attention and resources away from OLED TV development in favour of quantum dot LCDs.

Indeed, at CES 2016, Samsung has revealed an exciting new flagship range of SUHD TV sets, all of which contain quantum dot displays.

And it’s important because quantum dots is one of the technologies that’s driving the creation of high dynamic range TVs (HDR) and the creation of the new Ultra HD Premium standard.

Without quantum dots, TVs likely wouldn’t be bright enough to do HDR, but what is it about them that makes them so essential. Read on to find out.

What are quantum dots?

Simplifying things greatly (as this guide aims to do, mostly), quantum dots are incredibly small particles. They range between 2 to 10 nanometers in diameter, which is equivalent to 50 atoms. Yes, atoms. You can’t measure these things using your old school shatter proof ruler. It’s this small size that gives quantum dots the unique properties to improve our tech.

The colour light that a quantum dot emits is directly related to its size; smaller dots appear blue, larger ones more red. In LCD screens they’re applied as a way of eliminating the need for White LED backlights and colour filters.

What are the benefits of quantum dots?

For LCD screens, the benefits are numerous. They’re the kind of benefits that are simply no-brainers.

Higher peak brightness – One of the reasons TV manufacturers like quantum dots is that they allow them to produce TVs with much higher peak brightness. This opens up some interesting possibilities, such as enabling support for ‘high dynamic range’ TVs that support standards such as Dolby Vision.

In simple terms, Dolby Vision is a film standard that, when used, results in content that retains more colour and contrast information than existing standards. The result is pictures that have greater differences in the brightest and darkest parts of the image and look more ‘dynamic’ and real as a result.

Imagine shots where looking into the sun actually feels like looking in to the sun for real and you get an idea. To do this you need brighter TVs and quantum dots deliver exactly that.

Following the acceptance of 4K resolutions, HDR in general is the next big feature of TVs, and all of the top TV sets announced at CES 2016 this year have made bold claims about their ‘high dynamic range’ capabilities. Quantum Dot technology, like OLED, goes hand in hand with this advance. 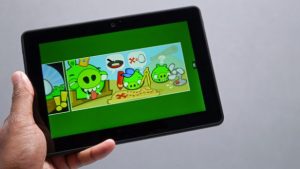 Colours on the Kindle HDX series are excellent

This is great, but it’s the combination of high colour gamut and great accuracy that’s really exciting. OLED screens look fantastic to the untrained eye, but many of those found in phones aren’t very accurate or ‘faithful’ to the actual colours they’re presenting. This can create imbalances, such as radioactive colours and iffy skin tones in videos and photos.

Taking a long term view, the impact of more devices with larger colour gamuts could mean a serious increase in the quality of video and other content. Specifically, in the level of detail you can see due to greater number of colours available.

This improvement in colour production is what’s driving the move towards HDR, which means adopting new standards for colour that cover more of the colours we can see in the real world. Current standards, like sRGB and Rec.709, only cover 80% of the colour available in the P3 colour space used by HDR TVs and content mastered for HDR.

None of this would be possible, on an LCD TV at least, without quantum dots.

Improved battery life in mobile gadgets – One of the contradictions of modern tech is that people say they want better battery life, but when it comes to it they’ll choose a slimmer, sleeker and ‘sexier’ phone over a chunky one with better battery life. Some of you reading this will be jumping up and down saying that’s not you, but it is most people. Phones haven’t been getting slimmer and lighter by accident. Companies make them that way because that’s what sells.

Another truism is that the most effective way, by far, to improve your phone, tablet or laptop’s battery life is to simply turn the brightness down. You can fiddle with the settings as much as you like, but it’s the screen that sucks down the most power. Which is why the potential power savings of quantum dots, believed to be up to 20 per cent, are so attractive.

What quantum dots promise, on paper, is superior image quality and a reduction in power use. That’s a powerful combination, especially for a company like Apple that’s loathed to compromise on design for the sake of practical things like larger batteries.

(This is also yet another reminder that the slow pace of battery tech development is holding back our tech. Since it hasn’t improved markedly, companies are forced to find power savings elsewhere.)

What are the downsides of quantum dots?

While there are doubtless plenty of complexities in integrating quantum dots into screens, from an end user perspective the only downside we’ve seen thus far is (an actually quite serious) light bleed issue. This was seen on the aforementioned Kindle HDX tablets, which were the first quantum dot tablets.

While not visible under many conditions, any white background (i.e. when reading a book) exposed very irritating bleed from the edges. Rather than white light, the bleed on the Amazon Fires was blue. Why? Because the backlight LEDs are blue.

This isn’t a trivial problem. When we reviewed both these Amazon tablets back in 2014, we were impressed by the colours, contrast and brightness, but the light bleed was profoundly annoying – enough so that it devalued the good parts. Solving this issue is vital to whether we see quantum dot phones and tablets, but we’d put our money on it getting sorted fairly soon. Apple reportedly has patents describing how it plans to solve this particular problem.

Since then, however, it’s clear TV manufacturers have this paritcular problem under control, so we’re not too concerned about this issue anymore.

Should you be excited about quantum dot technology?

Definitely, yes. In fact, we’d argue that quantum dots are a more interesting development than 4K TVs in some respects. While a sharper picture is great, dynamic contrast – the difference between the brightest and darkest part of picture – has a huge impact on the viewing experience. Quantum dots give LCD TVs the colour depth and contrast to move our viewing experience forward. So next time you buy an LCD TV, you’ll want one with quantum dots in it.