Is it worth buying a curved TV? We look at the benefits of upgrading from a flat screen telly

Curved TVs aren’t new any more, but is it worth buying one? We at TrustedReviews have tested a fair few curved TVs over the past two years or so, and we’ve learnt about all the benefits and drawbacks of buying one. So here are the pros and cons of buying a curved TV.

The arguments in favour of Curved TVs…

2. The sense of ‘depth’ is enhanced
One of the most common reactions from people watching a curved screen for the first time is that it looks like 3D, even when the source is only 2D. This is because curving the edges of the image towards the viewer enhances the visual perception of depth in what you’re watching. Samsung underlines this by applying depth enhancement processing to its curved TVs that adjusts the contrast of different parts of the image to boost the sense of field depth.

3. You get a wider field of view
Bending the edges of the image towards you makes you feel as if you’re seeing a wider image than you get with a flat screen. Draw lines from your head position to the edges of, say, a 65-inch flat TV and then draw lines from your head position past the edges of a 65-inch curved TV to the same plane you’d have been watching the flat screen in, and the curved screen’s image appears to stretch further across the wall than the flat TV image, despite the screen sizes involved being ostensibly the same.

4. Contrast is better than ‘non-curved’ screens
This is an interesting one. The argument goes that curved screens focus the light coming from the screen more directly at your eyes – in much the same way satellite dishes strengthen signals by focussing them onto an LNB – and so can deliver between 1.5x and 1.8x higher contrast than flat screens.

5. Uniform viewing distance
The argument goes that curved TVs track the rounded shape of our eyes better, and thus deliver a more focussed, comfortable image than flat screens. This argument is born out to some extent by the use of curved screens in commercial cinemas, where the curve helps the projected image retain even sharpness right into the corners of their vast screen sizes.

Samsung has taken this argument so seriously that it’s set its curvature level at that of a 4200mm-radius circle, appropriate to the current average TV viewing distance of 3.2m (based on studies conducted in America and Germany). However, we haven’t really seen much impact from this benefit on the relatively small curved TV screens we’ve had so far. Maybe it will deliver more tangible benefits when the 70-inch plus curved TVs start to roll in.

6. You get a wider effective viewing angle
This doesn’t make much sense on paper. Logic dictates that curving the edges of the image forward should reduce viewing angle support, not increase it. However, LCD TVs have a directionality problem, whereby the way they push light through their LCD arrays means that viewing from down an LCD TV’s sides means you usually have to put up with quite drastic reductions in colour saturations and contrast.

With curved screens, though, the way the curve adjusts the direction of the emitted light means that contrast and colour retain almost perfect accuracy if you watch from the side – right up to the point, at least, where the curve causes other viewing angle issues discussed in the ‘cons’ section…

7. Curved TVs just look cool
Picture fans will despair at us even considering this reason to buy a curved TV. However, design now ranks high on a typical household’s TV priority list, and most (though definitely not all) people who behold a curved TV think they look lovely. When they’re on their desktop stands, at any rate… 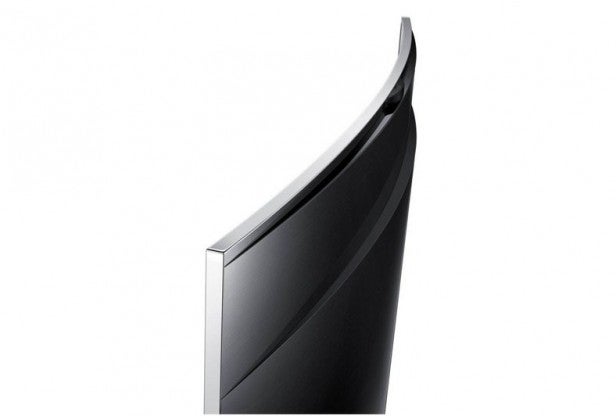 The arguments against curved TVs…

1. The curve exaggerates reflections
If you’ve ever stood in front of one of those trick mirrors at a fun park, you’ll know that shaped glass can do weird things to reflections. It’s the same deal with a curved TV. Anything bright in your room – especially direct light sources opposite your TV – has its reflection on a curved screen stretched and distorted across a wider area of the screen than would occur with a flat TV. So if you buy a curved TV, you’ll probably find you need to introduce some extra light control elements to your viewing room.

The thing is, while the curve prevents flat LCD’s usual reduction in contrast and colour performance with off-axis viewing, inevitably the curved shape can negatively affect your image’s geometry when viewing from down the TV’s side.

Surprisingly this problem doesn’t really become uncomfortable to watch until you get to around 35 degrees either side of directly opposite the screen (an angle Samsung itself agrees with us on). But as soon as you get beyond 35 degrees images quickly start to become almost unwatchable thanks to the way the side of the picture nearest your seating position starts to look foreshortened versus the opposite side.

Your brain tries to compensate for the distorted geometry it’s witnessing too, which means off-axis viewing can be fatiguing.

3. You need to be in the sweetspot to get most benefits
If you want to get the maximum impact from the immersive and depth-enhancement elements of the curve, you need to be sat right opposite the centre of the screen – and ideally at the perfect distance from the screen too.

To be fair, the idea that you need to be sat in a very specific ‘sweet spot’ to watch a curved TV hasn’t proved as fraught an issue as we’d once feared, since the 70-degree effective viewing arc provides enough room for multiple people to watch a curved TV without the curve actively upsetting their experience. But at the same time, the area within which you need to sit to fully appreciate the curve’s benefits is in still quite small.

4. Curved screens need to be big
Our experience to date is that the effectiveness of curved screens is directly proportional to their size. With all of the 55-inch models we’ve tested the curve’s benefits felt pretty minimal, while some of the problems – particularly the sweet spot issues – were more noticeable. With the 65-inch models it’s easier to appreciate the picture benefits while feeling less aggrieved by the negatives (except for the reflections one). Bigger screens support more viewers more easily too.

Despite enjoying the 65-inch models, though, our feeling is that the curve will only potentially feel of significant benefit at truly colossal sizes of 70 inches or more.

5. Curved screens make awkward wall flowers
While Samsung does do wall mounts for its curved TVs, our impression is that curved screens look rather awkward when hung up. Certainly they stick out a long way from the wall at their extremities, flying in the face of the whole ‘hang on the wall telly’ experience flat screens were originally designed for. Unless you live in a light house or windmill… 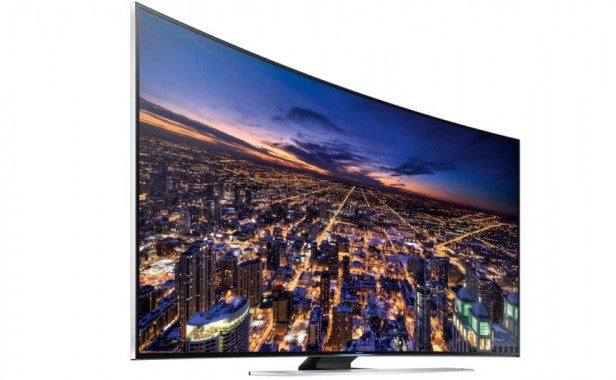 Should you buy a Curved TV right now?

From our experience so far we’re feeling fairly neutral about curved screens.

This might sound a bit dull, but neutrality is actually quite a step forward from the hostility we’d been feeling towards curved screens prior to us actually getting to live with a few.

One thing we can say for sure is that curved screens make more sense on bigger screen sizes, to the point where making a 55-inch TV curved is of questionable benefit. But we have quietly enjoyed the curve on the 65-inch offerings of Samsung and Sony, and as a result we’re at least intrigued to see what we make of even larger curved models when they arrive.

But, for most people, we suspect flat screens are still the best bet.

Have you spotted any great curved TV deals recently? If so, let us know via Facebook or tweet us @TrustedReviews.