What is the Panasonic Firefox My Home Screen 2.0 smart TV system?

The Firefox My Home Screen 2.0 smart TV system – which we’ll just call Firefox TV from now on, shall we? – is the latest interface for Panasonic’s higher-end smart TVs. It’s been developed in conjunction with Mozilla, maker of the Firefox web browser, which should mean extra functionality from opening up TV app building to the Firefox community.

Compared with the frankly rather drab and dated appearance of most aspects of Panasonic’s previous My Home Screen smart system, Firefox TV is immediately like a breath of fresh air. When you first hit the Home button on the remote control, a shadowy veil falls over the picture you were watching (without hiding it completely), over which are superimposed a trio of large, colourful circles. The one on the left is labelled Live TV, the centre one Apps, and the right-hand one Devices. And that’s it.

The Firefox TV home screen does also include a couple of small icons in each top corner of the screen, one offering access to a search tool and the other linking you to an attractively presented tour of what the Firefox OS can do for you.

Perhaps the single most important of these Firefox features is its effortless customisability. With just a couple of clicks you can get a shortcut for any app or content source – even individual TV channels or Web browser pages – to appear on your Home page, alongside the initial trio of icons we’ve already described. The circles just reduce in size to accommodate the additions, and can be quickly scrolled along if you’ve added so many that they no longer fit on the screen in one go. 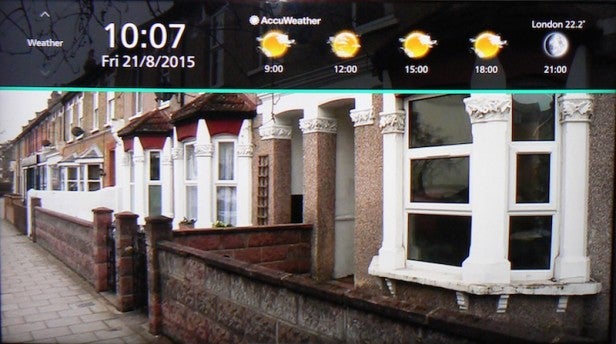 What’s more, you can even customise the running order of the apps on the home page, so for instance you can make sure Netflix always appears in pride of place at the left side of a customised home page icon list.

There’s an argument, I guess, for the layout to change a bit more as you add more link icons, maybe arranging them in rows down the screen so that more of them can be shown at once. But actually I think the Firefox approach is perfect, as it means the home screen never looks cluttered or confusing. And since you can decide where in the running order each link appears, you can always ensure that your most regularly used apps can be reached with minimal scrolling. 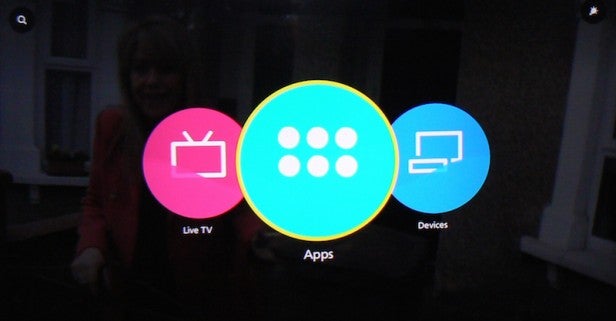 The Devices link takes you to a brilliantly simple graphical representation of everything you’ve got connected to the TV, be it something attached to an HDMI port, a USB storage device, or an external networked DLNA or Bluetooth device. This makes it a doddle to find and access all the myriad different source options available to you – especially as the other key Live TV source is catered for separately with its own large icon.

Another feature of Firefox TV is the Info Frame. Called up by holding down the remote control’s Home button, it presents you with four colour bar and text-based links, one presented on each of the image’s four edges. To select one, you simply choose the direction key on the remote that corresponds to the position of feature you’re after.

Along the top, by default, is a Weather link taking you to a simple but attractive icon-based weather report. To the right is a Notifications area where you’ll find messages related to your social media and smart TV subscriptions. To the left is a TV link that takes you first to a vertically scrollable strip of TV listings, showing information on what’s currently on each tuner channel, while scrolling left again brings you to Web Clip.

Web Clip defaults to showing Panasonic’s home page, and lets you jump straight to the page by selecting the clip. But you can add other clips of your own. It’s a shame, though, that it’s not a bit easier to personalise the Web Clip area; it would be great, for instance, if you could just set your own preferred home web clip from the Settings area that comes up if you scroll left again from the Web Clips strip. 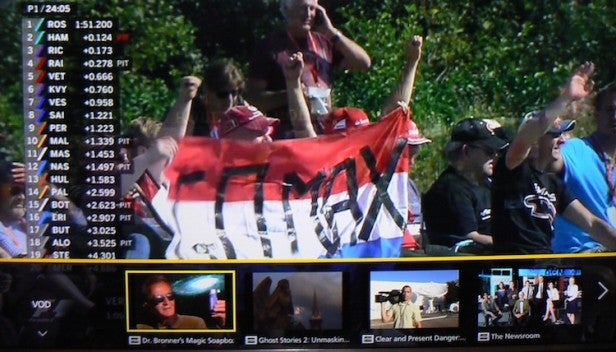 Finally, pushing down from the Info Frame screen brings you to ‘Recommended’ content. Or that’s the theory, anyway!

The first section (out of the box, though you can customise the running order) of the Recommended Info Frame area throws up links to on-demand video. The content shown here is apparently based on an analysis of your viewing habits, though it didn’t seem to catch on spectacularly well to our tastes. Maybe it needed a few more weeks to get to know us better.

In any case, though, this section is currently hamstrung by the fact that its content sources are limited at the moment to a couple of pay-per-view services: Viewster and Wuaki.tv, neither of which are really big hitters. There’s no input from the more popular likes of Netflix, Amazon or the UK catch-up TV apps.

It’s aggravating, too, that this part of the Info Frame doesn’t tell you up front which service a recommended VOD film is available on; you don’t find out until you click through to it. Which is frustrating if it turns out the show/film you decided to watch turns out to require you to sign up for a service you don’t want to join, or pay a fee that you don’t want to pay. 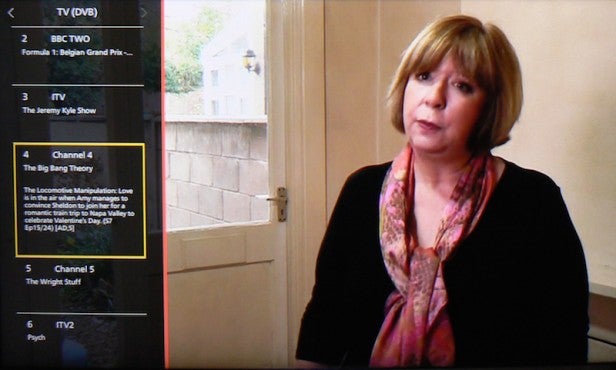 Scrolling down again brings you to a TV Program section. Again this is supposed to show highlights based on an assessment of your viewing habits, but it didn’t really seem to do much at all during our tests. We guess it could be another slow burner that only comes into its own when you’ve had the TV for a few weeks, but it’d be nice to have a bit more activity from it from day one.

Scrolling down again brings you to a list of stuff you may have recorded to an attached HDD – a useful shortcut, certainly, but not one that really lives up to the Recommended theme.

One more scroll down gets you to a YouTube content list, showing direct links to YouTube videos. Initially this content tends to show links to trending videos, but again Panasonic assures us that if you use it enough it’ll start to get a read on the types of video you like to waste your time watching. 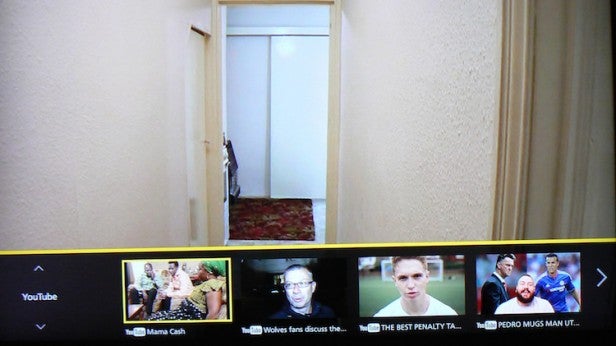 While we’re always fans of systems that recommend content to us, at the moment the Firefox recommendations engine feels rather vague and slow to learn, making it easily the weakest part of the Firefox TV experience.

The one key area of Firefox TV that we haven’t addressed yet is Apps. The Apps hub page shows pretty circular icons for all the apps you’ve already got installed, as well as a link to Panasonic’s App Market, from where you can browse and download other apps you might be interested in.

The apps available out of the box are Netflix, FreeviewPlay Catch up, Wuaki.tv, Viera link, a calendar, Firefox Browser, Amazon Instant Video, BBC iPlayer, YouTube, Recorded TV, Accuweather, Demand 5, BBC News and BBC Sport. Some of these refer to the TV’s functionality, while some refer to third-party services, of course – but turning everything into an app is, as LG’s webOS platform has proven, key to delivering a fully formed multi-tasking smart TV platform. 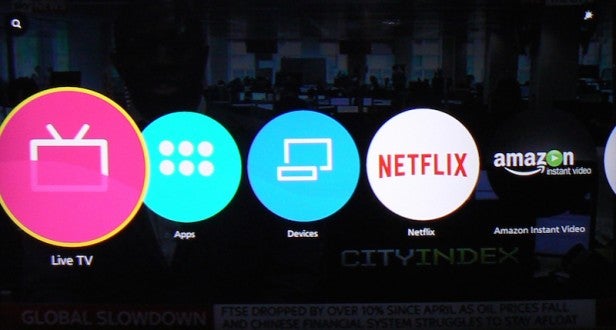 The FreeviewPlay link needs a bit more explanation. At the time of writing, if you select this you just get a message saying the service is coming soon, but what it will offer once it’s been added via a firmware update is Freeview’s latest, ultra-simple EPG-based interface for accessing on-demand catch-up content from all the UK’s major broadcast players. We don’t have an exact date for when FreeviewPlay will go live, but since we’ve always been told it will be summer 2015, we guess it should be happening very soon now!

One negative thing on the Apps hub page is a strip along the top showing scrolling adverts for shows, services or platforms. Our main gripe with this is that it eats up screen real estate that could have been better used for showing more links to our installed apps on a single page, reducing the need to scroll down the page. But at the same time they’re not so obtrusive that you can’t ignore them for most of the time.

One final key feature of the Apps Hub page is the way you can easily create shortcuts to your favourite apps on the main Firefox TV home page. You just press the Option button on the remote while a favourite app is highlighted, and then choose the Pin To Home option. Next time you hit the Home key on the remote, the app you selected will be there, alongside the default Live TV, Apps and Device options, as described earlier. 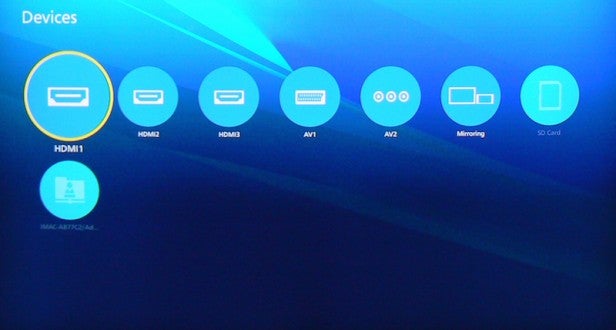 Clicking on the Apps Market brings you to the only throwback to previous Panasonic systems, with the familiar straightforward ‘shelves’ of apps broken into genres. These include Featured (promoted), Video and Movie, Music, Sports, Games, Kids, Social Networking, News and Weather, Health and Fitness, plus Lifestyle and More. In total we counted just over 130 apps already available across all these categories at the time of writing.

As usual it seems to us that the vast majority of the 130 extra apps available to download are of limited or no interest. But at least the way Panasonic orders its smart TV environment means that you don’t have to clutter the UI unless you really want to. 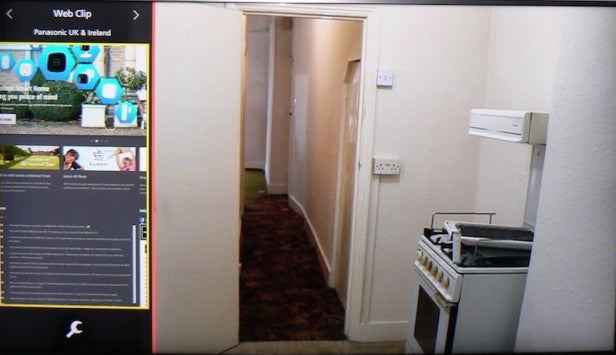 One final thing to add on the features side is that the implementation of Firefox hasn’t had any negative effect on Panasonic’s already impressive facilities for accessing external content and devices via DLNA or Bluetooth. Connecting and sharing content between smartphones, tablets and the TV is a doddle, and you still get impressive features such as the facility to set recordings and even watch either live TV or recorded shows streamed to your tablet or phone from the TV when you’re out of the home. Even when you’re abroad, in fact.