Panasonic’s glamorous new DX802 TVs (previewed here) stole the show at the brand’s recent convention in Frankfurt. However, it’s the entry-level 4K models represented by the new DX600 series that are most likely to shift in the biggest numbers. After all, they cost just £599, £799 and £999 for the 40-inch, 49-inch and 55-inch models respectively.

Given their likely popularity, I focused all my efforts on these affordable TVs in Frankfurt – in particular, the 40-inch model – to see if they might prove to be an even bigger bargain than Panasonic’s great value 2015 CX680 models (reviewed here). 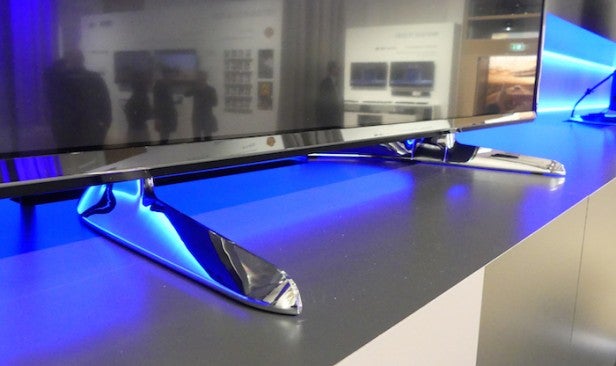 The DX600s are pretty easy on the eye for what can reasonably be called budget 4K TVs. The gently chamfered frame isn’t as slim as you’d find on premium TVs – including Panasonic’s own new higher-end TVs – but its glossy black finish combines handsomely with a slim metallic silver trim. The build quality is a little plasticky, but this isn’t noticeable from a typical distance.

There’s even some evidence of design innovation here. Not only can the TV’s shiny curved feet be mounted in either a wide or narrow configuration, depending on the width of the furniture on which the TV will sit, but they can also be attached facing either forward or back from the screen, depending on your tastes.

The DX600’s screen technology is interesting – and not entirely in a good way. For while the TX-40DX600 adopts a VA type of panel, the two bigger DX600s use IPS panels. This is surprising, given that last year Panasonic decided to halt introducing IPS TVs into the UK because of the issues such screens have with delivering a convincing contrast performance.

Not surprisingly, it was clear upon seeing all three DX600 TVs running together that there are distinct differences between the pictures achieved from the two IPS TVs and the VA 40DX600. In my opinion, the latter delivers much superior black levels and shadow detail, as well as a cleaner, more defined and punchy colour performance. 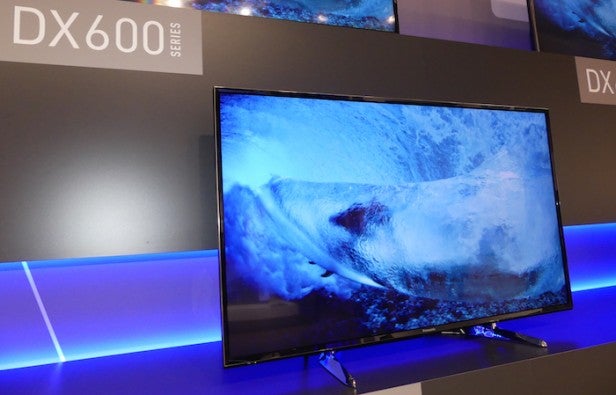 I’d need to have all the sets in a proper test environment to confirm 100% that the TX-40DX600 is the pick of the series. However, due to the differences apparent on the show floor, alongside its ultra-aggressive pricing, I’m going to focus on the TX-40DX600 for this first look.

All the DX600s feature edge LED lighting systems with adaptive backlight dimming – and, not surprisingly for their money, shun high dynamic range (HDR) support. There’s no 3D support either. However, 4K support is quite strong, with a quad-core processing engine and support for the VP9 4K YouTube format joining a pair of HDCP 2.2-ready HDMIs and support for both the Netflix and Amazon 4K streaming apps.

The set’s combination of frame interpolation and backlight scanning allegedly delivers an 800Hz motion effect too, which is an impressively high figure for this level of the market. This is good to see, given the negative impact LCD motion blur can have on 4K’s typical clarity.

One last stand-out feature on the DX600’s spec sheet is its Firefox smart TV operating system, which as discussed in our dedicated review is up there with LG’s webOS platform as one of our favourite smart TV systems.

On my initial look at the DX600’s pictures, I found it almost impossible to view them in isolation from the clearly superior pictures available from Panasonic’s step-up DX700 TVs sat alongside. Compared with the DX700s, the DX600 TVs’ motion looked less clear and their colours were less vibrant.

Of course, it’s hardly fair to compare the DX600 to more expensive TVs. Trying to focus exclusively on the TX-40DX600’s pictures, it becomes apparent that they show plenty of potential for such a cheap TV.

For instance, detail levels are impressively high – even though the 40-inch screen is pretty small by 4K TV standards. As suggested earlier, the 4K effect takes a bit of a hit when there’s a lot of motion in the frame, but from what I’ve seen so far, the TX-40DX600 suffers less with motion resolution loss than last year’s mostly impressive Panasonic CX680 series.

Colours are bright and subtle enough in their rendering to back up the 4K pixel resolution, and continue to look engaging and well balanced even if they’re not quite as richly saturated as those of Panasonic’s new step-up TVs.

The TX-40DX600 looks brighter than most affordable 4K TVs too. And, most promisingly of all for such an affordable TV, its handling of the few dark shots included in the demo footage shown at the Panasonic launch event – under, admittedly, quite bright lights – looked impressive. There were minimal signs of clouding and fewer signs of the greyness over black areas you often see with budget edge LED TVs.

At which point I need to remind you that I’m talking here specifically about the VA-type TX-40DX600. The black levels and shadow detailing in the larger, IPS-driven DX600 models are noticeably less impressive.

As a result of this, I’m yet to be convinced that the DX600 series will offer cash-strapped 4K fans the big-screen solution they’ve been hoping for. However, if 40 inches is ample for you then the TX-40DX600 is definitely one to keep an eye on.