Excels at hard crust, but other Panasonic models have more programs.

Bread made in bread makers rarely comes out with a nice robust crust, but Panasonic is on a mission to change that. The SD-ZP2000, officially nicknamed Croustina for some reason, is Panasonic’s first breadmaker to offer hard crust bakes. It has seven programs designed to bake bread in a way that results in a hard crust and a fluffy middle – so you can skip the trip to the bakery and enjoy homemade bread with ease.

Like Panasonic’s SD-ZB2512 and SD-ZX2522, the SD-ZP2000 comes at a higher-than-average price. But while the previous models had further gluten-free options, as well as the ability to make sourdough and rye bread, the SD-ZP2000’s range of programs is more limited.

What’s more, unlike its predecessors, the SD-ZP2000 doesn’t have separate yeast and seed compartments, putting the onus on the baker to not get the yeast wet and add in supplemental ingredients when required. While this is standard procedure with more affordable breadmakers, it’s surprising to see that in one with such pedigree.

Yet, if you like your crust hard, the SD-ZP2000 will produce delicious bread with a beautiful crunch. 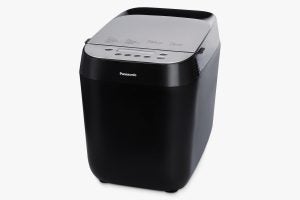 The Panasonic SD-ZP2000 Breadmaker has a sleek, subdued appearance. Its oval body is covered in matte black plastic (with grey on the lid), which nicely withstands fingerprints.

Some of the breadmakers I’ve tested have viewing windows, allowing you to keep an eye on your loaf’s progress. While this hasn’t been the case with previous Panasonic breadmakers, I always put it down to them having a double lid with yeast and seed dispensers.

As there is no double lid on the SD-ZP2000, I wondered about the absence of a window at first glance. But the inside of the lid here is covered in reflective metal, to ensure a more even bake. In addition to the hard crust programs, this is the second innovation from Panasonic here, purporting to mimic a traditional baker’s oven. It goes some way to explain the absence of the additional dispensers, too.

There are two temperature sensors. In addition to a sensor measuring the breadmaker’s internal temperature, a second sensor close to the control panel gauges the ambient room temperature. According to Panasonic, this information allows the machine ‘to select the optimum program to rise and rest the dough in any environment’.

On the outside of the lid, just above the control panel with the display, you’ll find a list of all 18 programs, including seven for hard crust, six for soft bread, two gluten free and three for doughs and jams. This is handy for selecting your suitable program, without having to refer back to the manual. 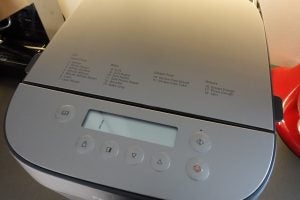 The control panel is easy to use, with separate flat buttons for program menu, loaf size, crust colour, as well as two for the timer, and ‘start’ and ‘stop’ switches. All the buttons produce loud peeps when pressed. The LCD screen is clear to read, although it has no backlight, meaning you can’t do your baking in the dark.

Not all of the features – such as the timer, loaf size and crust colour – are available for all programs. In fact, you’re only able to choose loaf size M or L for four of the ‘soft’ bakes, and crust colour – medium or light – for five of the ‘soft’ bakes. Meanwhile, the delay timer only works for basic recipes with no extra ingredients, so it’s available on three of the hard bakes, one soft bake, and for pizza dough.

At approximately 27cm wide, 34cm high and 42cm deep, the SD-ZP2000 is fairly easy to accommodate in the kitchen. However, you need around 62cm of clearance to open the lid. A 90cm power cable allows for the breadmaker’s flexible positioning on the worktop.

The SD-ZP2000 comes with a clear, no-frills manual with visual aids and one recipe for each of the 18 programs. You also get detailed handling instructions and a lengthy troubleshooting section.

Accessories include a measuring spoon and cup. Helpfully, the plastic double-ended teaspoon and tablespoon utensil has lines to mark half and quarter measurements. Meanwhile, the transparent plastic cup has clear ‘ml’ measurements, given in 10ml intervals. 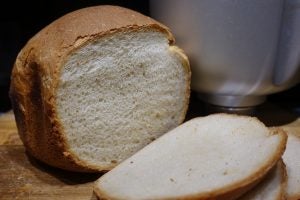 Intrigued to try out the SD-ZP2000’s signature bake, I start by making a white hard crust loaf according to the recipe provided with program ‘1’, which takes three hours and 15 minutes.

All hard crust bakes come in one standard size and crust colour, so what I end up with is roughly a medium-sized (573g) loaf. It has a nice colour to it, but there are some patches that are a little darker than what I would call ‘medium’. The loaf has a strong, crispy crust, and it’s fluffy on the inside. 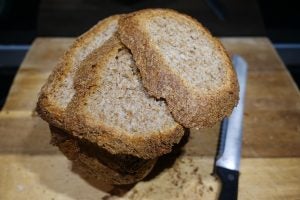 I then try making a hard crust wholewheat loaf, with the specific wholewheat program that takes five hours. The loaf comes out looking a bit smaller and denser than the white one, weighing 583g. The crust is definitely crispy here and crackles pleasantly when squeezed. The loaf has a good, consistent colour to it and is easy to slice even when slightly warm.

As my last challenge with hard crust, I make a ‘lean’ loaf – essentially plain white bread with no added sugar or butter. The lean program takes a whopping six hours, which becomes apparent looking at the resulting loaf – it’s a tad burnt on top and sizzles a while after being removed from the pan. However, this healthier loaf is just as good to eat as the regular hard crust white loaf, as long as you’ve got the patience for it. 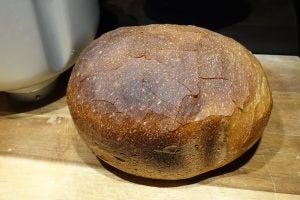 In order to really compare the heft of the hard crust, I turn my attention to making soft loaves. Interestingly, there is no program for making soft wholewheat bread, with the only wholewheat options being hard crust plain and hard crust raisin loaves.

As the soft program enables you to choose the loaf size and crust colour, I opt for a medium-sized, medium-coloured loaf. It comes out slightly bigger than the hard crust white loaf, weighing 587g. The golden brown crust is thinner and more fragile, becoming softer as the bread cools.

Overall, this loaf is very similar to what you would normally expect from a breadmaker. I had to take care when slicing it and wait for it to cool in order to not crush it. 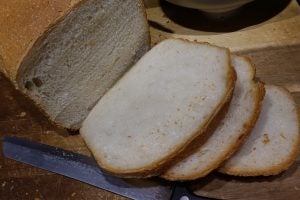 Next up, I try making the soft ‘rapid’ bread, which only takes two hours – the shortest bread baking program available with the SD-ZP2000.

The resulting loaf comes out light and smaller than the hard crust white bread and its soft counterpart – but rapid loaves are often smaller and lighter in colour. It weighs 653g and is soft and even on the inside.

This is the one occasion where the kneading blade remains stuck inside the loaf and has to be removed carefully once the bread is cooler. Most of the time, the blade will stay with the bread pan – even if it takes some vigorous shaking. 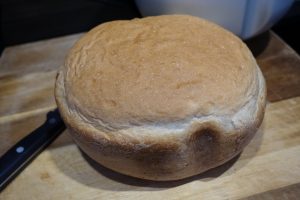 Finally, I set my eyes on the brioche program. Like with the Panasonic SD-ZX2522, the brioche mode here requires you to add extra butter during the kneading process. Roughly 55 minutes from the start of the program, you will be alerted with several loud beeps, after which you have about five minutes to complete the task.

But with the SD-ZP2000, you will be prompted again after another 45-55 minutes. At this point, the instructions advise you to take out the dough and the kneading blade from the bread pan, and apply a coat of butter to the pan before replacing the dough. You have 10 minutes to complete that process before the baking restarts automatically.

The brioche loaf has a good rise. The crust is soft, brown and slightly flaky, while the inside is pale-yellow, light and fluffy.

Having previously used the SD-ZX2522’s brioche mode to make panettone, I then decide to adopt the brioche recipe of the SD-ZP2000 to a panettone one. That’s right, I’m freestyling.

While keeping most ingredients the same, I add in half a tablespoon more of sugar and eschew milk powder, replacing the water in the recipe with semi-skimmed milk. When adding the butter, I also chuck in 50g each of orange peel, sultanas and currants. 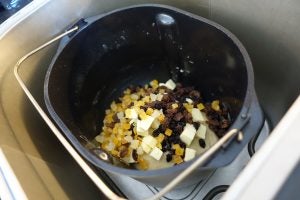 Mixing in additional ingredients causes the machine to get a little louder – there are some popping sounds – but generally the SD-ZP2000 runs remarkably quietly.

I opt for the medium crust colour, which comes out nice on top, although perhaps a little too brown around the bottom. But the resulting panettone loaf is soft and delicious. It’s light and fluffy on the inside, with a very even spread of fruit. 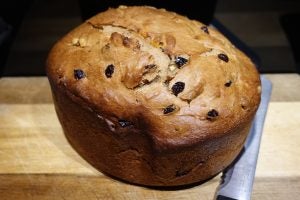 The instructions also mention you can make brioche the ‘simple way’, by adding the extra butter with other ingredients at the beginning of the process. While there is an ominous warning – ‘this brioche is a little different than the other’ – the subsequent brioche is just as light and fragrant as the first one.

I also decide to forego the second manual process of brioche-making: the removal of the kneading blade and the buttering of the pan. There’s just no need. The loaf doesn’t get stuck in the pan and the kneading blade doesn’t do too much damage. The brioche has perhaps a slightly thinner crust – a possible result of not having baked in a buttered tin – but the overall difference is negligible.

Generally, the SD-ZP2000 performs well, even if the results are slightly more brown than ideal. Still, the difference is mostly cosmetic – as nothing is overdone enough to affect the flavour or texture. 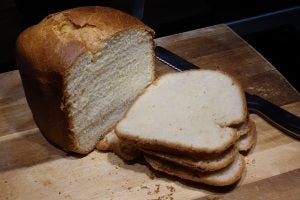 Should I Buy It?

If you love a hefty crust above all else, the Panasonic SD-ZP2000 is the breadmaker for you, delivering consistently delicious results.

However, if – like me – you’re a fan of variety, it’s worth keeping in mind that for a similar price, you can get your paws on a Panasonic SD-ZX2522 that offers more in terms of programs, including sourdough, rye and extra gluten-free options.

Excels at hard crust, but other Panasonic models have more programs.