There’s nothing quite like the smell and taste of freshly-baked bread. Fortunately, you don’t have to go through the pain of kneading and proving, as one of our best bread makers will do the job for automatically. Any of the models below will help you avoid the need to buy bread, with the right ingredients to hand.

We’ve reviewed the top-selling bread machines, putting each one through a range of recipes, so that we can bring you this list. Take a look at our summary below or scroll down to find out more information and links to read the full reviews.

Learn more about how we test breadmakers

We test a series of standardised recipes for wholewheat and white loaves, ensuring to check crust firmness and general cooking quality; in other words, how the bread cooked through out.

We also test how well they cope with loose ingredients (seeds and fruit) and how easy are the instructions to follow. The ultimate bread maker with a wide variety of options

High-end bread maker, the Panasonic SD-ZX2522, is the best choice if you want to create a variety of loaves, and even tackle bakes that are traditionally more complicated and tough.

The SD-ZX2522 certainly isn’t fast, but its methodical pace means that you get the best-quality bread. With our white test loaf, we got the best bread that we’ve seen. Switching to rye, we achieved a moist, well-cooked loaf; our only issue is that there’s no blade-removal tool, so you have to handle this by hand.

All further bakes were excellent, with a panettone, sourdough and a wholewheat olive loaf all handled perfectly. For the latter, the ingredient dispenser distributed the whole pitted olives through the finished bread.

Although a little expensive, the Panasonic SD-ZX2522 is an outstanding bread maker that can handle all types of bread, consistently outputting delicious loaves. 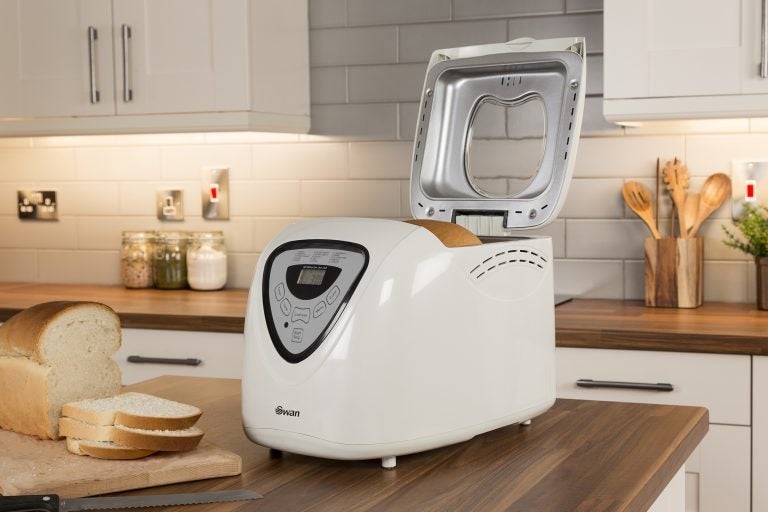 The Swan SB1041N Quickbake proves that bread makers don’t have to be super-expensive. If you’re on a tight budget and want something that’s easy to operate, then this is a great choice.

There’s no seed-and-fruit dispenser, so anything more complicated has to be handled manually. But if you want a bread maker that can create basic loaves quickly, the Swan SB1041N is up to the task.

Testing with a simple white loaf, the finished loaf had a golden-brown crust. Cooking was a little uneven on the outside, although the inside was consistent and strong enough not to be torn by a cold buttery knife.

We’d avoid using the fast-bake option: we found that the bread was pale on top and almost burnt on the underside; the longer cook programmes do a far better job. Provided you’re not looking for anything too fancy; the low-cost Swan SB1041N Quickbake is a good choice. 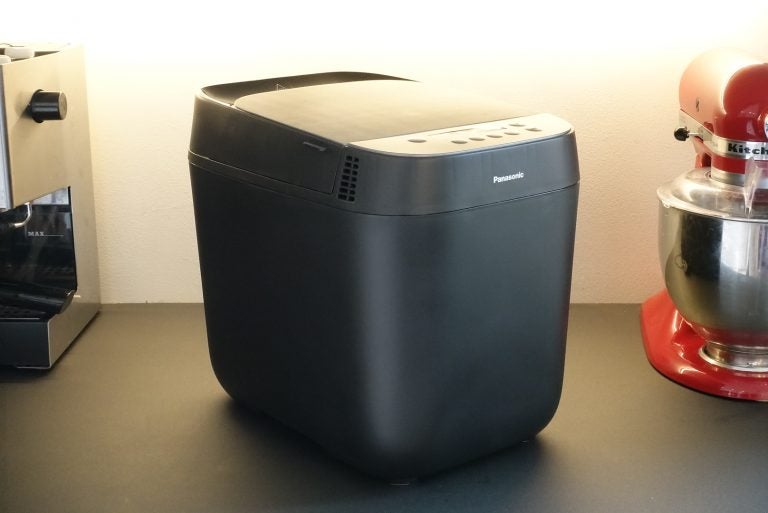 A great machine if you want a crusty loaf

Most bread makers tend to deliver bread with a soft crust; that’s great for many styles of loaf, but what about those times when you want something with a hard crust for that extra bite? Step forwards, the Panasonic SD-ZP2000, the first bread maker to deliver a true hard crust.

In terms of delivery, there’s little that we can fault with this machine. Both wholemeal and white loaves came out with a nice colour and hard crust, with a fluffy interior. This machine can also churn out a decent soft-crust loaf, too. The downside is that this model has fewer other programs, so you may want to look elsewhere if you want sourdough, rye and extra gluten-free options. For those that want a hard crust, this is the model to buy. 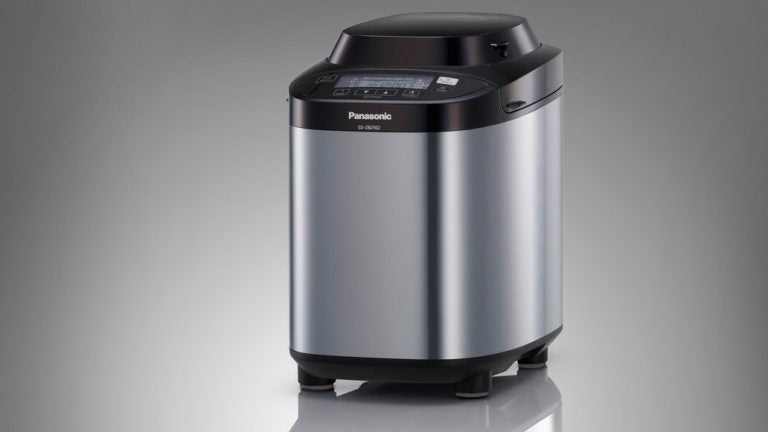 A good all-rounder with integrated yeast and seed dispensers

If you want the absolute best bread maker out there and hang the cost, the Pansonic SD-ZB2502BXC is it. This advanced machine costs over £100, but it makes outstanding bread and has all the features you need to make a wide variety of bread, doughs and jams.

A few things make it stand out. First, it has a seed and dried-fruit dispenser, plus a yeast dispenser that perfectly separates the yeast and water. Second, it comes with a rye kneading blade, so you can make 100% rye loaves as well as mixed loaves.

Finally, it comes with a comprehensive recipe book of more than 100 recipes. Sure, you can find more online, but all these recipes are tuned to work perfectly with the Panasonic bread maker. It’s a great all-round package that you’ll love to use. 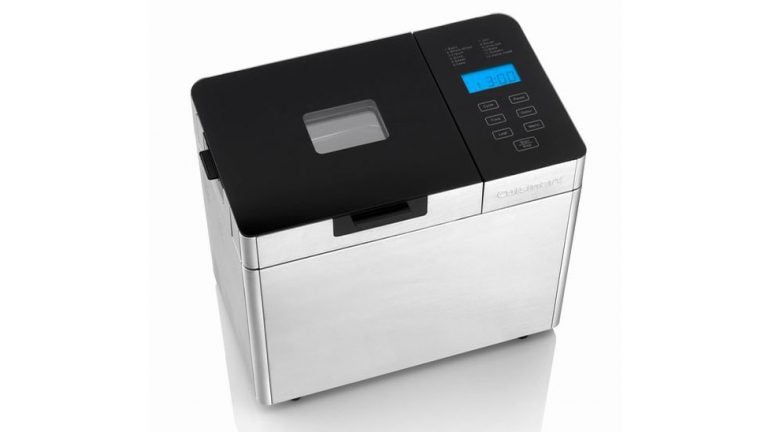 A great choice for anyone that wants big loaves

If you want something a little more stylish for your kitchen, then the Cuisinart CBK250U Automatic Breadmaker is a great option. Although it features a seed and dried fruit dispenser, it looks like a sleeker, more modern appliance.

It makes very good bread, too, of course – and it also makes the largest loaves of any bread maker we’ve tested. Its biggest loaf is a whopping 700g, which is a 100g more than the Panasonic can manage.

One final interesting feature no other machine has is a programmable setting. This lets you create your own recipe, setting the baking time, rest time, and so forth to your own preferences. It’s a nice option if you want to fine-tune your efforts to get the perfect loaf. 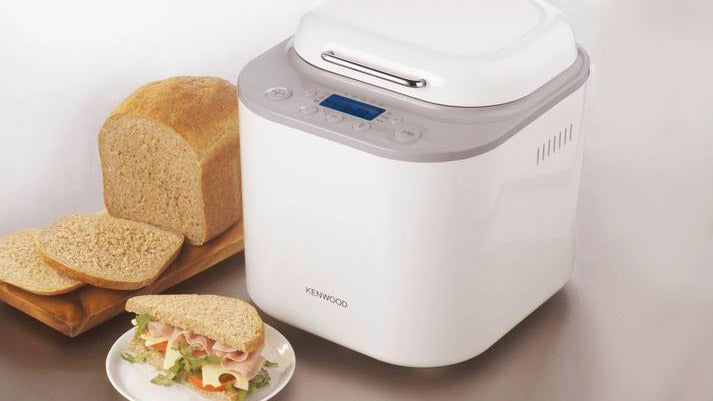 A decent budget option with a few neat touches

If you’d rather not spend upwards of £100 on a bread maker, the Kenwood Bread Maker BM260 is a good compromise. It lacks extra features such as dispensers for seeds and yeast, but it isn’t short of a trick or two itself.

Our favourite feature is the supplied adjustable spoon. This makes it easy to measure out ingredients perfectly, so you don’t have to get the scales out. The breadmaker is also fan-assisted to help speed up the baking process.

We also rather like the provided recipe book, which includes some unusual recipes such as a caramelised onion loaf and even a chocolate loaf. Yum.

What main features do I need?

It’s worth keeping an eye out for a few key features in your hunt for a breadmaker. For instance, most machines offer three loaf sizes, but some compact models offer only one or two. Your breadmaker should also have a minimum of around a dozen programs including white, brown and wholemeal loaves.

Many bread makers offer ‘fast-bake’ programs but make sure you keep an eye out when considering these since some only have fast recipes for white loaves – not very helpful if you only eat wholemeal bread. Also, check out the timings of such programs, as some machines can make a large white in less than an hour, while others take longer.

What about a timer?

Avoid any bread maker that doesn’t have a timer delay. These are handy for baking bread that’s ready just in time for breakfast or your return from work. Other extra perks can include a seed dispenser to drop in seeds at just the right time, a yeast dispenser and a kneading blade for loaves that use rye flour.

What else should I look out for?

A seed-and-nut dispenser is a great way to create filled bread, with the bread maker releasing the ingredients at just the right point so that they don’t sink to the bottom of the loaf.

These aren’t just for seeds and nuts, either: many models can use the same dispenser for fruit, too, which is great if you want to make something different or tackle a sweet, rather than savoury, bake.

Do I need to use bread flour?

It can be tricky to buy bread flour all of the time, so can you use normal flour in your recipes? The answer is, maybe. Bread flour, usually called strong bread flour, has a higher percentage of gluten (typically 12% to 14%). Gluten is important in the breadmaking process, creating the elastic texture in the dough.

As the dough proves, the yeast produces carbon dioxide that causes the bread to expand and hold its volume; without enough gluten, the bread won’t rise as much. Most all-purpose flour in the UK has a gluten content of only around 10%, which won’t hold volume as much. So, you can make bread with all-purpose flour, but you’ll find that it won’t rise as much and you won’t get the best results.

Can you make rolls in a bread maker?

You can’t bake bread rolls in a bread machine, as they are designed for baking loafs whole. However, this doesn’t have to restrict you, as the hardest part of making bread is in the mixing and proving, which the bread maker does automatically for you.

So, to make bread rolls, you can first use your machine to make and prove the dough. At the end, you can remove the dough, cut it up into roll-sized chunks and then bake yourself in the oven to get perfect results.

What kinds of bread can I make?

You can make loads of different kinds of bread in most bread makers, ranging from traditional loaves to those with added seeds or nuts. There are some limitations with some models, but for a better idea on what you can and can’t do, check out our guide to the best bread maker recipes. You can also find more information on getting the most out of a machine by reading our bread maker tips and solutions article.

Is the bread better than shop-bought?

It depends on what you mean by better. In terms of cost, when factoring in the price of a bread maker, you’ll most likely find that store-bought bread comes in a little cheaper, particularly for budget loaves.

However, with your own bread maker, you can decide what goes into each bake, giving you more control over the final product. This also means that you can tweak recipes to your liking, producing results that you’re happier. And, let’s face it, there’s nothing quite like the smell of freshly-baked bread, and you just don’t get that if you pop down to your local supermarket. For more information, check out our article, breadmaker vs store-bought.

A consistent and versatile breadmaker under £100