What is the Panasonic SC-GA10?

There are plenty of AI-equipped speakers on the market right now, but many of them sound rubbish. Enter the Panasonic SC-GA10, a hi-fi speaker with the added benefit of being armed with Google Assistant.

The SC-GA10 is easily a better-sounding alternative to the Google Home. The only issue is that Panasonic isn’t alone in pushing the ‘sound first’ idea: the Sonos One, Apple Homepod and Sony LF-S50G also prioritise audio performance.

Thankfully, Panasonic has a few little tricks to help the SC-GA10 stand out. 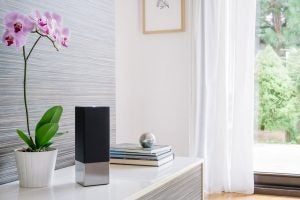 One look at the Panasonic SC-GA10 and it’s clear we’re dealing with a classier product than the Google Home. Instead of being covered in plastic, the speaker is finished in aluminium and a fine fabric mesh.

The unit itself is a little boxy, which some might consider boring, but key is the fact that the GA10’s aesthetics don’t immediately scream ‘speaker’. Neither does it look like an air freshener. If you have a love for geometric decorations then this speaker will do very nicely.

It’s available in a combination of black and silver, or white and silver. Unlike the Sony LF-S50G, the external shell isn’t removable for cleaning. If you intend to place the speaker in a kitchen and are a fan of tomato sauce, I’d suggest opting for the black one.

On the top of the unit is a touch-sensitive control panel. Panasonic has avoided the overly simple control scheme of the Google Home. Instead, you get a full suite of buttons that wouldn’t be out of place on a micro hi-fi system. 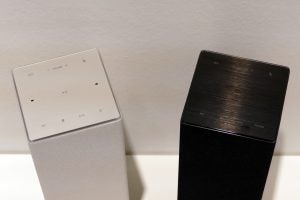 The buttons include power, volume, mute, play/pause, network (for Google Cast), Bluetooth, aux and Music Control (for use with the dedicated app). Some might find it a little overwhelming in contrast to the overly simplified approach of most smart speakers, but I love it. Too many products require you to rely on your smartphone as the sole interface; the GA10 provides a little more flexibility.

Round the back are only two connections: the mains plug and a 3.5mm auxiliary input. Note that the power unit isn’t integrated – there’s a separate power brick. This isn’t ideal, especially if you want a neat kitchen worktop. On the plus side, the 3.5mm input isn’t something offered by the standard Google Home, nor the Sony.

On the inside, there are two soft-dome tweeters, each with a silk diffuser that opens at 45 degrees to the left and right. This means you should get a wide soundfield. Bass is handled by a 8cm woofer with twin voice coils, as well as a long reflex port. That’s a far beefier setup than that offered by the Google Home. 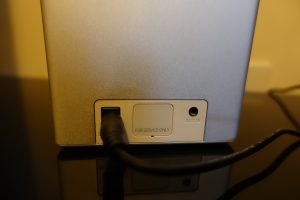 The SC-GA10 is armed with Google Assistant, the AI helper that features in Google Home and the latest Android smartphones. This means it can perform pretty much any task that Google Assistant can on those other devices.

Basic web searches for the weather, a recount of the news headlines, bad jokes and random trivia are all possible. You can also set alarms and timers, or compile to-do lists. If you have smart home devices, such as Philips Hue, you can use your voice to control these devices too. Read our ultimate Google Assistant Guide for the latest on what it can do.

On the music front, Google Assistant plays nicely with any Chromecast product on the same network, so you can use the SC-GA10 as part of a multiroom audio system. 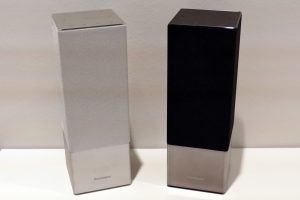 Compatible streaming services include Spotify, Google Music and TuneIn Radio. It’s even possible to stream music stored on locally networked devices such as smartphones and NAS drives, use Bluetooth, or go old-school with a 3.5mm input – all of which can be controlled by the Panasonic Music Control App.

While I appreciate the numerous buttons on the device itself, the app is still the best way to control the speaker. For starters, it lets you stream music stored on your phone or a networked hard drive. There’s also basic EQ adjustment, a bass enhancement toggle, a dimmer for the LED indicators – and an option to pair two GA10 speakers for a stereo setup. 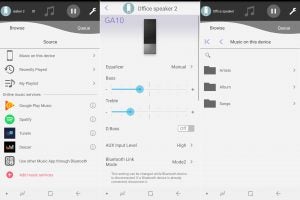 It’s clear that Panasonic’s audio-first approach has paid off. This is a sound system primarily; an assistant second.

For starters, the sound is spacious. From first glance of the SC-GA10’s shape you’d think it would offer a tall and narrow sound, but it’s quite the opposite. This is no doubt thanks to those diffusers, which make the speaker sound wider than it is.

Of course, the form factor means there’s nothing in the way of stereo separation, so don’t expect directionality from Bowie’s Space Oddity, for example. You’ll need two speakers (paired) for that.

It’s an easy listen, too. The treble is never harsh and the mid-range is smooth. The bass, while not as taut as I like, makes a compelling case for Infected Mushroom’s Albibeno.

This remains true even on cranking up the volume. There was no evidence of strain – hardening treble, distorted bass, rattling cabinet; nothing that suggests the SC-GA10 can’t handle a good party. I certainly couldn’t say that about the Google Home. 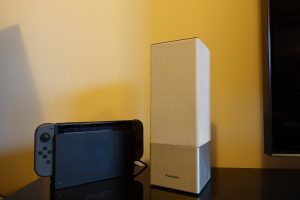 I did notice that by default the speaker seems a little forward on the mid-range across a variety of genres – you’ll want to go into the settings part of the app and tweak the EQ to your liking. I wasn’t convinced the D. Bass (bass enhancer) mode did very much, but it’s worth cycling through the EQ presets. I preferred the manual mode with the treble lowered and bass raised a notch or two from centre.

Against the competition? I definitely prefer this to the Sony LF-S50G; the Panasonic SC-GA10 has a more solid, hard-hitting sound. However, the Sonos One (currently Alexa-only but Google Assistant support is coming) sounds significantly more dynamic and powerful – and that can be had for £189. Then there’s the Apple Homepod – if you can forgive the large price tag and awkward usability, it sounds the best of the lot.

That said, the SC-GA10 takes a good stab at differentiating between highs and lows, instead of crushing them together. 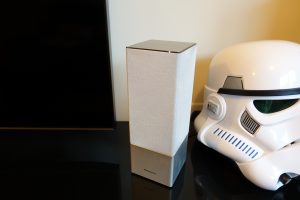 Why buy the Panasonic SC-GA10?

Panasonic has managed to achieve what it set out to: to make a smart speaker that takes sound seriously. The SC-GA10 scores bonus points for offering input selection, with Bluetooth, 3.5mm and network streaming alongside Google Cast. For those who want an AI helper, but who aren’t willing to sacrifice too much on the sound quality or functionality of a proper sound system, the SC-GA10 is worth investigation.

It’s certainly one of the better smart speakers out there – although it isn’t the cheapest. The Sonos One costs less and offers a more muscular, musical sound, and remains my smart speaker of choice.

Step aside, Google Home. The Panasonic does it all – much better.