What is the Sony LF-S50G Smart Speaker?

We’re now well into phase two of the smart speaker movement. That is, speakers armed with voice-activated AI assistants.

Phase one saw the Amazon Echo hit the market first, with the Google Home hot on its heels. Phase two began when third-party manufacturers started taking these gadgets seriously enough to do something about it.

Now we have the Sonos One, the UE Megablast, the Panasonic SC-GA10 – and the Sony LF-S50, which runs Google Assistant. The key advantage of buying third-party tends to be superior audio quality, as the standard Echo and Home don’t sound great. The Sony LF-S50 goes a little further by adding a premium design, a useful clock face and touch-free gesture controls.

While there’s no unique selling point, you do get a great combination of neat ideas. Not all of them are flawlessly implemented, but this is a significant upgrade over the standard Google Home. 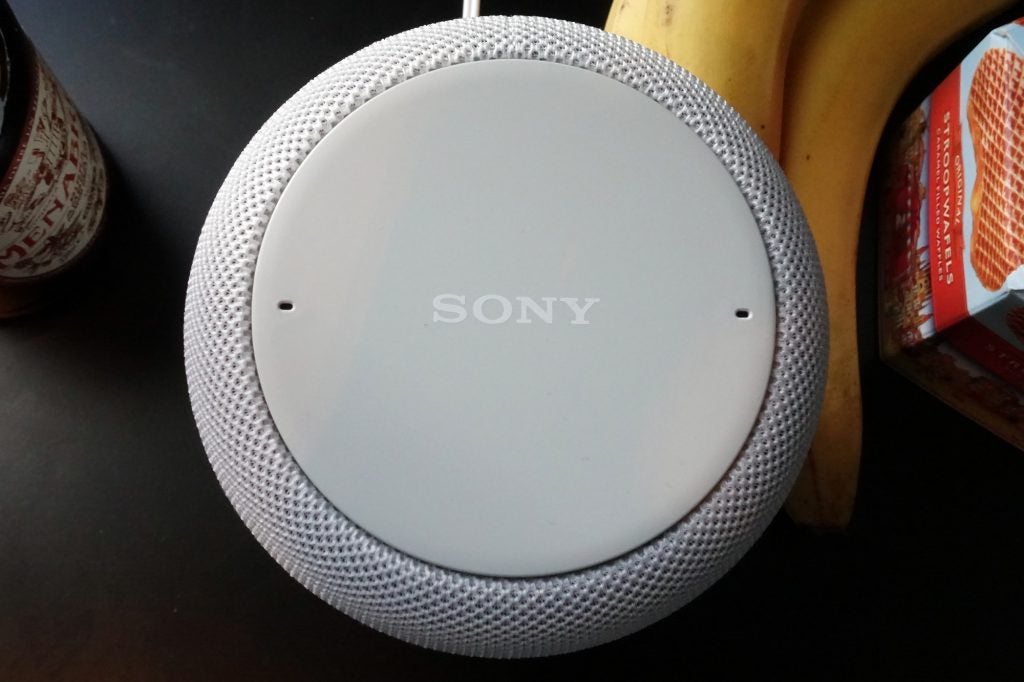 The Sony LF-S50G looks great for a smart speaker. The mesh cover that makes up the majority of the exterior instantly gives it a vibe that’s more furnishing, less machine. The shiny base is on the right side of bling. The clock peeking through the fabric is a useful addition; you can dim it so it doesn’t keep you awake, or turn it off entirely.

I’d say this is easily the most attractive of the smart speakers available. The Amazon Echo is still a bit utilitarian; the Google Home looks like one of those automatic air fresheners; the Sonos One is cool but still boxy; the UE Megablast is most at home in skate parks.

It’s not just pretty, it’s practical too. The speaker is IPX3 rated, which means it is splashproof. The mesh cover is actually a removable shell, which you can rinse under a tap if you’re cooking and somehow get chicken juice all over the speaker.

There’s a hands-free element to reduce the likelihood of that happening. The top surface features a motion sensor. Wave your hand over it, back to front, to summon Google Assistant. Or front to back to play and pause music; left and right to control tracks. Draw circles above the speaker to change volume.

The physical controls are less exciting. There’s a mute button to stop the microphones from listening, plus a pairing button for Bluetooth. If you don’t want to use that, you can also pair by NFC (near-field communication). Sadly, there’s no 3.5mm connection. The only thing you’ll be plugging in is the mains adapter. 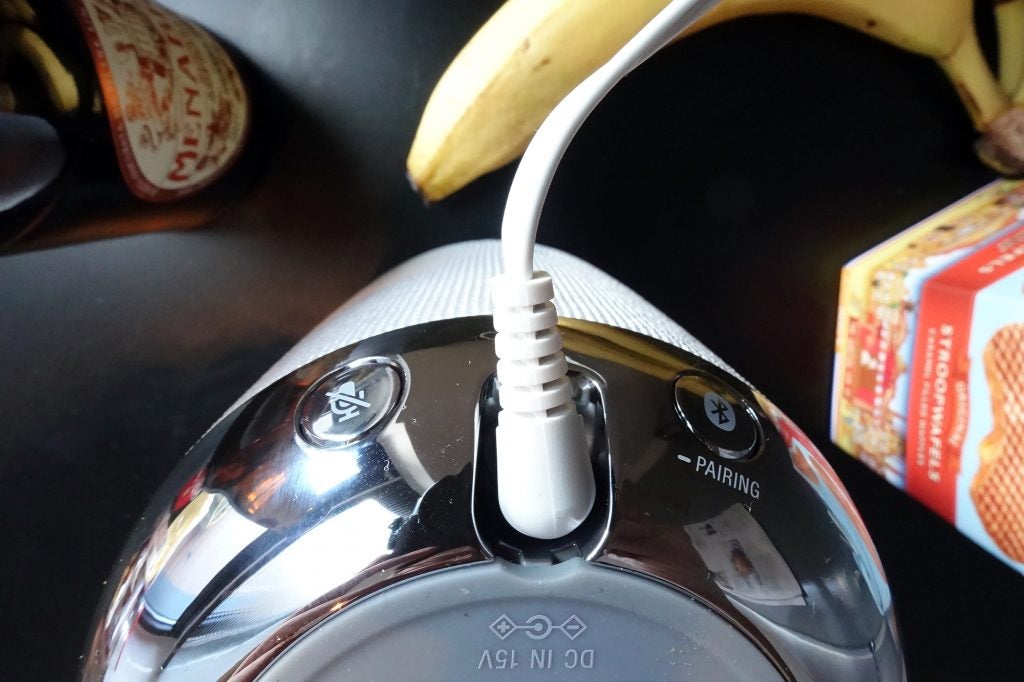 On the audio front, there’s a 48mm speaker driver. This fires upwards into a two-stage diffuser, which aims to create a spacious 360-degree sound. There’s also a 53mm woofer for bass, with a reflex port to aid bass efficiency.

The speaker features Google’s Chromecast system, which means you can set up a multiroom audio network with other Chromecast-equipped audio devices. You can’t connect two speakers in stereo configuration, though – that’s a feature available on the Sonos One and the upcoming Apple HomePod.

You also get limited voice control over Android TVs from Sony and Philips, or any TV with a Chromecast dongle connected. You can tell the speaker to play something on Netflix or YouTube, and it will pop up on screen. You can also use your voice to pause and resume.

Google Assistant can do a lot more than activate Chromecast features, though. It can also control compatible smart devices, such as Nest thermostats and Philips Hue lightbulbs. That’s on top of the basics, such as setting timers and searching Google for trivia. We’ve written extensively about Google Assistant’s features, so check out our detailed explainer: Google Assistant vs Amazon Alexa. 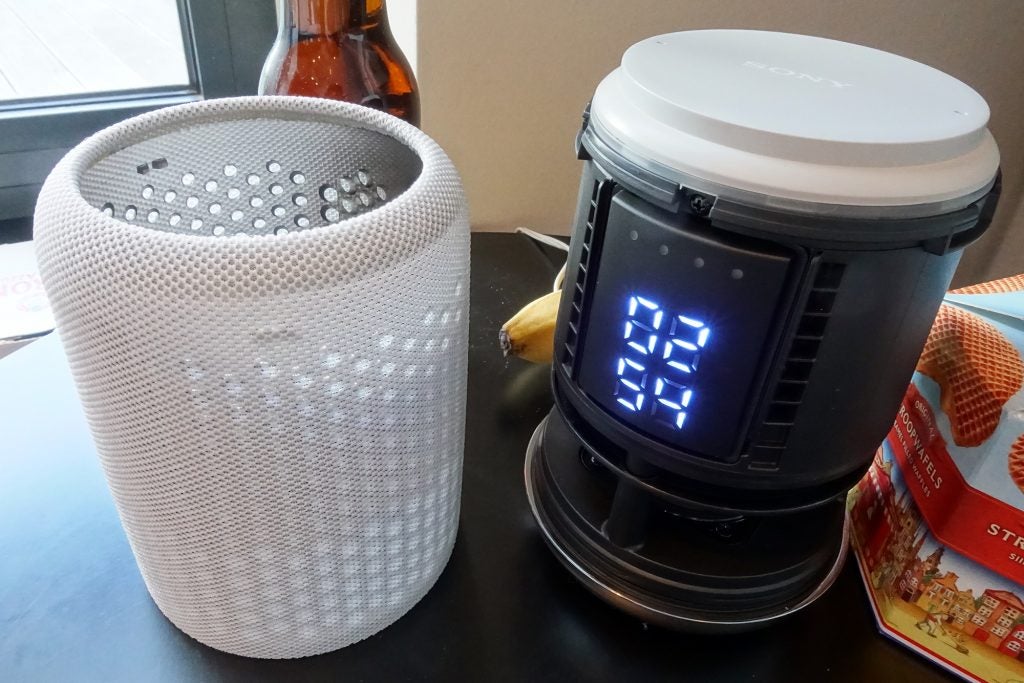 I’ll be honest: the feature that excited me the most was the gesture control. I just love the idea of waving my hand to control things and pretending I’m strong with the Force.

Does the Sony LF-S50G give you that feeling? Not quite. Waving left and right to skip tracks is straightforward enough, but there’s definitely a knack to drawing circles in the air above the speaker to control volume – they’ve got to be small circles.

Even with that in mind, I’d say my Jedi mind tricks worked about 80% of the time. The remaining 20% saw me waving about to no avail and feeling silly. Sometimes I’d get no response no matter how much I adjusted the velocity and trajectory of my hand. If you’re going to offer motion control, the responsiveness needs to be 100% – or at least have some sort of physical control to back it up.

At least shouting “hey Google, shut up!” seems to work. The voice element is as effective here as on the standard Google Home and the little Google Home Mini. I experienced little delay in response, and I rarely had to repeat myself. 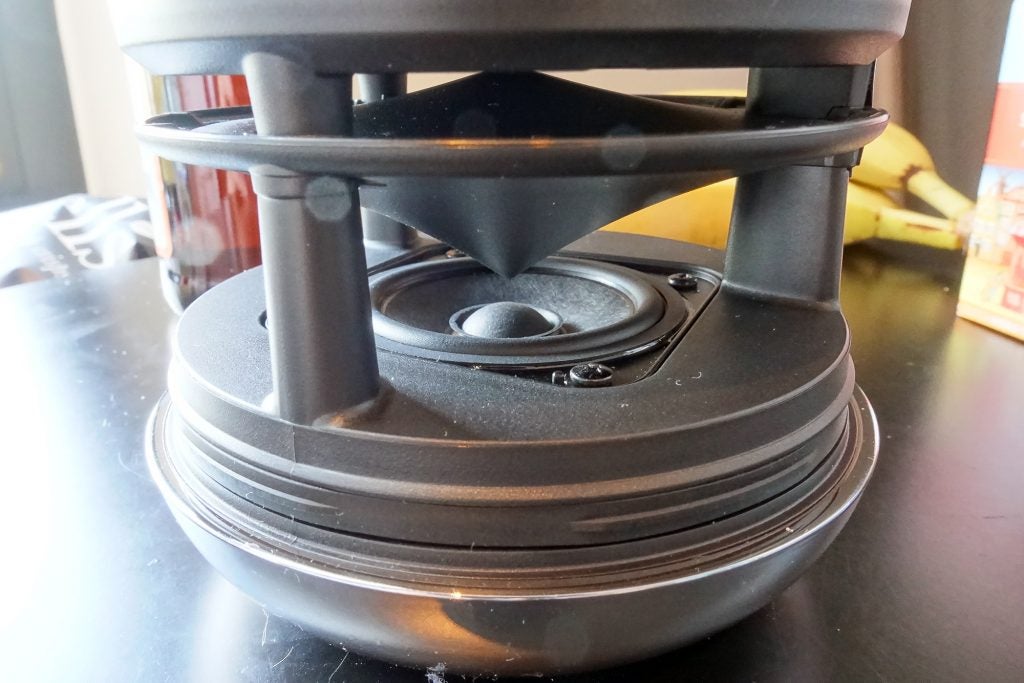 That leaves the audio performance, which is fine but not amazing. The good news is that Sony has achieved its goal of room-filling sound. It’s a spacious performance that sounds a lot bigger than the speaker’s stature might suggest. This is no doubt helped by that 360-degree design. There’s no listening ‘sweet spot’ like you get with traditional speakers, so you’ll hear the same performance no matter where you stand in the room.

There’s a healthy amount of bass, but it’s controlled enough not to come across all muddy. The top end is clear, but maybe it’s a little too crispy, and the midrange feels a little hollow. There’s a slightly hard edge to the sound that makes extended listening sessions a little tiring. That hardness and frailty also stops me from really cranking the volume.

That’s not a problem I have with the Sonos One. In comparison, that sounds a lot more solid and authoritative, yet is smooth enough in its delivery that I could listen for hours on end. Overall, the Sony LF-S50G’s sound is perfectly acceptable for short listens while making dinner – but it falls short of Sony’s generally high audio standards that keep you listening. Still, it sounds than the stock Google Home. 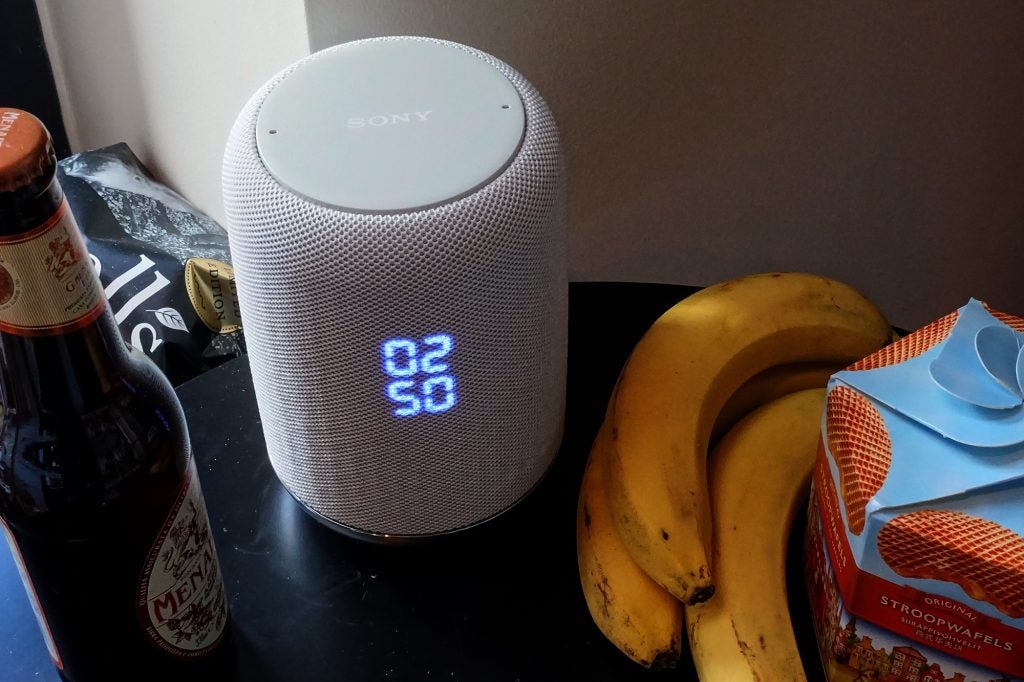 If you want a smart speaker that runs on Google Assistant, and you want something that offers a little more than the Google Home and Google Home Mini, this is currently your only option. And it’s not a bad option, either: it’s the prettiest smart speaker on the market, it has a useful clock display, and its gesture controls are very cool (when they work).

Then again, it’s not the best-sounding smart speaker out there. That honour belongs to the Sonos One. That currently operates on Amazon’s Alexa AI, but it will soon be updated to run Google Assistant as well.

For me, it comes down to price. The Sony LF-S50G’s full retail price of £200 is too steep, considering the Sonos One can be had for £180. But at the time of writing, two major retailers are selling the Sony for £170, and Sony itself has it at £150. That’s a lot more reasonable. If you can find the LF-S50G at that price, I’d recommend giving it a go.

A decent upgrade over the Google Home.