What is the Panasonic GX800?

Panasonic has taken the decision to simplify its line-up, ditching the GF and GM strands (in the UK at least). The GX800 is now the entry-level camera in Panasonic’s arsenal. You can move up the GX line to the GX80 or GX8, if you feel that the GX800 is too basic for you, and likewise you can start with the GX800 if you want something a little more straightforward than its siblings. All clear?

The GX800 features a 16MP Four Thirds sensor, which, as with some of the other Panasonic cameras of late, comes without an optical low-pass filter for increased detail resolution. It’s also got a flip-up LCD screen, but crucially no eye viewfinder (or possibility to attach one). Like all other current Panasonic cameras it features 4K Video and 4K Photo modes. 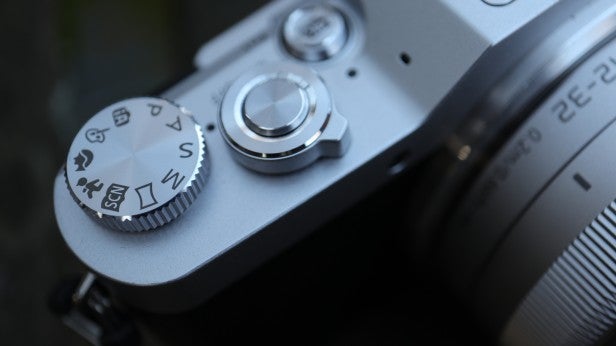 The smallest CSC currently offered by Panasonic, the GX800 is perhaps closer aligned in size to some of the premium compact cameras currently on the market – especially if you’re using it primarily with the retractable 12-32mm kit lens. There will be four different coloured versions of the camera available to buy, but some will be exclusive to certain retailers.

With the lens fully retracted, the camera is small enough to fit in a reasonably large pocket, such as a jacket pocket.

It’s clear from the design and layout of the camera that Panasonic is aiming this at a beginner audience. As such, there’s not an overwhelming array of controls to choose from, which is good news for keeping it simple. The majority of the buttons are grouped on the right-hand side of the camera, meaning you can quickly access everything with your right thumb or forefinger if you’re shooting one-handed.

The top of the camera holds a mode dial for switching between different exposure modes. There’s a range of automatic options here, but anybody who’s a bit more experienced should be pleased to see semi-automatic and manual options also available – this could be a great camera for experimenting and learning with.

There are two special buttons on the top of the camera which take you to two of the most appealing functions of the GX800. There’s a button for accessing the 4K Photo modes. In short, this allows you to extract stills from 4K video, which records at 30fps. That means that for every second something is happening, you will have 30 different shots to choose from – ideal for catching the precise moment or expression for fast-moving subjects, such as pets and kids. 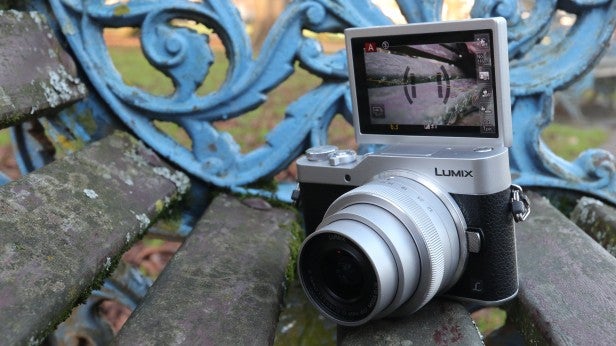 On the other side of the top plate is the Post Focus button. This allows you to take a photo and then change the focus point afterwards in playback. It’s a nifty feature that’s particularly useful for macro and so on, but perhaps not something you’ll use quite as regularly as the 4K Photo modes.

On the back of the camera there’s a small selection of different buttons. A scrolling dial surrounds the four-way navigational pad and can be used to make adjustments to various settings depending on how you’re using the camera. The good news is that many of the buttons can be customised to your preferred way of shooting. A quick menu, accessed via its own button, can also also be customised to add or remove functions as you see fit.

Behind the battery door you’ll find not only the battery, but the memory card slot. That gets special mention because the camera accepts microSD cards, rather than full-sized SD. Annoying for anyone who already has a stack of SD cards lying around, but it’s good news for anybody who’s been using microSDs with their mobile phones. 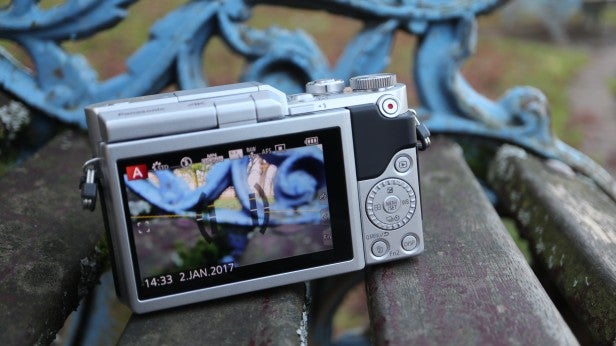 Unlike the other cameras in the GX line-up, the GX800 is not equipped with an eye viewfinder, electronic or otherwise. That’s a shame for anyone who likes to compose using one, but it’s perhaps not surprising to see it omitted from an entry-level model. It’s not possible to add one via a hot shoe or accessories port either, as, well, there isn’t one. If you’re inclined to like eye viewfinders, you’d do well to take a look at the GX80, which sits just above the GX800, but doesn’t currently cost too much more to buy.

The screen is touch-sensitive, and tilts to allow you to face it forward for selfies and the like. The flip goes to the top of the camera, meaning that you’re OK to place the camera on a table or a tripod and take your selfies – particularly useful for group shots.

Via the screen you can also carry out a number of tasks. You can set the autofocus point, you can move through images in playback and you can select things from either the full menu or the quick menu. The screen is nice and responsive, and anybody who’s moving up from a mobile phone should find it a particularly familiar way to work.

Next
Performance, Video and Verdict Review