While the UB150 is similar to the more expensive UB450 in build and look, it isn’t as feature-packed as its more expensive sibling, lacking Dolby Vision and dual HDMI outputs. However, for those on a budget, it’s an affordable 4K player with decent picture quality, but there are more refined efforts in the sub-£200 market.

The DP-UB150 is Panasonic’s entry-level 4K Blu-ray player with support for HDR10+ and Dolby Atmos.

Though the tea leaves are pointing towards a future of (too many) streaming services, there’s still room for affordable physical 4K players, as the Panasonic UB-DP150 attests to.

This is the Japanese company’s entry-level UHD disc spinner, aimed at the thrifty 4K consumer with support for HDR10+, but in making it more affordable there’s no Dolby Vision HDR or room for the HCX processor that’s available on Panasonic’s premium efforts.

So for those who still worship at the altar of physical media, is the DP-UB150 a good way to do so?

In terms of design there’s not much to say about how the DP-UB150 looks. It’s a tidy, compact unit, and at this price you aren’t looking for architectural wonders.

The DP-UB150’s chassis is distinctly utilitarian, with a two-tone finish its most decorative aspect. On the front panel is a USB port and the disc tray, with an eject and power button on the top plate, both of which respond well enough to button pushes. 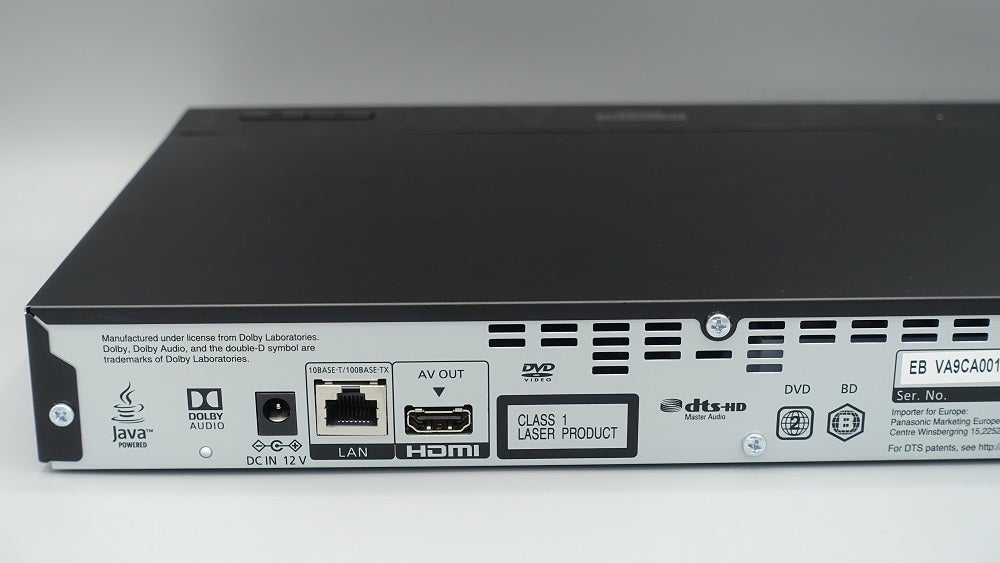 There’s a HDMI connection and an Ethernet port on its rear, as there’s no Wi-Fi

The DP-UB150 has the one HDMI connection on its rear, and an Ethernet port alongside it as there’s no Wi-Fi. It’s perhaps understandable given its budget price, but the lack of Wi-Fi disappoints, and the need to plug in a cable may be an annoyance for AV rack users.

The remote is a small and dinky affair, and those with bigger hands will need think before jabbing at the buttons. It’s fine, if a bit awkward to use. 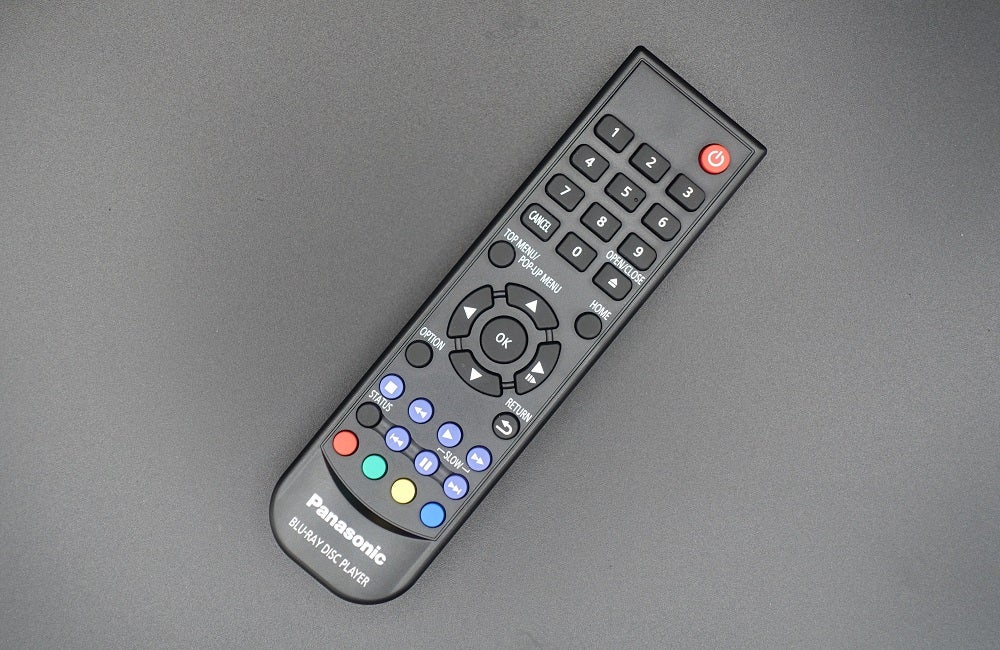 The remote is equally small and tidy, but may prove annoying for those with big hands

Build quality if acceptable for this price, and though the disc drive can be somewhat noisy during operation, it’s perhaps a little less so than the Sony UBP-X700.

It’s an interesting choice considering the number of Dolby Vision discs is still a distance ahead of HDR10+. The step-up DP-UB450 caters for both, which is a decision we wholeheartedly applaud, and while more discs are available in HDR10+, it’s still a relative trickle than a flood. 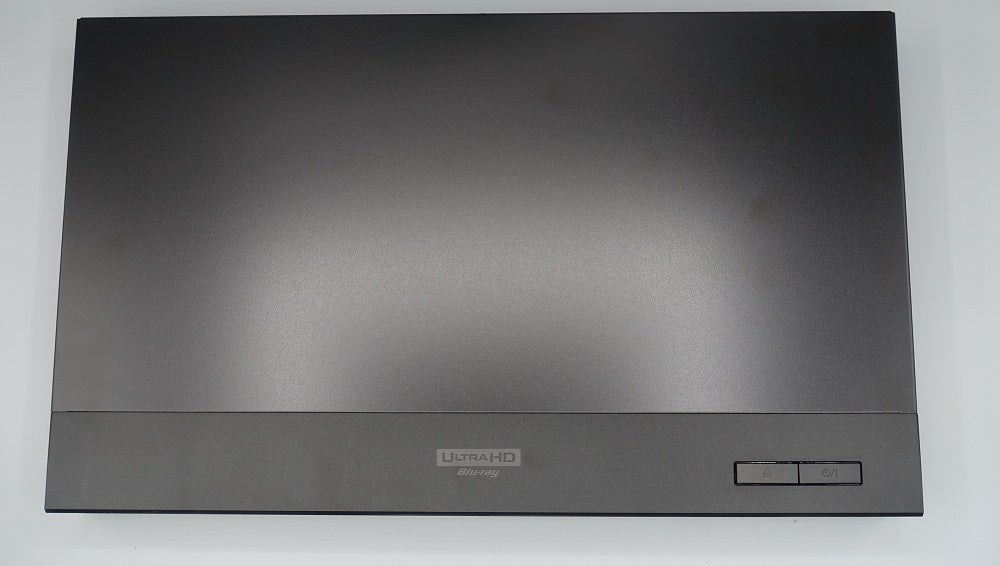 Ultra HD it may be, but there’s no badge for HDR10+

And one of the stranger quirks of choosing HDR10+ is that as it’s fed through as part of the HDR10 metadata signal, there appears to be no way of confirming whether you’re watching content in HDR10+. Dolby Vision has a badge, but that’s not the case with HDR10+.

The DP-UB150 does automatically choose to playback the HDR10+ signal if it’s available. This can be checked by pressing the Options button on the remote to see the playback info.

But, just to add to the overall strangeness of HDR10+, while some discs show up as being in HDR10+, others state HDR despite HDR10+ being enabled and the disc compatible with the format. It’s a curious state of affairs. 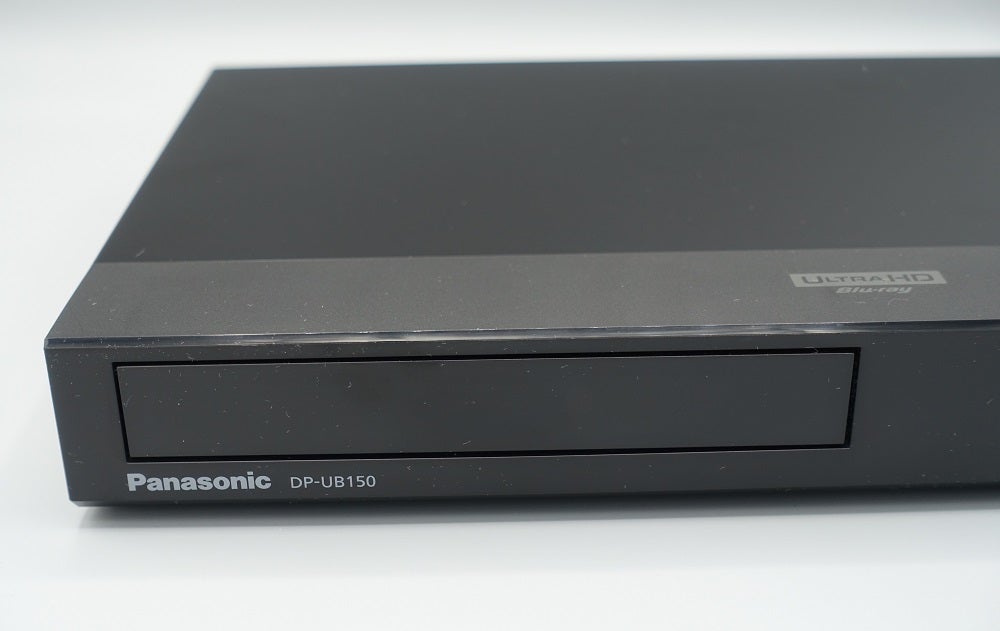 Otherwise, features are thin on the ground as you’d expect from a player focused on affordability. There’s support for Hi-Res Audio and Dolby Atmos passthrough, but the menus and HDR settings are basic, and there’s none of the smart apps you’ll find on more expensive units. The latter are arguably not needed at this price, and it’s reasonable to expect a smart-enabled TV will cover all you need in this respect.

For those still keen on 3D, the DP-UB150 supports the stereoscopic format, so you can clutch onto your 3D discs for a while longer yet.

We began with watching Alita: Battle Angel in HDR10 on a Samsung Q85R, and first impressions are good. The DP-UB150 puts in a cinematic-looking presentation, but on closer inspection, it’s not the most revealing performer.

While the DP-UB150 is capable of bold-looking images, with firm blacks and much deeper and intense colours than seen on the Sony UBP-X700 – the Panasonic does run warmer with complexions flushed and blues and reds pushed up – something that’s especially noticeable in the skin tones of Alita’s face. 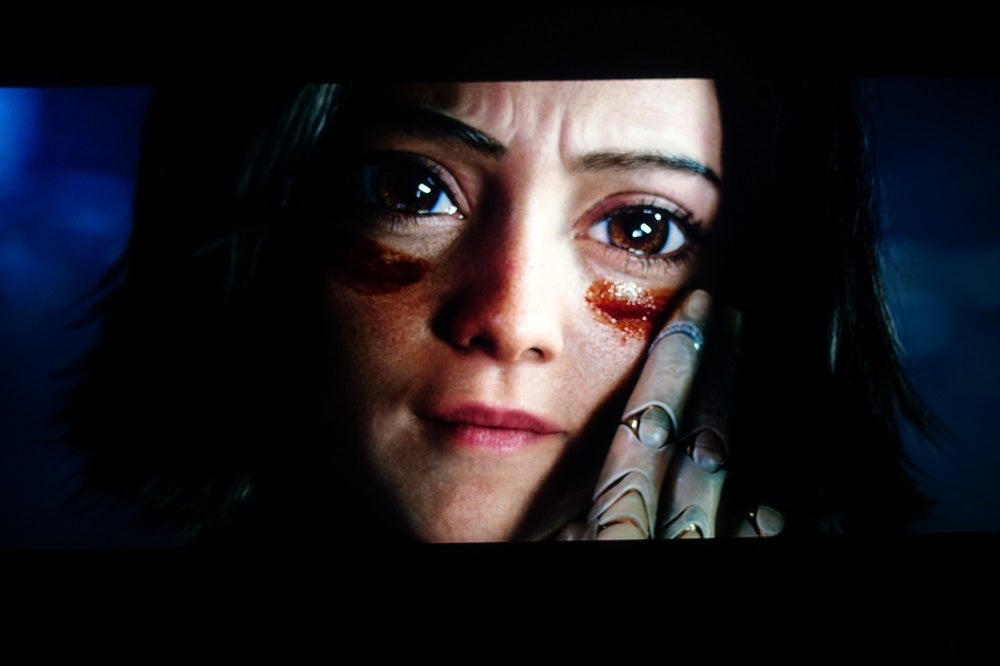 Contrast, brightness, sharpness and colour settings can be adjusted in the menus. You’ll need to switch to User if you want to tone down, or ramp up, these aspects of the picture. 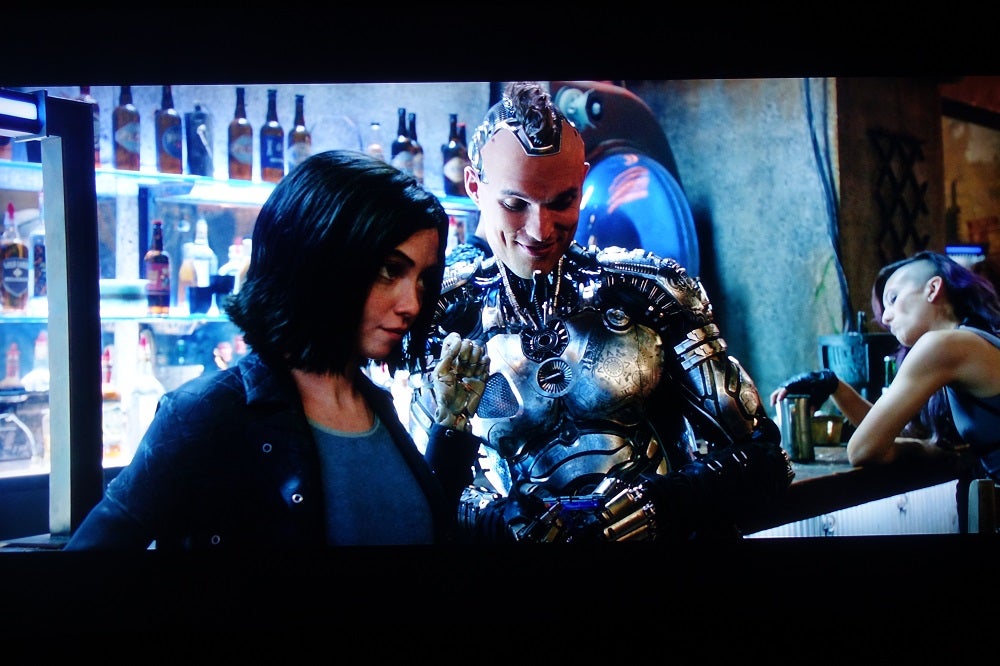 Head to the opening of Alita as Christoph Waltz’s Dyson Ido rummages through a scrapyard of forgotten parts, and the Panasonic lacks the emphasis Sony gives to the golden sun, presenting a dimmer and less dynamic picture. 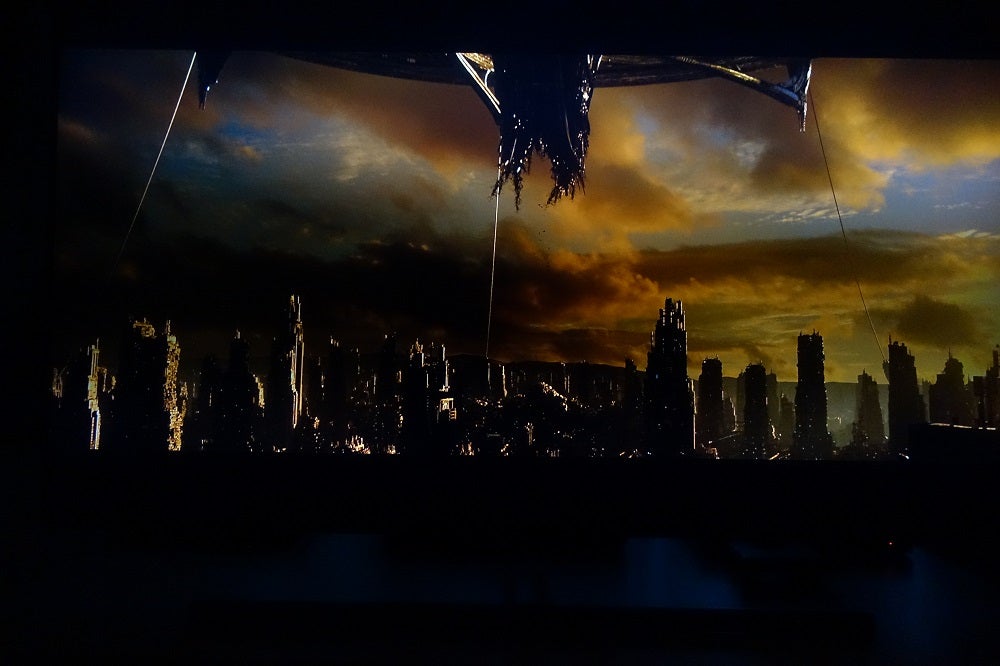 And the Sony betters it not only in terms of detail, but in terms of tone and colour. While the blacks are imperiously strong on the Panasonic, it’s less revealing when it comes to detail and shadow detail, with the saturated nature of the colours on the DP-UB150 more apparent. It’s a more textured image, but as a consequence it’s less natural, subtle and accurate. 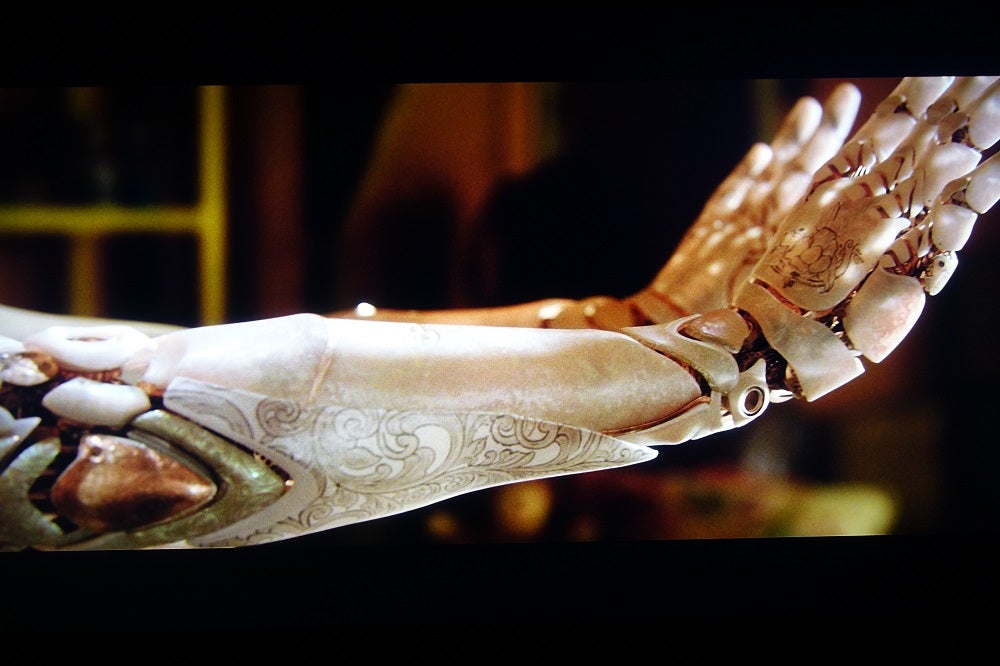 Playing Alita in HDR10+ and it elicits more performance out of the film with a noticeably brighter and more attractive picture. The UB150 is able dig more out of the image, with colours feeling more accurate and the overall darkness of the image lessened. With Panasonic, Philips and Samsung supporting HDR10+ on their TVs, adding the DP-UB150 would be the way to extract performance from a HDR10+ UHD disc. 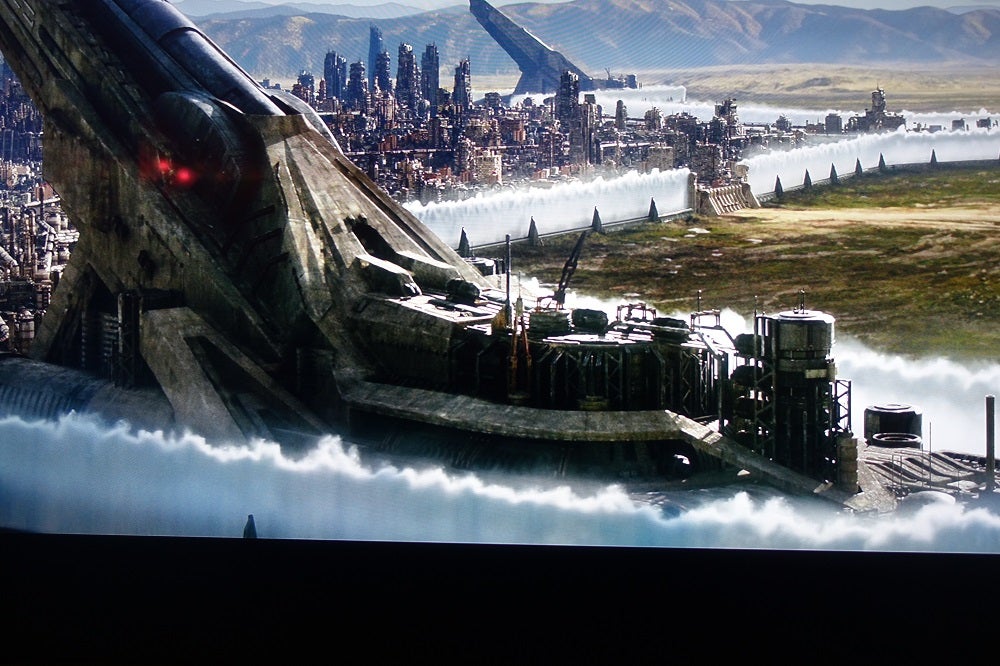 Sonically the Panasonic delivers a big sound, but is less nuance and not as weighty as the Sony. CD playback is fine, with detail and clarity available, along with the ability to handle the quick shifts of tempo in Rush from the Cowboy Bebop soundtrack.

And in terms of upscaling SD and HD content, the DP-UB150’s upscaling abilities are fine. A spin of The Dark Knight DVD and it lacks sharpness, but colours are decent and skin tones aren’t overcooked. A move up to HD and as you’d expect, it’s much better tonally, with good detail and colour accuracy.

If you’re still doggedly sticking to physical media and want an affordable 4K player, the DP-UB150 has its qualities. While there still aren’t a huge amount UHD discs that take advantage of HDR10+, you do get a capable enough player with support for Hi-Res Audio and Dolby Atmos, though for picture quality and features it’s beaten by more expensive efforts.

And one of those more expensive efforts is Panasonic’s own DP-UB450. If you’re willing to add £50 to your budget, it supports both Dolby Vision and HDR10+, has a twin HDMI output (for video and sound). Build quality is similar, as is picture quality, and it also doesn’t carry any support for streaming apps.