What is the Panasonic DMP-BDT360?

The DMP-BDT360 is a midrange Blu-ray player that eschews the frills of the flagship DMP-BDT700 and step-up DMP-BDT460 to hit a wallet-friendly price, while offering a better spec than the cheaper DMP-BDT260, DMP-BDT160 and DMP-BD81.

Among its features are built-in Wi-Fi and internet apps, which make this player an inexpensive way of bringing smart content to an older TV, alongside eye-popping hi-def movie playback of course. Panasonic’s players have always offered superb performance and functionality, but in terms of smart content they’ve played second fiddle to Samsung, Sony and LG for some time – let’s see if the DMP-BDT360 redresses the balance.

The DMP-BDT360 is an attractive machine, spruced up with curved corners and an understated black finish. The top panel feels plasticky but sports a lovely brushed texture, while the front flap keeps all the clutter hidden for a clean, minimal look. Build quality is on the lightweight side but slightly better than most decks at this price. 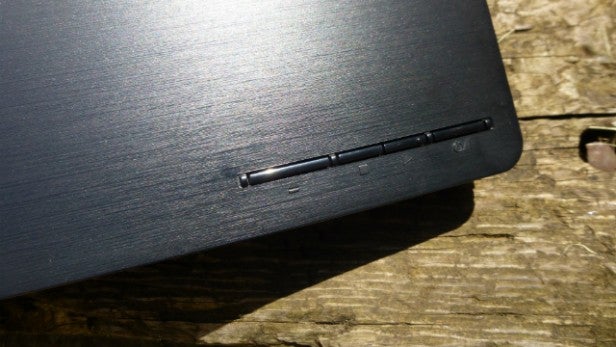 Pull down the flap and you’ll find a pair of USB ports, which allow you to play media files from flash drives and external HDDs (FAT32 and NTFS), alongside a disc tray and LED display – the latter is missing from the cheaper DMP-BDT260.

The rear panel bears a typical budget socket selection, namely an HDMI output, optical digital output and Ethernet port. If you’re after dual HDMIs or analogue audio outputs then the top-end DMP-BDT700 is the deck for you.

The DMP-BDT360 is a 3D-ready player and also upscales movies to 4K if you have a compatible TV. Naturally all the key audio formats are supported, including Dolby True HD and DTS HD Master Audio decoding and bitstream output.

There are some gems in there – iPlayer and Netflix particularly – but do an A-B comparison with Samsung’s BD-H6500, which offers ITV Player and 4OD, or the LG BP645 and its exclusive inclusion of Now TV and Spotify, and the Panasonic’s selection is nowhere near as compelling.

However, you can access your own music, video and photo files stored on PCs and NAS drives thanks to the deck’s DLNA support. It’ll play MKV, XviD, AVCHD, MP4 JPEG, MP3, FLAC, AAC, WMA and LPCM, all of which can be played via USB too.

Rounding up this appealing feature list is Miracast, which uses Wi-Fi Direct to replicate your smartphone’s screen on your TV. It’s handy for playing games or watching videos, neither of which are ideal on a tiny screen.

In most areas the DMP-BDT360 is a joy to use. The Home screen is particularly good, using the same crisp, colourful graphics and intuitive layout as Panasonic’s previous players. A series of tiles representing the different submenus is arranged into a cross that corresponds to the direction pad on the remote. 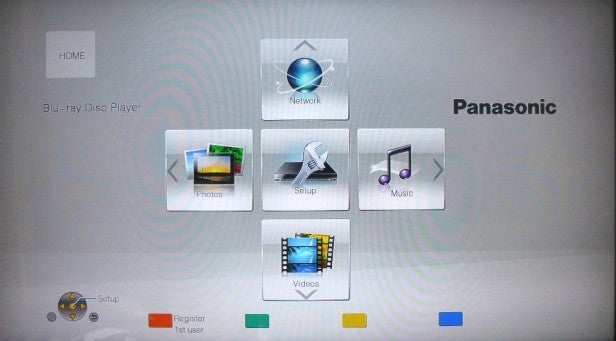 Press the relevant key and you jump straight to that menu, as opposed to the usual process of moving the cursor and hitting enter. It’s a minor thing but makes navigation much quicker and easy than most Blu-ray decks.

And in other areas the menu presentation is top-drawer – the superimposed Options menu uses crisp fonts and bright graphics, while the Settings menu’s tidy arrangement makes it easy to configure, particularly when it comes to network setup.

But the deck gets it wrong in places too. The DLNA menu’s basic grey/yellow colour combo is uninspiring, and it’s not particularly slick either. When streaming music from a Windows 7 laptop, the BDT360 listed our 16,000-or-so tracks over a series of pages, but there was a frustrating pause when moving from one page to another, so it took ages to find the track we wanted.

It also froze a few times when loading a track and played HD videos in SD resolution. You may well have better luck with your own system but for us it was not an enjoyable experience and we didn’t have these problems with rival players from Samsung and LG.

Also disappointing is that the DMP-BDT360 uses the same menu for its internet content as last year, which clumsily splits apps across several pages and is a little slow to respond. Ironically the cheaper DMP-BDT260 has switched over to a new simpler layout, which makes it much easier to find the app you want.

However on a brighter note the remote is up to Panasonic’s usual excellent standards, using large rubber buttons and clear labelling to great effect. The buttons are helpfully split into sections and the careful layout lets you navigate with minimal hassle. Just one niggle to report – the Netflix button is placed too near the ‘up’ button on the remote, so it’s quite easy to press it accidentally, which can be extremely irritating.

Panasonic has a long tradition of top-drawer Blu-ray picture quality and the DMP-BDT360 does nothing to tarnish that. The deck reproduces exactly what’s on the disc with no glitches, dodgy colours or motion tracking issues – just eye-popping movie visuals that pull you right into the screen.

We loaded up The Amazing Spider-Man on Blu-ray and were entranced by the level of detail in the picture – the textures and shapes in Spidey’s suit are clear and stable, plus it picks out every pixel of the (dodgy) Lizard CGI. We’re also fans of the deck’s shadow detail – you don’t miss anything when Spidey hits the streets at night.

These stunningly crisp images are backed up by well-judged contrast that keeps blacks deep and punchy, while bright colours like Spider-Man’s iconic red suit blaze from the screen. This beautifully handled palette is helped by smooth tonal blends, a lack of messy artefacts and natural skin tones.

When playing 3D Blu-ray discs, the deck offers more of this crisp detail and natural colours while keeping strict control over the fast-moving, layered 3D objects. Simply put, the DMP-BDT360 does nothing to stand in the way of your 3D viewing experience.

If you feel its pictures aren’t quite up to par, you can adjust the basic parameters by delving into the Options menu and selecting the User preset. Here you can tweak the brightness, contrast, sharpness and colour levels. There are also Normal, Soft and Fine presets.

Silicon Optix’ HQV Blu-ray test disc proved meat and drink to the DMP-BDT360, aside from a touch of flicker on the vertically-striped boxes of the ‘Film Resolution Loss’ test. It loads discs in reasonably quick time too, taking 29 seconds to fire up our Java-heavy Terminator Salvation yardstick, although Samsung’s BD-H6500 does it some ten seconds faster.

Should I buy the Panasonic DMP-BDT360?

The DMP-BDT360 is an impressive Blu-ray player in many ways, but faced with a choice between this and the similarly-priced LG BP645, Samsung BD-H6500 or Sony BDP-S5200 we’d probably give the Panasonic a miss.

What it comes down to is internet content and streaming performance – we think the other three decks boast a better line-up, particularly Samsung and LG which add ITV Player/4OD and Now TV/Spotify respectively.  We also found the BDT360’s DLNA performance a little frustrating.

However, if you’re simply looking for a solid player with a slick menu system, two USB ports and the ability to handle good old-fashioned Blu-ray discs really, really well, then you certainly won’t be disappointed by the DMP-BDT360.

An attractive, feature-packed Blu-ray deck that does the basics brilliantly, but similarly-priced rivals offer better internet content and streaming performance.