It’s compact in size but big on features, equipped with built-in ‘super’ Wi-Fi, DLNA streaming and access to the Sony Entertainment Network – oh, and 3D Blu-ray playback of course.

The BDP-S5200 continues Sony’s ‘Sense of Quartz’ design theme of previous ranges, which looks immensely stylish. It’s mostly gloss-black with a series of several sloping triangular panels on top, but this time the front panel is mirrored, giving it a more glamorous appearance than its predecessors.

In the corner of the mirrored panel are power and open/close buttons, while the front of the player sports a USB port and a skinny disc tray. Interestingly there’s no readout on the front, so you’ll have to rely on the onscreen displays.

The other distinctive aspect of the BDP-S5200 is its size – at just 265mm it’s half the width of most Blu-ray players, making it ideal for placing in the bedroom where space is limited. Sadly, like most budget Blu-ray players, build quality is a let-down – the light, insubstantial plastic casing doesn’t inspire confidence in its long term durability.

On the back is a typically sparse selection of sockets, but that’s par for the course on a budget deck. You get an HDMI output, a coaxial digital audio output and an Ethernet port for hooking up to the internet. That should suffice for most people, but if you want dual HDMI output or analogue audio ports then you’ll need to invest in a more expensive player.

It also features what Sony calls ‘super Wi-Fi’, which means it’s been engineered to have a stronger signal than conventional Wi-Fi, hopefully resulting in smoother streaming and more responsive web browsing.

Hook it up to the internet and you can access the Sony Entertainment Network, which includes a wealth of video, music and on-demand movie apps. The line-up is excellent – on the video side, there’s Amazon Instant Video, Netflix and Sony’s Video Unlimited service, plus You Tube, BBC iPlayer, Demand 5, BBC News, BBC Sport, Sky News and lots of niche services. It’s a shame ITV Player and 4OD haven’t made their way onto Sony’s players – if you want those you’ll need to check out the Samsung BD-H6500.

You can also stream your own music, video and photos from PCs and other devices on your home network. Supported formats include MKV, AVI, XviD, WMV, AVCHD, MP3, WMA and LPCM, but no DivX. You can’t stream FLAC or AAC over a network but you can play them via USB. JPEG, PNG and GIF photos can also be streamed.

The deck also supports Miracast screen mirroring technology, which allows you to display the screen of a compatible mobile device on your TV over a peer-to-peer Wi-Fi connection. Gracenote automatically downloads data about movies and songs. 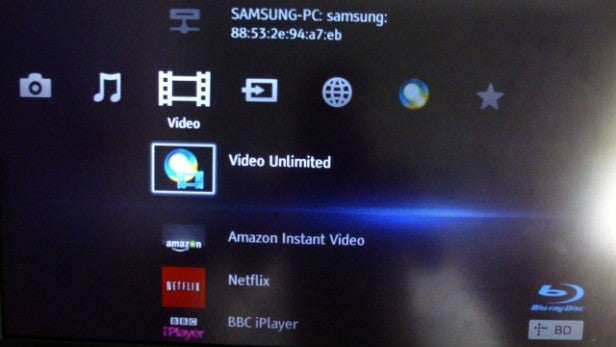 The BDP-S5200 employs the same Xross
Media Bar home menu used by last year’s players and several generations
before it. We love this slick, intuitive interface but we were hoping
for a new look just to freshen things up and bring it more in line with
Sony’s flashy BRAVIA TV menus.

Still,
you can understand Sony’s reluctance to change it. It’s instantly
useable and makes it easy to find the option you need. The menu features
two intersecting axes, with the categories running horizontally and the
corresponding options listed vertically. Press the direction keys and
it skates between options quickly. Every app is illustrated by an icon,
which makes it easy on the eye. The setup menu is found at the far end
of the bar and covers every angle.

The same style of menu is used
when exploring networked devices or USB drives. It slides from left to
right and when you find your content it’s listed alongside artwork and
file details. We had no trouble using it. What’s more, the Wi-Fi
connection is strong and stable, ensuring smooth, uninterrupted video
streaming as promised.

During
disc playback you can access the Options menu, which slides in from the
right of the screen. As well as a range of disc playback options,
there’s a range of video settings, including three presets – Standard,
Brighter Room and Theatre Room, plus block and mosquito noise reduction.

The
remote is standard Sony fare, with a compact size and good quality
rubber buttons. The large direction pad is perfectly placed for the
thumb, with buttons for the Home menu, SEN and Netflix below it. All the
keys are clearly marked too.

Alternatively you can control the
BDP-S5200 using Sony’s superb TV SideView app, available for iOS and
Android devices. It offers a virtual remote, a swipe pad and a Free
Cursor screen for controlling the onscreen web browser, plus you can
launch Sony Entertainment Network apps and use the keyboard to type text
onscreen.

In terms of picture
performance, the BDP-S5200 does a fine job. It pulls all the pixels off
the Blu-ray disc and puts them onscreen, and you can’t ask for more than
that. The resulting images are crisp, vibrant and devoid of noise,
whether you’re watching in 2D or 3D.

We loaded up Children of Men
and its super-detailed visuals look stunning. As Theo walks down Oxford
Street in the opening scene, the signs and shop fronts are sharply
rendered. It’s a busy shot, with lots of small moving objects moving
across the screen, and the player tracks them all smoothly.

The
movie’s gloomy, muted colours are expertly judged, picking out and
blending all the subtle shades of grey. The few bursts of bright colour,
such as the browns and greens of the woodland surrounding Jasper’s
home, are richly saturated but stay the right side of lurid.

We
also ran the Silicon Optix HQV disc and the Sony aced practically every
test. On the Jaggies test, diagonal moving lines are crisp and free from
feathering, while the SMPTE pattern of the Video Resolution Loss test
looks sharp and steady. The Film Resolution Loss test is the one that
usually catches out lesser Blu-ray decks but to its credit the S5200
displays it with minimal strobing. The camera pan across a football
stadium is remarkably smooth and stable.

Disc loading is fairly
quick too. It took 33 seconds to load up our trusty Terminator Salvation
disc, and just 15 for Children of Men.

The
BDP-S5200 is a highly impressive budget Blu-ray player, which delivers a
knockout combo of stylish design, generous features and striking
pictures – all for an attractive price.

The deck’s lightweight
build quality and the absence of catch-up TV apps found on Samsung’s
players are the only real negatives – in every other respect the
BDP-S5200 is a Blu-ray deck you can buy with absolute confidence.