The BP645 is a budget Blu-ray player that sits towards the top of LG’s current range. It’s not quite top dog – that status goes to the £250 BP740, which adds 4K upscaling and a Magic Remote – but the second-in-command BP645 still offers a similarly juicy set of features, including smart TV content, DLNA file streaming and screen mirroring.

Although unlikely to make any jaws drop, the BP645 is a tasteful Blu-ray deck, dolled up in a glossy black finish that gleams and glimmers under the lights. The curved corners and brushed top panel lend a touch of elegance, while the minimal fascia keeps everything nice and discreet.

Build quality is perfectly acceptable for a budget deck, but the plasticky fittings and light, hollow casing don’t exactly fill us with confidence.

On the front panel you’ll find a bright green LED readout, a USB port behind a flap and a row of hard buttons that cleverly look like touch-sensitive controls. These control power, play, stop and eject.

The rear panel is typically sparse for a budget player. It comprises just three sockets – an HDMI v1.4a output, optical digital output and an Ethernet port, the latter providing an alternative to the built-in Wi-Fi as a means of connecting to the internet.

Aside from 4K upscaling (which is arguably unnecessary given that 4K TVs do it for you anyway) the BP645 offers everything you could possibly need from a Blu-ray player.

Many people buy budget players as a way of accessing smart content in a second room as well as playing Blu-ray discs, and the BD645 is a perfect candidate for that role thanks to its impressive range of internet content.

The stand-out apps are Spotify and Sky’s Now TV, which aren’t currently found on anyone else’s players, and their inclusion might be enough to lure buyers away from Samsung and its monopoly on 4OD and ITV Player.

That said, we think Samsung still has the edge here, as free catch-up TV is a more attractive proposition – both Spotify and Now TV require a subscription fee.

These services are joined in LG’s ‘Premium’ selection by BBC iPlayer, Amazon Instant Video, Netflix, Blinkbox and YouTube. There’s a separate LG Smart World section that offers a diverse range of second-tier apps, games and puzzles, all of which require you to register with LG.

Allied to this excellent internet content is SmartShare DLNA streaming, which allows you to access PCs, NAS drives and other devices on your home network. It plays MP3, WMA, AAC, WAV, FLAC, MKV, AVCHD, AVI, WMV and DivX, all of which can also be played via USB.

The BP645 also offers Wi-Fi Direct and Miracast screen mirroring, plus the Private Sound Mode 2.0 which beams audio from this player to a smartphone or tablet so you can listen on headphones. There’s no 4K upscaling but the deck is perfectly at home with 3D Blu-ray, plus there’s support for HD audio formats (decoding and bitstream output).

The BP645’s onscreen presentation is outstanding. Fire it up and you’re greeted by an engaging main menu covered in bright colours and cartoony graphics. A row of large tiles runs through the middle, allowing you to access Smart Share, Premium, Smart World, My Apps (where you find all your downloaded content) and Settings. It may not be as fast or intuitive as Panasonic’s menu system, but the spacious layout and clear labelling eradicate confusion. 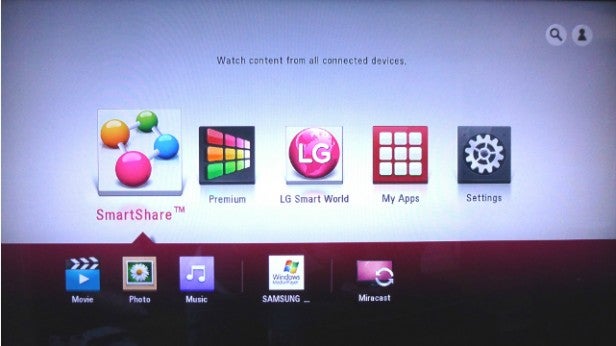 At the bottom of the screen is a banner that changes to reflect what’s selected above. So when you select SmartShare, you’ll see Movie, Music and Photo options and any detected DLNA servers, while Premium picks out a selection of apps.

The Premium menu itself features a grid of massive logos for the internet apps, all superimposed over an eye-catching backdrop of a park. It’s a bit OTT but injects a sense of fun missing from many menu systems. The Smart World menu is equally clever, placing the apps on different shelves.

What’s more, the BP645’s DLNA performance is the best we’ve encountered on any budget Blu-ray deck. It’s not fussy about formats, happily playing any video we threw at it (in the correct resolution too, unlike some players that downgrade HD files to fuzzy SD), plus the menu structure is easy to follow and files start playing almost instantly.

The remote is also terrific. Its compact size allows it to fit snugly in the palm, while thoughtful button placement allows you to navigate without looking most of the time. The disc playback buttons handily glow in the dark and the direction pad is conveniently placed for the thumb, with no clumsily-placed buttons that you could press accidentally.

That said, our commands often failed to register first time, which meant we had to press the button again more firmly. Also the online apps take a while to load, which can be a little frustrating.

The BP645 boots up in seconds, but Blu-ray disc loading is a little slower than some of its rivals. It took 37 seconds to digest the Java content of Terminator Salvation and start playing the Sony Pictures sting – Samsung’s latest deck does it in closer to 20.

But once your disc is up and running, it processes the digital data flawlessly, resulting in stunning pictures on your TV screen. With Star Trek Into Darkness, the images are dazzlingly sharp and detailed, making the movie’s array of interplanetary vistas look amazing, while facial close-ups reveal intimate details like pockmarks and wrinkles.

We can’t fault the deck’s colours either, bringing out the deep reds of the planet Nibiru while making tonal blends and shading look smooth and natural. Motion is smooth and edges are crisply drawn. There are no glitches or imbalances, just pure, natural-looking pictures whether you’re viewing in 2D or 3D.

If you feel the picture needs tweaking then there’s a range of built-in adjustments, which you can access while the movie plays by hitting the Info/Menu button on the remote. They include Standard, Vivid and Movie presets, plus a User setting that lets you alter the levels of contrast, colour, brightness and sharpness in the image. We stuck with Standard.

The BP645 is an excellent all-round Blu-ray player and well worth £100 of anyone’s cash. With a superb array of internet content – which uniquely includes Spotify and Now TV – plus a stylish operating system, fast DLNA performance and an eye-catching feature list, it’s certainly the closest any brand has come to challenging Samsung’s brilliant Blu-ray decks.

That said, Samsung’s BD-H6500 offers ITV Player, 4OD and Demand 5, three free catch-up TV services that might be more appealing than the subscription services offered here. And unlike the LG, Samsung’s deck also offers 4K upscaling, but this is by no means a deal-breaker. So which one you buy really comes down to the sort of web content you’re after, but in our eyes Samsung still nicks it.

A solid, stylish all-rounder with alluring features, Spotify, Now TV and a top-drawer operating system, but fans of free catch-up TV might still be swayed by the Samsung.

Next, read our Samsung BD-H6500 Review