What is the Panasonic DMP-BDT260?

Panasonic’s latest budget Blu-ray player offers a cost-effective way of bringing hi-def movie playback and online content into your living room or bedroom. It does everything you’d expect from a Blu-ray deck, such as playing 3D discs, CDs and DVDs, but with built-in Wi-Fi you can also stream video content from a few online services and play your own media over a network.

The DMP-BDT260 is one of six new players in the range, offering a better spec than the entry-level DMP-BD81 and DMP-BDT160, neither of which offer Wi-Fi. Above it are the DMP-BDT360, DMP-BDT460 and the flagship DMP-BDT700.

Budget Blu-ray players aren’t usually known for their looks, but as we’ve seen from the Sony BDP-S5200 and now the DMP-BDT260, manufacturers are putting more effort in these days. Panasonic’s deck features a striking brushed silver top panel, which contrasts nicely with the gloss black side panels. Panasonic calls this a Multi-directional Visual Design, which means you get the benefit of the elegant styling no matter where you’re sitting.

It’s slim and relatively compact too, measuring 312mm wide by 44mm high, and the curved corners are a nice touch.

Predictably though, the deck’s build quality isn’t particularly impressive. The silver top panel has a cheap plasticky feel and it’s so light we’re worried it might float away. To be fair though, lightweight build quality is par for the course at this price so it would be churlish to judge it too harshly.

On the front of the player is a USB port that allows you to play media from external HDDs storage devices and a red LED that glows when switched on. There’s no display panel, so if you want to find out disc running times and the like you’ll need to hit the Status button and view it onscreen.

On the back are even fewer sockets than the Sony BDP-S5200. There’s a 3D-capable HDMI output and an Ethernet port, which is handy if you prefer a wired internet connection. The unusual lack of digital audio outputs means you’ll need a receiver with HDMI sockets if you want to enjoy multichannel sound.

The DMP-BDT260’s feature list is headlined by a range of ‘Internet Apps’, which Panasonic is no longer calling Viera Connect. Being one of Panasonic’s lower-priced decks, the BDT260 offers a ‘simple’ array of apps, whereas the DMP-BDT360, 460 and 700 bring you a wider selection. It’s a shame Panasonic makes this distinction, given that Samsung and Sony offer the same content across the range.

It’s not a bad selection though. There’s BBC iPlayer, Netflix, YouTube, Picasa, Facebook, Twitter, BBC News and BBC Sport. This is a case of quality over quantity, although ITV Player and 4oD would have made it even better.

Elsewhere the DMP-BDT260 offers decoding and bitstream output of Dolby True HD and DTS HD Master Audio, plus a multi-user mode that lets different people tweak the look of the Home menu. If you’re after Miracast (screen mirroring) and 4K upscaling, you’ll have to step up to the DMP-BDT360. 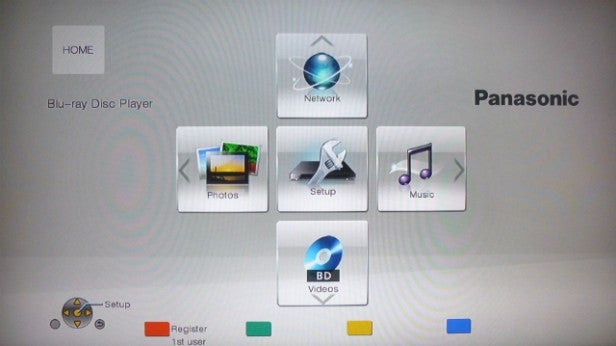 Like Sony, Panasonic has taken
an ‘if it ain’t broke’ approach to the main menu, sticking with the same
layout as the past few generations. A series of tiles arranged in a
cross corresponds with the direction pad on the remote, and a single
press of the up, down, left or right keys takes you to the relevant
function. The subsequent menus carry on like this until you reach your
destination. It’s quick and easy to follow, plus the colourful graphics
and crisp, modern text make it easy on the eye.

When
browsing DLNA menus or USB content, the displays are drab and
simplistic – large blocks of yellow on top of grey backgrounds – but
they get the job done. They’re slow and uncooperative in places though,
particularly when scrolling through pages of music tracks, for instance.
It’s also disappointing that our hi-def videos would only play in SD,
and often froze when we tried to fast-forward them. 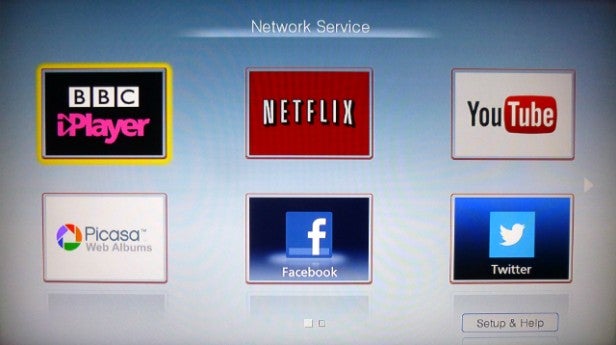 Panasonic
has also revamped its internet content portal, ditching the clunky
multi-layer Viera Connect menu for a grid of large tiles. It’s much
easier to navigate and easier on the eye. This is only the ‘simple’
version though – we’ll check out the full Internet Apps menu when we
review the DMP-BDT360.

Hit
the Options button while a disc is playing and a menu is superimposed
over the picture, offering a range of disc navigation tools and picture
adjustments.

The
remote sticks to the usual Panasonic blueprint, which means chunky
rubber keys, foolproof labelling and an intuitive layout. The only flaw
is that the Home and Netflix buttons are placed too close to the
direction keys, and when you’re navigating without looking it’s very
easy to press it accidentally.

The
DMP-BDT260 does a faultless job of pulling pixels off a Blu-ray disc,
resulting in stunning hi-def picture quality on your TV. The Desolation
of Smaug disc looks resplendent, bursting with crisp CG detail and
natural looking colours.

Bright outdoor scenes obviously bring
the biggest wow factor – when Bilbo climbs the tree and looks across at
Lake Town, the clarity and colour subtlety in the scenery is eye-popping
– but the deck also picks out all the shadow detail and shades of black
in the gloomy surroundings of Dol Guldur.

If the picture isn’t
quite to your taste, there’s a range of adjustments in the Options menu.
These include three presets – Normal, Soft and Fine – and a User mode
that lets you adjust the levels of contrast, brightness, sharpness and
colour. You can even fiddle with 3D pictures, with a distance setting
that affects depth perception.

Moving onto the Silicon Optix HQV
disc, the DMP-BDT260 displays the torture tests with admirable
stability. There’s some flickering in the vertical striped boxes of the
Film Resolution Loss test, but the jaggies and Video Resolution Loss
tests look solid and stable, which suggests there’s some decent video
processing at play, despite its budget price tag.

Should I buy the Panasonic DMP-BDT260?

The
DMP-BDT260 is a solid Blu-ray player that ticks most of the boxes, but
overall it falls short of the quality shown by the similarly-priced Sony BDP-S5200 and Samsung BD-H6500. DLNA performance is sluggish, plus internet content and features are limited compared with the Sony and Samsung.

However,
it does offer sparkling picture quality, a slick menu system and
stylish looks. So if you’re after a Blu-ray deck for the bedroom or
living room the DMP-BDT260 is a decent purchase, but you can get more
for your money – it might also be worth waiting to see what Panasonic’s
step-up players have in store.

A
likeable Blu-ray player with some pleasing features and eye-catching
looks, but similarly-priced rivals offer a bit more for your money.