One one level, Panasonic’s OLED showing at CES 2015 is humble to say the least. For instance, while LG’s stand greets you with a huge three-tier wall of OLED showboating, Panasonic’s 65-inch OLED TV is modestly tucked all on its lonesome in the middle of much more aggressively promoted LCD models.

Also, this 65-inch model is the only OLED TV in Panasonic’s 2015 TV range, whereas LG is now boasting about having 10 different models with a variety of feature options for consumers to choose from.

While LG is confident it will be rolling out most of its OLED TVs by March, meanwhile, Panasonic will say nothing more concrete on its own OLED offering than that is should be available ‘by the end of the year’.

Despite all this, Panasonic’s OLED TV is a prime contender for the best TV at this year’s CES, for the simple reason that its picture quality looks downright amazing. 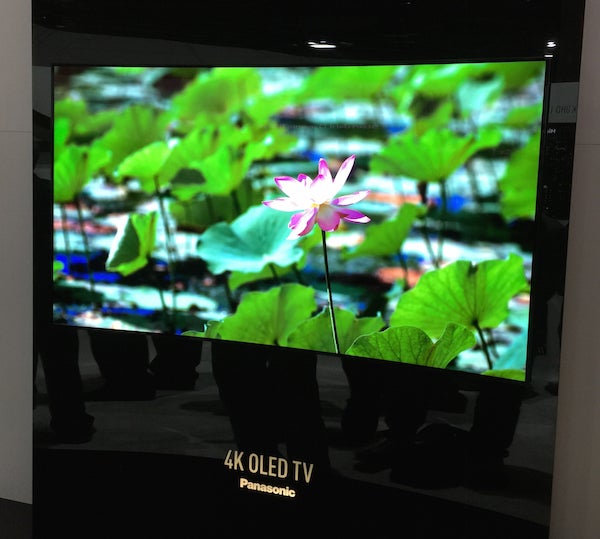 This quality begins, as we’d expect, with its black-level response. Panasonic has got its OLED screen mounted in a jet black ‘monolith’ artificial wall, and whenever the demo reel content contains almost completely black content it’s almost impossible to see where the screen ends and the black wall starts. Basically black just looks black, with no hint of the greyness associated with LCD technology.

Rather more unexpected for OLED, though, is how bright the Panasonic OLED looks. Bright colours and bold whites enjoy a level of pop that grabs your attention and holds it, despite the intense lighting of the CES booth and the presence all around of supposedly much brighter LCD TVs.

Some of the perceived colour vibrancy and brightness punch could be a side effect of the intense black-level response, of course, rather than a definite sign that the Panasonic OLED really is running unusually brightly – this is a common phenomenon with OLED technology. But we’ve seen enough OLED TVs now to feel that this isn’t the whole story; it really does feel as if somehow Panasonic is eking more brightness out of its OLED panel than normal.

It’s not just the overall perception of brightness that impresses, either. Also outstanding is how intelligently the screen uses the brightness available to it. A tricky mid-bright shot of a woman walking around a posh indoor swimming pool features all manner of different light levels and conditions within each frame, yet every single one of these light levels is delivered with perfect balance and naturalism. This also helps the image look more detailed, deep and almost three-dimensional (without actually being 3D) than you could ever get from a screen containing less brightness precision – which means any LCD TV, really, and to a lesser degree LG’s OLEDs, too. 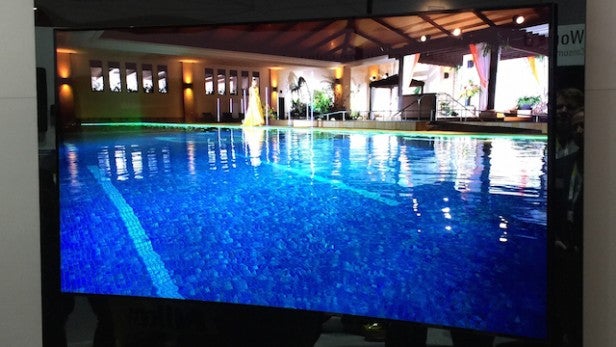 The Panasonic OLED’s colour handling seems every bit as nuanced and infinitely precise as its light handling too, delivering shots that combine tricky skin tones and bold, almost primary lighting effects with absolute authenticity, and without leaving any hues looking over-dominant.

The Panasonic OLED is a native 4K affair, and every last pixel of this resolution is put to use in joining forces with the colour and luminance precision to deliver an image of breathtaking clarity and detail.

Perhaps the ultimate testament to the quality of the Panasonic OLED picture is the fact that Panasonic has felt confident enough to feed its screen plenty of really quite naturalistic video footage for its demo, as well as the ‘primary colour against black backdrop’ stuff more typical of OLED demos. So, for instance, you get a shot of a snowscape that reveals an astonishing range of subtle light levels and details while relying on no hint of a deep black to make its impact. Plus the aforementioned shot of the woman walking around the swimming pool is an astounding example of what could have looked like a pretty routine image being made almost otherworldly beautiful by the sheer quality of Panasonic’s OLED efforts.

It’s worth stressing, too, that as always with OLED screens you can watch Panasonic’s OLED from a very wide viewing angle without any loss of colour richness or contrast.

In an absolutely perfect world Panasonic’s OLED might have retained just a touch more shadow detail in the very darkest parts of its images. For instance, shots showing a city at night do look a bit more ‘hollow’ in the darkest areas than they probably should. But this doesn’t stop the screen from claiming arguably the most captivating picture quality of the entire 2015 CES.

Fingers crossed Panasonic comes good on its promise and takes this exquisite screen from prototype to on-sale status before the next CES rolls round.