Seemingly not phased by the fact that it still hasn’t managed to ship any of its 2014 4K OLED TVs to the UK, LG certainly wasn’t shy about coming forward with its 2015 4K OLED models at this year’s CES.

As soon as we stepped onto its stand we were made to feel alarmingly small and insignificant by a huge, three-storey pile of TVs. All of which, remarkably, were OLED models. Even more importantly, this OLED skyscraper included many different models; is wasn’t just the same one or two models repeated ad infinitum.

In other words, this was LG’s way of declaring that we no longer need to entertain any doubts over whether OLED can ever be a mainstream(ish) technology. It’s now here in volume – so much so that LG will have in 2015 10 different OLED TVs available in what could genuinely be called a ‘range’ of OLED TVs. Blimey. 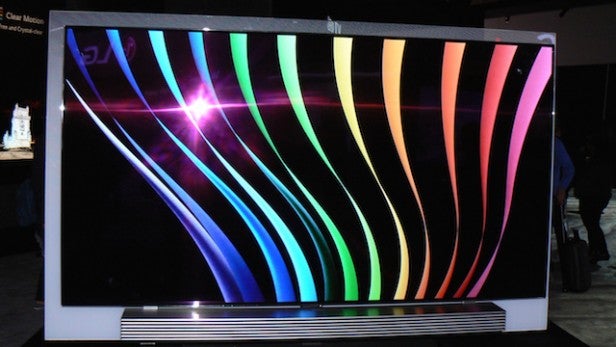 There’s even a pretty decent bit of variety in this 10-strong offering. For instance, many of our readers may well be pleased to hear that not all the new sets are curved. The 65-inch and 55-inch EF9500 models are flat, and there’s even a flat model which brings genuine home cinema sound quality to proceedings by integrating a startlingly large – but still very attractive – soundbar under its screen that carries a 4.2 speaker system especially designed for the TV by LG’s audio division.

Further adding to the OLED variety on show is that must-have accessory for 2015, a bendable model. A set, in other words, which can be set flat or curved at the press of a button on the remote control, depending on your tastes or what you feel works best with the different sorts of content you’ll be watching.

Once the remote control had finally been tracked down for this 77-inch bendable OLED beast, we couldn’t get enough of watching the screen curve in at the edges and then flatten out again. This is a trick which never seems to grow old – however gimmicky it might sound and doubtless expensive it will be to buy.

There’s no sign of physical line seam structure in the image despite the segmentation in the TV’s rear that makes the bending possible, and nor does the image distort or lose any of its quality in the bending process – even at the image’s centre, where presumably the stresses on the OLED panel are at their strongest. It’s all very clever, and LG assures us the set isn’t just a concept design; in fact, it’s scheduled to go on sale at some point in 2015, so if you fancy having a heck of a talking point for posh dinner parties, you might want to start investigating remortgaging in the next couple of months. 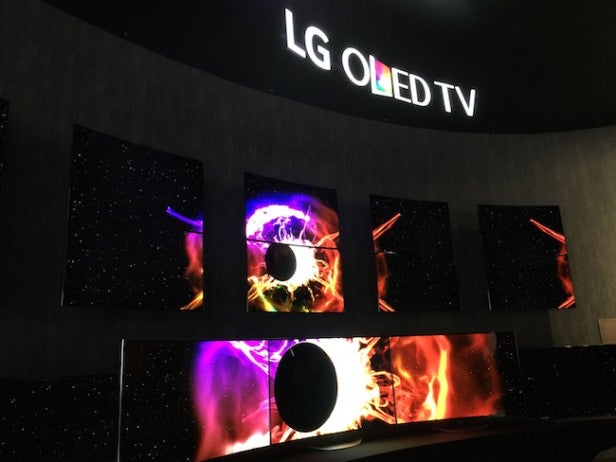 Many of the new 4K OLED TVs enjoy a new look versus LG’s previous OLED sets too. Dubbed Art Slim it does a better job than most previous designs of emphasising the incredible slimness possible with OLED technology, especially as it’s reduced the impact of the central section where the tuner, connections and so on have to be housed. Even better, the Art Slim screens are attached to their attractive and very well built brushed metal stands by a near full-width transparent neck that really does make the screen part look like its hanging in mid air – at least when viewed from a typical sitting position.

Another feature separating new 2015 OLEDs from their predecessors is LG’s new webOS 2.0 smart system. We’ll be looking at this soon in a separate CES first look, so we’ll just say here that it runs much faster than last year’s version, and mercifully hasn’t started to get too over-complicated.

As you’d expect given that these are OLED TVs, they performed beautifully for the most part on LG’s CES stand. Being able to see a whole edifice of them running in tandem really emphasised OLED’s incredible talent with black level response, for instance, as well as OLED’s ability to maintain this incredible black level depth while simultaneously showing incredibly bold, gorgeously saturated colours. It’s worth pointing out that all of LG’s OLED screens use 10-bit colour technology rather than the 8-bit systems used on all of its LCD TVs. 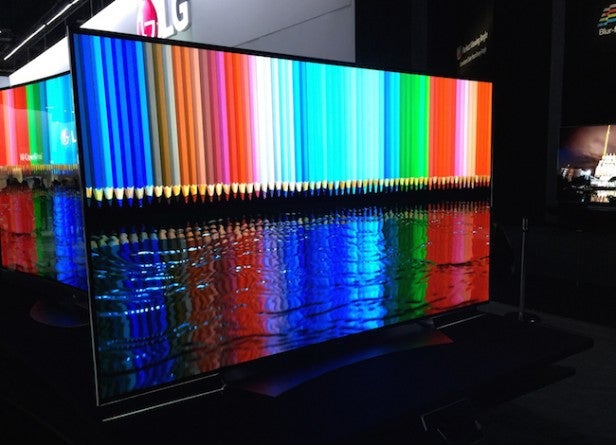 Detail levels looked spectacular with the UHD content reel being used for all the OLED demos on the stand, suggesting that the OLEDs are benefitting from LG’s video processing as well as the natural benefits OLED brings to the party. Even motion seemed to be handled fairly well, despite LG sometimes having issues in this department in the past.

If we had any complaints to make they would be that a) LG hasn’t really attempted to improve picture quality in any way from its 2014 models, with essentially the same core panels being used now as then, and that b) sometimes really dark shots could seem a bit hollow thanks to a lack of visible shadow detail, especially towards the edges of the image.

Overall, though, despite LCD upping its game with talk of high dynamic range and wide colour gamuts, LG’s 2015 CES OLED presence still put forward a pretty darned convincing case for OLED being the TV tech of the future, at least for serious AVphiles.