What is OS X El Capitan?

A few years ago, Apple released an update to its then current Mac operating system called Snow Leopard. On the surface everything looked the same. But it worked that little bit faster, had less bugs and felt like a product that was really ‘complete’. It has, to this day, been the best version of OS X.

El Capitan tries, with varying amounts of success, to repeat this. It’s like the ‘S’ upgrade cycle on iPhones – same on the outside, tuned up on the inside. With just a smattering of ‘obvious’ new features and visual upgrades to keep the masses happy.

On the whole, it’s great. Though, I’m starting to feel Apple’s insistence on bringing lots of iOS influenced features to the Mac is taking the OS in the wrong direction. 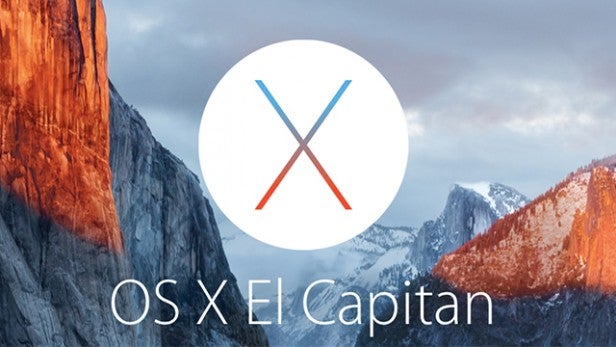 Last year’s Yosemite was a huge shift in the way OS X looked. It lifted the sheen, the transparency effects and the ‘modern’ look from iOS. Everything, from the icons, to the finder and Apple’s pre-installed apps got a fresh coat of frosty paint. It looks great, even a year on, so it’s not really a surprise little has changed in El Capitan.

Just like on iOS 9, El Capitan now uses San Francisco as the default, system-wide font. While the difference on the iPhone is minimal – mainly because all compatible phones boast a Retina display – there’s certainly a noticeable improvement on the Mac.

The new font is ever so slightly larger – to my eyes anyway – and marginally wider. It looks great on Macs with a high-res display, but unlike the wispy, thin font from last year, it looks much better on older Mac displays now too.

Another nice, albeit minor, design flourish is the new cursor. Well, new might be pushing it a bit, as it looks the same, but give it a quick wiggle with your mouse or trackpad and it’ll instantly magnify, saving you from hunting for it amongst all your open windows.

It sounds odd, and almost gimmicky, but I use it everyday. It’s things like this that make me always stick with OS X.

Multitasking is a headline feature in this year’s iOS update. Being able to run two apps simultaneously is a feature that Apple’s slates have been missing for years, but the company has also brought a similar feature to OS X. I love the implementation on the iPad – it’s sleek and fast – but I’m a little baffled by it on the Mac. I don’t think it needs to be there.

It works like this: Once you open up app into full-screen mode, and jump into Mission Control – which has also been updated – you can drag another full-screen app into the initial app and have them sit side-by-side. Apps need to be updated to support this, so for now it pretty much just works with the built-in programmes. You can have Mail and Safari together, or Notes and Maps. 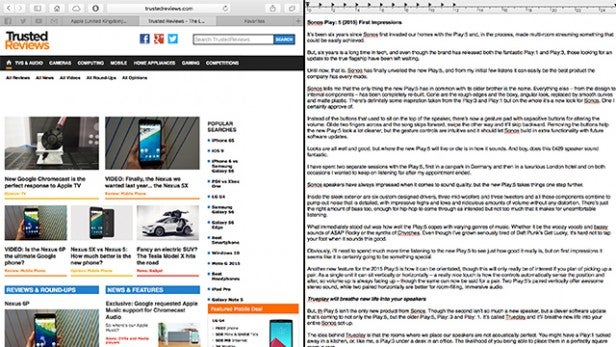 It works, just as smoothly and intuitively as it does on the iPad, but I never use it. I can already resize windows to sit next to each other on the Mac, and I’m not stuck in the limited full-screen view, or with just two apps on the go. Being blunt, on an iMac, having just two apps open side-by-side on a 21-inch display seems, to me, like a waste of space.

The idea makes more sense on a laptop. Especially the beautifully svelte and almost iPad like 12-inch Retina Macbook. And it’s clear it is much more focussed on the laptop market over the desktop. A quick glance over the El Capitan web-page shows only images of it running on a MacBook. No iMacs in sight.

If three or four apps could be displayed on big screen I could understand the feature’s usefulness, but in its current state it feels like wasted potential. 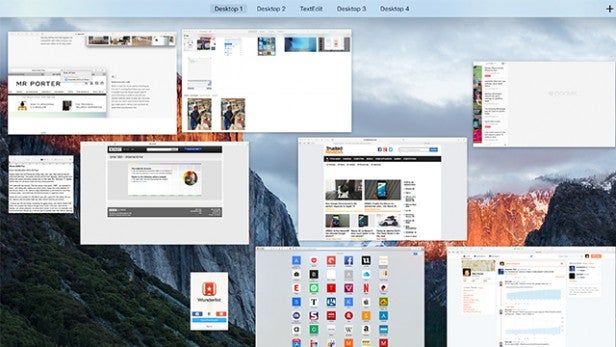 I might not be won over by the split-screen stuff, but Mission Control – the overview of all your open windows, apps and whatnot that’s accessible either from the keyboard shortcuts or three finger swipe up on a trackpad – is still one of OS X’s killer features.

In El Capitan, the whole view has been tidied up. Multiple windows from the same app now show up in one layer, rather than tucked behind each other, letting you easily pick out exactly what you’re looking for.