For a couple of years now, iOS inspired design and feature tweaks have been making their way into OS X. El Capitan continues that trend.

In the Mail app you can now swipe (with a trackpad or magic mouse) away messages to delete, or mark them as read/unread. Because I’m so used to the nature of interacting with touch screens on mobiles and tablets, it feels natural to swipe away emails with a flick on a trackpad. 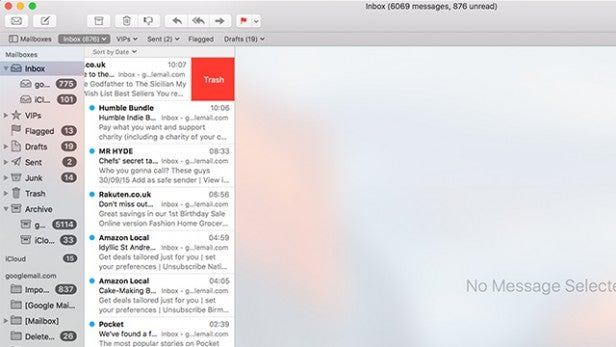 One of the coolest new tricks in Mail is tabs. It might not sound that exciting, but having multiple emails open at the same time and neatly organised is fantastic. It also makes going back to age-old versions of Outlook on my work Mac even tougher.

Maps picks up all the iOS 9 transit tweaks, so journeys can now take into consideration bus, train and tube travel. You can also see upcoming departures by clicking on a tube station or bus top – a feature from Google Maps I really like.

Apple Maps is finally catching up to Google’s all conquering mapping solution, but it’s not there yet. Directions, on the whole, are not as accurate – some roads seem to be completely missing from Apple Maps – and the POIs are still lacking. There’s also still no way to access it from the web, so you’ll probably end up going back to the competition at some point anyway. 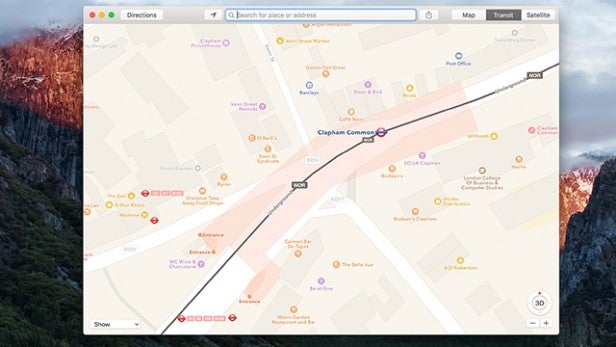 One of the few apps to get a radical overhaul in El Capitan is Notes. As an avid Evernote user, I rarely touched Apple’s native note-taking solution. Not because it was necessarily bad – it was fine for basic jotting down – but it lacked features to make it stand out.

I can easily say it’s much better now. You can create handy to-do lists with checkboxes, add formatting to text and import pictures to create something akin to a scrapbook.

Any doodle you make on an iOS device will also sync over, though the sketching tools haven’t made their way over to the Mac from the iPhone. 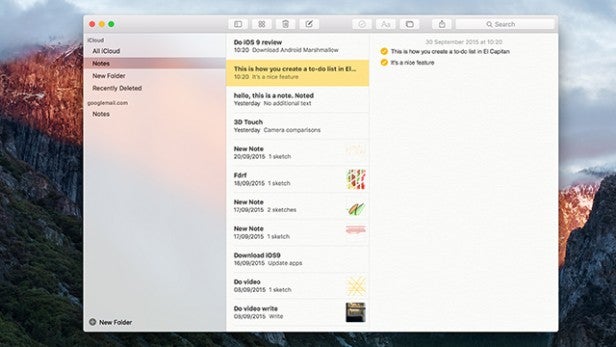 Like any of Apple’s other baked in applications, the look is on the simple side. It’s functional, though it lacks any real killer touches or design flourishes.

Safari has picked up some of the coolest new features. You can now pin tabs so they always appear, even if you close the window, and a handy audio icon pops up whenever there’s sound playing. Both of these are excellent, and make Safari much better to use.

Finally, Photos can now plug directly into other other apps to perform further functionality. So, if you’ve got a compatible photo editor installed you can use those features right inside of Apple’s app. I like this, especially as the editing tools inside Photos are quite weak, but it lives and dies by which apps support it.

If your Mac is jammed with documents, apps, movies, music and so much else, you’ll already know how much of a timesaver Spotlight search is. In El Capitan it’s even better. 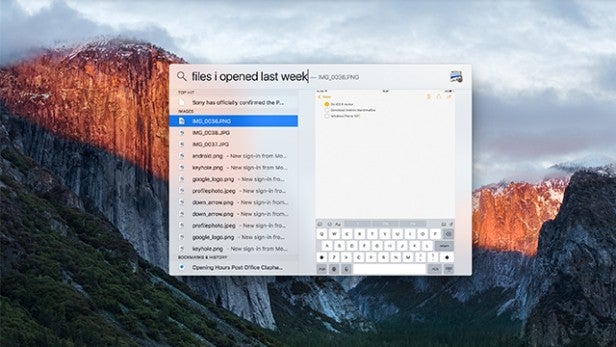 Natural language search is the best of the new additions. I can type ‘documents I started last week about the iPhone’ or ‘emails about football from Mike’ and the relevant stuff will pop up.

Not having to alter my searches to try and think what the computer will understand is great and the I found the searches it brings up are very accurate.

Spotlight can also find sports score – If I type Leicester City it’ll bring up the previous result, bring a load of upcoming fixtures – weather, stocks and so on.

My only issue with Spotlight is that, well, it’s not quite Siri. With Microsoft bringing Cortana to Windows 10 and Google giving its Now service a strong web presence, this year seemed the perfect opportunity for Apple to brings its iOS digital assistant to the Mac. 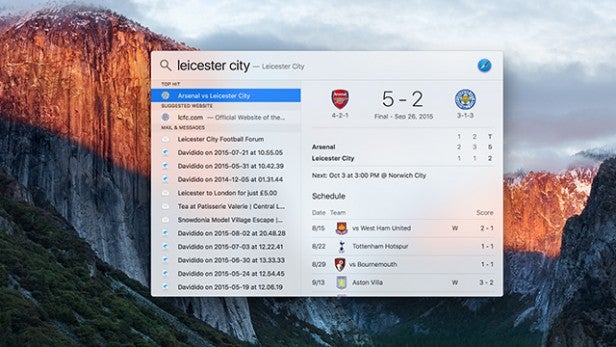 But, it’s still missing in action. I’m sure – I hope – that it’s coming soon as some of its Proactive skills from iOS 9 would be awesome on the Mac, but it’s not here yet. Imagine asking your Mac to remind you to buy some chicken next time you start an online shop, or dictating an iMessage that would instantly be sent off. It just makes sense.

El Capitan is all about boosting performance. Fine-tuning your Mac to make it run faster. And it really does, in fact I’d recommend updating just for the performance improvements.

From opening apps, to browsing the web to general day-to-day usage, there is a noticeable improvement over Yosemite.

And this isn’t just on high-end Macs, but it seems to breathe new life into the older generation too. My 2012 iMac with an i5 processor and 8GB RAM ran fine before, but it has an extra hit of pep in its step now.

Boot time on my 2015 MacBook Pro is marginally faster – it’s about 2-3 seconds faster – though there’s a more noticeable improvements when exiting sleep. Again, my older iMac started up quicker, though that’s less of a bonus for a desktop bound computer.

Bugs and strange quirks are commonplace in new software, and I ran into a couple during my time with El Capitan. They’re minor though, and really shouldn’t put you off upgrading.

I’ve had some difficulty getting certain games – Football Manager 2014 and 2015, for example – to display correctly in full-screen mode. The cursor also refuses to disappear when playing full-screen in Netflix.

These are minor quibbles though and on the whole there is little to worry about.

Should I upgrade to OS X El Capitan?

In my iOS 9 review, I said even though there aren’t a whole load of visual changes it was still a must have download simply for the performance boost and under the hood tinkerings. I’m going to say exactly the same for El Capitan.

Yes, there are some new features here – the updated Notes app is great if you have an iOS device, Apple Maps is finally catching up to Google and the new abilities picked up by Spotlight search are fantastic. Finally, the small changes to Mission Control are excellent and I’d say it’s still one OSX’s strongest selling points. But, it’s really all about the improved performance and that’s not a bad thing.

My only issue is that maybe Apple’s constant need to bring iOS features the Mac – split-screen is a great example here – is starting to take away from functionality.

It might look similar on the surface, but El Capitan is a fantastic update that improves performance and adds some great new features.