While we wait impatiently for Optoma’s debut 3D projectors to arrive in our test rooms, we’ve finally managed to prise out of the brand a 2D model we’ve been chasing for months: the ThemeScene HD87.

As the ThemeScene part of its name reveals right away, the HD87 belongs to Optoma’s dedicated – and usually very likable – range of home cinema projectors. In fact, it’s currently the flagship model, and as such comes sporting a pretty impressive-looking spec sheet.

It’s a full HD affair, inevitably, driven by a single-chip incarnation of Texas Instruments’ DLP technology that’s able to produce – it’s claimed – a more than credible contrast ratio of 80,000:1. Its brightness rating is high at 1700 ANSI Lumens too, raising hopes that we’re going to be enjoying really punchy, ‘poppy’ pictures that potentially much better than might normally be expected for less than £3,000.

There’s more good news from the HD87’s connections, as we find three HDMIs where far too many projectors still only bother with two. Plus you get a D-Sub PC port, an RS-232C control port, a component video input, and two handy 12V trigger ports that you might want to use in conjunction with Optoma’s optional ‘Constant Height Projection’ BX-AL133 lens system, which lets you switch between 2.40:1 viewing (if you have a 2.40:1 screen) and 1.85:1 viewing depending on which format a particular film has been shot in.

Another great touch for a £2,800 projector is the fact that you can get it with any of three different lens options: a standard one, a long-throw one, and a short-throw one. There’s a fair amount of optical zoom for each lens too, and tucked away under a pop-up panel on the projector’s top edge are two simple – though not especially precise – wheels for shifting the image vertically or horizontally.

The combination of all these features should ensure that nobody has to worry about using dreaded keystone correction (AKA image distortion!) to get the sides of their picture straight.
The HD87’s design is fair to middling. The promisingly large, centrally mounted lens helps create a good sense of symmetry, and the curved top panel is pleasant. But the grilled finish to all of the projector’s sides looks a bit over-busy for our minimalist tastes, and the build quality is somewhat plasticky.

Heading into the onscreen menus via the reasonably logical, backlit remote finds plenty of calibration tools to get our teeth into. These include a pretty fulsome if somewhat long-winded colour management system, gamma presets that let you make adjustments according to curve type and offset levels, control over a dynamic iris system that includes turning it off if you’re not happy with it, and a 9-stage manual iris adjustment.

Such setting flexibility joins the trio of lens choices and BX-AL133 2.4:1 anamorphic lens option in giving the HD87 custom install potential beyond its price level.

The one glaring omission from the HD87’s features, we guess, is 3D. The Sony HW30, and the upcoming Panasonic AT5000 and Epson 9000 series projectors are all introducing 3D for similar money to the HD87. Plus, of course, as mentioned at the start, Optoma has a pair of 3D models of its own waiting in the wings: the HD33 and HD83.

However, it’s a simple fact that there are still plenty of people out there who couldn’t care less about 3D. So if the HD87 trades 3D for a bit of extra 2D quality, it will surely find a willing audience.

First impressions of the HD87 in action are promising. There’s a really dynamic, bright look to proceedings that immediately goes a good way towards explaining why the HD87 is Optoma’s flagship projector – and why it costs £2700 despite not having 3D. In fact, with some of the provided presets the image is bright enough to support viewing in rooms that aren’t completely blacked out, should achieving total darkness in your room be a problem.

The image is also sharp and detailed without looking stressed (though dark scenes can look a tad noisy), and motion is handled naturally, without serious judder, any significant sign of DLP’s potential dot fizzing issue, or blur.

You can even remove what minor judder there is via an onboard PureMotion processor, but to be honest, even on its lowest power setting, this caused the image to look a touch more processed and artifacty than we felt comfortable with.

While it is possible to see DLP’s rainbow effect (red, green and blue striping over very bright parts of an image or in your peripheral vision) during scenes that contain a stark mix of very dark and very bright content, for the most part it isn’t a significant issue – and that’s speaking as people who have become quite sensitive to seeing it.

For a brief moment we thought we were happy with the HD87’s contrast performance too. But actually, after a few minutes something started to feel not quite right. For it seemed to us that dark parts of pictures looked rather hollow – an impression that was quickly and emphatically underlined by running a simple pluge test pattern into the projector.

Basically, no matter what we tried – the projector’s presets, its brightness and contrast sliders, its dynamic and manual iris settings – we simply couldn’t get the HD87 to produce the lower-brightness end of our pluge ‘spectrum’. The deep grey bar just disappeared completely and irretrievably into blackness – a trait that manifests itself in the HD87’s finished pictures as an obvious lack of shadow detail in dark areas.

So severe is the problem, in fact, that we couldn’t even see the lowest-brightness ‘cog’ of Gears of War 3’s brightness setting test screen – even though we had no trouble whatsoever using this test screen to help optimise the settings on our resident Epson TW5500 projector. 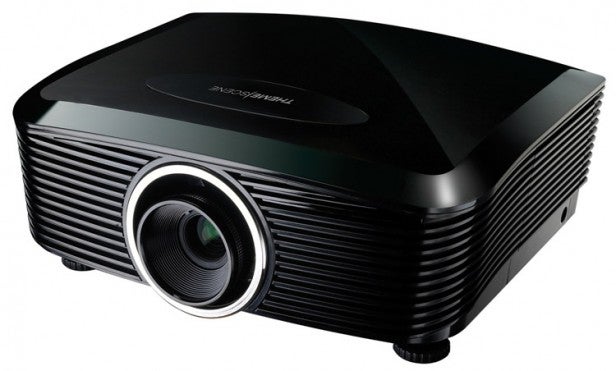 Not having shadow detail in dark areas of the picture makes dark scenes feel flat and out of kilter with the rest of the image, as well as making dark areas seem too dominant. Plus it forces you to set brightness and gamma levels higher than you might ideally want to – certainly with Gears of War 3 we found ourselves playing with an image that actually looked a little to bright for our tastes just so that dark scenes didn’t look completely like black holes.

Another area of discomfort with the HD87’s pictures in their ‘out of the box’ state was a distinctly yellowy tinge to pictures that was particularly evident over skin tones. Fortunately we were able to resolve this adequately via the CMS, but it’s a shame things weren’t a little better balanced from the off.

Turning finally to the HD87’s running noise, it’s fair to middling. You can certainly hear the fans quite clearly even when you’re using the lowest lamp output mode, but it’s a very low, smooth and consistent sound, so it’s pretty easy to ‘tune out’.

Verdict
The HD87 has the pedigree and specification to be a truly top class projector – and with a fair wind and the right sort of predominantly bright content, its pictures can indeed look superb. But for some reason we’re struggling to really understand, something about its configuration prevents it from delivering well-balanced and detail-rich black levels. Pity.