Despite still
not having brought to market the stunning looking R series of projectors it
showed at a pre-IFA event last year (they’re apparently now
going to arrive by the end of this year), Epson is on bullish form at this IFA
too, thanks predominantly to the launch of its debut 3D projectors.

At a swanky
‘off-piste’ launch event at the sensationally designed axica conference and
convention centre in Berlin, we were introduced to no less than five new Epson
3D models: the EH-TW9000, EH-TW9000W, EH-TW5900, EH-TW6000, and EH-TW6000W.

Some
of these model numbers look pretty similar on paper, but actually the extra ‘W’
at the end of two of the names is very significant. For it signifies that -
in a first for the projector world – the TW9000W and TW6000W support wireless
HD.

This system
allows full HD signals to be broadcast wirelessly from any HDMI-carrying
sources to the projector, finally doing away with the cabling problems that
usually accompany a projector installation.

The Wireless HD standard even
supports the ‘beaming’ of full HD 3D images from source to projector, and we’re
happy to report that during our hands-on with both the TW6000W and TW9000W we
spotted absolutely no sign of any interference or loss of quality from the
transmission system, with either 2D or 3D sources. Brilliant.

Also rather
brilliant is the performance of the TW6000W and TW9000W models we got to try.
Epson’s briefing, before we were let loose on the projectors, made much of the
efforts its engineers had put into delivering a remarkably fast 480Hz 3D refresh rate, able to counter the
crosstalk (double ghosting) and lack of brightness problems commonly found with
full HD active 3D displays. And it became quickly apparent during our hands-on experience that Epson’s claims
were much more than just marketing hot air.

First up was the
TW9000W, with its claimed contrast ratio of 200,000:1 and 3D-friendly
maximum brightness rating of 2,400 lumens. The
projector was demonstrated in rather unideal circumstances on a very large
160in screen in a room with white walls – both of which reduced the potential
brightness impact of its light output and 480Hz combination. But it still
impressed hugely with its pictures, especially with 3D. 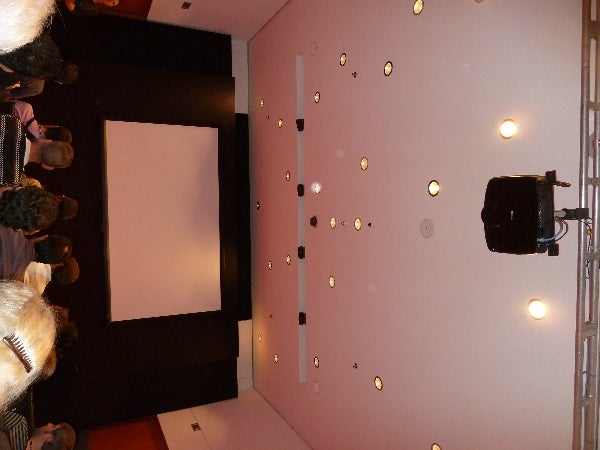 Particularly
exciting was the lack of crosstalk. It’s not been completely
eradicated, but it never seems to appear around key, foregrounded objects, even if they’re bright ones appearing against a dark backdrop. Even when we did spot occasional traces of crosstalk in the background, it tended to
be of a very low level – certainly less readily apparent than it is
even on the recently reviewed Sony VPL-HW30ES – allowing the picture to focus your
attention instead on its excellent portrayal of HD 3D detailing and sharpness.

It also dawned
on us during the course of our time watching the TW9000W that its 3D pictures
really were respectably bright considering they were appearing on a 160in
screen – a realisation underlined by the experience we got later on a
smaller screen with the TW6000W.

Colours look
impressively accurate too with Epson’s passably comfortable 3D glasses on, and
finally Epson’s latest motion processing circuitry did a great job of removing
judder and blur from proceedings without leaving things looking too
‘video-like’ – until at any rate someone made the mistake of setting the motion processing
to its highest, over-aggressive level.

The only
negative thing we might say is that the quality of the projector’s 2D pictures,
while certainly good, didn’t leave our jaws hanging open in awe like the
efforts of Epson’s upcoming R series models, particularly where black level was
concerned. But with likely price tags of just £2962 for the TW9000W and £2650
for the non-wireless HD TW9000 – prices which include a built-in 3D transmitter
and a pair of glasses – Epson’s new 3D flagships showed us more than enough
quality for their money to make it clear that the rest of the burgeoning 3D projection world
could have plenty to worry about come November.

Moving on to the
TW6000W, with its 40,000:1 contrast ratio and 2,200 Lumens of brightness, we
were more than a little surprised initially to find the projector set up in a
mock living room, complete with two bright lamps turned up to throw out quite a bit of
ambient light.

However, as soon as we clocked the remarkable brightness of the
TW6000W’s images on the 100in screen despite the room’s light ‘pollution’ we
got Epson’s point loud and clear: namely that the TW6000W/TW60000 models, along
with the cheaper, less contrast rich TW5900, are the first full HD 3D
projectors designed to cater for relatively casual,
sociable users who want a ‘fun’ 3D projector that’s easy to set up (although sadly neither the 6000 or 5900 models have vertical image shifting); bright enough to use without
completely darkening the room; and most importantly of all, cheap. The TW6000W
is set to cost just £1649, while remarkably the TW6000 is likely to retail for
just £1349 when it launches in October. This unexpectedly aggressive pricing
effectively open us up a whole new – and very welcome – 3D projection market.

During the
introductions to the new 3D projectors, an Epson spokesman declared that Epson ‘may not be the first to the 3D projector market, but we intend to be the best’.
And on the evidence of what we’ve seen so far, he may have a point.