Considering Panasonic was the driving force behind bringing full HD 3D
technology into our living rooms, and remains the most vocal proponent
of the alternate frame 3D approach, the amount of time it’s taken the
brand to produce a 3D projector seems bizarre.

After all, nobody
doubts that 3D looks its best on really big screens of the sort you can
only get – for remotely sensible money, anyway – with a projector
system. And nobody should be in any doubt, either, that Panasonic knows
its projector onions; there are multiple generations of home cinema
models, culminating in the PT-AE4000, to prove that Panasonic is actually one of the best LCD projector makers around.

Yet
the fact remains that until the official Los Angeles launch of the
Panasonic PT-AT5000 at the end of last week, Panasonic hadn’t given us a
single 3D projection solution – despite a growing public clamour for
one.

What’s taken the brand so long? According to the PT-AT5000’s
senior product manager, Rena Yotsu, it’s a simple matter of quality:
“We wanted to create a premium quality product in keeping with
Panasonic’s uncompromising approach to 3D. We didn’t want to go out at a
premature stage – we wanted to be safe.”

These are bold words that obviously set the AT5000 up for a fall. But
based on what we saw at the launch of the projector at Panasonic’s
Hollywood Labs (PHL) in Los Angeles, a ‘fall’ is not likely to be on the
cards.

The first thing that struck us as Panasonic whisked the
cover off the AT5000 for the first time in its suitably awesome PHL
cinema room was that thankfully it’s a more attractive beast than the
frankly industrial PT-AE4000. It features less of the grilles that
dominate all sides of the AE4000, its finish is slightly flasher, it’s
slightly less chunky, and most amazing of all, it’s actually got – gasp -
a few curves.

It’s still got a pretty expansive footprint for a
projector that’s likely to retail for under £3k when it launches in the
UK, though, ensuring that it looks suitably serious rather than like
some casual ‘shove it in a cupboard when you’re not using it’ affair.

It’s
been nearly 18 months since the AE4000 came out, so it’s good to see
that the AT5000’s specs offer some major improvements beyond the ‘mere’
addition of 3D. Particularly eye-catching is the doubling of the claimed
contrast ratio to 300,000:1, thanks in part to a completely new dynamic
iris design. But also potentially significant given the AT5000’s 3D
ambitions is a significantly higher brightness output of 2000 ANSI
Lumens. Brightness is particularly important with 3D projectors, because
they need to combat the inevitable dimming effect of active shutter
glasses.

We suspect one of the main reasons it’s taken Panasonic so long to get
the AT5000E out has been a desire to suppress crosstalk noise – the
dreaded double ghosting phenomenon that still troubles many 3D displays,
including Sony’s much more expensive VW90ES projector. With this in mind, the AT5000 runs its trio of LCD panels at 480Hz.

There’s
also apparently some other technology going on under the hood designed
to keep crosstalk to a minimum, but Panasonic refused to explain how it
worked, referring to it with a knowing smile as exclusive ‘black box’
technology. Fingers crossed we’ll be able to squeeze something less
mysterious out of them when we’re actually reviewing the projector. 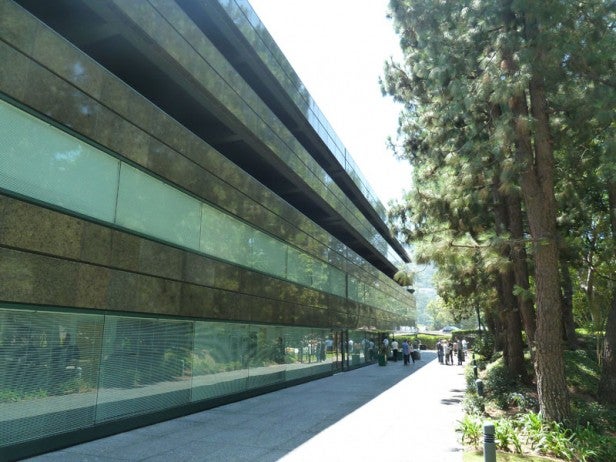 The extent to which Panasonic has catered for 3D in the AT5000’s set up
tools is startling. For one thing, you can adjust separately the colour
balance for each ‘eye’ of a 3D source, to correct for potential
imbalances in the stereoscopic source material. Even more intriguing is
the facility on offer for adjusting a 3D image’s convergence point.

Designed
to make 3D viewing less tiring, this feature displays a little chart
showing the maximum and minimum parallax levels for comfortable viewing
at different screen sizes, and then shows the actual parallax level of
the image being watched as a yellow line that should sit between the two
white ‘extremities’. If any part of the yellow line sticks out beyond
the min/max parallax levels, then the image you’re watching could cause
tiredness. So the projector allows you to reduce the convergence point
of the image until it fits within the min/max lines.

There’s an
obvious issue with this tool in that film-makers who actually care about
3D like to define parallax levels when they’re mastering their films
for home cinema reproduction. So they may not take too kindly to the
idea that this key setting can be adjusted by the end user. 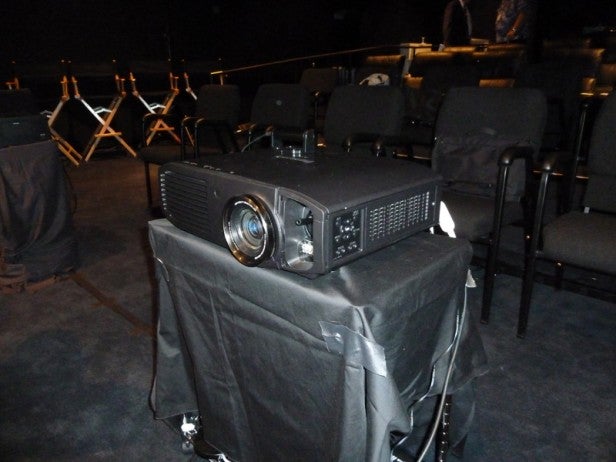 However, it seems to us that since different viewers can have widely
different tolerance levels and personal preferences for 3D viewing, it’s
perfectly reasonable for a projector to try and accommodate this
variety. Especially if it helps more people enjoy 3D without feeling
tired.

The 200W lamp at the AT5000’s heart is built into a new enclosure
designed to improve the efficiency of its light output – another factor
in that 300,000:1 contrast claim, we suspect. The lamp also delivers an
improved version of the ‘red rich’ technology Panasonic introduced on
the AE4000, designed to counter the colour balance issues you commonly
get with LCD projection technology.

Impressively, considering how
bright it is, the AT5000 can apparently run with just 22dB of operating
noise. Certainly we could scarcely hear it at all from our position in
the second row of theatre seats behind the demo unit.

It was also
pretty easy from our viewing position to see that the AT5000 is a
vastly superior projector to its AE4000 predecessor. With 2D material
its images contain much richer colours, much deeper black levels, and a
generally much punchier look that shows instantly that the AT5000’s
claim to have three times as much contrast as the AE4000 is more than
idle boasting.

Add in a marginal improvement in sharpness with HD
sources, and the AT5000’s 2D performance seems to have outstanding
potential for a sub-£3k model. 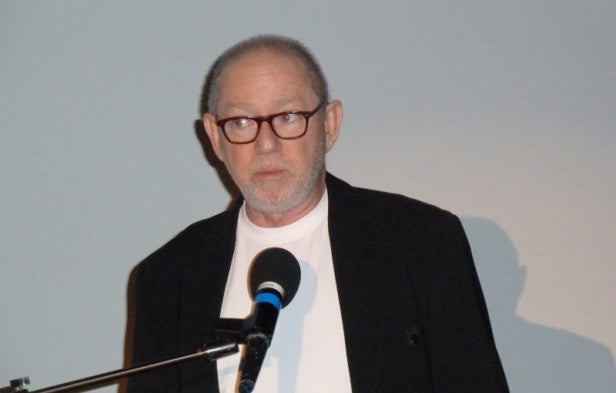 Its 3D performance, too, seemed mostly impressive during the 20 minutes
or so time we got to spend watching it. Crosstalk, while not completely
absent, appeared to be the lowest we’ve seen on any projector besides
Sim2’s staggering but £30k Lumis 3D-S.
Partly thanks to this, the levels of detail and sharpness visible with
3D Blu-rays were immense, and motion in the 3D image looked impressively
natural.

If we had any concerns from our demo, it would be the
amount of brightness taken out of 3D pictures by Panasonic’s 3D glasses.
But we should stress that our demo wasn’t done under our usual test
conditions or using any of our usual test materials. Furthermore,
mention was made of different 3D glasses brightness settings being
available with the AT5000, but we weren’t able to test these out to see
what a difference they might make.

All in all, though, the
AT5000’s launch, with its mix of extensive technical presentations,
supporting presentations by genuine Hollywood film ‘folk’ (including
cinematographer Steven Poster, above) and the impressive results of the AT5000
demo sequences, can be considered a resounding success. As a result,
frankly the projector’s mooted September launch just can’t come fast
enough.