The Optoma HZ40 perfectly encapsulates the pros and cons of budget laser projection. While that might make it interesting on an academic level, though, it doesn’t necessarily make it the great all-round home entertainment projector we’d hoped for.

With the HZ40, Optoma has somehow put together a projector with laser lighting and 4K home entertainment ambitions that include both 4K HDR playback and 4000 lumens of living room-friendly brightness for just £1,249. If you think this sounds too good to be true, though, you’re kind of right.

The HZ40 asserts itself as an affordable ‘4K’ projector with a price of £1249/€1149. It doesn’t appear to be available in North America or Australian markets.

The HZ40 is a cute addition to your coffee table. Its footprint is small enough to leave space around it for chips and dips, and its half smooth/half crosshatch white finish looks crisp and clean. Rounded corners give it soft, living room feel too.

The protruding lens is offset to one side, and sports manual focus ring and zoom controls. The zoom control is accessed through a window on the top edge, as usual with coffee table projectors. There’s no provision for optical vertical image shifting, though. 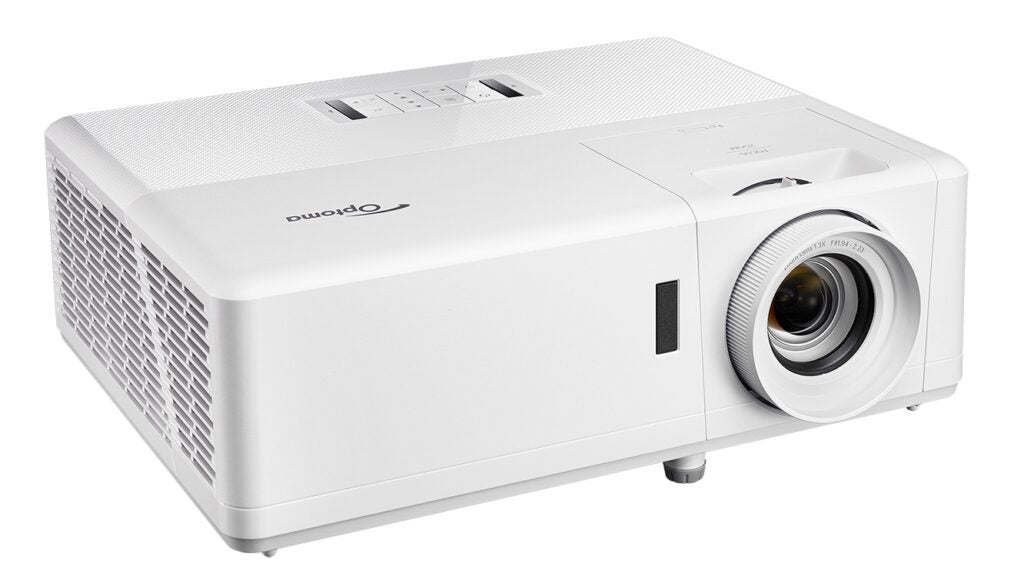 The HZ40’s remote is mostly impressive. Its straightforward shape is comfortable to hold, while buttons are well laid out and responsive. The only thing that feels off is the presence of laser pointer and Page +/- buttons, neither of which seem to belong on the handset of a projector that’s supposedly for home entertainment rather than business presentations.

The projector’s finish is pretty plastic-intensive, as you might expect given how cheap it is for a laser model. The build quality doesn’t feel flimsy, though, and both the focus and zoom adjustments feel decently precise.

The Optoma HZ40’s laser lighting system yields a number of advantages over traditional lamp-based rivals. For starters, it can output a colossal 4000 lumens of brightness. Enough, potentially, to deliver watchable pictures even in bright rooms.

The laser should also be good for up to 30,000 hours of uninterrupted viewing – enough for around 15,000 films. Or five years of lockdown level Netflix binging. Lamp projectors would typically need to replace their lamps anywhere between five and 10 times to deliver the same sort of lifespan. Something which makes the HZ40’s value look even more remarkable. 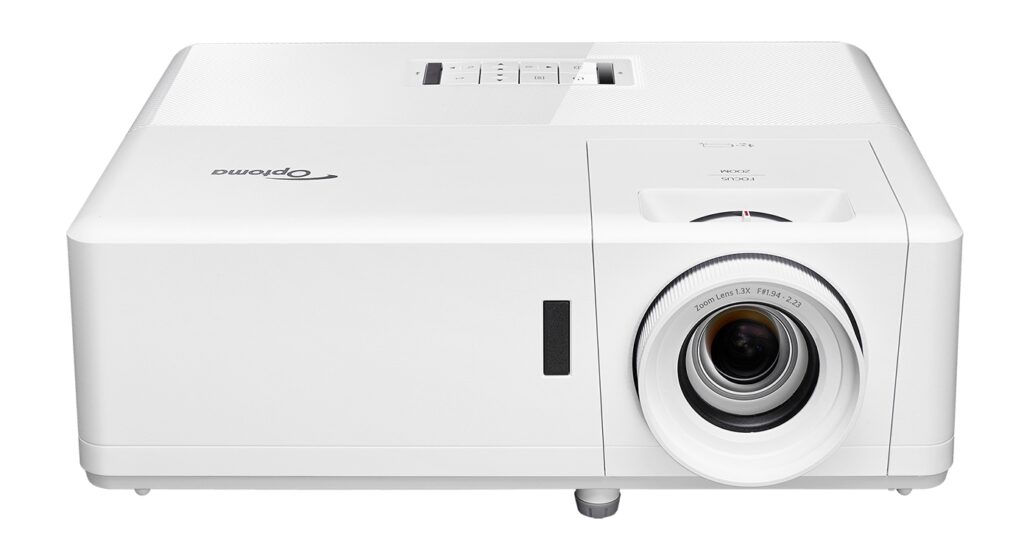 What’s more, unlike traditional lamps the HZ40’s laser source will experience only minimal performance loss over its entire mammoth lifespan.

Do note, though, that the 30,000-hour laser life is effectively the lifespan of the entire projector. Replacing the laser will not be a practical/affordable option.

The HZ40 also claims a monster contrast ratio of 2,500,000:1 – giving it exactly the same max brightness/contrast ratio figures as Epson’s LS500 laser projector, even though the HZ40 uses a DLP optical system while the LS500 uses LCD. As with the LS500, though, this contrast claim is pretty fanciful in real-world conditions.

While the HZ40 can play 4K sources, Optoma makes it clear in the projector’s feature list that its native resolution is Full HD 1920 x 1080. So 4K sources won’t appear in a native pixel for pixel 4K way. They may, though, look slightly better than HD sources due to their cleaner ‘starting point’ and the fact that they may also have been mastered in high dynamic range. 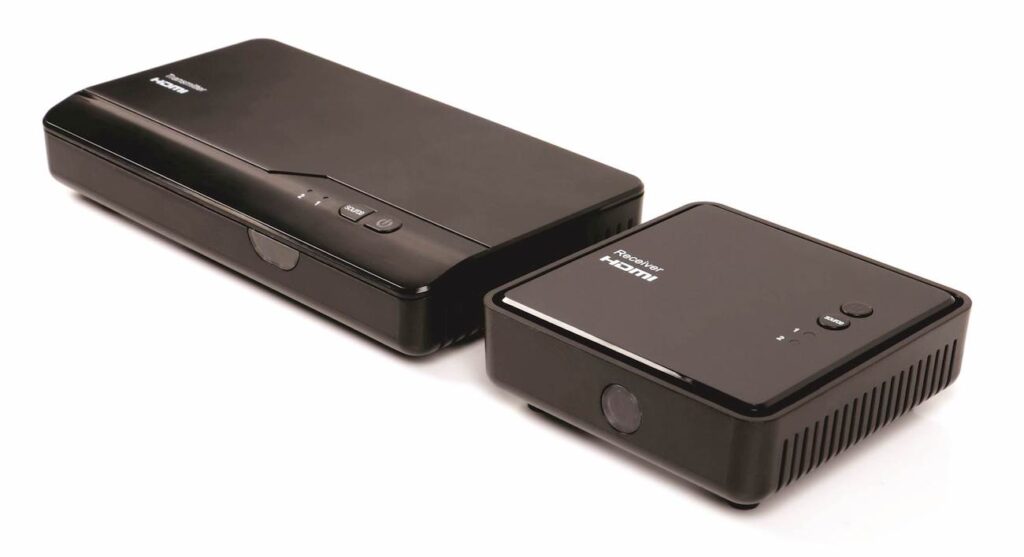 For an extra £310 you can get the Optoma WHD200 wireless HDMI adaptor, so that you don’t have to run a long HDMI cable around your living room. This only works with HD and 3D sources, though, not 4K.

The HZ40 can handle the industry standard HDR10 and broadcast/live stream-related HLG HDR formats. As with any projector, the HDR support is to some extent notional, as no remotely affordable projector can support the sort of light range true HDR requires. Even budget projectors, though, have recently started to get at least some benefit from HDR playback – and the HZ40’s 4000 nits of claimed brightness shouldn’t do any harm in this respect.

The brightness should also prove handy with combating the shuttering effect of your 3D glasses if you take advantage of the HZ40’s 3D capabilities. No 3D glasses are included with the projector, though.

Picture presets include the usual movie, bright room and game suspects, with the latter delivering just 8.4ms of input lag with 1080p/120Hz sources. This rises to 32ms with more regular frame rates, but this is still a good result.

Set up is straightforward. The zoom and focus adjustments both support impressive fine tweaks, and the 1.3x optical zoom is generous for such a cheap laser model. The onscreen menus are clean and sensibly organised, and connectivity includes a handy two HDMIs, a VGA port, a 3.5mm audio port, a powered USB (opening up the potential to adding streaming sticks) plus both Ethernet and RS232 control ports.

Finally, as with most home entertainment rather than dedicated home cinema projectors, the HZ40 carries a built-in audio system. This provides 10W of power, but only in mono.

While laser certainly feels like the future of projection, up to now even many laser projectors costing much more than the HZ40 have struggled to harness laser’s raw potential to the home entertainment cause. So it’s not surprising that the HZ40 struggles too.

The main reason for the HZ40’s struggles is a familiar one: limited black levels. It just doesn’t have the tools or picture adjustment options necessary to ‘tame’ its laser lighting enough during dark scenes to stop them looking rather grey and unconvincing. Especially with HDR content, where the projector needs to run more brightly (though it affects standard dynamic range playback, too).

As usual, the inability to achieve a good black colour in dark scenes results in other dark colours looking a little unnatural too. And as with the Epson LS500 (only more so), areas of low-luminance colour look noticeably rough/low on textures and blends compared with the HZ40’s wider colour performance.

Halving the projector’s Brilliant Colour setting from its 10 starting point brings much of the colour refinement back in dark shades. But only at the expense of some of the vibrancy and richness which, as I’ll explain later, is one of the projector’s strengths during bright scenes.

Unusually for an Optoma home entertainment projector, during dark scenes a grey frame appears around the edges of the image that can be quite distracting unless you can zoom it off the main reflective area of your projector screen.

The HZ40’s colours with standard dynamic range sources, meanwhile, tend to look biased towards green or purple, and my final gripe with the HZ40’s pictures is very noticeable rainbow effect (the single-chip DLP projector issue of pure stripes of colour flitting over stand-out bright parts of the picture, or in your peripheral vision).

Tolerance to the rainbow effect differs from person to person. I’d only describe myself as averagely susceptible to it, yet I frequently found it pretty seriously distracting on the HZ40 with both SDR and HDR content.

While there’s no hiding from the HZ40’s problems, its laser lighting does also have its benefits. As hoped for, its pictures are bright. Really bright. Highlights of HDR images are delivered with much more genuine punch – and much less detail loss – than I’d have thought possible with such an affordable LCD projector. The brightness of HDR highlights is so intense, in fact, that it actually hides some of the greyness of dark areas, giving the impression of a better contrast ratio than the projector is truly delivering.

The HDR brightness gives colours lots of pop compared with pretty much any other projector at the HZ40’s price level. And this colour holds up better than usual if you ask the projector to fight against ambient light. 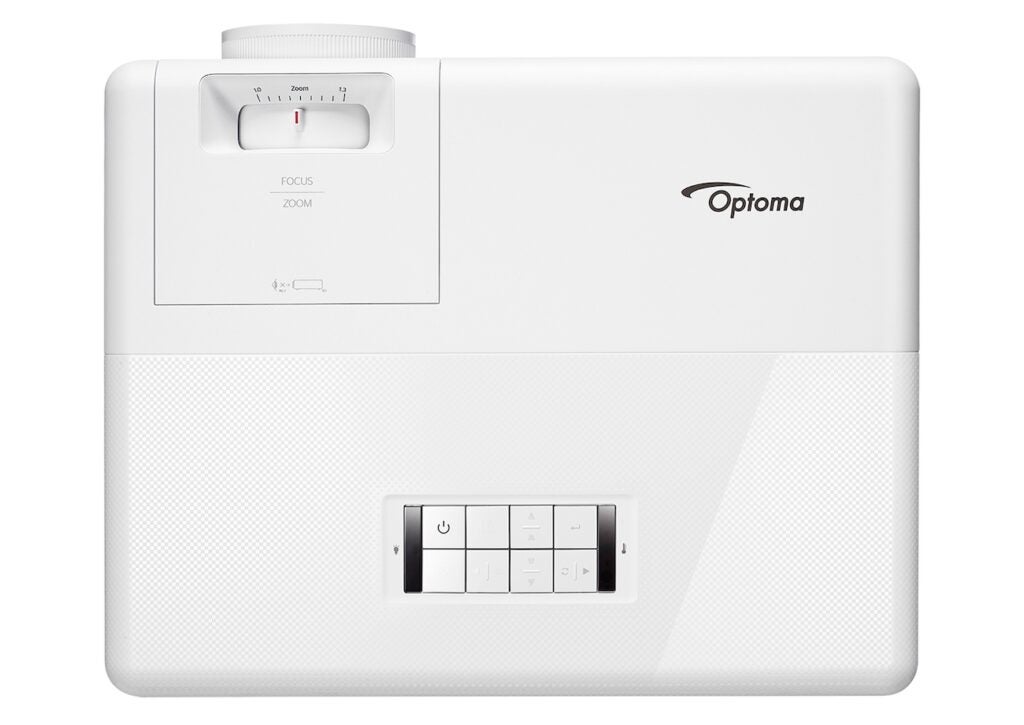 Despite the HZ40 really being a 1920 x 1080 projector with 4K pretensions, it really does deliver very sharp, detailed images with both 4K and HD sources. There’s no grittiness or artificiality to the intense sharpness, either. In fact, DLP technology’s reliance on mirrors helps it deliver all the detail without the slight sense of image structure sometimes visible with LCD projectors.

Laser projection again proves well suited to 3D. With a pair of old DLP Link glasses, the HZ40’s 3D pictures proved dynamic, bright, and impressively sharp. The latter strength is aided by pretty much no evidence of the ghosting noise lesser 3D projectors can cause. The inevitable dimming effect of the 3D glasses even improves the HZ40’s black level problems.

It’s back to the bad news, though, with the HZ40’s audio. The single 10W speaker just isn’t enough to project the sound far and wide enough to disguise the fact that it’s coming from a little box far removed from the screen. There’s painfully little bass in the mix, either, leaving soundtracks sounding almost laughably thin and inconsequential compared with the scale of the images they’re accompanying.

You should buy the Optoma HZ40 if…

It’s easy to set up and use, flexible in what it plays, and bright and colourful enough to take on ambient light and win

You shouldn’t buy the Optoma HZ40 if…

The sub-£1,500 projector world is crying out for a good laser model to cater for the often far from ideal (as in, not blacked out) room conditions casual projector users often want to watch sport or movies in. And the HZ40 isn’t quite that projector.

It’s also distractingly prone to rainbow interference, struggles with dark and SDR colours, and just doesn’t have enough flexibility in its laser lighting to compete with normal lamp models when you want a serious lights-off movie night.

Unless you’re absolutely certain you want a projector that’s bright enough to replace a TV and you really don’t care about never dimming the lights for film nights, you’re probably best thinking about a more conventional lamp projector. Something like the £1,299 LED-lit, DLP ViewSonic X10-4K or, if you know yourself to be susceptible to seeing DLP’s rainbow effect, Epson’s more expensive (£1,999) EH-TW7400.