The EH-LS500 moves Epson’s ultra short-throw laser proposition on from its LS100 predecessor, and makes an interesting alternative to a huge TV. Strong projector competition and the difficulties of getting good black levels from affordable laser light systems may limit its appeal, but to the right person its unusual combination of price and functionality will fit the bill perfectly.

The Epson EH-LS500 is an ultra short-throw LCD projector which, despite only costing £2,600 uses long-life laser lighting, supports both 4K and HDR playback, and is clearly aimed more at the living room than the boardroom.

As with most ultra short-throw projectors, the EH-LS500 looks a little awkward. Its main bodywork is just a chunky rectangle with a large lens protruding from the top edge, and a felt-covered front edge that houses built-in speakers. The rear side housing the connections sits so close to the wall that you don’t really see it.

The lens is designed to deliver image sizes of between 65 and 130-inches, from throw distances of just 0.4m to 0.82m. So you can easily leave the LS500 permanently on a sideboard ready to fire onto a wall or, ideally, screen. 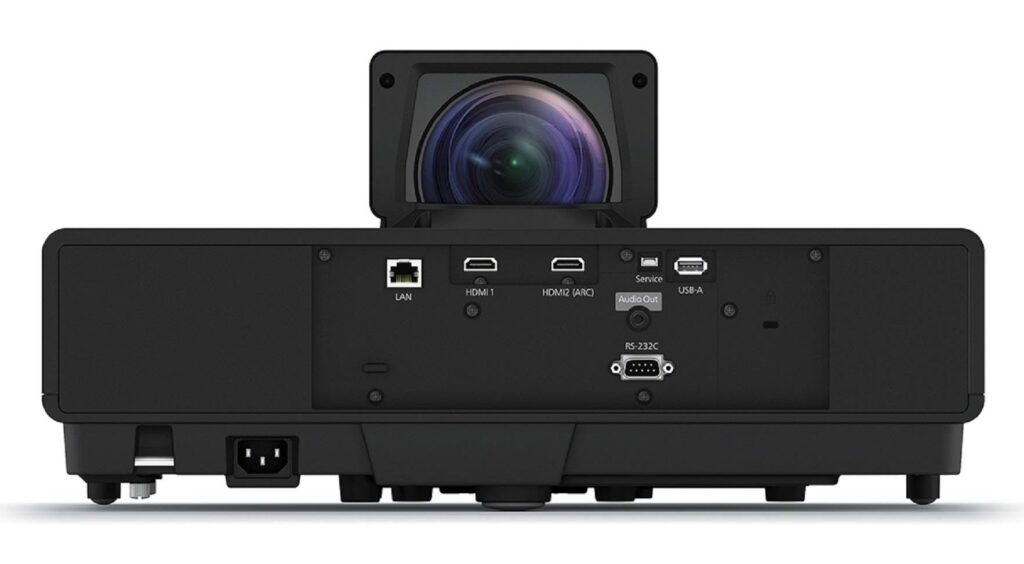 This view of the black Epson LS500 is scary.

While the LS500 might not be especially pretty, it is compact for an ultra short throw design. Its build quality is excellent, too.

The EH-LS500 is designed to make set up easy. Screw-down feet on the rear edge adjust its projection angle, and there’s a simple focus ‘slider’ behind the detachable speaker cover.

Vertical and horizontal keystone adjustments are on hand to get the edges of your image straight, while a helpful corner adjustment helps maintain uniformity right across the image.

The laser lighting is claimed to deliver a maximum light output of 4000 lumens. This is far more than you get from most home entertainment projectors, but important to a projector that clearly has ambitions of being bright enough to potentially replace a TV rather than just going into a blacked-out home cinema room.

The 4000 lumens brightness claim is accompanied by an even bigger contrast ratio claim of 2,500,000:1. This seems fanciful in any real world conditions, though, so let’s move swiftly on to something more realistic: a claimed laser life of 20,000 hours if you use the Eco lamp mode. That equates to around 10,000 films without any maintenance. You won’t see the sort of brightness and colour loss over the laser’s lifespan you get with lamp projectors, either.

Note that the laser warranty ‘only’ covers 12,000 hours, or five years. 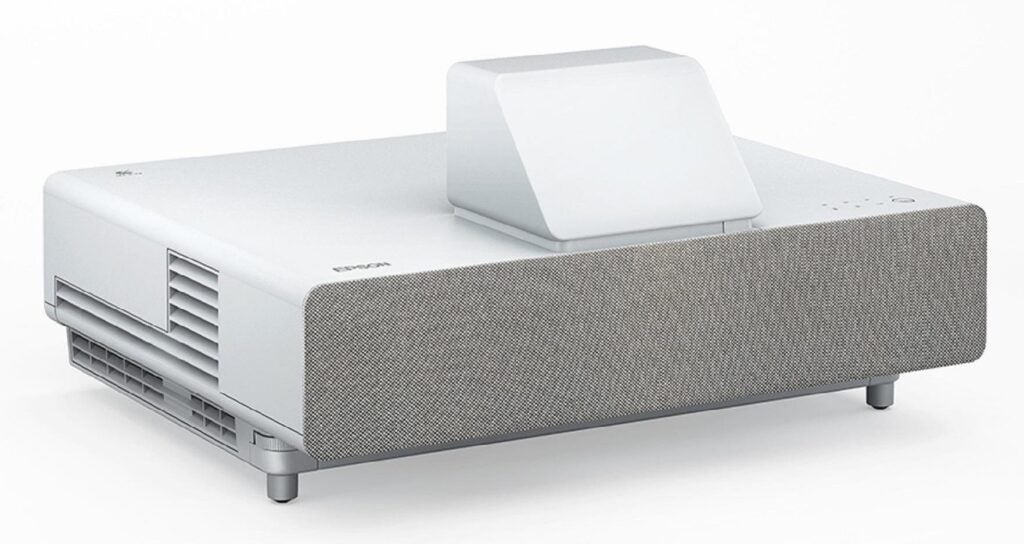 While its LS100 predecessor was 1080p only, the Epson EH-LS500 brings 4K support. It’s not a native 4K projector, though; it depends on ‘Pro-UHD 4K Enhanced Pixel Shifting’ technology. So it’s more a case of boosting pixel density rather than delivering ‘true’ pixel for pixel 4K detail. Epson has achieved HD-beating results with this technology before, though.

In fact, the Cinema mode reduces the laser light output to just 50% of its maximum, delivering 1200 lumens versus the 4000 lumen maximum. This raises hopes that this is one affordable laser projector that can truly adapt to dark as well as bright room viewing.

You can even increase the laser output in 5% increments. Though note that running noise increases exponentially when you up the laser output even by just 5% from the Cinema mode’s baseline setting. 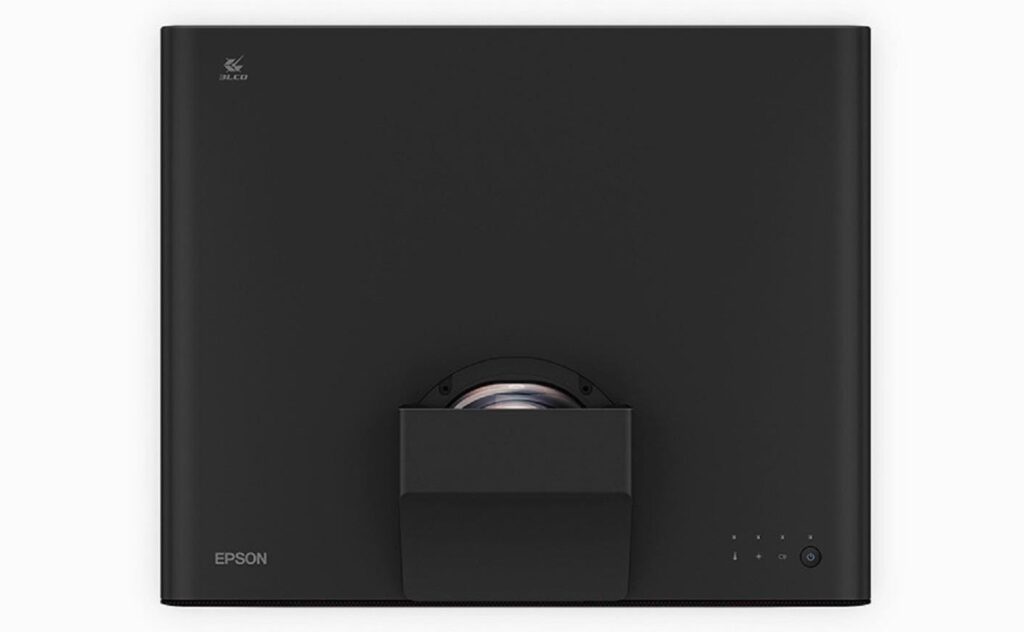 Another option worth tinkering with is the HDR10 Setting (as usual with projectors, there’s no Dolby Vision or HDR10+ support). This provides an admirably simple way of choosing your preferred balance between baseline brightness and light range in HDR images. So, for instance, you can choose to have a lower overall brightness but more detail in the brightest HDR areas, or a higher typical brightness level but less detailed brightness peaks.

Unlike any TVs these days, the EH-LS500 supports 3D using the full resolution active shutter approach. No glasses are included, though.

The built-in stereo speaker system delivers 2 x 10W of amplification, and connectivity impresses by providing three HDMIs when most projectors only offer two, and supporting powered streaming dongles such as a Roku TV or Amazon Fire TV sticks.

Epson recently introduced a version of the LS500 that provides built-in Android TV support. The standard LS500B I tested has no built-in ‘smarts’. Despite costing the same as the new Android model. So if you fancy the Android TV version, be careful you get the right one!

First impressions of the LS500’s pictures are strong, and show real progress over its LS100 predecessor. Particularly welcome is its handling of 4K sources, which look cleaner and crisper than HD did on the LS100. The level of sharpness and detail isn’t quite on a par with native 4K projectors, but the pixel shifting technology does make at least some difference, especially as you approach the LS500’s upper image size limit.

The ‘4K’ images don’t look unnatural or processed, either, and their clarity isn’t badly impacted by motion issues. A a motion processing system is provided, but you don’t need it. 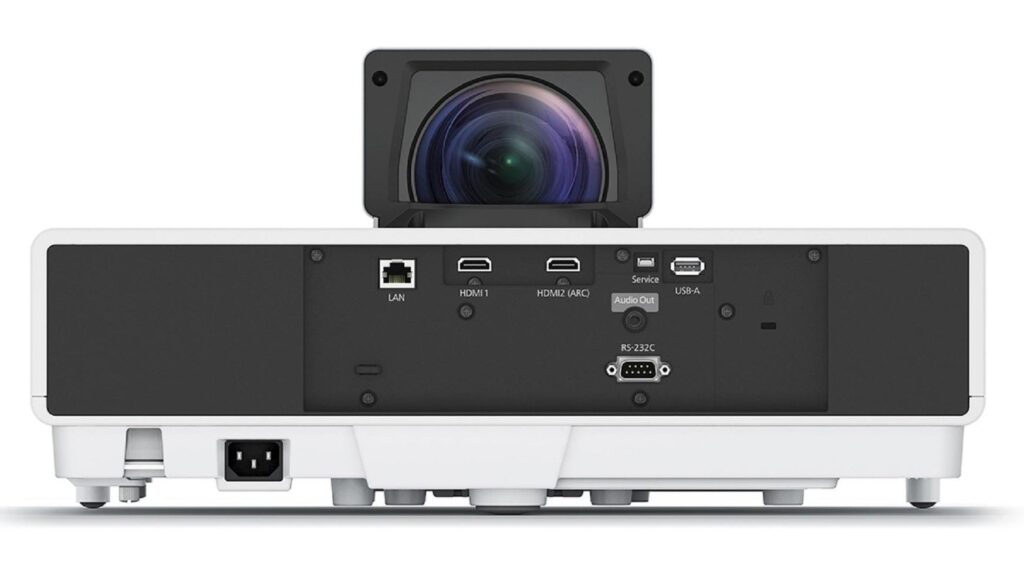 Rather scary lens-side view of the Epson LS500

There is a limit to the LS500’s 4K pedigree. Namely that the 4K Enhancement feature doesn’t make much difference to the look of native HD or SD sources. They still look at best HD – even with the projector’s separate Detail Enhancement and Super Resolution options added to the mix.

The Epson LS500’s colours are strong, too – where strong means impressive, not excessive. The laser-driven brightness at the projector’s heart delivers vibrant, dynamic saturations that hold up exceptionally well in bright rooms, and don’t feel bleached in even the very brightest areas.

There’s plenty of subtlety to accompany the colour flare, too. Blends look smooth and natural, and the fine shading contributes to the image’s sharpness. Best of all, skin tones look consistently realistic, avoiding the yellow or greenish undertone that frequently impacts laser projectors.

The LS500’s brightness helps it deliver a more potent sense of the difference between HDR and SDR sources than most projectors do. And finally in the plus column, since it uses LCD technology there’s no interference from the colour striping noise often seen with rival DLP-type projectors.

Unfortunately, though, the LS500’s impressive and in some circumstances helpful brightness also has a downside: average black levels.

Dark scenes tend to look grey where they should look black, and deep colours in dark areas can noticeably lose quite a bit of that natural, refined quality they have in bright areas. 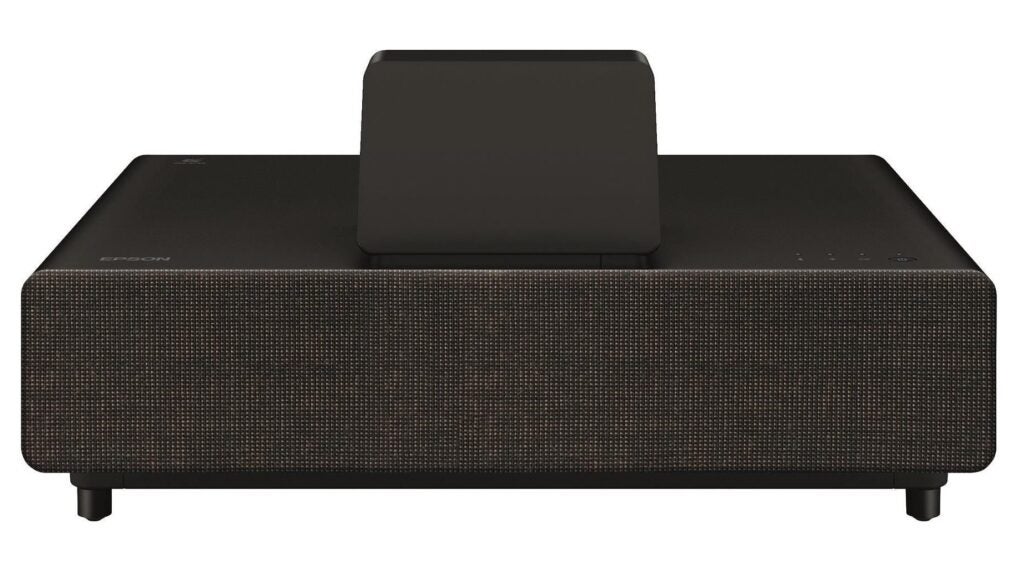 I expected the LS500’s black levels to be compromised when it was running at its brightest settings. But it’s a bigger compromise than I’d hoped for – even when the laser output is ramped down for Cinema mode. In fact, the greyness remains with standard dynamic range sources, despite these needing much less brightness.

The Dynamic Contrast feature helps a bit, enough that you should probably leave it permanently on. However, it can cause some flickering as the automatic light adjustment struggles to settle on the best setting for a particular scene.

Despite its black level shortcomings, the LS500 deserves to have us finish on a high. Or in this case, two.

First, 3D pictures are excellent: Detailed, bright, pretty much free of flicker and ghosting noise, rich in depth, and vibrantly coloured. Even black levels look better thanks to the natural darkening effect of the 3D glasses. Motion can look a little wishy washy, but otherwise this is as good a 3D performer as I’ve seen for anything less than stupid money. 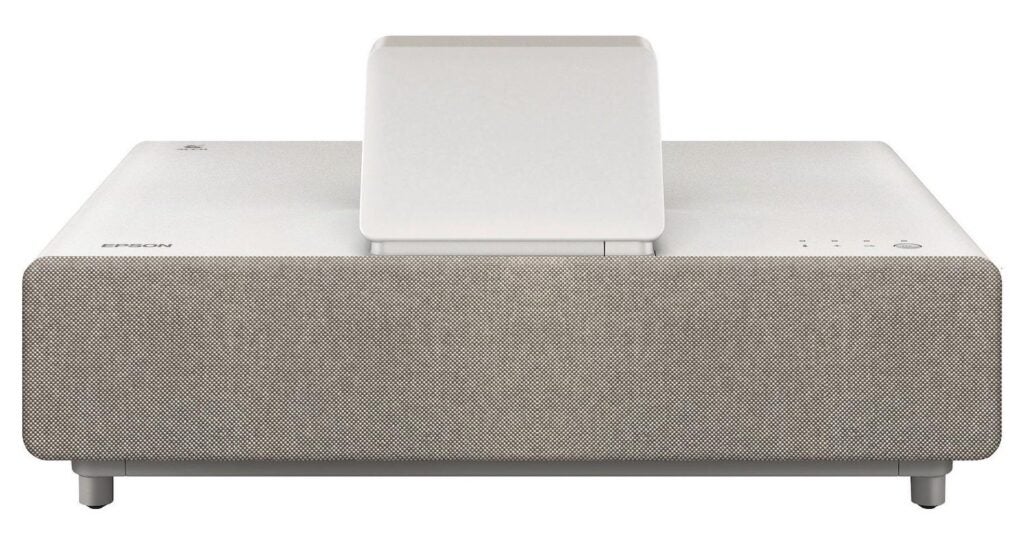 The white LS500 is the prettiest version with the lights on – but the black version ‘disappears’ better in the dark.

The LS500 also sounds much better than most projectors. Using a stereo rather than mono speaker set up unlocks plenty of detail, and the forward-facing speakers create a large and impactful soundstage. Also, since the projector sits close to your screen, its sound actually seems to be connected to the picture, rather than as if it’s coming from the opposite end of the room.

A slight reduction in clarity at high volumes, limited bass and the cooling noise you get outside of the basic Cinema preset may leave you craving an external audio system eventually. But it’s not an essential immediate purchase.

You should buy the Epson EH-LS500 if…

The LS500 is pretty specific in its appeal. If you’re thinking you’d like a monumental TV without the usual similarly colossal costs, then it’s definitely worth considering.

The LS500 stands up to ambient light, though I’d recommend combining it with an ambient light-resistant screen.

You shouldn’t buy the Epson EH-LS500 if…

If your budget can stretch further, LG’s £5,500 HU85LS is also an ultra short-throw laser model, but one which offers better black levels and built-in video streaming apps.

If you’re after a projector for more dedicated home cinema/movie night use, there are rival non-laser models that can deliver a more cinematic experience (especially where contrast is concerned). In fact, Epson itself makes a great example in the shape of the EH-TW9400.