The £950 Optoma GT5000 is a Full HD DLP projector with an ultra-short-throw lens system, capable of delivering a 100-inch picture when it’s placed just 30cm away from a wall or screen. Couple this with an unusually high 3,000 lumens of brightness, and you could be looking at the equivalent of truly mammoth TV for a fraction of the cost.

The GT5000’s rather industrial design doesn’t make for a particularly elegant addition to your living room. It looks more like something you’d see in a classroom or corporate meeting suite. With its bland rectangular shape, ribbed sides and the rather random-looking wedge cut into its top, it looks more like a printer than a projector. 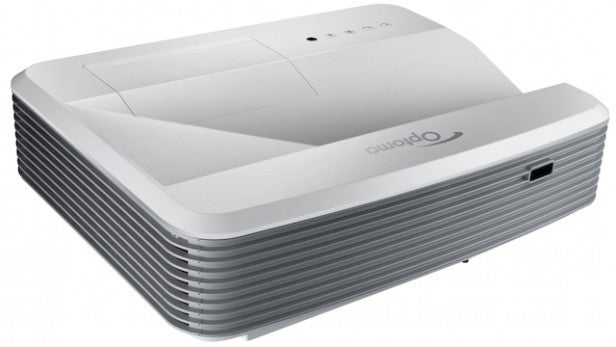 Its ultra-short-throw design, which bounces the image around an internal array of mirrors and lenses, means the GT5000 doesn’t even sport a lens. Instead, its images emerge through a narrow window built into one side of the top edge’s divot.

Not having a traditional lens means the GT5000 doesn’t provide the usual focus and zoom lens adjustments. The only way to adjust the size of its picture is to shift it backwards and forwards. Small movements of the projector translate into huge changes in the size of the image. You won’t  end up having to sit the projector more than 30-40cm from your screen, even if you have the wall space for a truly colossal picture.

Optoma stresses that you’ll need a completely flat surface to get a “perfect” image from the GT5000, so you should probably consider partnering it with a screen – rather than your wall, which is unlikely to be perfectly flat. 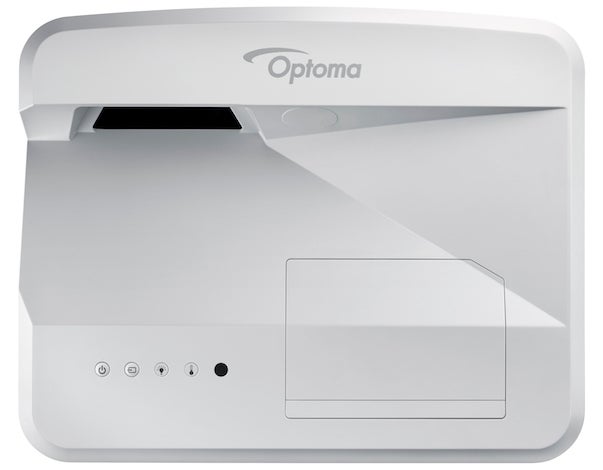 The GT5000’s connections are plentiful for a sub-£1,000 projector, with highlights of two HDMIs, two VGA ports, and a 12V trigger for firing up a motorised screen. A USB port lets you power video dongles such as the HDCast Pro and Google Chromecast. You can also add Optoma’s optional extra WHD200 system, which lets you stream audio and Full HD video wirelessly from pretty much any source.

Optoma is positioning the GT5000 as a home-entertainment projector, complete with a movie picture preset, video-friendly colour tuning and a low-latency video system to boost its video-gaming credentials. Its claimed contrast ratio of 23,000:1 raises hopes of movie-friendly black levels, too. However, the GT5000 can also potentially double up as a business presentations projector – there is a “Presentations” picture preset.

The GT5000 carries support for 3D although we weren’t provided with any 3D glasses, as is usual these days. In addition, as you’d expect of a projector with ambitions of replacing your TV, it features a built-in (16W) speaker system.

There’s no optical zoom or focus to worry about, but you may need to tinker with the provided digital image shift and keystone-correction tools to get the image in the perfect place on your screen. With this in mind, it would have been nice if the keystone system provided more subtle adjustments.

When it comes to the GT5000’s default picture settings, it’s definitely good to reduce the BrilliantColour option. Place it any higher than its “3” level and you’ll see bright parts of the picture begin to flare out and succumb to noise.

I’d also recommend adjusting the lamp output and colour settings depending on whether you’re watching the projector in a dark or light room. The “14” colour setting and “Bright” lamp setting that the GT5000 defaults to in Movie mode are both solid choices for viewing in ambient light. For dark-room viewing, you should reduce the colour to seven or eight and shift the lamp to its Eco or Eco+ setting.