Without close inspection, it isn’t easy to tell the OnePlus 6T and OnePlus 7 apart; they look remarkably similar in both design and (more importantly) size. As such, it’s not all that surprising that the newer 7 comes with an identically-sized battery to its predecessor.

There’s a 3700mAh cell inside the OnePlus 7, just as there was in the 6T; this in and of itself is no bad thing. In general usage, I was able to squeeze up to two days of use on a single charge without having to worry about reaching critical battery by the end of that second day – that’s pretty darn respectable.

A more robust metric may be screen-on time, which varied between four and four and a half hours per charge, based on usage. I was hoping that the optional dark mode built into the phone’s Oxygen OS user experience would help extend the 7’s life even further (as on the Asus ZenFone 6), however, switching it on didn’t really seem to make much of a difference, save for granting the UI an appealing new look.

30 minutes of gaming with the phone’s dedicated Fnatic mode engaged (which frees up processing and memory resources for better gaming performance) and the display set to 50% brightness, yielded a drain of 7% – a little higher than I was expecting but nothing to really give cause for concern. It still allows for hours of gameplay and enough charge left to keep using your phone for everything else you might want to do in an average day.

As for media playback over the same length of time, with the screen set to 70% brightness (perfect for outdoor viewing) only 6% charge was sapped up.

The other side of the story, which is particularly important where OnePlus phones are concerned, is charging. For the longest time, OnePlus’ once-named Dash Charge and now Fast Charge, operated as the gold-standard in fast-charging technology, partly thanks to its 20W (4A, 5V) rate of charge but also thanks to the safety systems it instigated – offloading any heat build-up that would typically take place on the phone itself and instead having it accumulate in the company’s specialised power adapter.

Nowadays, Fast Charge is starting to show its age, namely due to the fact that rivals have produced faster and more efficient alternatives. Oppo’s VOOC 3.0 charging technology, which features on its latest Reno series of phones, focuses on offering more efficient charging for those final few percent, where things typically have to slow down.

There’s also the matter of charging speed, with even more affordable phones, like the Moto G7 Plus offering faster 30W charging and other rival technologies, like Huawei’s top-spec SuperCharge tech clocking in at an impressive 40W.

For a while now, OnePlus has made use of the slogan ‘a day’s power in half an hour’ – catchy? Certainly. True? Only just, when looking at the 6T and 7. 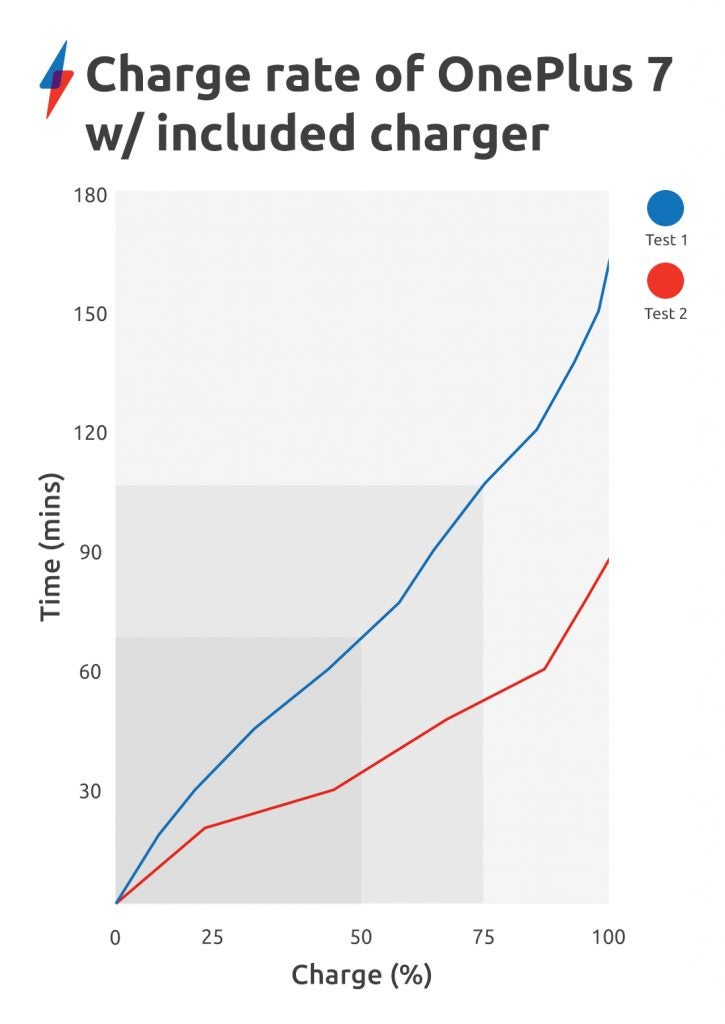 The 3700mAh battery capacity means the sell has a tough time reaching 50% charge in just 30 minutes, usually making it to 47-48% in reality. This should get most users through a day of casual smartphone use, including some video streaming, web browsing and music playback, but it really does push OnePlus’ slogan to the limit.

As for recharging, my initial test threw a real curveball, with the phone taking almost three hours to fully replenish. Concerned, I closely monitored subsequent charge times and thankfully, that original run (Test 1) appeared to be erroneous. Every test that followed (Test 2) filled the OnePlus 7 to 47% after 30 minutes, 86% after an hour and resulted in a fully-charged device after almost exactly an hour and a half.

With the company’s own 30W Warp Charge tech now available on the OnePlus 6T McLaren edition and the OnePlus 7 Pro, it’s a shame that they chose to omit it from the standard OnePlus 7’s spec sheet, as it would have served as a more worthwhile differentiator and competitive aspect of the phone compared to its predecessor and the current market competition.