Despite being the third in the series of Pirate Warrior games, One Piece: Pirate Warriors 3 is the most accessible of the bunch. Even more so if, like me, you’re fairly new to the One Piece world. It comes to the Nintendo Switch in the form of a new and slightly bulkier Deluxe Edition, and is a further reminder that the Switch is rich in Musou/Warriors games.

Like other Musou games, One Piece: Pirate Warriors 3 is all about hacking and slashing your way through waves of enemies on a battlefield. It’s a formula that’s worked brilliantly for Omega Force and Bandai Namco over the years, and it’s no different here. Combining Musou gameplay with the quirky universe of One Piece, you’re in for a suitably crazy yet mostly smile-inducing experience – even if you’ve played it before.

Given the anime and manga on which it’s based, you’d be forgiven for expecting the storyline to be almost impossible to fathom if you’re new to the premise. Its source material covers more than 800 episodes of anime and counting. Fortunately, this game works as an introduction to the series, while still providing interesting insight for fans, across a respectable 12-15 hours. 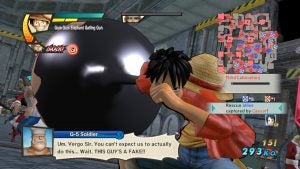 The crux of the story has you vying to gather a crew of pirates in a bid to track down the ultimate treasure, known as One Piece – but there’s so much more going on too. For the newbie, there’s a lot to take in, but it’s rarely intimidating. For fans, at times it’s almost too brief, but there is the benefit of stories taking slightly different turns.

Battles follow a typical Warriors-style format. Each level consists of a hefty battlefield, a small mini-map, and numerous fast-changing objectives. Oftentimes, capturing key locations or beating up an important enemy is all that’s needed to move you onto the next task.

Along the way are literally hundreds of enemies – faceless soldier clones – that, impressively, the Switch does a fine job of displaying. There’s no slowdown to be seen, even when undocked. The trade-off is that characters are a little fuzzily displayed and the lack of anti-aliasing may be an issue if you’re used to the PS4 version’s processing power.

It’s simple stuff at heart, but whack it on a moderate or harder difficulty level and there’s still a challenge to be had when it comes to taking on the countless enemies coming at you. This is a game where it isn’t uncommon to complete a level having defeated over 3000 enemies. 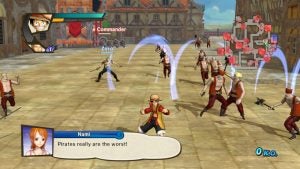 Easy-to-learn controls suggest that combat is basic, but that’s far from the truth once you step back from the game’s early button-mashing. A mixture of light and heavy attacks dictate pretty much everything, with a combination of these allowing you to inflict special attacks and moves that cause even more damage. With nearly 40 playable characters, and each having numerous combo moves, options are plentiful. Button-mashing might work on Easy but you’ll suffer for it any higher up.

There’s also the introduction of new features such as Kizuna Rush, which adds a little more tactical edge to the experience. A form of combo move, it has you summoning another character alongside you to perform a powerful special attack. In some instances it’s possible to summon more than one of your crew to back you up. That means huge combo moves that can easily kill hundreds of enemies at once, while also offering a sense of camaraderie that’s rarely seen in other Warriors games.

In each case, different characters mean a different set of moves, making it initially satisfying to see how things change. On higher difficulty levels, it can make a substantial difference to your chances of success too.

As with any Warriors game, inevitably gameplay becomes repetitive. Each level might only be about 20 minutes long at most, but if you play too many in a row, you’ll find the experience less about stress relief and more about ‘oh no – not another samey area to capture again?!’.

One Piece: Pirate Warriors 3 tries to mix things up by constantly offering you rewards. These can be as simple as the main storyline’s Treasure Events – special cut-scenes triggered by completing certain conditions – or as varied as the game’s separate Dream Log mode. The latter has you competing in a form of semi-randomised gauntlet mode, thereby earning new items and characters as you progress. 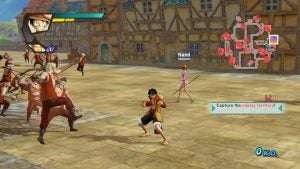 There are light RPG elements, too, in the form of coins obtained during battle, before influencing how your characters grow and develop. It isn’t as complex as Bandai Namco’s earlier forays into RPG such as the Empires series or Bladestorm, but for a Warriors game it goes some way to helping you feel like you’re forging your own path.

The Deluxe Edition adds over 40 pieces of DLC, which are essentially extra storylines to pursue. For the completionist, it’s ideal fodder for learning more about the One Piece world. New costumes further add to what you can unlock through this enhanced edition.

The Switch version also supports local co-op using single Joy-Cons, as well as with extra controllers, so it’s great for an unplanned co-op session – even if the camera proves more difficult to control this way. Predictably, it’s a ton of fun playing alongside someone else, and you’ll soon look past any potential issues with repetition here.

Like great magic tricks, you know exactly what it’s doing, but you’ll be wrapped up in the experience sufficiently that you won’t really care that this is a typical Warriors game with a fun One Piece skin on top. 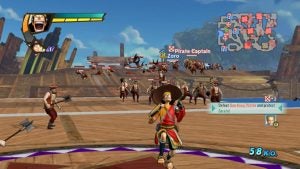 One Piece: Pirate Warriors 3 is a game you’ve played before, but it’s a blast nonetheless. The anime’s outlandish storyline ties together neatly with the hectic fun of a Musou game, ensuring this is an appealing and meaty package. It’s just a shame it doesn’t take more risks with the tried-and-tested formula.