It’s much better late than never for Microsoft

Office for iPad.
Will they? Won’t they? Should they? Could they? Why haven’t they?
They’re stupid, they are. It’s been a topic with no shortage of
opinions. Microsoft finally put all that to bed when it finally
announced, and released, the three Office of iPad apps and Microsoft
Office Mobile.

We’ll be publishing a full review of the apps
once we’ve spent more time with them, but until then here are my first
impressions based on a few hours of tinkering on an iPad Air.

First,
however, a little housekeeping. Office for iPad isn’t a single app, but
three separate apps for Word, Excel and PowerPoint. The Office Mobile
app, meanwhile, is a far more limited offering purely for the iPhone.
All are available for free, but what you can do with the free versions
is severely limited.

Put simply, in the free versions you can
only view and not edit documents. This makes them useful for checking
documents you’ve been sent or shared with you, but not much more. To
get more, you’ll need an Office 365 subscription.

Office 365 is
effectively how Microsoft intends to sell Office in the future.
Instead of paying a one-off price, you pay a month subscription based on
your needs. For example, a Home Premium subscription costs £7.99 a
month (£79.99 per year) and gives you five PC or Mac installs and
supports up to 5 tablets as well – each account also gets an additional
20GB of SkyDrive support.

You can buy an Office 365 subscription as an in-app purchase, or get it online via Office 365 website. 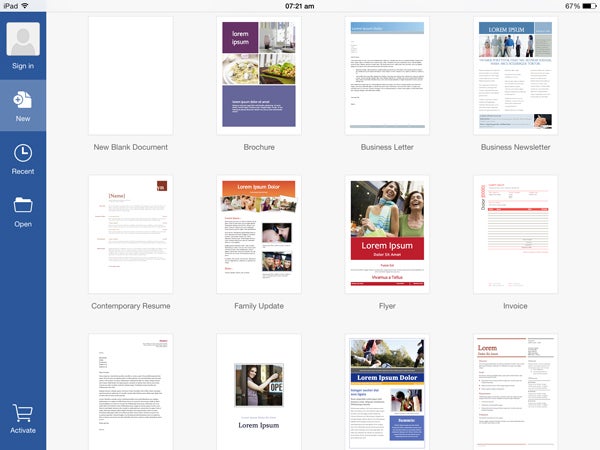 As
a journalist, I’ve become very familiar with Word over the years, even if I
only use a small percentage of the features it offers. Indeed, I’m sure
I’m with the majority here that only ever use that small percentage.
Office as a whole serves a broad church, from people writing articles to
researchers and professionals. Everyone needs something slightly
different.

Word on the iPad has pretty much everything that 95%
of the Word using population needs, and on first inspection it does
this extremely well.

It adopts the familiar Ribbon-style UI,
albeit a slightly slimmed down version compared to the desktop apps.
Some people are rather sniffy about the Ribbon, but I’ve always liked it
and it works very well here.

All the basic formatting options
are here, including pre-defined styles that you can apply. You can’t
create your own as in for Word packages, but they’re useful all the
same. Some more advanced formatting options are present, too, such as
Text Effects. There’s enough here that you can make a document from
scratch and not look too generic. 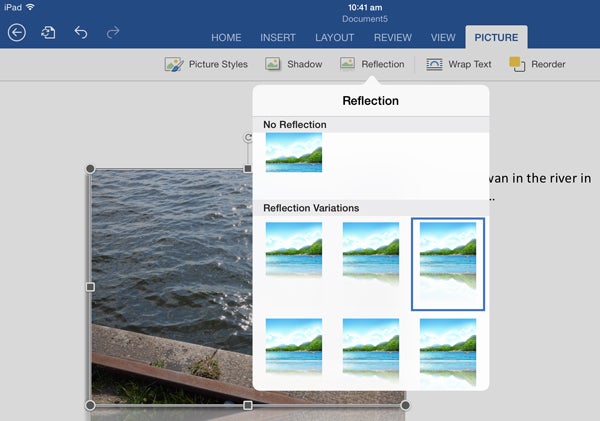 Particularly
impressive are the picture insertion options, which are comprehensive.
You can apply shadows, add borders, create reflections and plenty else
besides. You can also add basic tables, shapes, separate text boxes and
add heading and footers.

My personal favourite feature,
however, (and I’m a little biased here given my day job) is the support for track
changes. It works perfectly and is by far the best such implementation
I’ve seen from an ‘Office compatible’ app. 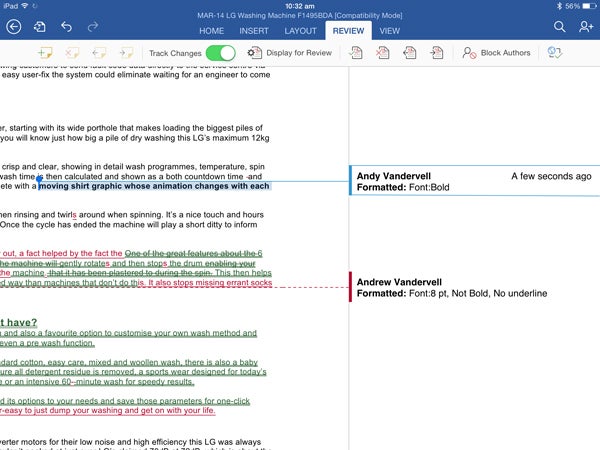 Performance,
meanwhile, is seamless. I’ve experience now annoying slow downs when
writing, even when adding images and more complex items. I haven’t tried
the collaboration features just yet, but Word on iPad supports this and
it should prove very useful.

My only real criticism so far is
that unlike a great many iPad writing apps, Word for iPad doesn’t have a
‘focus’ mode that ensures the section you’re working on remains at the
centre of your view. Unless you consciously scroll the page up, you’ll
end staring right at the bottom edge of the screen.

It’s a small convenience feature Microsoft would do well to copy, but on first inspection Word for iPad is a triumph. 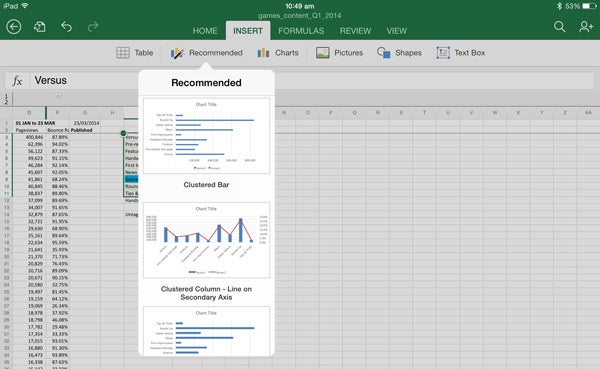 I
am, by no means, an Excel expert, but I work with a few people who
are. You’re never going to perform serious spreadsheet wrangling on an
iPad, but Excel for iPad appears to handle even quite complex
spreadsheets very well and offers enough options to make amendments to
make it useful.

I loaded up a selection of sheets chock full of
numbers, charts and formulas and it barely missed a beat. The iPad
version supports every conceivable (to my eyes) formula that Excel
supports, and can handle complex graphics that have been created in the
desktop version of Excel. All the basic functions you’d expect (adding
and editing cells etc.) are there, too. You can also create charts and
there are plenty of options to add styles, though some of the editing
options here are more limited.

In comparison to Word, though,
there are few interface gremlins worth noting. Excel for iPad does a
fine job of supporting grouped cells, which you can expand and collapse
as required, but the icons for enabling them are so small that you have
to zoom in to access them. This is also true of changing the title of
embedded charts.

With all this said, however, it’s very
impressive how even very large spreadsheets with multiple sheets,
graphics and formulas work fine and the performance is consistently fast
and responsive. Clearly Apple’s A7 processor is doing the business
here, though it would be interesting to see if older iPads cope as well –
all the Office apps require iOS 7, but even the aged iPad 2 supports
it. 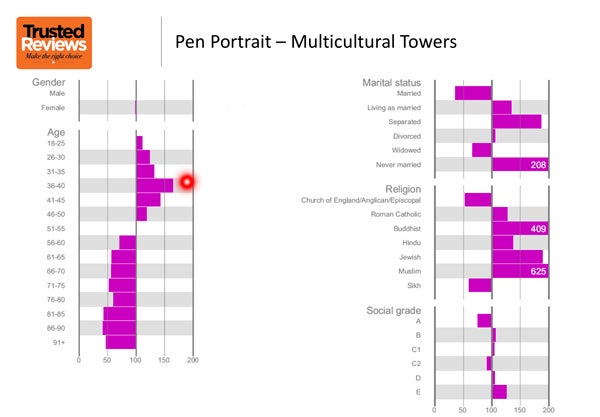 PowerPoint
gains one important free feature in that you can use it to present. I
assume this works correctly using AirPlay or via a video-out cable, but I
haven’t been able to test this properly yet. The presenting mode adds a
few neat features, though, ones which I think will become firm
favourites for anyone who presents often.

First is the laser
pointer mode. Simply hold your finger on the slide you’re presenting and
a virtual pointer appears on-screen, letting you draw attention to
specific points. If this isn’t obvious enough you can also draw on the
slide, or use a highlighter. These remain until they’re cleared off.
It’s all very neat. 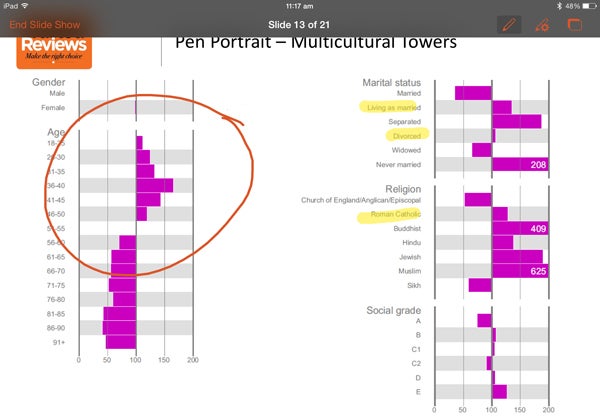 The
basic formatting options are pretty much the same as in the Word app,
so I won’t go over old ground there. The difference, of course, is it
add options for editing and creating slides and transitions.

Like
Word, the options are basically ‘just enough’ and appropriate for what
you really want to do on an iPad. You can create new slides using
templates, add photos and create transitions. One thing you can’t do,
however, is create specific ‘reveals’ within each slide – i.e. add a
secondary transition before moving to the next. It supports this in
presentation mode for existing presentations, but you can’t create these
in the app on the fly.

Office for iPad: OneDrive or Nothing

The first most people will
notice about the Office apps is that they only support OneDrive (formerly
SkyDrive). There’s no support for Dropbox, iCloud or any
other non-Microsoft cloud service.

Disappointing as this is for
many people, it’s hard to argue with the cold logic from Microsoft’s
point of view. Moreover, if you’re committing to spending £7.99 a month
on an Office 365 subscription, it makes a great deal of sense to use
Microsoft’s OneDrive service. It’s a very good service, particularly if
you use a Windows PC as your day-to-day PC.

The only more
serious irritation, in my eyes, is there’s no option to open documents
in another app. This is normally a useful way to save something in
Dropbox (or any other service) from an app that doesn’t support it, but
Microsoft has locked this out.

This also means, incidentally, that
you can’t open a document in an Office for iPad app and then open it in
another editing app. I imagine this is deliberate on Microsoft’s part to
encourage people to pay for the subscription, and I can’t really blame
it for that.

As
noted elsewhere, performance on the iPad Air across all three apps is
excellent. I will be firing up an iPad 2 at some point to see if it can
handle things as smoothly, but recent iPad owners should have no
concerns on this front.

One other neat point is the fact that,
despite the iPad apps being three separate apps, once you sign-in to
your Office 365 / OneDrive account in one you’re automatically signed-in
for all three. It’s a small but appreciated point. 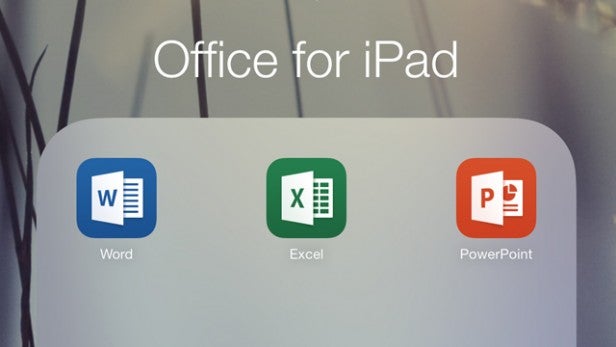 I
haven’t used Office for iPad long enough to give it a final verdict,
particularly in the context of how it compares to other options (free and paid-for) available right now. My first reaction, however, is that these are very
polished and useful apps that make a very compelling case. Certainly any
existing Office 365 subscriber should get hold of them right now:
there’s no good reason not to. I’d even go so far as to say I prefer
using these apps to using the ‘full’ version of Office supplied with the
Surface 2. As a tablet experience, it’s very pleasing indeed.

Next, see our pick of the best iPad games